Elon Musk’s efforts to arrange new financing that will limit his cash contribution to his $44 billion acquisition of Twitter Inc have been put on hold because of the uncertainty surrounding the deal, people familiar with the matter said.

Musk has been threatening to walk away from the deal unless the social media company provides him with data to back up its estimate that false or spam accounts comprise less than five percent of its user base. This culminated in a letter from Musk’s lawyers to Twitter on Monday warning he may walk away unless more information is forthcoming.

Musk is on the hook to pay $33.5 billion in cash to fund the deal after arranging debt financing to cover the rest.

His liquidity is limited given that his wealth, which is pegged by Forbes at $218 billion, is largely tied to the shares of Tesla Inc, the electric car maker he leads.

Elon Musk’s efforts to arrange new financing that will limit his cash contribution to his $44 billion acquisition of Twitter have been put on hold because of the uncertainty surrounding the deal, people familiar with the matter said 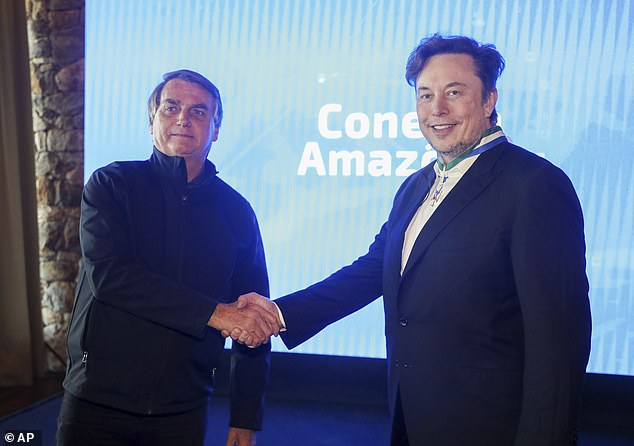 Musk is seen on May 20, visiting Brazil to discuss expanding his Starlink internet service into the Amazon 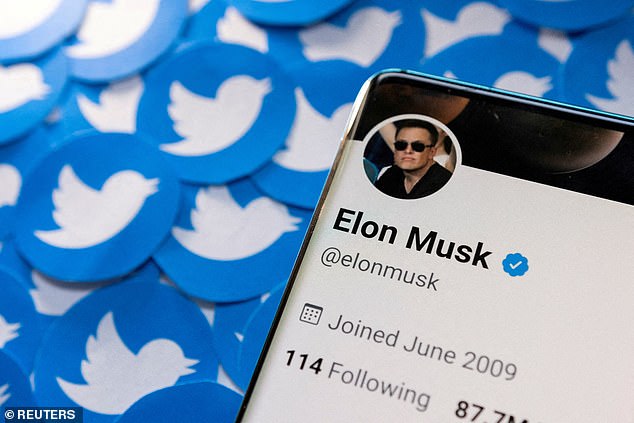 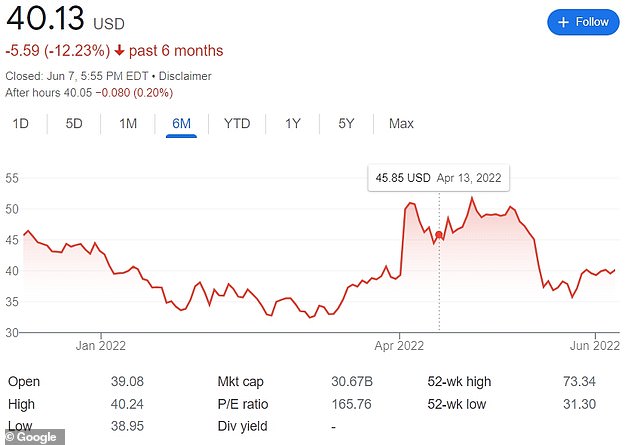 Twitter’s share price was at $45.85 on the day Musk’s takeover was announced. Since then it has been on a rollercoaster ride, but is now down to $40.13 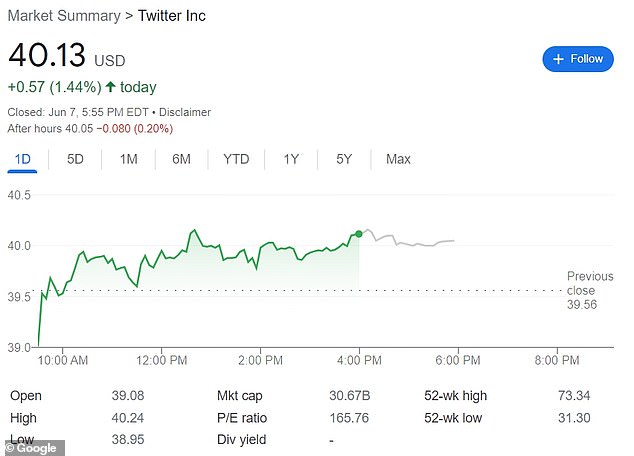 The company’s stock closed up 1.44 percent on Tuesday, on news of Musk’s struggles

Musk has been in discussions to arrange $2 billion to $3 billion in preferred equity financing from a group of private equity firms led by Apollo Global Management Inc that would further reduce his cash contribution, according to the sources.

These conversations are now on hold until there is clarity about the future of the acquisition, one of the sources said.

The pause in financing activities offers the first clear sign that Musk’s threats are interfering with steps that would help complete the deal.

Twitter has insisted thus far that Musk has been performing his obligation under their contract, including helping to secure regulatory approval for the deal.

Musk sold $8.5 billion worth of Tesla shares in April after he signed his deal to buy Twitter, and it is not clear how much cash he has available to meet his obligation.

He has raised $7.1 billion from a group of equity co-investors to reduce his contribution.

Musk also sought to reduce this exposure further by arranging a risky $12.5 billion margin loan tied to the shares of Tesla, but then scrapped it last month.

Preferred equity would pay a fixed dividend from Twitter, in the same way that a bond or a loan pays regular interest but would appreciate in line with the equity value of the company.

The deal uncertainty has also weighed on the plans of banks to get $13 billion of debt they have committed to the acquisition off their books through syndication.

While still preparing to syndicate the debt, the banks plan to wait until there is clarity on the deal to launch the process, the sources said.

The banks do not believe credit investors will buy into the debt as long as the uncertainty lingers, the sources said.

The banks have also found Musk’s disparaging public comments about the company unhelpful, and were hoping he would be helping them by now with investor presentations to syndicate the deal, the sources added.

To be sure, the halt of these activities does not affect the commitments made by Musk and the banks to fund the deal. Twitter can take them to court to force them to comply with their financing obligations under the deal contract if they come short.

The syndication of the debt could emerge as a major issue for the banks were Musk’s dispute with Twitter to escalate in litigation and they were forced by a judge to fund the deal.

In that scenario, they could struggle to get investors to buy the debt if Musk were unwilling to own the company.

That possibility, however, is seen as remote.

Most investors are trading Twitter’s stock on the assumption it is far more likely for the company to reach a settlement with Musk or let him walk away, rather than go through protracted litigation.

Texas Attorney General Ken Paxton also revealed on Monday that he was launching an investigation into Twitter for ‘potentially misleading Texans on the number of its ‘bot’ users.’

Paxton argued he has a duty to protect Texans from the company if it is indeed misrepresenting bot data in an effort to drive up revenue.

The bot problem also reflects a longtime fixation for Musk. In April he promised to ‘defeat the spam bots or die trying’

Musk became a resident of Texas in December 2020.

The social media network claimed earlier in the spam account battle it had submitted all necessary details but Musk dismissed it as just the methodology on finding bots.

Monday’s filing is not the first time Musk has threatened to pull the blockbuster deal, with it being ‘temporarily put on hold’ last month while he looked into fake accounts.

He claimed spam bots could make up at least half of Twitter’s users, which is more than 10 times the company’s official estimate.

He also tweeted last month he ‘cannot move forward’ with the purchase until he is provided the requested data.

Meanwhile Musk’s other ventures – SpaceX and Tesla – have been battered by his Twitter acquisition, with stocks plummeting amid fears he cannot juggle the work.