Twitter shares rose last night as the battle over the future of the social media site intensified.

The tech giant’s stock jumped 5 per cent to around $48 during trading after a weekend of mudslinging that saw Tesla chief executive Elon Musk step up his efforts to buy the company.

Musk stunned both Wall Street and Silicon Valley last week when he swooped on the social media group with a £31billion takeover offer.

The world’s richest man launched his hostile bid after building up a stake of more than 9 per cent in the firm.

Twitter’s board hit back at the $54.20 a share offer and the company launched a major defence on Friday.

But Musk, 50, doubled down over the weekend, opening talks with potential co-investors that are thought to include private equity group Silver Lake.

And yesterday he took aim again at the company’s top team, using a tweet to say he would not pay board members a penny if his takeover was successful.

In response to another tweet which discussed how Twitter board members receive up to £230,000 a year for a ‘part-time’ job, Musk said: ‘Board salary will be $0 if my bid succeeds.’

He added that cutting those payments could save the company around £2million a year. A day before, he published a cryptic post on the site that said: ‘Love Me Tender.’

Although this could have been a reference to the Elvis Presley song, analysts quickly said it could mean that Musk is planning to launch a tender offer. 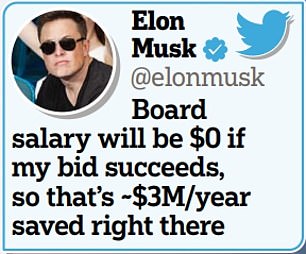 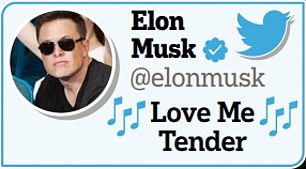 This would see him directly ask shareholders if they would like to sell their shares to him for his offer price. The indication that he is considering a tender offer follows a defence strategy deployed by the board to thwart his efforts.

This defence, known as a ‘poison pill’, means that if the Tesla tycoon takes his stake in Twitter above 15 per cent, it will flood the market with new shares – offering them to existing holders at a heavy discount.

This method, devised by law firms in the 1980s to protect companies from corporate raiders, will prevent Musk from being able to buy a majority stake without the board’s approval.

But Musk is reportedly considering teaming up with other bidders, who could each take stakes worth just under 15 per cent and gain overall control of Twitter.

Former SEC chairman Harvey Pitt slammed Twitter’s board and said it would give it an ‘F’ for the way it has handled the situation. He said: ‘I believe under the circumstances, they needed to check out whether this was a real bid.’