Elon Musk’s takeover of Twitter has many hoping for a better future for the social media giant.

Beset by a lacklustre share price performance, several major investors swung behind Musk, the world’s richest man, when he came knocking with a £35bn offer earlier this month.

The 50-year-old’s bid was priced at $54.20 per share and despite initial resistance, which sparked speculation of a hostile takeover, Twitter’s board soon folded and backed the billionaire maverick.

Backing: Several major investors swung behind Musk, the world’s richest man (pictured), when he came knocking on Twitter’s door with a £35bn offer

With total control of the site beckoning, he said he wanted to make Twitter ‘better than ever’ by adding features and restoring ‘trust’ in the platform.

How he plans to execute his strategy remains unclear, but given a stated commitment to ‘free speech’, Musk’s takeover has raised concerns about a surge in abusive content and potentially put him on a collision course with regulators.

But how did it get to this point?

Twitter’s shares have had a torrid time of late and more than halved in value between March last year and March this year before Musk arrived on the shareholder register with a 9 per cent stake – setting the scene for his audacious takeover.

The website is free and makes money from adverts in a similar manner to Google and Facebook.

However, Twitter’s user base is comparatively small, meaning it has fewer eyeballs to tempt advertisers.

In the final quarter of last year, the company reported an average of 217million daily active users, a figure dwarfed by the 1.9billion that used Facebook over the same period. Recent plunges in the value of several technology stocks, notably Facebook’s owner Meta and Netflix, have added to the company’s woes.

The rapid capitulation of Twitter’s board suggested several major shareholders thought taking the company private was a better option than risking it on the public markets. Musk also secured the backing of Twitter’s co-founder Jack Dorsey.

So what exactly will Musk do once he takes full control? While a formal strategy has not been laid out, the South African-born businessman previously pushed for the company to adopt a subscription model and add extra features such as an edit button to attract users.

He has also pledged to crack down on spam bots, automated accounts that are often used to spread misinformation. Musk said he wants to ‘increase trust’ in the platform and make Twitter ‘the digital town square where matters vital to the future of humanity are debated’.

The last part has been interpreted to mean he will relax the site’s moderation rules after it was accused of censoring conservative viewpoints, with the banning of Donald Trump held up as an example. 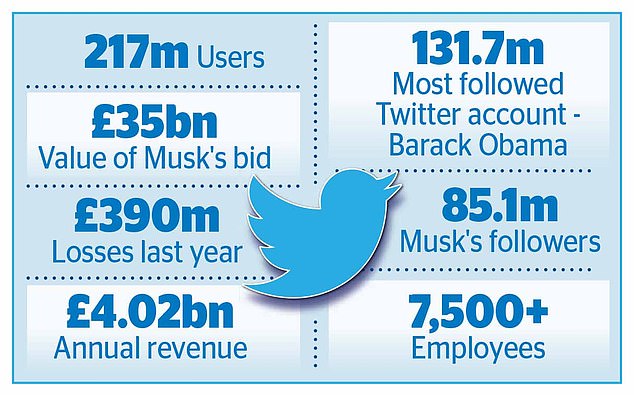 Struggles: Twitter’s shares more than halved in value between March last year and March this year before Musk arrived on the shareholder register with a 9% stake

However, with Musk’s self-professed commitment to free speech, there is speculation Trump could return, while politicians and charities have voiced concerns such moves could cause toxic and abusive behaviour to increase.

Additionally, he could find himself on a collision course with regulators on both sides of the Atlantic as they move to crack down on hate speech and misinformation.

He also faces a potential headache from the UK’s new Online Safety Bill, which if it enters into law later this year will require internet platforms to police abuse such as racism or bullying, setting Musk up for a showdown with Culture Secretary Nadine Dorries.

The ‘secret’ wealth manager behind a very public tycoon

Elon Musk, infamous for his cryptic tweets and constant social media presence, is hardly the most private billionaire.

But the family office which manages his massive wealth is shrouded in secrecy.

Excession is based in Austin, Texas. Former Morgan Stanley banker Jared Birchall is the man in charge. Unusually for the head of a family office, Birchall also holds a multitude of other roles across Musk’s empire.

He was hired by the Tesla front-man in 2016, and is chief executive of Musk’s brain chip firm Neuralink, a director at his tunnelling firm the Boring Company and a board member of his philanthropic private foundation.

And court documents revealed it was Birchall who hired an investigator to probe the diver who Musk called ‘paedo guy’ in an ill-judged fit of pique during the mission to rescue a trapped boys’ football team in Thailand.

Birchall’s contacts with Morgan Stanley have also proved to be useful to Musk. The Wall Street bank has led the financing package which lies behind Musk’s bid for Twitter, and advised him on the deal.

When Musk initially tried to take Tesla off the stock market in 2018, he tweeted that Goldman Sachs and Silver Lake would manage the bid.

But court documents showed Birchall urging Musk to use Morgan Stanley too. ‘They’ve been our best resource on the personal side, by far,’ the banker messaged.

Birchall, born in 1974, began his career with Goldman Sachs before joining Merrill Lynch, according to his Linkedin profile.

After around a decade, he was dismissed from Merrill Lynch for ‘conduct resulting in management’s loss of confidence’, according to Financial Industry Regulatory Authority records. But less than a month later he was taken on by Morgan Stanley.