Many musical theater fans were left fuming at the casting of an off-Broadway revival of the classic show Little Shop Of Horrors.

Euphoria actress Maude Apatow, the daughter of Judd Apatow and Leslie Mann, is making her onstage debut as the leading lady Audrey.

When the announcement appeared on Playbill’s Instagram account, the comments were filled with scathing remarks alleging she was hired because of nepotism.

One Instagram user declared the onset of ‘nepo baby season’ as another quoted stage legend Patti LuPone: ‘Broadway is becoming a Disneyland for the rich.’

‘Nepo baby strikes again,’ one commenter sneered as another quipped: ‘I had to double check this wasn’t a meme,’ and still another wrote: ‘you’re joking right’.

‘Oh good, I was worried someone who worked for the part might get it,’ a social media commentator deadpanned.

Another sneered: ‘nice to see nepo babies thriving when so many can’t get a job,’ and yet another noted: ‘stunt casting AND nepo baby.’ 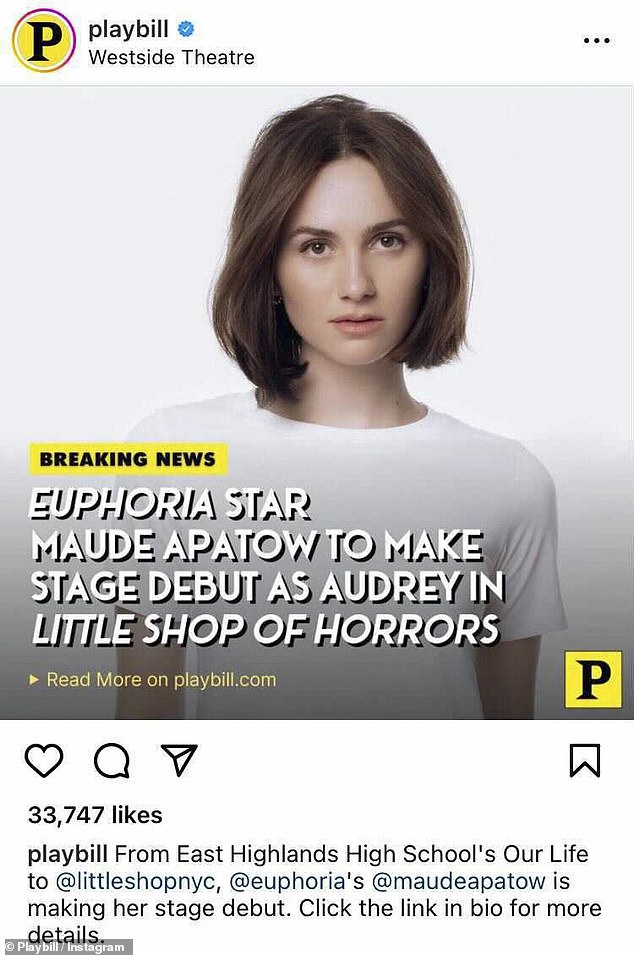 Incoming: Maude, who has already acted on the hit show Euphoria, is making her onstage debut in an off-Broadway revival of the classic musical Little Shop Of Horrors

‘Whyyyyy is this the choice?!?’ an Instagram commenter wondered as a young actress wrote exasperatedly: ‘Yeah lemme just rip up my degree.’

‘Can she even…. you know what, never mind,’ one social media user groused in the comments. ‘Forget I almost asked.’

Maude had a smattering of defenders too, including one who argued that casting a TV personality was helping ‘the entire cast and crew’ to ‘keep their jobs a little while longer. It’s never really just about one person.’

Broadway has a long history of welcoming showbiz legacies, from the famous Barrymore acting dynasty including John, Ethel and Lionel on down. 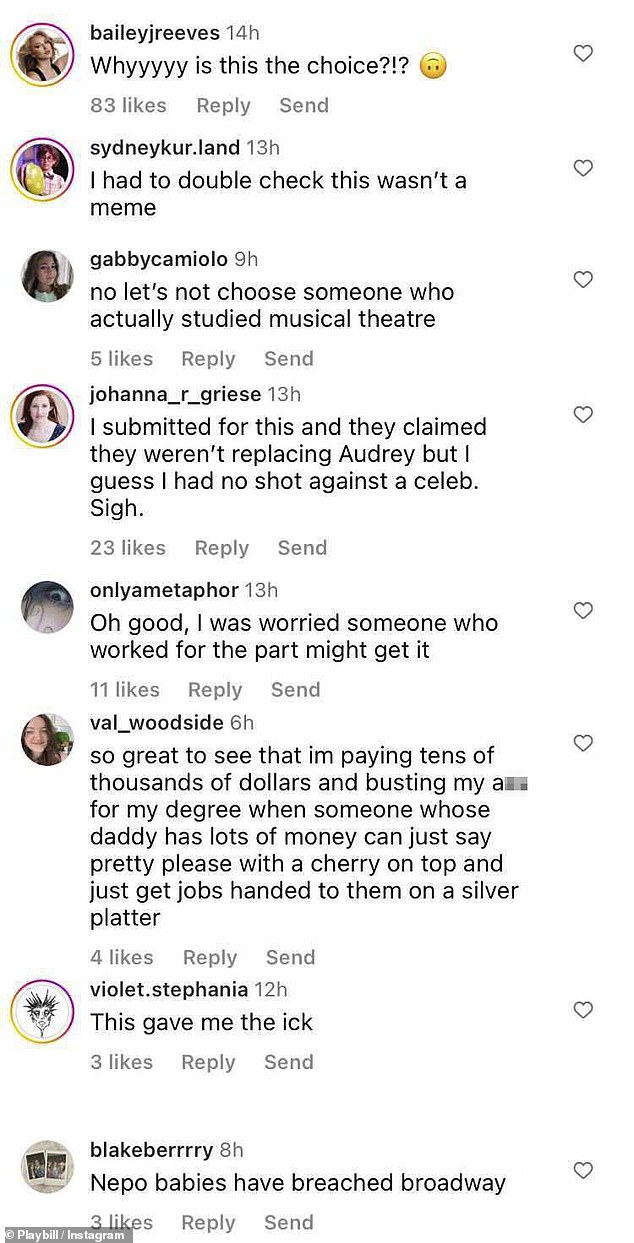 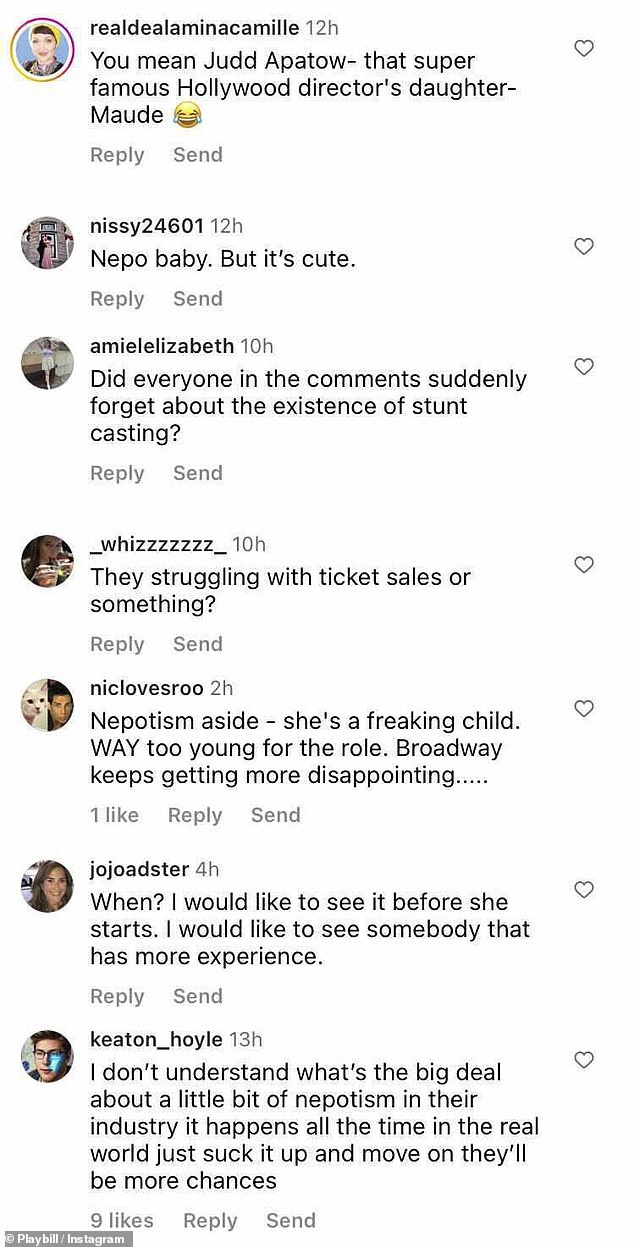 ‘Just suck it up’: While a swarm of Instagram commenters slammed the decision to cast a ‘nepo baby,’ Maude had a smattering of defenders as well

Carol Burnett became a star in a show called Once Upon A Mattress with music by Mary Rodgers, whose father was Richard Rodgers of Rodgers and Hammerstein.

Oscar Hammerstein himself was the son of an impresario who opened a string of opera houses and is now the namesake of New York’s Hammerstein Ballroom.

Since 1965, the youngest-ever winner of the best actress Tony Award has been Liza Minnelli, daughter of Judy Garland and renowned director Vincente Minnelli.

Liza was just 19 when she took home her Tony for Flora, The Red Menace, the first-ever Broadway show scored by Kander and Ebb of Cabaret and Chicago fame. 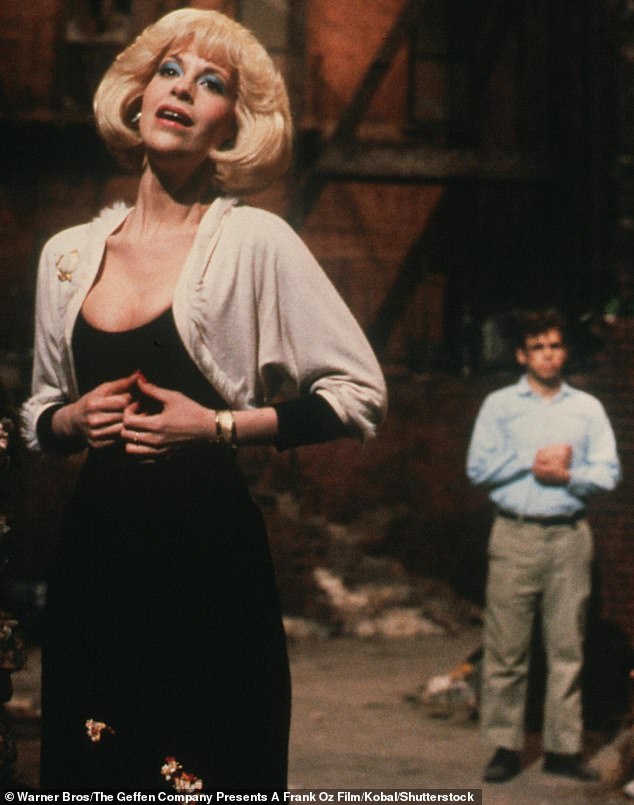 Remember when: Ellen Greene, who originated the role of Audrey off-Broadway in 1982, is pictured in the classic 1986 movie adaptation with Rick Moranis

In more recent years Ben Platt, the Tony-winning lead of the musical Dear Evan Hansen, is the son of movie producer Marc Platt.

Jonah Hill’s little sister Beanie Feldstein opened in a revival of the old Barbra Streisand vehicle Funny Girl last year, only to receive a blistering critical response and be replaced by Glee star Lea Michele, who began her career on Broadway.

Maude is one of a massive glut of rising starlets with famous parents, from Johnny Depp’s daughter Lily-Rose Depp to Andie MacDowell’s daughter Margaret Qualley.

Maya Hawke, whose parents are Uma Thurman and Ethan Hawke, and Kaia Gerber, whose mother is Cindy Crawford, have shot to fame in recent years as well. 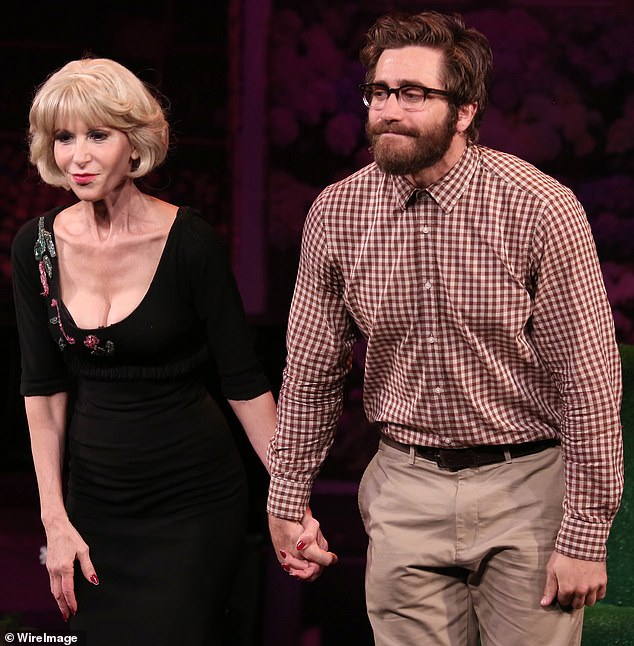 Curtain call: Ellen is pictured at an Encores! production of Little Shop Of Horrors alongside Jake Gyllenhaal as the leading man Seymour

The online chatter around ‘nepo babies’ reached a fever pitch in December after New York magazine ran a viral cover story about the phenomenon.

Dakota Johnson, whose parents are Don Johnson and Melanie Griffith and whose grandmother is Hitchcock blonde Tippi Hedren, was one of the faces on the cover.

Jamie Lee Curtis, the daughter of Psycho actress Janet Leigh and Some Like It Hot heartthrob Tony Curtis, then waded stridently into the debate. 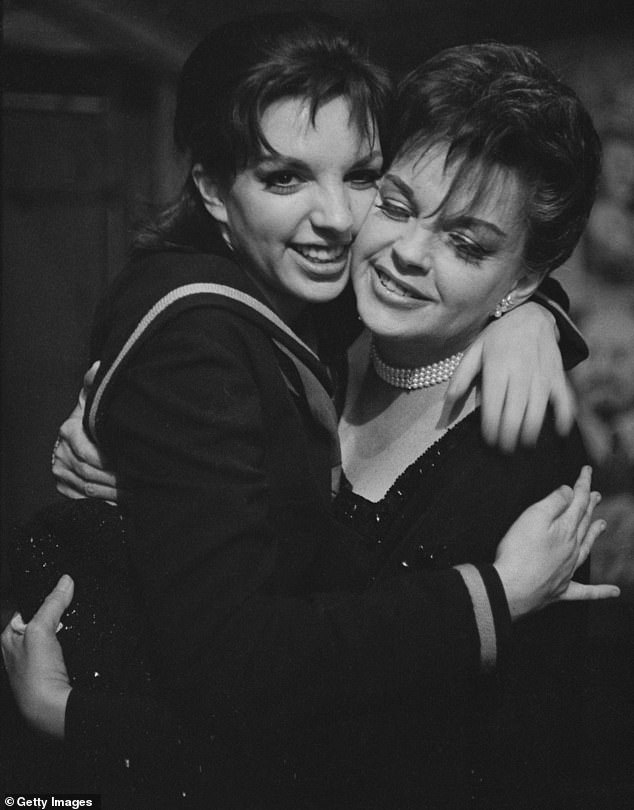 Calling herself the ‘OG Nepo Baby,’ she complained: ‘The current conversation about nepo babies is just designed to try to diminish and denigrate and hurt.’

Little Shop Of Horrors is a 1980s musical with a book and lyrics by Howard Ashman and music by Alan Menken – a duo who went on to be major players in the Disney renaissance by writing the songs for The Little Mermaid and Beauty And The Beast.

The show followers a mild-mannered florist called Seymour who is simultaneously pining after the love of his life Audrey while coping with a gigantic talking Venus flytrap in his care that survives by eating people.

Before Seymour comes to know about the plant’s man-eating tendencies, he names it Audrey II because of his feelings for the leading lady. 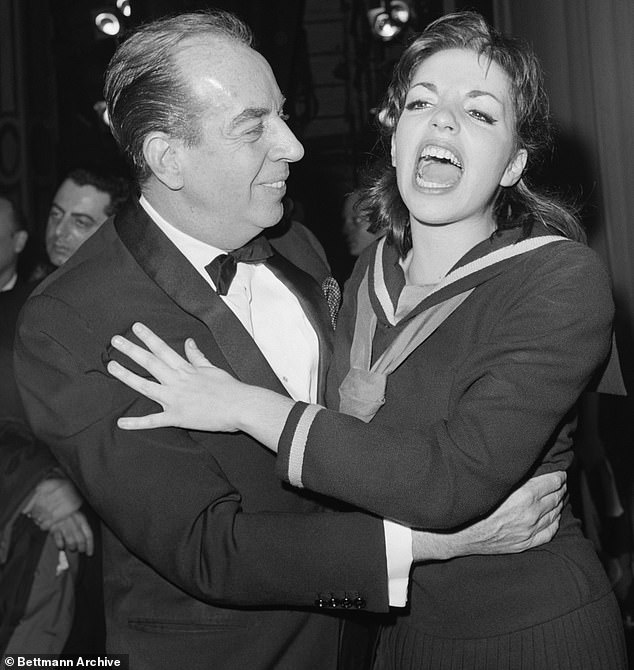 Little Shop Of Horrors first opened off-off-Broadway and then moved to off-Broadway for a five year run that began in 1982.

Based on a movie from 1960, the musical features a beloved score heavily influenced by the music of the 1960s, particularly Motown.

A runaway success, Little Shop Of Horrors became the top-grossing off-Broadway show, but Howard Ashman resisted the idea of a Broadway transfer as he felt the project was at home off-Broadway, according to the New York Times. 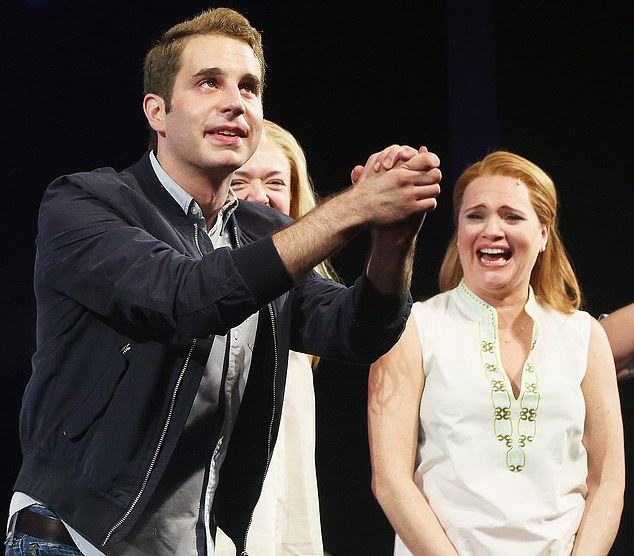 Little Shop Of Horrors achieved new heights of fame when it was adapted into a 1986 movie directed by Frank Oz, who played Yoda in the Star Wars films.

Ghostbusters actor Rick Moranis led the cast as Seymour, while Audrey was played by Ellen Greene, who had originated the role off-Broadway.

The musical finally made it to Broadway in 2003, in a revival that over the course of its run featured such names as Billy Porter and Joey Fatone.

Audrey was played by Alice Ripley, who a few years later won a best actress Tony Award for the Pulitzer-winning musical Next To Normal. 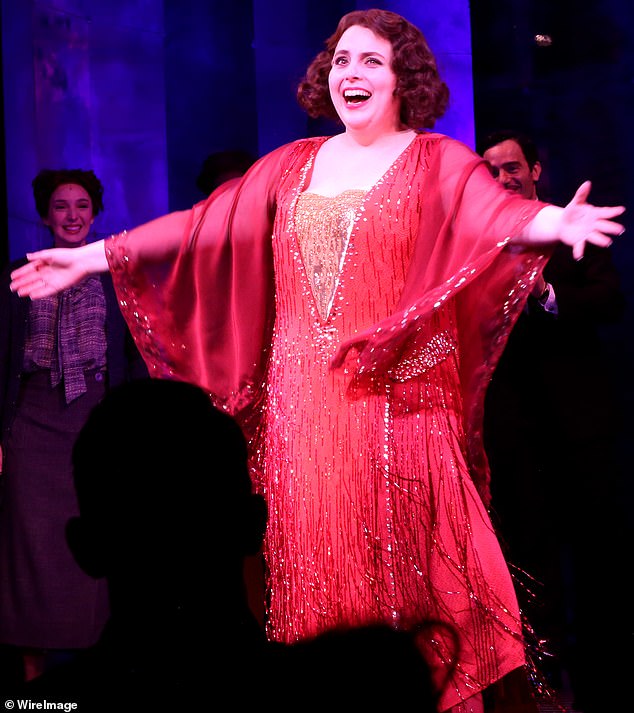