A married businessman who was leading a triple life with three different women was found stabbed to death by one of his secret lovers who then killed herself, an inquest heard.

Gary Williams, 58, had been married to Elaine for many years, while also being in a long-term relationship with another woman since 1991, and having a girlfriend, Jessena Sheridan, 46.

On Christmas Eve last year the Caravan dealer told his wife Elaine he was away on business, intending to spend the night with Ms Sheridan.

The inquest heard there was a mystery ‘altercation’ between the pair and they were both found dead in Miss Sheridan’s home.

Mr Williams had been married to Elaine for almost 40 years but was having an affair with another woman since 1991.

He started a third relationship with Ms Sheridan in 2014 and neither women knew of each other’s existence.

Gary Williams, 58, from Swansea, South Wales, was a devoted husband, father and grandfather who had two other women on the go.

Coroner’s officer Malcolm Thompson told the hearing: ‘Unbeknown to his family, it would appear that Gary had been leading a triple life.

‘Since 1991 Gary had been involved in an affair with a woman and would spend several nights a week with her.

‘He had informed her he was separated from his wife and had a son living abroad. She regarded themselves as partners.

‘He was also having an affair with Jessena Sheridan and attended her home on December 24 last year after leaving his family home.’

The inquest heard Mr Williams had spent the morning of Christmas Eve looking after his two grandchildren at the couple’s home in Swansea, South Wales. 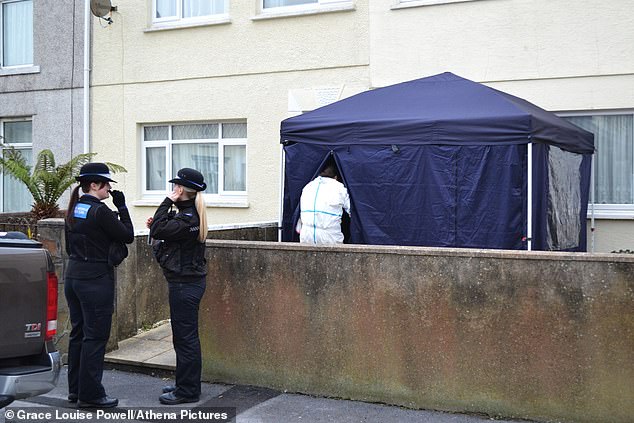 The crime scene at Lakefield Place in Llanelli, Wales, where Gary Williams, 58 and Jessena Wendy Ann Sheridan, 46, were found dead

He told his wife he had to deliver a caravan to Yorkshire and would be back on Christmas morning. His family never saw him alive again.

Miss Sheridan’s family received a text from her on Christmas Day and raised the alarm when they failed to hear from her again.

They went to her home in Llanelli on December 29 where they saw a white cardboard placard in the door.

Mr Thompson said: ‘It told them not to enter, to call the police and also what her intention was.’

Father-of-one Mr Williams was found naked in an upstairs bedroom with multiple stab wounds to the neck and chest along with arm injuries where he’s tried to fend his lover off. 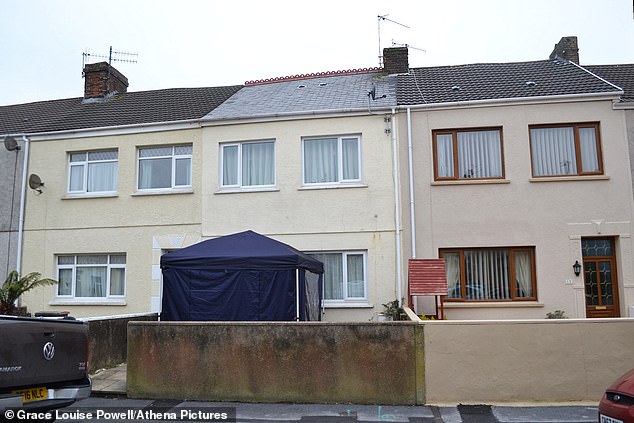 Police officers were called to the property in Llanelli at just after 8.30pm on Sunday, December 29 2019

Mr Thompson said: ‘The walls and floor were heavily bloodstained. Several knives of various sizes were found on the bedroom floor.

Miss Sheridan’s body was found nearby with fatal knife wounds to the wrists and arms.

Carmarthenshire Coroner Paul Bennett said: ‘There are no clear details of what took place other than there must have been some sort of altercation between Gary and Miss Sheridan.

‘The tragedy is not knowing what it was that led to this terrible series of events and what the intention of Mr Williams’s assailant at the time.’

The court later heard that Miss Sheridan had died from self-inflicted knife wounds combined with an overdose.

She had suffered for much of her life from mental health problems, which were exacerbated by the death of her 13-year-old son, Wayne, in a road accident in 2004.

Acting Senior Coroner Paul Bennett recorded a verdict of unlawful killing for Mr Williams and a narrative conclusion that Miss Sheridan had taken her own life.

‘I have found this to be a particularly difficult and tragic case of which to hear evidence,’ he said.

‘It is not disputed Gary Williams had been living a triple and somewhat complicated life. Not only was Mr Williams married but he also had a partner and was also having an affair with Jessena Sheridan whom he had met and formed a relationship with in 2014.

‘This relationship had been secretly kept from both Gary’s wife and his partner. This triple existence was managed for many years by Gary as continued his working and social life.

‘He had been able to separate these relationships entirely without either his wife or long-term partner having any knowledge of his further involvement with Miss Sheridan.

‘The reality is that he left to visit Miss Sheridan at her home that same day. No clear details are available of what actually took place thereafter other than there must have been some sort of altercation between Gary and Miss Sheridan.

‘The real tragedy of this case is not knowing what it was that led to this terrible series of events and what the intention of Mr Williams’s assailant at the time.’

Mr Bennett said Miss Sheridan was a ‘troubled individual who had experienced many traumatic and tragic events in her life’.

A separate inquest on Miss Sheridan was held three hours later to keep the two families of the deceased businessman and his lover apart.