The good life gone wrong: Mother who chased dream life in the country says she now feels ‘so lonely’ living in a rural village ‘full of the elderly with nothing going on’

A mother of two teenagers who moved her family to the country chasing an idyllic rural life seven years ago says she’s ‘so lonely’ after the dream soured.

Mumsnet user countryatheart shared how she’d uprooted her husband and two young children from the town where her own family live seven years ago in pursuit of life in one of England’s ‘most beautiful, scenic villages’ after her husband was offered a job nearby.

In her post, entitled ‘Moved to the country – big mistake?’, she detailed how the family had initially loved the pastoral beauty of their surroundings when the children were small – but told the parenting site’s forum that she now felt ‘trapped’ and wasn’t sure she could go on living there.

Living the dream…until it goes sour: Mumsnet user countryatheart shared her dilemma saying she didn’t think she could ‘go on’ living in an English country village where there’s ‘literally nothing to do’ (stock image) 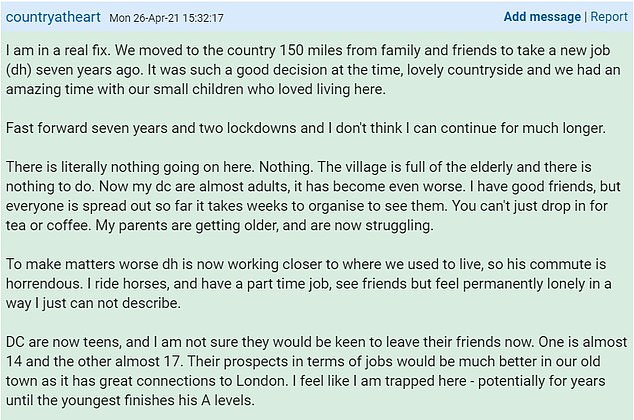 The woman said her family had dreamed of living in a beautiful rural village but, seven years on, she was desperate to be closer to family and live in a more lively area

She wrote: ‘There is literally nothing going on here. Nothing. The village is full of the elderly and there is nothing to do. Now my childre are almost adults, it has become even worse.’

Countryatheart explained how she had moved 150 miles from the town where their family and friends had lived after her husband got a new job. She said that while it had initially felt like a ‘good decision at the time’, she was now despairing at living there.

She wrote: ‘I live in one of the most beautiful, scenic villages in the whole of England, on paper I have everything but I am so lonely. I don’t know if it is the lockdown, but I spend hours looking at houses in my old town,’ adding ‘What have I done?’.

Her dilemma was made worse, she said, because her now teenage children, 14 and 17, are in critical years for their education and wouldn’t be keen to leave the friends they’ve made at school.

While many Mumsnet users responded saying they sympathised, most said it was sensible to leave the village only when her children had finished school. 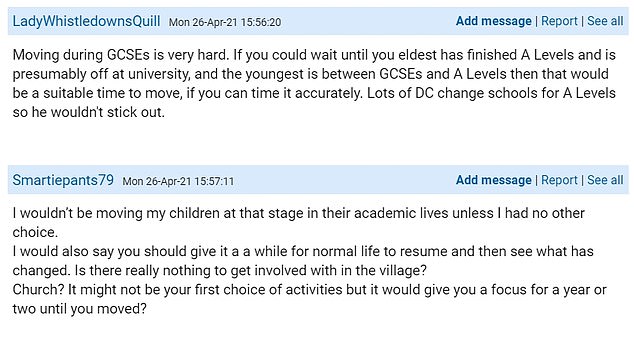 Smartiepants79 wrote: ‘I wouldn’t be moving my children at that stage in their academic lives unless I had no other choice.’

LadyWhistledownsQuill wrote: ‘Moving during GCSEs is very hard. If you could wait until you eldest has finished A Levels and is presumably off at university, and the youngest is between GCSEs and A Levels then that would be a suitable time to move, if you can time it accurately.’

Another contributor, who lives in rural Norfolk, said Countryatheart should move if she’s unhappy, writing: ‘I think you are being a bit hard on yourself. Seven years is a good time in one place.

‘If it makes sense now to move back then I would do it. Just take some time to think carefully and make sure it is not just Covid mehness that is driving your decision.’

LubaLuca also suggested it might be time to cut and run from country life: ‘It sounds like it would make all of you happier to move back. You made a decision that suited you at the time, but now it’s time to do something else.’