A mummified baby grey wolf with a perfectly preserved head, tail, paws and fur has been found in Yukon, northern Canada.

The seven-week-old female wolf pup, christened Zhùr, had been locked in permafrost – ground that remains completely frozen – for 57,000 years.

Researchers think the 1.4-pound pup, who had traces of salmon in her gut, died quickly after her den collapsed, possibly when her mother was out hunting.

Zhùr was found by a gold miner who was blasting water at a wall of frozen mud in 2016, but is only now being described in a paper, published in Current Biology.

She measures 16.5 inches from snout to base of tail and is in an ‘exceptional’ state of preservation, from the papilla on her lips and to her skin and fur.

Zhùr is the most complete specimen of a mummified gray wolf (canis lupus) ever recovered and studied, according to researchers. This photo shows the wolf pup as she was found

Zhùr will go on display at the Yukon Beringia Interpretive Centre in Whitehorse, the capital of northwest Canada’s Yukon territory.

‘She’s the most complete wolf mummy that’s ever been found,’ said study author Julie Meachen, an associate professor of anatomy at Des Moines University, Iowa, US.

‘She’s basically 100 per cent intact – all that’s missing are her eyes.

‘And the fact that she’s so complete allowed us to do so many lines of inquiry on her to basically reconstruct her life.’

It takes a ‘unique combination of circumstances’ to produce a permafrost mummy, which means there’s a degree of chance surrounding Zhùr’s preservation.

However, the research team believe the helpless pup wasn’t in too much pain at the time of her death. 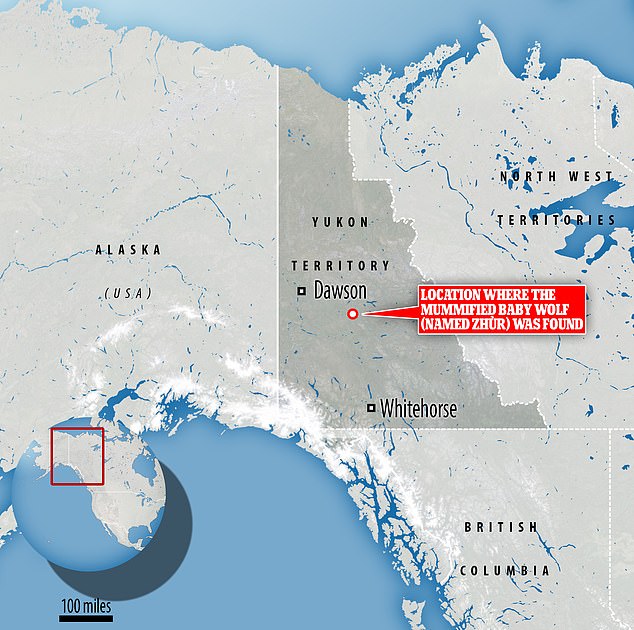 Zhùr will be on display at the Yukon Beringia Interpretive Centre in Whitehorse, the capital of northwest Canada’s Yukon territory 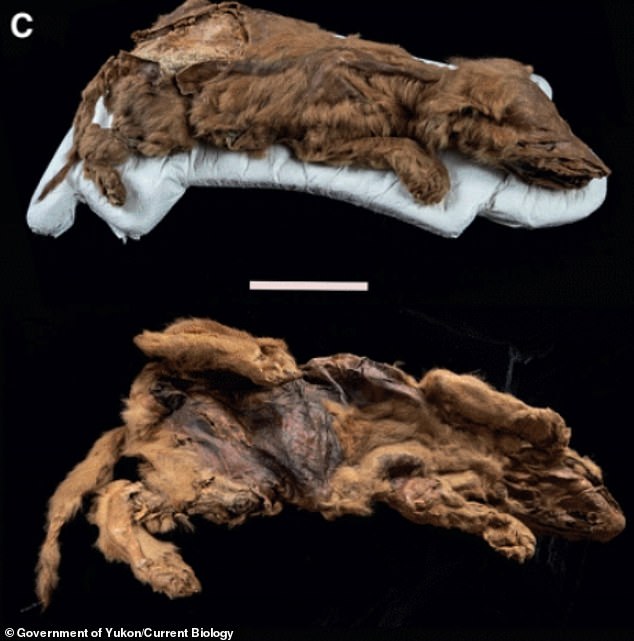 ‘We think she was in her den and died instantaneously by den collapse,’ said Professor Meachen.

‘Our data showed that she didn’t starve and was about seven weeks old when she died, so we feel a bit better knowing the poor little girl didn’t suffer for too long.’

Animals that die slowly or are hunted by predators are less likely to be found in a far less pristine condition than young Zhùr.

‘It’s rare to find these mummies in the Yukon,’ said Professor Meachen.

‘The animal has to die in a permafrost location, where the ground is frozen all the time, and they have to get buried very quickly, like any other fossilisation process.

‘If it lays out on the frozen tundra too long it’ll decompose or get eaten.’ 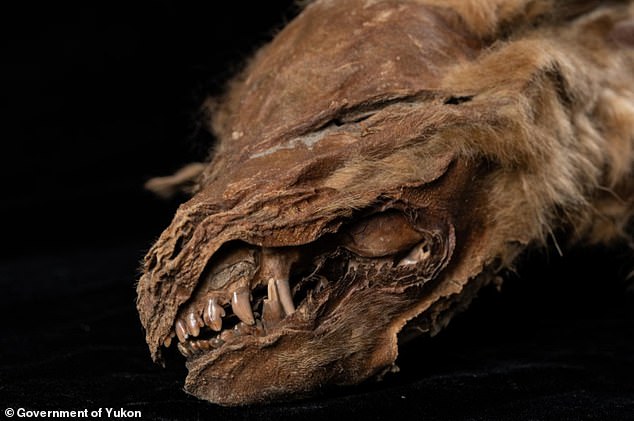 This photo shows a closeup of the wolf pup’s head, showing her teeth and an incredible state of fur preservation

Isotopic analysis of Zhùr reveal her diet was heavily influenced by how close she lived to water.

‘Normally when you think of wolves in the Ice Age, you think of them eating bison or musk oxen or other large animals on land,’ said Professor Meachen.

‘One thing that surprised us was that she was eating aquatic resources, particularly salmon.’

Analysing Zhùr’s genome also confirmed that she is descended from ancient wolves from Russia, Siberia, and Alaska, who are the ancestors of modern wolves as well.

But there remain some outstanding questions about Zhùr’s family.

‘We’ve been asked why she was the only wolf found in the den, and what happened to her mum or siblings,’ said Meachen.

‘It could be that she was an only pup or the other wolves weren’t in the den during the collapse. Unfortunately, we’ll never know.’ 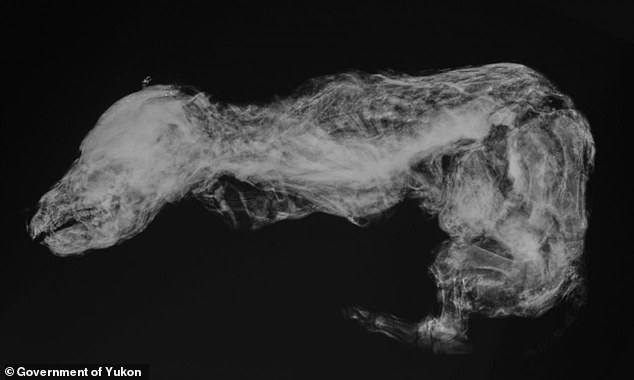 This photo shows an x-ray view of the wolf pup. It takes a unique combination of circumstances to produce a permafrost mummy, researchers say

The specimen holds special significance for the local Tr’ondëk Hwëch’in people, who have agreed to place Zhùr on display at the Yukon Beringia Interpretive Centre.

She is now cleaned and conserved so she will stay intact for years to come, allowing her to travel to other locations in Yukon.

The research team predicts there may be more and more permafrost mummies found in the coming years.

‘One small upside of climate change is that we’re going to find more of these mummies as permafrost melts,’ said Meachen.

‘That’s a good way for science to reconstruct that time better, but it also shows us how much our planet is actually warming.

‘We really need to be careful.’

As the Earth warms, scientists worry that some of the carbon in permafrost could escape to the atmosphere as carbon dioxide or methane.

Increasing the amount of these gases in the atmosphere could make Earth’s climate warm up even more.

If methane increases in the atmosphere, it could cause even more warming than carbon dioxide from the burning of fossil fuels.

Although there is much less methane in the atmosphere than carbon dioxide, it traps heat about twenty times as efficiently as carbon dioxide.

Kevin Schaefer at the US’s National Snow & Ice Data Center said: ‘If governments around the world knew how much methane could be released from permafrost, it could help them decide what to do about it.

‘For example, they would know how much we need to reduce fossil fuel emissions from human activities.’