A fit and healthy mother-of-two has revealed how she suffered from a shock heart attack at 38 before having an ‘almost heart attack’ less than two years later.

Nicola, now 44, from Melbourne told FEMAIL she had been feeling a little light headed, had some ‘heartburn’ and hot flushes in the hours before her attack.

But things intensified when Nicola put her two kids to bed.

Nicola, now 44, from Melbourne told FEMAIL she had been feeling a little light headed, had some ‘heartburn’ and hot flushes in the hours before her attack 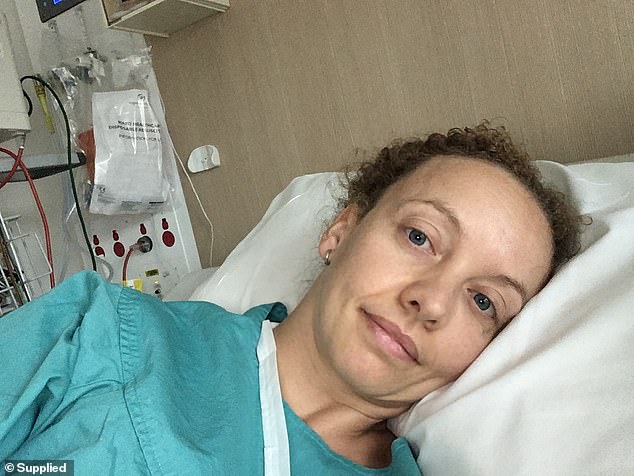 ‘I had just put the little one to sleep and went to get up and felt really lightheaded, dizzy,’ she said.

‘And I had really bad heartburn, burning in the chest that took my breath away.’

She stumbled to the other side of the room where she was hit by a wave of nausea as she called out for her husband.

‘Then my jaw started hurting. And my husband called the ambulance.’

The busy mum said she knew whatever was happening was ‘an emergency’ but had no idea she was suffering from a catastrophic heart attack.

Even paramedics missed the signs when they arrived to her home, 20 minutes after her husband first phoned.

‘He said that I probably had gastro, but because my son had just had an operation he would take me to the hospital as we couldn’t have gastro at home,’ she said. 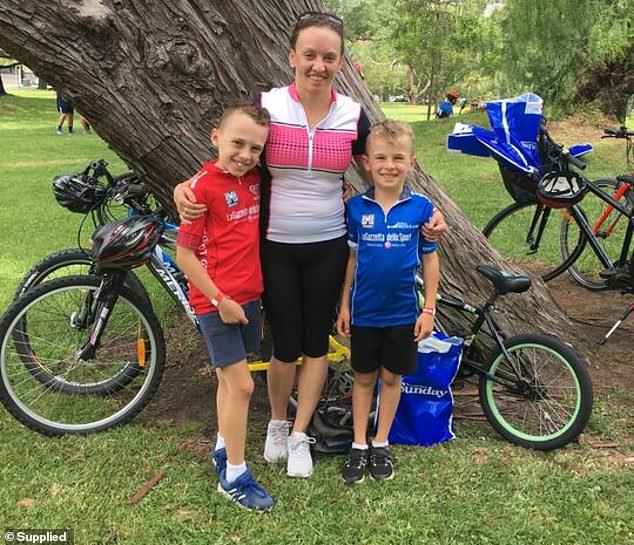 ‘He said that I probably had gastro, but because my son had just had an operation he would take me to the hospital as we couldn’t have gastro at home,’ she said 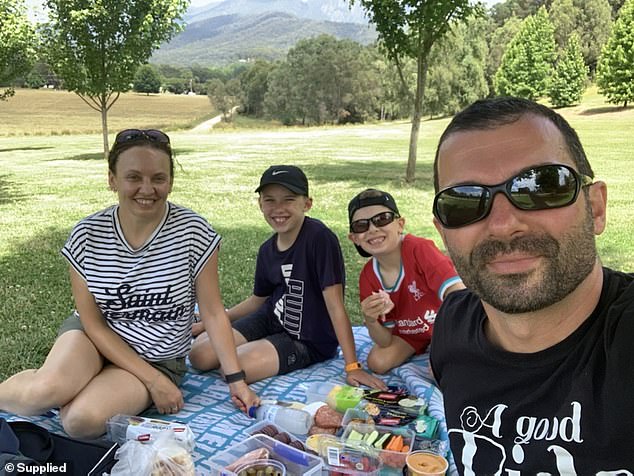 ‘But I knew it wasn’t, I hadn’t thrown up. I just agreed, yes, take me to the hospital.’

The paramedics checked her vitals after she stepped into the ambulance – that’s when Nicola first realised something was wrong with her heart.

‘They did the ECG and I just saw his face,’ she said.

Nicola was taken to an emergency cubicle at the hospital, but as the nurse prepared to take her blood she was interrupted by the paramedic with her ECG results.

‘All of a sudden I was taken to the resuscitation section where we waited for a cardiologist to come.’

She was taken in for emergency surgery and doctors found that 80 per cent of Nicola’s right coronary artery was blocked.

Four stents were inserted to help prevent her from having another attack in the future.

But less than two years later, on the eve of her 40th birthday, she was rushed into emergency again. 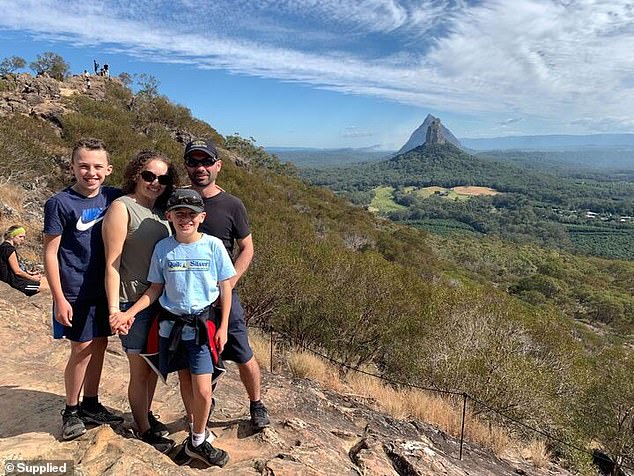 What are common signs of a heart attack?

The most common symptoms of a heart attack include:

Chest pain (angina) — pressure or tightness in the chest and arms that may spread to the jaw, neck or back

Sweating, or a cold sweat

Shortness of breath or difficulty breathing

Women may experience different symptoms, such as:

Tightness or discomfort in the arms

Back pain or pressure

Heart attack symptoms differ from person to person. Some people experience no warning signs before a heart attack while others feel symptoms days or weeks in advance. Nearly 1 in 3 men and nearly 4 in 10 women who have heart attacks don’t feel any chest pain at all. Chest pains may also come and go.

This time she had a 95 per cent blockage in the same artery and another stent was added.

‘The second one was classified as an almost heart attack because I caught it just before,’ she said.

Now Nicola is hyper aware of the symptoms of heart attack, and has had to call an ambulance on a number of occasions.

‘It is terrifying. I remember on one of the occasions when I called the ambulance, watching my kids’ little faces as they took me away,’ she said. 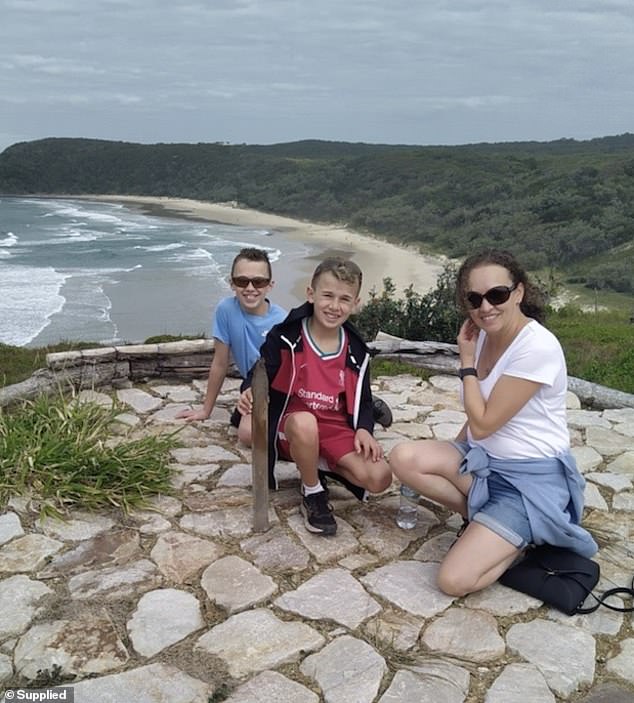 ‘It is terrifying. I remember on one of the occasions when I called the ambulance, watching my kids’ little faces as they took me away,’ she said

‘I would try not to let my family see how scared I was – mum is okay – I will be alright – I got kids to learn how to use the blood pressure machine – and they know if they need to call an ambulance,’ she said.

Nicola says sometimes she will be out at dinner and feel a sharp pain in her chest and have to work out if it is her heart and an emergency or if she is overreacting.

Looking back Nicola realises she had some other symptoms leading up to the heart attack, including fatigue.

She had also been to the doctor twice in the lead up to the heart attack after noticing her knees and ankles were swollen.

‘I went to the GP, because I am proactive and get stuff checked out as soon as I notice something is off,’ she said.

The GP said the swelling was nothing to worry about, it wasn’t her normal doctor so she went for a second opinion two days later and the symptoms was dismissed again.

Nicola is sharing her story in the hopes others will recognise the symptoms before it is too late.

‘I remember in hospital hoping that I would survive. I didn’t want to leave my kids and husband,’ she said.

Nicola was very active before her heart attack, cycling and walking often, and getting active outdoors with her family at every opportunity. 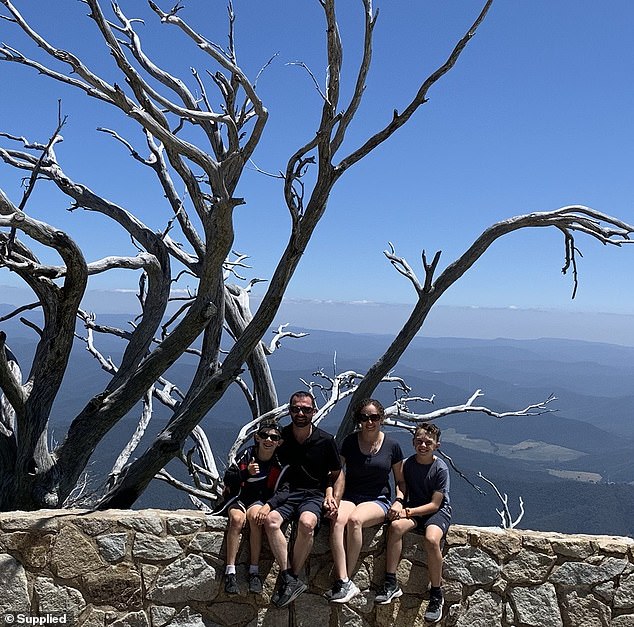 ‘I remember in hospital praying, I am Catholic but not hugely religious, that I would survive. I didn’t want to leave my kids and husband,’ she said

‘I want people to know it can happen to anyone. I didn’t have any of the risk factors. I have never smoked, having a glass of wine was a rare treat, I was healthy and active,’ she said.

‘Having a heart attack was not something I expected, I had no family history or risk factors. I felt numb, overwhelmed and in disbelief.’

Nicola’s heart attacks are still a mystery, which is why she follows news of heart research in the hope that one day she will get answers to what caused it.

She worries about her family history and whether her two boys are now at risk. Nicola is also a Heart Foundation donor and volunteer, including Jump rope for heart, my marathon and is holding a high tea.

Today is Give with Heart Day, The Heart Foundation’s annual 24-hour fundraising event.

With over 40,000 Australian lives lost to heart disease every year, the Heart Foundation is encouraging those who can donate, to donate, to help raise more than $1.5 million so that vital medical research can continue to reduce the impact of heart disease, and keep more families together.

September 14 is Give A Heart Day:

With over 40,000 Australian lives lost to heart disease every year, the Heart Foundation is encouraging the nation to donate to help raise more than $1.5 million for vital medical research.

This research will further reduce the impact of heart disease and keep more families together.

In a new survey released on Give with Heart Day – the Heart Foundation’s 24 hour fundraising campaign – 71% of survey respondents aged 45+ reveal they were concerned about developing heart disease.

Despite this– close to a third (31%) say they have never spoken to their doctor about their heart health.

Nearly half (47%) of the respondents who had been diagnosed with heart disease were not getting regular health checks prior to their diagnosis. Those aged 45+, or 30 and over if you’re of Aboriginal or Torres Strait Islander descent, should get their heart health checked at least every two years.

Over 8 million Australians are eligible for a heart health check.

‘Having regular check-ups allows Australians to better understand their risk of heart disease, but most importantly, they will receive the support needed to lower this risk.’

Along with their GP, Professor Jennings AO urged Australians to talk about heart health and lifestyle improvements with their loved ones.

‘Sometimes just one conversation can save a life,’ he said.

The survey findings are particularly important given that we already know that about one in five Australians are estimated to have a high absolute risk of a future cardiovascular disease event.

This latest survey reveals almost half of those who reported having or being diagnosed with a risk factor for heart disease say high-profile deaths among politicians, sporting icons, and celebrities (44%), or a scare/death of a family member/friend from heart disease (48%), prompted them to visit their GP to check their heart.

17% of all Medicare-subsidised Heart Health Checks – first introduced in 2019 – happened between March and July this year , following the death of Shane Warne from a suspected heart attack.

Many of the risk factors for heart disease are silent and unfortunately, symptoms of a heart attack can be the first sign of heart disease.

This is highlighted in the survey with 51% of the respondents diagnosed with heart disease, never returning to their previous life after diagnosis. . On Give with Heart Day this year, we are looking to raise more than $1.5 million to help continue funding life-saving research so that together we can overcome heart disease.’