A mother has vented fury after her husband hired their neighbour’s inexperienced daughter to babysit their two children, so he could do sports training while she was at a work event.

The mother-of-two children, aged three and five, took to the UK parenting forum Mumsnet, to ask for advice after her husband asked their neighbour’s daughter, who is in her early 20s, to step in even though they ‘hardly know her’.

‘Not only do I feel uncomfortable dumping young children with a stranger for bedtime when they would usually expect stories and cuddles with us,’ she said. ‘But there are also all the activities of bath time when I just feel it needs someone with a bit more experience to do this safely.’

Fellow users were quick to sympathise, with many agreeing that her husband should stay home to look after the children, but others accused the mother of being overprotective and said she needs to ‘loosen up’.

Meanwhile, others suggested the father was being unfairly criticised after he came up with a solution to the childare problem, and said that people would be outraged if the mother was the one being told she had to stay at home and look after the children.

The mother penned a lengthy post explaining why she’s frustrated by the situation, which arose on the evening of a ‘very rare work event’ that’s been in the calendar for months.

She wrote: ‘I am not sure if I am being over cautious or whether other mums would think this okay.

‘My husband decided yesterday that weather was perfect for him to do his sport tonight. We don’t have any local family or regular babysitter and without consulting me he has asked neighbours’ daughter (in early 20s) to babysit our children (3 & 5).

‘I am sure this girl is lovely but we hardly know her, she has never met our kids and to my knowledge has very little experience of young children. She would need to put them to bed because children would be home from afterschool club just before we both need to leave at 6pm.

‘Not only do I feel uncomfortable dumping young children with a stranger for bedtime when they would usually expect stories and cuddles with us. But there are also all the activities of bath time when I just feel it needs someone with a bit more experience to do this safely.

‘I just feel he is being unreasonable and there will be lots of other opportunities to do his sport. He should just stay and look after kids as agreed. He is having a big old sulk and thinks I am being overprotective.’ 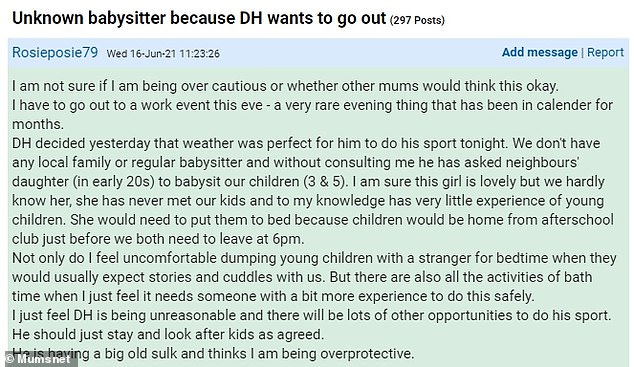 The mother took to Mumsnet, explaining she has had her work event in the calendar for months and her husband decided just yesterday that he wants to do sports on the same night

A stream of responses blasted the mother, with one arguing: ‘You are being massively unreasonable. It’s time to loosen up a bit. We are in danger in this society of doubting everyone and thinking they are dangerous or some sort of threat.

‘Unfortunately those types do exist but it’s rare. Most adults can cope with a couple of kids for a few hours. She’s not a stranger altogether, she’s a neighbour’s daughter. You’re acting like it’s some random of the street!’

Another added:’Honestly, there are SO many threads on here about lazy husbands who don’t seem to do anything around the house or sorting out childcare and leave it all to their wife. 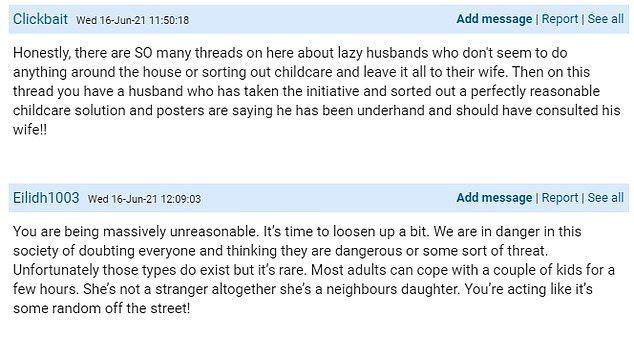 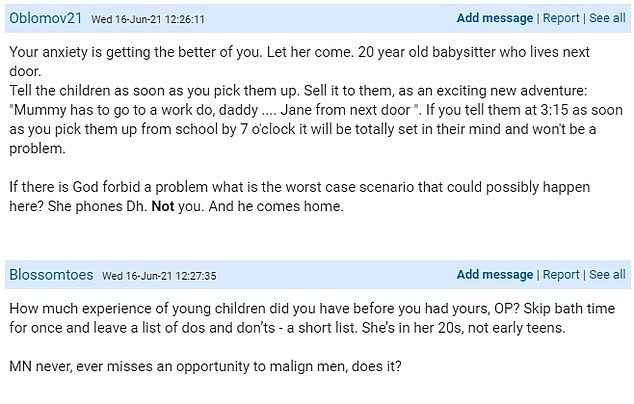 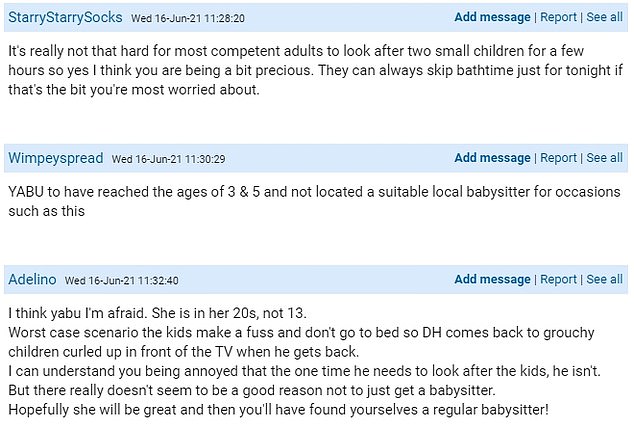 However, others took the mother’s side and admitted they would also be uncomfortable with having someone babysit their children without having discussed it first.

‘YANBU. You hardly know this girl and she has never met your kids before. I think your husband is extremely selfish to put his sport above the emotional wellbeing of his own small children.

‘The kids may well not drown and may well be put to bed but unless they are the most chilled out (or neglected) kids ever, they will find it distressing to do this with someone they have never met.

‘Plus you will be distracted at your work do, worrying. I would say yes, meet this girl, have her round to tea one day with the kids so that you can see if she can babysit in the future. But not tonight. Don’t let your husband’s sulks stop you from protecting your kids,’ one wrote.

Another added: ‘He really couldn’t give it a miss for one evening? I wouldn’t be happy with a stranger my kids have never met before doing bath time and bedtime to be honest, especially from a safeguarding POV. But I would put it on a list to find someone trusted and local to do the odd babysitting when needed for future references.’ 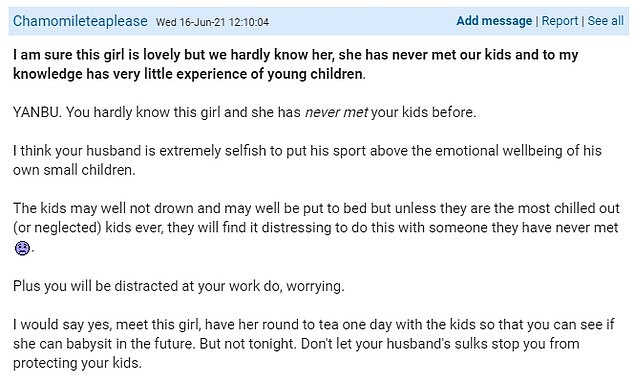 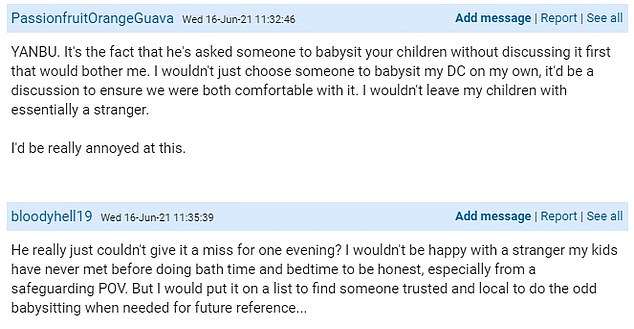