A mother has restored a dirty old teddy bear to perfect condition with ‘strip washing’, a method of soaking soft fabrics in a mixture that draws out deeply ingrained dirt.

The Australian woman posted in a Facebook cleaning group detailing how she salvaged her dog’s dirt-encrusted toy which had been left outside in the garden for almost a year.

Just a few hours of treatment stripped the sodden teddy of its grimy coat, leaving it looking as good as new. 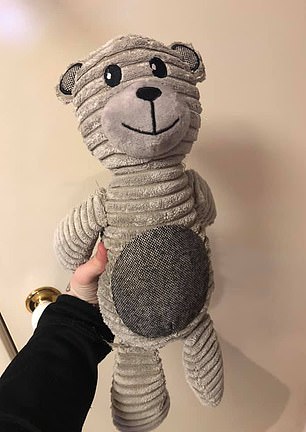 The dog’s dirt-encrusted teddy bear (pictured left) after a year of languishing in the garden, and (right) after a few hours of soaking in lectric soda, washing powder and dishwashing liquid 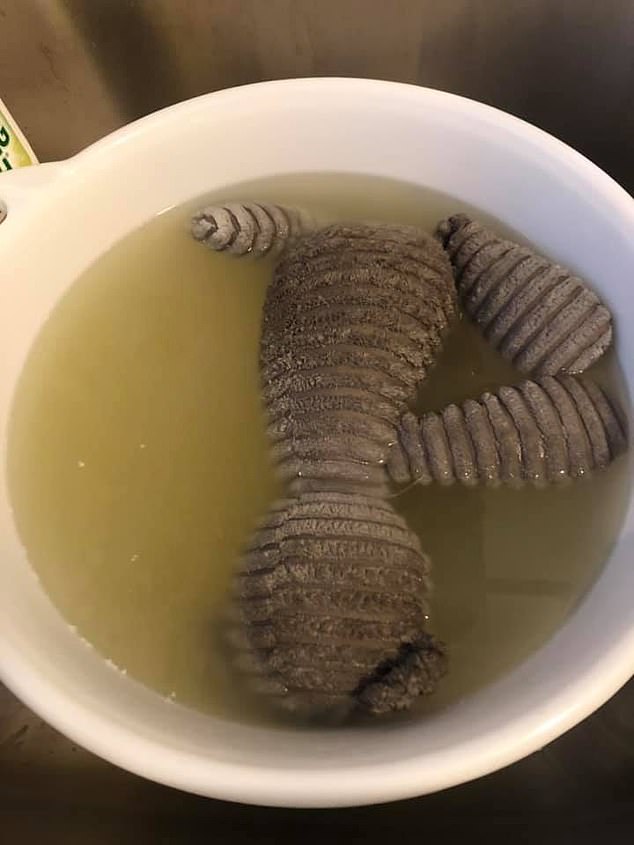 Just a few hours of treatment stripped the sodden teddy of its grimy coat, leaving it looking as good as new

‘Look how clean he is! He’s in the dryer at the moment being fluffed up again,’ the mother wrote in the caption of photos showcasing the impressive transformation.

‘He looks like new, great job,’ one woman replied.

Another said she was surprised to see a dog hold on to a toy for so long: ‘I think the longest stuffed cuddle toy my sausage dogs have owned is like two hours max!’

And it’s not the first time strip washing has gone viral on Australian social media.

How to strip wash bed linen

1. Stir the washing soda, Borax and detergent into hot water until the products have fully dissolved.

2. Add bed linen, stir the water around and leave to soak until the water goes cold.

3. Stir the linen every hour to ensure detergent soaks into every inch of the fabric. 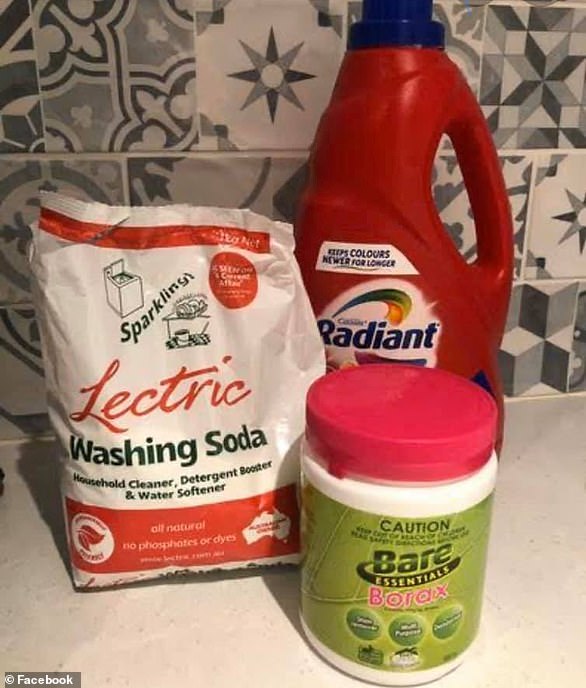 All products are available from leading supermarkets like Coles or Woolworths

During lockdown in April, a Melbourne mother soaked a super king duvet too big to fit in the washing machine in a bath of warm water, washing soda and liquid detergent for five hours to thoroughly clean any grime festering on the fabric.

She was horrified when filth quickly seeped into the water, colouring the bath a deep, murky grey, but didn’t say how long it had been between cleans.

She said the doona ‘didn’t look that bad’ until she saw the result of a few hours of soaking.

She anonymously shared photos of the dirt-stained water and sparkling white doona after it was cleaned in a Facebook group on Sunday to highlight the importance of regularly washing quilts and pillows which are often overlooked. 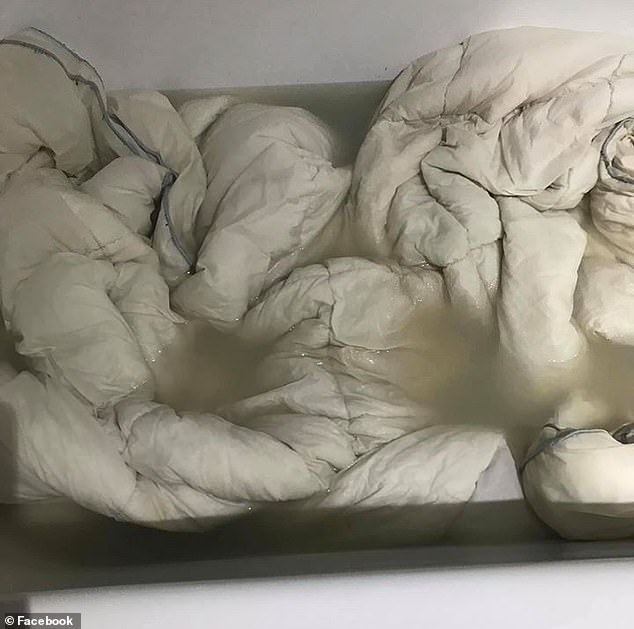 Before: Filth quickly seeped from the seemingly clean doona into the water, colouring the bath a deep, murky grey shortly after the mother started her ‘strip wash’ 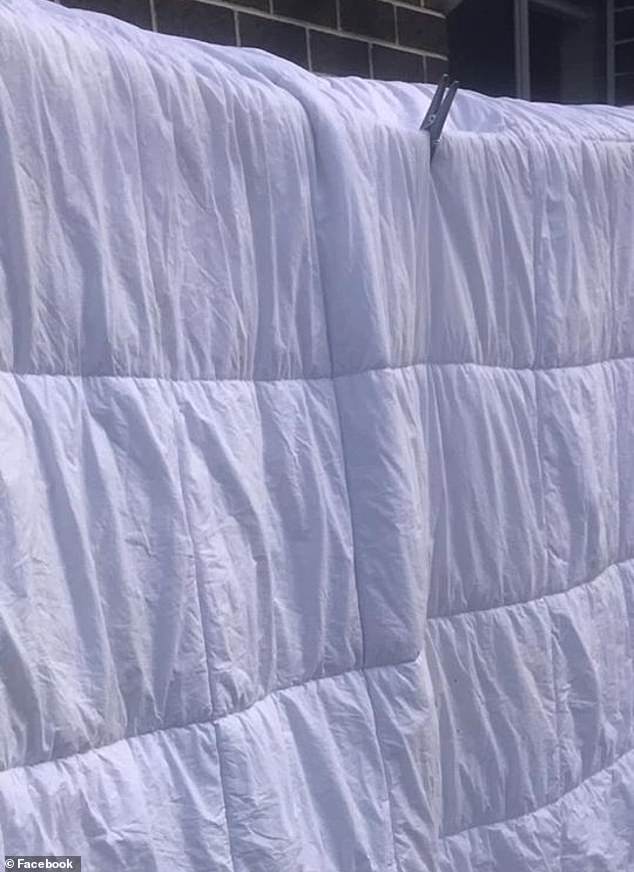 After: The quilt came up sparkling white after five hours of soaking in washing soda, liquid detergent and Borax, a cleaning powder commonly used to disinfect and neutralise odours in the home

All are available from leading supermarkets like Coles and Woolworths.

To start, fill a bath tub or large basin with 10 litres of hot tap water. 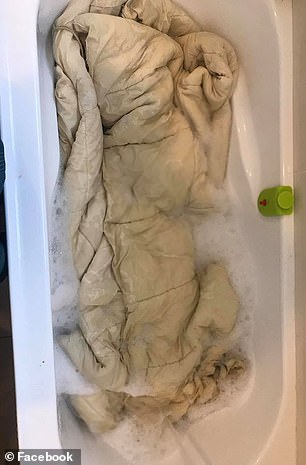 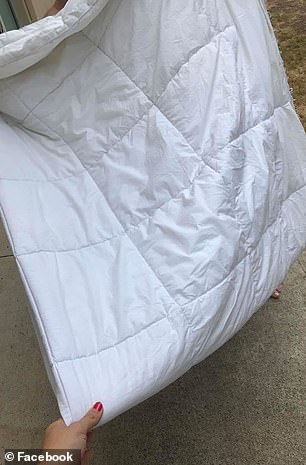 Women who have tried soaking or ‘strip washing’ confirmed the technique lifts even the toughest dirt without damaging the quality of the fabric, leaving doonas like this one looking brand new in a matter of hours

Immerse the doona or whatever needs to be washed in the water, stirring every hour for roughly five hours or until the water goes cold.

It’s important to mix the water around to ensure the powder and detergent soaks into every inch of the fabric.

Once the water has cooled, wash the doona as you normally would in the washing machine.

If the item is too big to fit in the washing machine, rinse it by hand, thoroughly wring out excess water and leave to air dry.