EXPRESS INFORMER > News & Politics > Mum, 34, who broke her spine on holiday in Turkey was faced with £2,000 medical bill

A mum who broke her spine on holiday has claimed she was told she would go to jail if she could not pay for £2,000 worth of medical treatment.

Joanne Bishop, 34, from Measham, flew out to Antalya in Turkey on October 15 with her 12-year-old son and a friend, for what they hoped would be a much needed break.

But their holiday turned into a nightmare after Joanne booked an off-road safari trip for around 19 euros with a private company on October 21 – the day before they were due to fly home.

Joanne then broke her back as one of the safari vehicles hit a bump as it went through a dried up river bed, according to Leicestershire Live.

And to make matters worse, her medical insurance was declared null and void because Turkey had been placed on the restricted travel list at the time.

Joanne Bishop, 34, from Measham, Leicestershire, flew to Antalya in Turkey on October 15 with her son (pictured), 12, and a friend 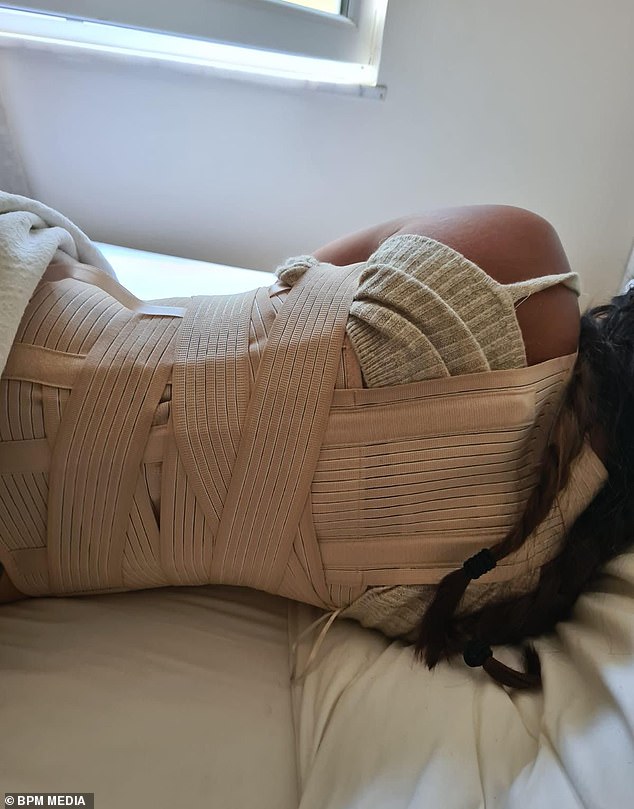 The hairdresser broke her back (pictured) when the Jeep she was she was travelling in on an off-road safari hit a bump as it headed through a dried up river bed, Leciestershire Live has reported

She was left facing paying a £2,000 bill for her treatment and claims when she asked a doctor what would happen if she couldn’t pay, she was told: ‘You will go to jail’.

Joanne told the publication she fractured one of her vertebrae when she was thrown into the air when the vehicle she was in hit a bump.

‘I just sort of bounced straight up into the air and came back down, landed on my bum and felt something break,’ she explained. ‘I knew something had broken, I felt it and I heard it. I managed to get myself onto the floor and was screaming “stop”.’

‘Everyone was looking at me and I looked at the German guy opposite me saying ‘I’m really hurt, make them stop’.’

The jeep came to a halt and the driver called an ambulance. Joanne said the pain was so great that she was shaking and she couldn’t breathe properly.

The ambulance took her to a private hospital for treatment where she was eventually diagnosed with a spinal injury.

Joanne flew back to UK on October 22, wearing a back brace and sitting upright having taken a large dosage of diazepam (pictured) 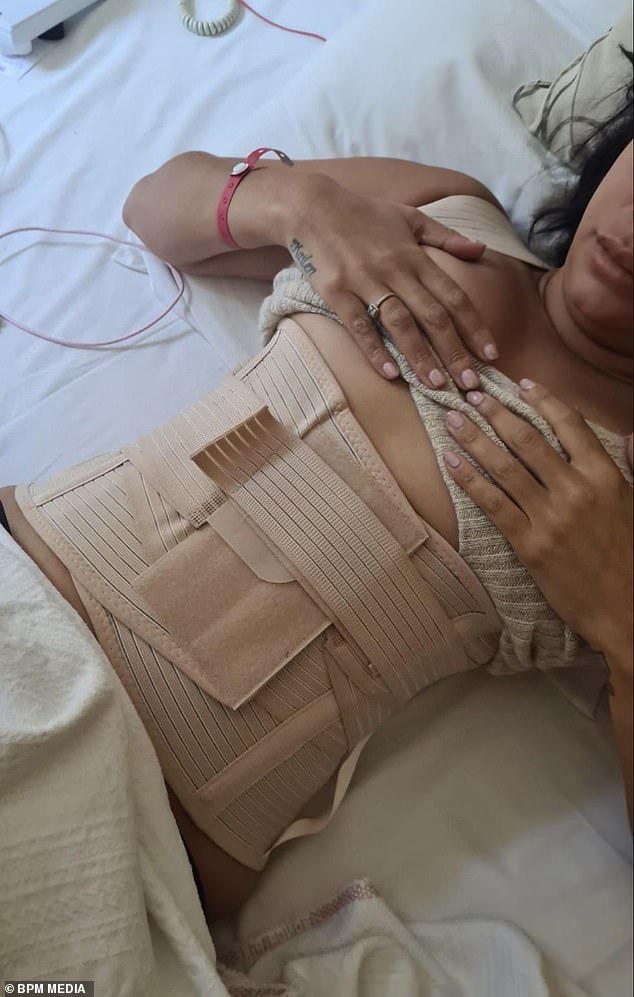 Joanne (pictured, in hospital) fractured one of her vertebrae when she was thrown into the air when the vehicle she was in hit a bump

‘My sister was trying to sort out my medical insurance but because of Covid-19 and I was in Turkey which apparently had been put on the restricted list my insurance had been null and void,’ Joanne said. ‘There wasn’t anything I could do.’

She added when she asked the hospital what would happen if she couldn’t pay, a doctor allegedly replied: ‘You will go to jail.’

‘So there’s me and my broken back with my 12-year-old child thinking ‘What the hell am I going to do?’ Joanne said. ‘I couldn’t afford a couple of thousand.’

The safari company eventually agreed to pay the £2,000 after she signed a waiver to say that the accident was not her fault.

But Joanne couldn’t afford the £500-a-night it cost to stay at the private hospital while she recovered and so the medical staff said they could transport her by ambulance to a public hospital which was much more affordable.

She says she was advised ‘not to do anything’ for a few days, but was then told that the hospital could not provide an ambulance and she would have to take a taxi to the other hospital instead.

The hairdresser says she was in immense pain when she got in the taxi and travelled to the next hospital.

But her problems didn’t end there. When Joanne arrived at the second hospital, she was told they would not treat her, because it was now a Covid-19 hospital and there were no beds available.

Left with no other choice, she then went back to her hotel. The British Embassy then told her she needed to fly home, but repatriation would also cost thousands, which she also could not afford. 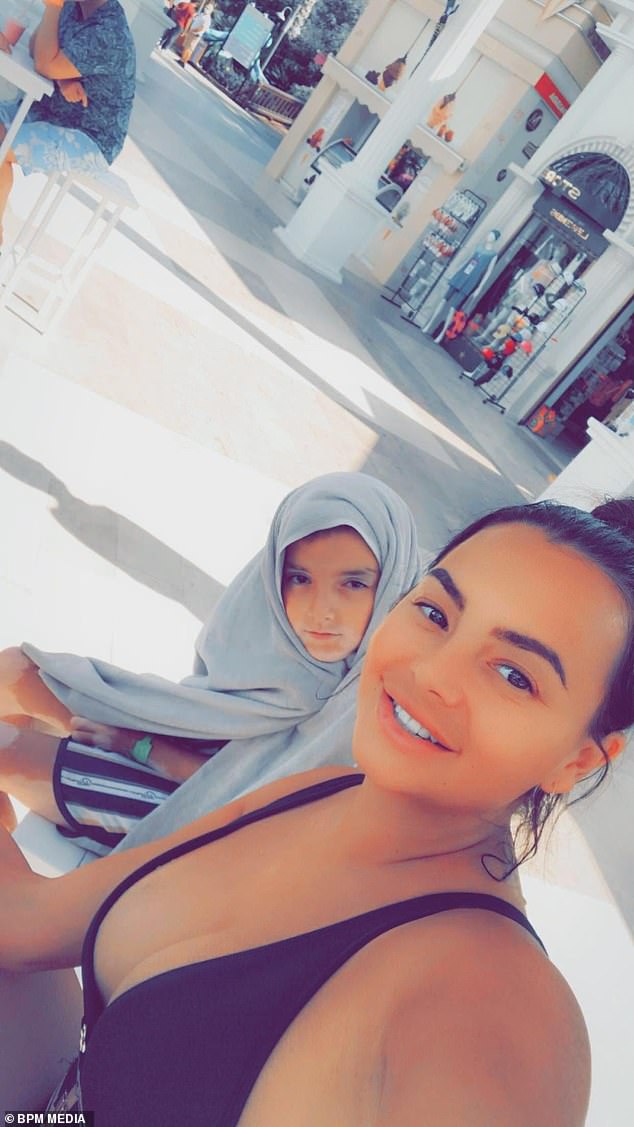 When Joanne (pictured, with her son) arrived at the second hospital, she was told they would not treat her, because it was now a Covid-19 hospital and there were no beds available

Joanne flew back to UK on October 22, wearing a back brace and sitting upright having taken a large dosage of diazepam. She was taken straight to Bristol Royal Infirmary which confirmed that she had fractured her T-10 vertebrae.

The injury could take anywhere from 3 months to 12 months to heal completely, meaning that Joanne will be unable to work for months.

‘I’m staying with my sister because I can’t do much without any help,’ she said. ‘My sister’s just had a baby and she’s been using the baby bath to help me wash, I tried to get into the bath by myself, but I couldn’t.’

Throughout the terrifying ordeal, Joanne’s son has not left her side.

A spokesperson from tifgroup, which handles claims for Boots travel insurance, said: ‘We are very sorry to hear about Joanne Bishop’s accident in Turkey, and we hope that she is on the mend.

‘Unfortunately our policies, like most other policies in the industry, will not cover you if you travel against Foreign, Commonwealth, and Development Office (FCDO) advice, which recommended against people travelling to Turkey two weeks before she went there.

‘This is an industry-standard and we always advise our customers to check the FCDO government website before travelling. It’s also very important that people understand their travel insurance policies which in this instance make it quite clear that she would not be covered in these circumstances.’

A GoFundMe page has been set up to help the single mum while she is unable to work, which can be found here.

‘I just need to live and to keep a roof over us. I’m not going to be able to work and at some point I’m going to have to go and do my own shopping,’ she said.

Since returning from Turkey, she and her son have been in self-isolation.