Faced with rocketing living costs, some people are seeking to insulate themselves from the bleak economic future with one simple measure: moving their families closer to home.

Some 66 per cent of people aged 50 to 65 own their homes outright. If two or more members of a family were to sell their mortgage-free properties and pool their resources they could afford enough to buy one big house, large enough to meet the needs of several generations.

Far from being pie in the sky theorising, this type of multi-generational living is happening already.

Happy families: Some people are seeking to insulate themselves from the bleak economic future with one simple measure: moving their families closer to home

Northstone, a homebuilder based in the North-West of England with 1,300 new homes in the pipeline, is to build a multi-generational home at its Horwich site and thereafter build two or three on each of its new developments.

These will be four-bedroom homes with an adjoining single-storey annexe clad in black timber.

The idea is that families will eat meals together in the main house, but have their own separate space in the annexe — ideal for a younger generation or their babyboomer grandparents.

‘People will save on running costs, energy and transport and they won’t have the worry of rising mortgage rates hanging over them,’ says Richard O’Brien, design director at Northstone.

‘But it’s not just about finance. It means the old will have the comfort of knowing their family is close by and the young can save some money.’

Multi-generational homes can often be converted from older homes, too. John Appleby, 43, from Pembrokeshire, decided on this path as a direct response to the mini-Budget.

‘I had originally intended to extend my mortgage to buy a £900,000 home, but rising interest rates put me off,’ says John who has a wife and two young children.

Instead, my mother sold her bungalow and we now intend buying outright a house for about £800,000, big enough for all of us.’

West Wales offers a lot of scope for multi-generational living. ‘We have ideal properties such as large farmhouses with converted barns in the yard for boomerang children,’ says Carol Peett, of West Wales Property Finders.

‘We even have tall townhouses in places like Carmarthen or Tenby if you’re not looking for a rural lifestyle.’ 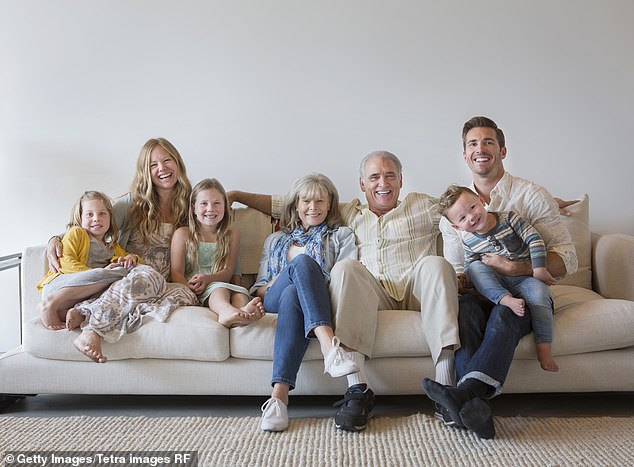 Cosy: Grandparents can help out too and have the comfort of knowing their family is close by

The success of multi-generational living depends on families getting on. Luckily, things worked out well for school office worker Julie Smith, 49, when she decided to upsize, with daughter Sophie, 16, to a £630,000 home on the Berkeley Homes development in Woodhurst Park, Warfield, Berkshire, bought jointly with mother Betty, 80.

‘We couldn’t be happier,’ says Julie. ‘That’s largely because the house is big enough for us to be apart when we want to be.’ Members of the family effectively have a floor each in this four-bedroom, three-storey house.

Although multi-generational living isn’t for everyone, parents can also help their children’s finances by moving to a house near to them and helping look after the grandchildren. Childcare is so expensive nowadays.

According to a survey by charity Pregnant Then Screwed, a third of parents believe the cost of summer childcare is equal to or more than what they earn.

Brian Stubbs, 73, and his wife Christine used to travel from their home in St Albans to look after their grandchildren near Bedford.

However, the trek up the M1 meant they couldn’t help out as often as they’d have liked. Their answer was to buy a David Wilson home at Clipstone Park, Leighton Buzzard.

‘We released £100,000 on the house move because Leighton Buzzard is a cheaper area and save money on petrol by avoiding the M1,’ says Brian.

‘But the main benefit has been in saved nursery fees and in the satisfaction from seeing the kids so often.’

Together they bought a five-bedroom property in the Burrington Estates Harbour Reach development in Fowey, Cornwall, for £610,000.

‘We are thoroughly enjoying our new life on the Cornish coast,’ says Ian, whose son and daughter in their 20s visit when they can.

On the market… under one roof