Marks & Spencer saw its profits fall by 24 per cent in the first half, fresh figures published today show.

The retailer reiterated that it expects its full-year profit to fall short of last year’s toal amid higher costs and pressure on household budgets.

M&S said it expects a ‘material contraction’ in shopper demand next year, as consumers battle against surging inflation.

Profit drop: Marks & Spencer saw its profits fall by 24% in the first half

The group also warned more retailers will collapse over the next 12 months, as many grapple with rampaging costs and dwindling customer demand.

It said: The combined impacts of the cost-of-living squeeze and the most marked rise in the cost of doing business for many years are creating pressures on margins industry-wide.

‘This will result in unviable capacity leaving the industry, creating opportunities for the leaner players who remain.’

It said the sector was facing a ‘gathering storm’, which look set to bring down more businesses in the coming year.  Shoppers’ disposable income is falling amid the highest inflation for 40 years. 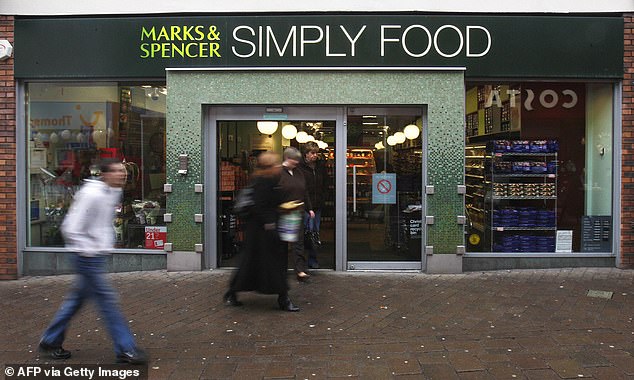 Concers: M&S said it expects a ‘material contraction’ in shopper demand next year

The retailer said it generated an adjusted pre-tax profit of £205.5million in the six months to 1 October, down from £269.4million at the same point a year ago.

Profits were also hit by the exit from Russia and a loss at online joint venture Ocado Retail. There was also no government Covid-related business rate relief.

But the group’s revenue increased by 8.5 per cent to £5.54billion over the period, amid an upturn in prices.

Stuart Machin, the retailer’s chief executive, said: ‘Across all M&S markets it is highly likely that conditions will become more challenging in the financial year 2024.

‘As we enter what is traditionally our strongest quarter the business continues to trade well.’

In the last four weeks, trading has been in line with forecasts, with clothing and home sales up 4.2 per cent, food sales up 3 per cent and international sales up 4.1 per cent.

While food sales increased by 5.6 per cent in the first half, adjusted operating profit in the division fell by 42 per cent to £71.8million

However, the group said its more affluent shopper base, reduced debt pile and strong grip of the market in divisions like school clothes, gave the company ‘scope for greater resilience’.

John Moore, a senior investment manager at RBC Brewin Dolphin, said: ‘M&S has a seen a decline in profits, but the effects of the economic downturn are yet to really show themselves in the company’s numbers.

‘Still, M&S has come out fighting with its update, highlighting the range of self-help measures it is taking.

‘Being on the front foot regarding cost savings is helpful going into what will undoubtedly be a very tough next 18 months, while the acquisition of Gist is also forward-thinking and provides an element of control over supply chain costs – a major challenge for many retailers this year. Inevitably, there is a note of caution about the remainder of 2022 and in to 2023, but M&S has shown it is willing to change and is taking much-needed steps in the right direction.’

Richard Hunter, head of markets at Interactive Investor, said: ‘For all of the progress, and even with the traditionally strongest final quarter in play, the outlook for the next year is cloudy for reasons which are largely outside the company’s control.

‘The festive period and a rarely timed World Cup competition should provide a shorter term boost, while M&S is at pains to point out that a fair proportion of its customers are ones with a higher income and age demographic.

‘Even so, the deteriorating economic outlook has ravaged the share prices of retailers in general, and M&S is no exception, with the shares having fallen over 38 per cent over the last year, as compared to a decline of 20 per cent for the wider FTSE 250.

‘Despite an increasingly attractive valuation in historical terms, the tide has not yet turned in the company’s favour, with the market consensus stuck for the moment at a hold.’