He is no stranger to war, but Captain Sir Tom Moore has found himself at the centre of a battle between two of Britain’s retailers.

John Lewis and Marks & Spencer are understood to be competing to make the lockdown hero the face of their eagerly awaited Christmas advertising campaign.

Both retailers believe that the veteran, who inspired the nation by raising £32 million for charity after completing 100 laps of his garden before his 100th birthday on April 30, would be ‘perfect’ to front a campaign likely to reflect the challenges of the coronavirus crisis.

One insider said: ‘What would be better than having Captain Tom leading the Christmas celebrations? He is the epitome of Great Britain and loved by all.

‘Unfortunately, this is an idea that more than one of the retailers have come up with so there is going to be quite the fight on for him.’

The competition to screen the most acclaimed Christmas TV advert has seen production budgets swell in recent years. But owing to the financial impact of the pandemic, industry experts believe costs will be scaled back this year.

Captain Tom, who served in India, the Burma campaign and Sumatra during the Second World War, began his fundraising walk on April 6 at his Bedfordshire home. 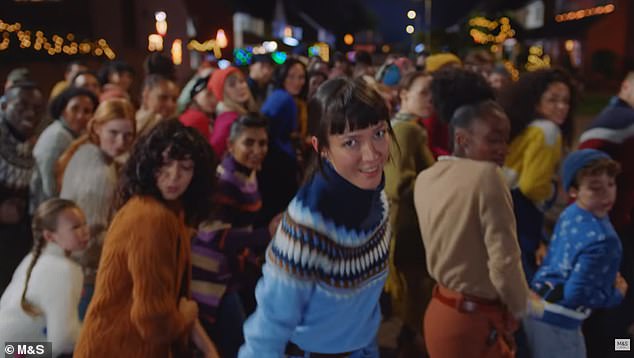 One insider said: ‘What would be better than having Captain Tom leading the Christmas celebrations? He is the epitome of Great Britain and loved by all.’ Pictured: M&S 2019 Christmas advert

One insider said ‘there is going to be quite the fight on for him.’ Pictured: John Lewis 2019 Christmas advert

He initially hoped to collect £1,000 for NHS Charities Together but ended up raising £32.8 million from 1.5 million donors.

He also featured in a cover version of You’ll Never Walk Alone that topped the UK music charts, making him the oldest person to have a UK No 1.

Captain Tom, who worked as managing director of a concrete company after the war, received more than 150,000 cards and was given a flypast by the RAF for his 100th birthday.

His knighthood was announced on May 19.