Marks & Spencer has struck an agreement to have electric vehicle charging stations built at dozens of its stores by the infrastructure supplier arm of oil supermajor BP.

Under the terms of the deal, up to 900 EV charge points will initially be installed at around 70 of the retailer’s national outlets in the coming two years, adding another 40,000-kilowatt hours of charging capacity.

Fifteen charging devices have already been laid down in Maidstone, Kent and Southgate, North London, as part of a pilot scheme, which both firms said had been successful.

Tie-up: Under the terms of the new deal with BP, up to 900 EV charge points will initially be installed at around 70 of Marks & Spencer’s national outlets in the coming two years

All new ‘pulse charge points’ will possess a minimum capacity of 50KW, with some having an ‘ultra-fast’ speed of 150KW.

BP intends to spend up to £1billion installing over 100,000 chargers across the globe by the end of the decade. According to its website, the group has built more than 9,000 in the UK so far.

Over the same period, the firm expects to invest close to £18billion in the UK energy sector, including on offshore wind farms, solar panels and low-carbon hydrogen.

Akira Kirton, BP Pulse UK’s chief executive, said: ‘We aim to provide fast, reliable, and convenient EV charging to our customers that fits in with ‎their busy lifestyles, and so, we are excited to extend our relationship with M&S to put high-speed charge points at their stores, growing our network even further.

‘This is exactly the kind of collaboration the UK needs to help accelerate the transition to lower carbon transport, and we’re delighted to be working with M&S to make that happen.’

BP’s relationship with the retailer goes back to 2005 when the first M&S Simply Food establishments were opened at petrol stations operated by the oil and gas giant. 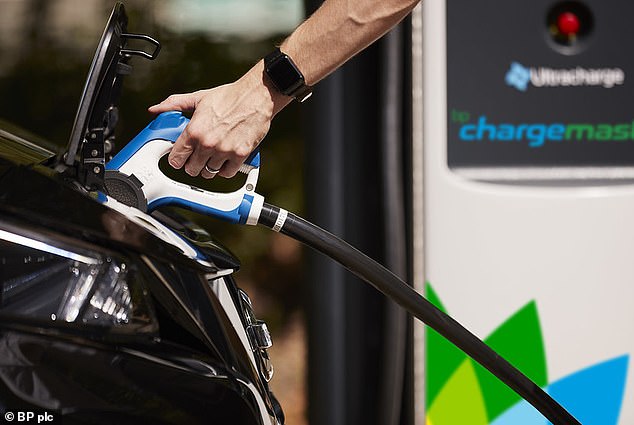 Over 300 such outlets are now situated at BP forecourts across the UK, with more than 60 also containing Pulse charging points.

Sacha Berendji, M&S’s director of operations, remarked: ‘EV charging is the latest feature to ensure we have a store estate fit for the future, to help our customers live lower carbon lives.

‘We know that services like EV charging are in demand from our customers, so we’re delighted to be offering this service and give more reasons for customers to shop with us.’

BP’s latest announcement comes as it faces heightened criticism surrounding its failure to divest a 19.75 per cent stake in Rosneft following Russia’s full-scale invasion of Ukraine earlier this year.

In a statement responding to his remarks, BP said: ‘Just three days after Russia’s attack on Ukraine, BP announced that we will exit our shareholding in Rosneft and other businesses in Russia – we said the attack was ‘a fundamental change. This is still our position.’

It added that it had not received any dividends from Rosneft shares since the attack in February and no longer declared any equity share of earnings, production or reserves from Rosneft.