Politicians are queuing up to support Money Mail’s Pick Up or Pay Up campaign after we urged readers to write to their MPs.

We are calling for consumer protection laws to be updated so that big businesses will be fined if they do not answer their phones within ten minutes.

Since we launched our campaign last month, we have been inundated with thousands of letters from readers backing our initiative and sharing their stories.

We urged you to contact your MPs so we could rally support to have it discussed in Parliament.

Conservative MP Robert Halfon has been leading the charge and applied for a backbench debate last week. He needs 25 MPs to sign his motion — and has 16 so far.

Today, we are renewing our call for readers to write to their MPs.

To gather further support, we did an audit of the letters we received. We then contacted the MPs whose constituencies came up most frequently and asked them to support the campaign.

Among them was Dame Caroline Dinenage, Conservative MP for Gosport, Hampshire, who had already signed Mr Halfon’s application for the backbench debate.

She says: ‘Too often consumers are caught at the sharp end of extortionate waiting times when on the line to businesses. I fully support Money Mail’s campaign to end this bad practice.’

Last night, more MPs indicated they would support the motion for a debate after Money Mail contacted their offices.

Simon Jupp, MP for East Devon, agrees, saying: ‘Consumers care about customer service, even if many big businesses don’t. ‘It’s about time these firms sorted out their inadequate response times.’

Damian Green, MP for Ashford, Kent, adds: ‘Firms have a responsibility to be available to their customers, just as government departments should pick up the phone to callers.’ 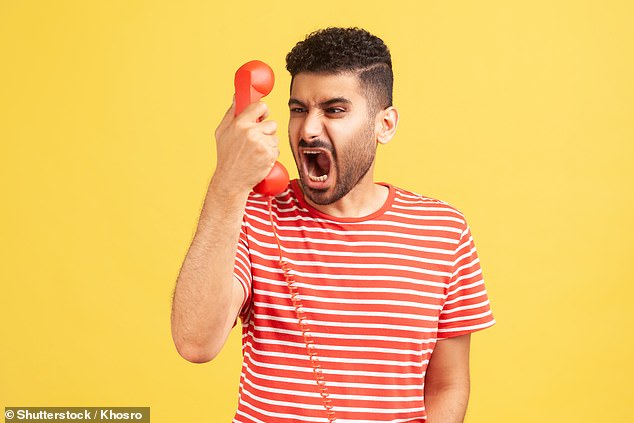 Sir Mike Penning, MP for Hemel Hempstead, says: ‘Answering calls in a quick time is a basic service customers are paying for. It should be part of a legal requirement for utility companies.’

Earlier this month, a similar consumer law was approved in Spain. It will mean that Spanish firms will face fines of up to £85,000 if they do not answer their phones in three minutes.

The rule will apply to companies that make more than €50 million (£43 million) a year and have 250 staff or more.

Draft letter to send to your MP

I am writing to you today because I am concerned

I am supporting Money Mail’s campaign to update

consumer protection laws to give regulators the

power to fine firms that keep customers on hold for

of Commons on behalf of your constituents.

In your response can you outline how you intend to

address this issue on my behalf.

Please keep me informed of any progress made.

And for Money Mail readers, a law such as this in the UK cannot come soon enough.

One told us she had spent eight hours over three days trying to speak to somebody at British Airways’ Executive Club, to no avail.

British Airwars says its current average wait time is 12 minutes, adding that it is ‘doing everything we can to help serve our customers quickly’.

Another 82-year-old reader told us she had attempted to contact Shell on three occasions, waiting for more than an hour on one try.

A third reader wrote: ‘I am 80 and do not have a smartphone. I am frustrated about making calls to providers where an automated voice asks me questions which I cannot answer with my phone.’

Our proposal is simple: we want to update the Consumer Rights Act 2015 with a statutory instrument — a form of secondary legislation which can make changes to an existing Act of Parliament.

Under our plan, this statutory instrument would give regulators such as Ofgem and Ofcom the power to fine firms who do not answer the phone in ten minutes.

It would be up to them to monitor compliance and decide how the fine is calculated.

Ofcom, which regulates telecoms providers, says its maximum penalties differ and it is often the higher of a fixed sum or a percentage of the business’s turnover.

The Financial Conduct Authority can hand out unlimited fines to firms under its remit, like banks.

Our proposal is possible as similar updates have been made to the Consumer Rights Act already.

For example, the Supplier Guaranteed Standards of Performance for Switching introduced an automatic compensation payment of £30 for customers who experienced delays or mistakes when they switched energy supplier.

The MPS calling for change… so what’s yours waiting for?