MPs have called for a ban on two Chinese CCTV systems that are used by councils, schools, and police forces across the UK.

A group of 67 MPs and Lords including Lib Dem leader Sir Ed Davey and four ex-Conservative ministers is urging the government to ban the sale and use of Hikvision and Dahua cameras.

The calls come amid concerns the CCTV cameras can recognise faces, eavesdrop on conversations, and judge people’s moods.

The Uyghurs, a predominantly Muslim ethnic group, are the majority population in Xinjiang.

More than a million Uyghurs and other minorities are estimated to have been detained at camps in Xinjiang, where allegations of torture, forced labour and sexual abuse have emerged.

Hikvision and Dahua have been accused of providing equipment to be used both for the general surveillance of the people of Xinjiang and to guard government-run concentration camps in the region.

China has denied the allegations, and claimed the camps are “re-education” facilities used to combat terrorism.

A report by campaign group Big Brother Watch released in February claims that many public bodies across the UK are using Hikvision or Dahua cameras.

This includes UK councils, secondary schools, NHS trusts, universities, and police forces, according to the report.

Many of the cameras have advanced features, including microphones and the capacity for facial and gender recognition and distinguishing between people of different racial groups.

Some cameras can analyse behaviour — detecting, for example, if a fight might be breaking out. Others can even judge moods, track via heat-sensing and learn patterns of behaviour, so as to highlight any unusual activity.

‘Both brands are becoming increasingly dominant in the UK, with almost two thirds of public bodies who responded to Big Brother Watch’s mass Freedom of Information requests admitting to using Chinese-made CCTV,’ the report reads.

The report claims that the CCTV cameras have also been used in China’s north-west region of Xinjiang, to monitor Uyghurs at camps.

‘The Uyghurs, a predominantly Muslim ethnic group, are the majority population in Xinjiang,’ the report states.

‘They are subjected to a brutal campaign of persecution and repression by the Beijing regime.

‘A massive state surveillance apparatus with huge technological capability monitors the population while thousands of people are detained in detention camps that the Chinese government claims are anti-extremism education centres.’

China has denied these allegations and maintains that the camps are ‘re-education’ facilities.

However, while Big Brother Watch admits that there’s a ‘significant difference’ in how the cameras are used in China and the UK, it warns that the level of uptake in Britain is ‘alarming’.

‘Big Brother Watch is opposed to mass surveillance in all its forms,’ it concluded.

Following the report, MPs are echoing calls for a ban on the sale and operation of the cameras in the UK.

They are also calling on the government to commission an independent national review of the use of CCTV in the UK. 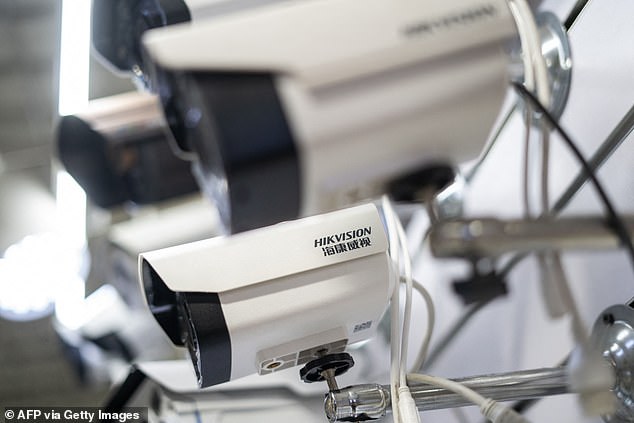 Some cameras can analyse behaviour — detecting, for example, if a fight might be breaking out. Others can even judge moods, track via heat-sensing and learn patterns of behaviour, so as to highlight any unusual activity

Speaking to the BBC, Hikvision maintained that it honours human rights throughout its business operations.

‘CCTV has always played a critical role in the UK in the fight against crime and terrorism. Hikvision is proud of the role we play in that,’ a spokesperson said.

‘The UK also has fringe groups who would like to see a massive reduction of CCTV in the UK who are willing to throw allegations around about CCTV, and who would lie to demonise Hikvision.

‘Hikvision has always worked with government bodies to provide solutions to the UK’s CCTV requirements’.

Meanwhile, Dahua has previously said that it follows ‘all applicable local, national and international laws, regulations and conventions.’

The MPs’ calls come as discussion of the Procurement Bill resumes in Parliament today.

An amendment to the bill would allow potential suppliers to be excluded because of concerns about human rights abuses.

HOW DOES FACIAL RECOGNITION TECHNOLOGY WORK?

Facial recognition software works by matching real time images to a previous photograph of a person.

Each face has approximately 80 unique nodal points across the eyes, nose, cheeks and mouth which distinguish one person from another.

A different smart surveillance system (pictured) can scan 2 billion faces within seconds has been revealed in China. The system connects to millions of CCTV cameras and uses artificial intelligence to pick out targets. The military is working on applying a similar version of this with AI to track people across the country

This produces a unique numerical code that can then be linked with a matching code gleaned from a previous photograph.

A facial recognition system used by officials in China connects to millions of CCTV cameras and uses artificial intelligence to pick out targets.

Experts believe that facial recognition technology will soon overtake fingerprint technology as the most effective way to identify people.