MPs overwhelmingly backed the controversial Rule of Six in a Commons vote tonight –  but Boris Johnson was left in no doubt about the anger on the Tory backbenches.

The Covid-19 regulations which enforce the rules on gatherings in England was passed by 287 votes to 17 – a majority of 270 –  in Westminster.

The regulations are already in force, with the motion simply offering a retrospective vote on it. But a slew of Tories indicated they would abstain rather than support it, using the debate before hand to attack Government ministers over the scope of the rules.

Steve Baker, a former Brexit minister said: ‘I have real concerns about the very high cost of these measures … Absolutely appalling set of costs which people are bearing and the anecdotes now increasingly rising of poor compliance, indeed people seem to have a gap between their intentions to comply versus what they actually do.’

He added: ‘It’s not clear now that the benefit outweighs the costs of lockdown. We have to ask whether this set of circumstances is really what we want.

Steve Baker, a former Brexit minister said: ‘I have real concerns about the very high cost of these measures 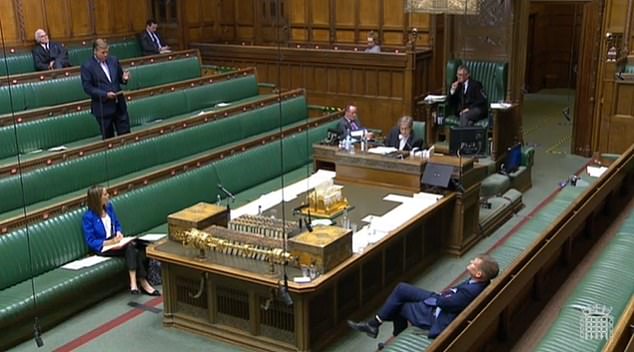 Before the vote, Sir Graham Brady (top left), chairman of the 1922 committee of Tory backbenchers, asked whether the Government had considered a ‘rule of eight’ instead.

‘This is a devastating social impact on our society and I believe that people would make different choices were they the ones able to take responsibility for themselves.’

Bexhill Tory MP Huw Merriman added: ‘Now I look for that evidence, but I still don’t see it.

Ministers are under pressure from Tory MPs to scrap the Rule of Six and the 10pm curfew in England, amid claims such intrusive measures are not justified by the evidence and damage the economy.

The Government was braced for a potential backbench rebellion tonight, but Labour leader Sir Keir Starmer said his party would back the Government.

Before the vote, Sir Graham Brady, chairman of the 1922 committee of Tory backbenchers, asked whether the Government had considered a ‘rule of eight’ instead.

During a Commons debate on Covid-19 regulations, he said: ‘Can she (health minister Helen Whately) share with us her estimate of the efficacy of the rule of six compared to that of a rule of eight had that been introduced instead.

‘Is the rule of six more or less effective than a ban on household mixing?’

He added: ‘These rules are a massive intrusion into the liberty and private lives of the whole British people, and they’re having a devastating economic effect as well which will result in big job losses and masses of business failures.’

And former international development minister Sir Desmond Swayne took aim at the rule of six and the lack of justification offered by the Government, telling the Commons: ‘Can I suggest (a rule of) 10 then we can count them on our fingers, that would be simple enough, wouldn’t it?’

Shadow health minister Justin Madders questioned what would happen at Halloween, asking: ‘It’s always a busy night for the police but this year they will have the added burden of breaking up groups of children if they become too big.

‘So, given those children probably spent all day with the very same kids at school in groups far larger than six, I say good luck to the officer who tries to explain to them why their parents are going to get a fine for this.

‘If that’s what’s going to happen, I’d be grateful if the minister could confirm that, I think there’s going to need to be a very clear public message and campaign on this – or will there be an exception?’