Move over Cape Canaveral, Cornwall is about to become epicentre of UK’s world class space industry – this is a race Britain MUST win

Think of Cornwall – and cream teas, rugged cliff walks, surfing and golden beaches come to mind. But move over Cape Canaveral: Cornwall is about to become the epicentre of the UK’s world class space industry.

Sir Richard Branson’s Virgin Orbit is due in September to launch a rocket from Newquay containing satellites from the likes of the Sultanate of Oman and shoebox-sized ‘Cubesats’ from the Ministry of Defence.

It will be the culmination of years of home-grown innovation and Government efforts to position the UK ahead of European rivals, including by developing seven prospective ‘spaceports’ that will allow the UK to become a launch hub.

Built up over decades, space is one of Britain’s biggest unsung business success stories, employing more people than the steel industry.

The sector is already worth £16.4billion and is a hotbed of technology. It provides more than 45,000 high-value jobs across an estimated 1,300 companies. Steel, by contrast, accounts for just 33,000.

By many measures, we are coming third in the international space race, chasing only the US and China.

Experts believe there is an opportunity for the UK to become the world’s leading space finance centre, just as the City led the world with the famous Lloyd’s of London insurance market in the 17th and 18th centuries during the golden age of maritime trade.

Richard Franklin, head of the UK space division at aerospace giant Airbus, says getting ahead now could ‘create a huge catalyst for investment’ that would attract ‘the world’s best entrepreneurs and businesses’.

But Virgin Orbit’s big moment and the wider future of the sector are being overshadowed by foreign predators keen to hoover up cutting-edge technology, including Chinese-backed Eutelsat, the French operator that has this month unveiled plans to merge with British satellite group OneWeb.

The proposed deal has been greeted with harsh criticism. Former Science Minister George Freeman – who quit his role just three weeks ago – has claimed the deal will hand over more pioneering technology to overseas rivals on the cheap.

The OneWeb controversy comes in the wake of the £5.4billion sale of another satellite firm, Inmarsat, to a US rival and a string of swoops on aerospace and defence firms. Mark Boggett, managing director of London-listed space investment trust Seraphim Capital, is keen for people to think of the industry beyond rockets and focus on how technology in space can help us here on Earth.

Seraphim’s investments include Satellite Vu, an environmentally-oriented group which collects infrared data that can measure the carbon footprint of everything from manufacturing sites to homes and farms.

This month, another Seraphim firm, Altitude Angel, was part of groundbreaking plans unveiled by Ministers at Farnborough Airshow to develop the world’s first drone delivery ‘superhighway’.

So far, the Government has been keen to push the sector, unveiling a UK Space Strategy last year that outlined the need for billions of pounds of investment.

Whoever wins the current Prime Ministerial race will be under pressure to keep it at the front and centre of policy. Kevin Craven, the head of aerospace and defence industry body ADS, says the reality is that takeovers will keep occurring because UK firms are undervalued compared with those in other nations.

But he insists a law that came into force in January – the National Security and Investment (NSI) Act – which allows the Government to screen and intervene in mergers in a range of sensitive industries, was a positive development. For Franklin at Airbus, one of the most important things is getting young people excited about space, which will encourage more to look at careers in science and technology, where there are big skills shortages.

He says: ‘We saw people get interested when [British astronaut] Major Tim Peake went to the International Space Station in 2015 and 2016. I think a lot of people will see rockets going into space now from the UK and be excited about that.’

They laughed – but we’re close to a launch 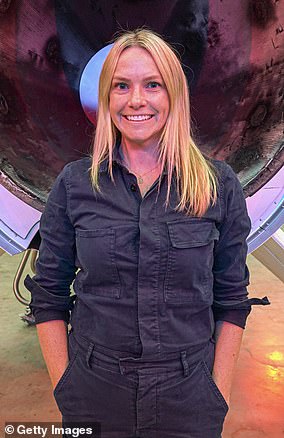 The dream of Newquay entering the space race was once dismissed as a joke, says Melissa Thorpe, head of Spaceport Cornwall.

‘When it was first announced, people laughed – because you can’t imagine a spaceport in Cornwall,’ she says of the project, which could stage its first orbital launch within the next two months.

‘But that announcement was eight years ago. Now it’s feeling very real.’

This autumn, Virgin Orbit’s Cosmic Girl aircraft will take off from Newquay Airport carrying a rocket to be released over the ocean. The launch, at night, will be Virgin Orbit’s first outside the US.

Thorpe, a Canadian, says her ambitions go far beyond the initial launch. The rockets are currently manufactured in Long Beach, California, but Thorpe wants Spaceport Cornwall to start constructing its own rocket factory within five years.

‘The UK builds a huge majority of the world’s small satellites at the moment,’ she says. ‘But they all get shipped overseas to launch.

‘Obviously we have an opportunity to control and monitor our own assets going into space. That sovereign launch is more important geopolitically now than ever before. Especially with what’s going on with Russia.’

Thorpe says the Cornish hub has already been ‘inundated’ with inquiries from global businesses which are keen to experience the ‘red carpet service to space’.

‘We’re looking at launching two to three times a year in the next five years,’ she says. ‘The plan will then be to max out at about 12 launches a year.’

Spaceport Cornwall has unlocked access to space with investment just shy of £20million.

Thorpe predicts the hub will result in the creation of 180 direct jobs with more to come as the industry grows.

‘Cornwall is one of the most deprived areas in Europe,’ she says. ‘We see huge opportunity for jobs and economic growth.

‘What we want to do here is to service a launch capability for the UK, but at the same time develop an infrastructure here that can support not just Virgin Orbit but other launch companies and other space businesses.’