Savers lose out as CPI inflation spikes AGAIN to three-year high of 2.5% with fuel and food costs soaring while interest rates remain near record-lows

Fears over inflation mounted today as the CPI rate spiked again to 2.5 per cent – the highest level in nearly three years.

The headline rate for June was up from 2.1 per cent the previous month, with food and motor fuel major factors.

The official figure again overshot the expectations of analysts, who had predicted an annual level of around 2.2 per cent. It is the fourth consecutive month in which CPI has increased, although many prices are rising from a low level due to the pandemic.

Some analysts are now suggesting that inflation could reach 4 per cent by the end of the year – which would be double the Bank of England’s target.

Anxiety has been growing about the potential for prices to run out of control worldwide in the wake of the coronavirus crisis, with huge spending by government and new money created to help keep economies afloat.

Yesterday it emerged that consumer inflation in the US had hit 5.4 per cent, well above expectations.

The 2.5 per cent headline for June was up from 2.1 per cent the previous month, with food and motor fuel major factors.

‘The rise was widespread – for example, coming from price increases for food and for second-hand cars where there are reports of increased demand.

‘Some of the increase is from temporary effects – for example, rising fuel prices, which continue to increase inflation, but much of this is due to prices recovering from lows earlier in the pandemic.

‘An increase in prices for clothing and footwear, compared with the normal seasonal pattern of summer sales, also added to the upward pressure this month.’

Shadow Treasury minister Bridget Phillipson said: ‘This morning’s data reveals that British businesses are struggling to access the supplies and the staff they need, which is causing shortages and driving up prices for UK consumers.

‘The Government must do all it can do to keep materials and other supplies moving to prevent shortages, including cutting the unnecessary red tape following the EU-UK agreement, and providing much better training so that we have access to the skills we need here in the UK.’ 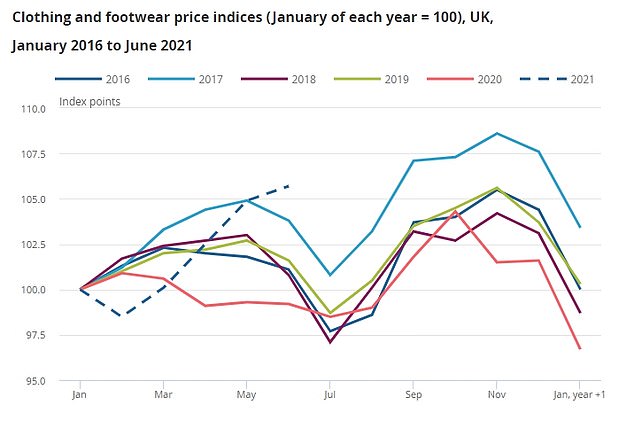