By Elizabeth Haigh For Mailonline

A mountain rescue dog named Isla has been praised as a hero after finding a couple who became lost after climbing Scafell Pike on New Year’s Day.

Keswick Mountain Rescue Team was called out shortly after 5.30pm on Sunday to England’s highest peak in the Lake District after two people and a dog became lost on their return to Seathwaite after successfully completing their climb.

Sharing the mission with their social media followers, a spokesperson for the team said Isla ‘suddenly bolted’ away from the search and rescue team.

They followed in pursuit, only to find she had stopped running and was barking loudly to indicate that she had found the lost couple.

Isla (pictured) successfully found the couple down in a gully on their return from Scafell Pyke, far from the main paths 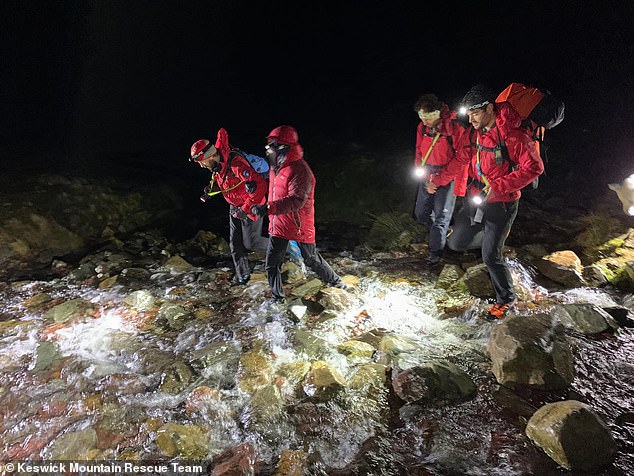 The rescue team was comprised of nine members, and was called at just after 5.30pm on New Year’s Day

Keswick mountain rescue team hailed the ‘amazing’ pets and the passer-by for their potentially life-saving intervention.

The large-scale search was undertaken by nine team members and Isla, and the operation lasted almost four hours.

The couple had made it to the top of Scafell Peak before becoming confused on their descent.

Although they initially corrected their mistake, they then got lost a second time near to Sty Head Pass.

A spokesperson for Keswick Mountain Rescue said one of the party at this point ‘suffered a panic attack’ while trapped on steep ground, and so called 999 for Mountain Rescue.

Fortunately, they were well-equipped and had head torches, and were able to find a mobile signal nearby to call the emergency services and give an approximate location.

A small team then went out with Isla to try to locate the missing couple.

The rescue team had already conducted an extensive search when they decided to separate and search several paths for the couple. 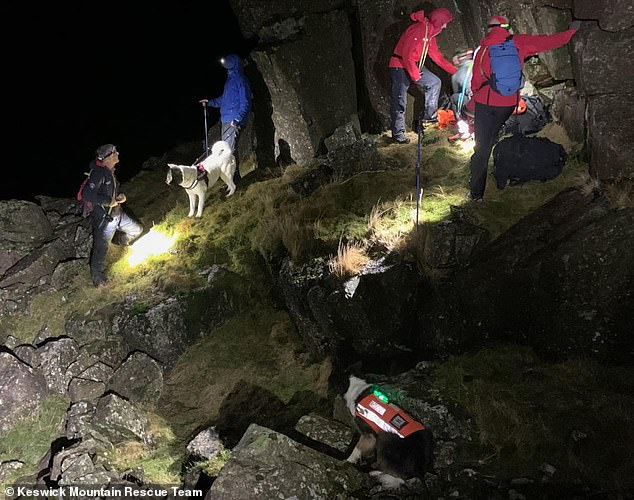 After Isla (bottom of image) found the couple, the team ensured they were unhurt before walking them back to Seathwaite

As they were making the plan, however, search dog Isla ‘bolted off away and down a steep gully away from the main paths’.

The spokesperson continued: ‘We gave chase only to find Isla barking as she had successfully located the couple, an excellent and impressive find.

‘It is doubtful if we alone without Isla would have found the couple as they were hidden in a steep-sided gully away from the paths.’

The couple were found safely and then walked back to Seathwaite by the rescue team.

The team’s followers were quick to praise Isla for her hard work and bravery.

Marilyn Nichols said: ‘It’s fabulous when there’s a happy outcome – it’s a little shot of dopamine to read a post like this. Isla – here’s a scratch round your ear.’

Many recognised her ‘amazing’ skills, and even joked she was clearly the ‘star of the show’ in the team.

The call was the team’s second of 2023 having been earlier deployed to rescue two women near Great Gable, one of whom had broken her ankle in snow and wind.

In total there have been three call-outs in 2023 for the Keswick team, in what proved to be a dangerous period into the New Year across the UK’s slopes.

One man was killed and another injured after an avalanche on Ben Nevis on December 30 led to them plunging around 2,000ft.

A helicopter as well as the Lochaber mountain rescue team were tasked with the rescue, which lasted around eight hours.

The man’s Labrador and Golden Retriever appeared to recognise the urgency of the situation and could have saved the man’s life.

Eyewitnesses said the black Labrador ‘incredibly’ rushed towards a nearby walker, barking and gesturing at her to follow back to the owner.

Meanwhile, his golden retriever was found lying beside the unconscious man, at which point the woman dialed 999 for help.