Motorsport legend Paddy Hopkirk MBE has died at the age of 89, his family has confirmed

Motorsport legend Paddy Hopkirk MBE has died at the aged of 89.

Hopkirk is most famous for winning the 1964 Monte Carlo Rally in a Mini Cooper S and is among the most decorated and highly-regarded racing drivers Northern Ireland has ever produced.

A statement issued by his family said Hopkirk ‘passed away peacefully’ on Thursday 21 July at Stoke Mandeville Hospital in Buckinghamshire.

Born in Belfast in 1933, Hopkirk went on to become one of the country’s most accomplished motorsport icons.

He is survived by his wife Jenny, their three children Katie, Patrick and William, and his six grandchildren.

The statement from the family read: ‘It is huge sadness that we announce the sad passing of Paddy Hopkirk.

‘First and foremost, Paddy was a loving husband, father and grandfather, whose passing will leave a huge hole in the lives of those closest to him.

‘But Paddy also leaves an incredible legacy of motorsport and business success, while his hard work in support of the British motorsport and wider car industry continued until his final days.

‘His family, friends and fans will never forget his sharp wit and wicked smile. He brought fun and joy to anyone in his company and inspired many.’ 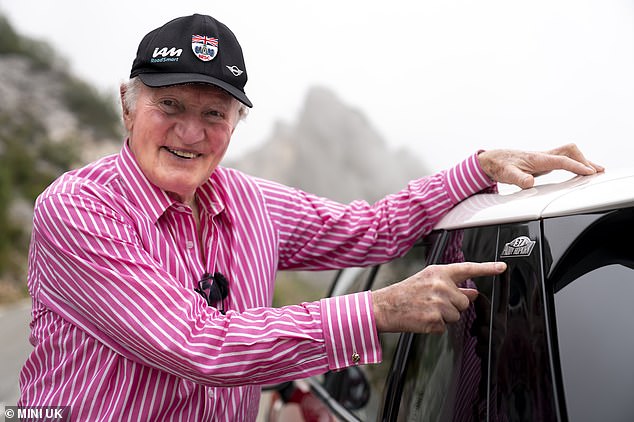 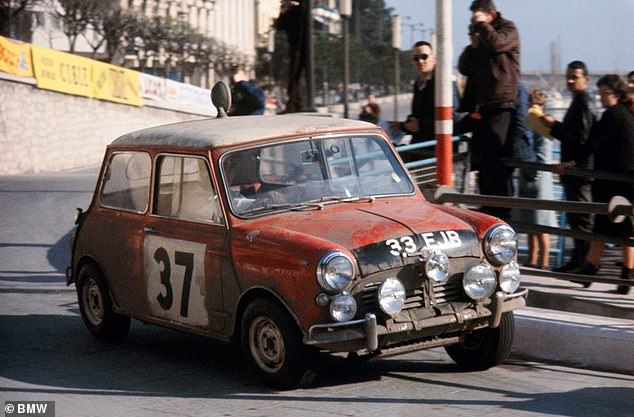 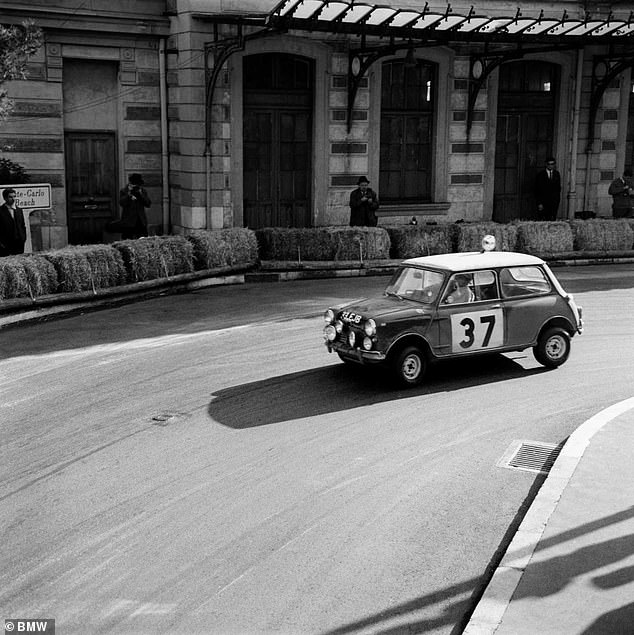 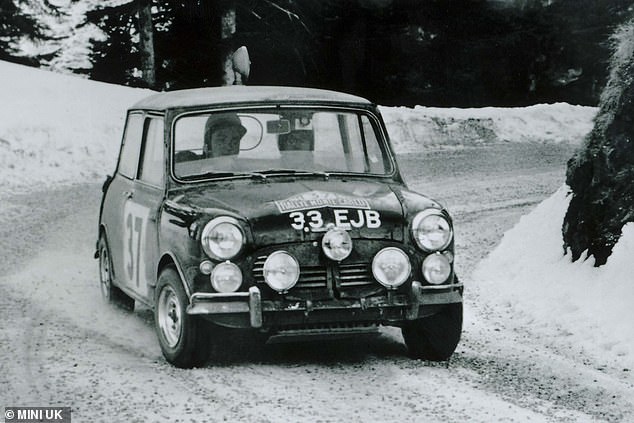 Paddy Hopkirk and co-driver Henry Liddon are the most recent all-British crew to have won the legendary Monte Carlo Rally, in which they beat competitors in far more powerful machines

Undeniably, his most decorated achievement is taking the famous red and while Mini Cooper S to victory at the ’64 Monte Carlo Rally with Henry Liddon as his co-driver.

The pair beat competitors in far more powerful machines, which were no match for the Mini’s nimbleness and sharp handling.

The number 37 Mini became an instant icon, as did Hopkirk, who received telegrams of congratulation from Prime Minister Sir Alec Douglas-Home as well as from the Beatles – it read: ‘It’s nice to be No 1 isn’t it? Stop’ and was accompanied by a signed photo from the band with the message: ‘You’re one of us now Paddy!’

Hopkirk’s success in Monte Carlo saw the Northern Irish racer receive the Freedom of the City of Belfast and his victory was also marked by an invitation to the popular Sunday Night at the London Palladium TV programme, in which he drove the Mini onto the stage to rapturous applause. 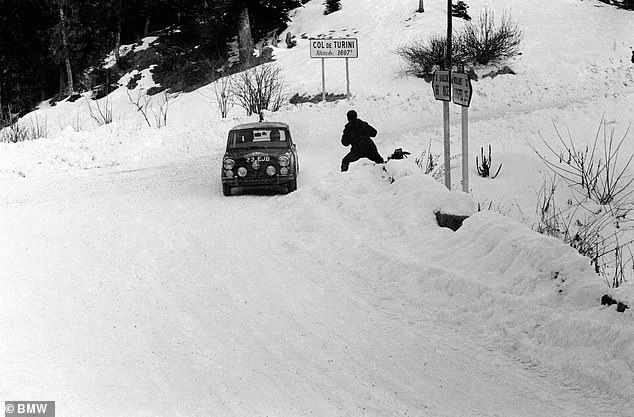 The 1964 win (pictured) was repeated in 1965 and 1967 in the hands of Hopkirk’s Finnish team mates Timo Mäkinen and Rauno Aaltonen. Both were inducted into the Rally Hall of Fame alongside Hopkirk in 2010 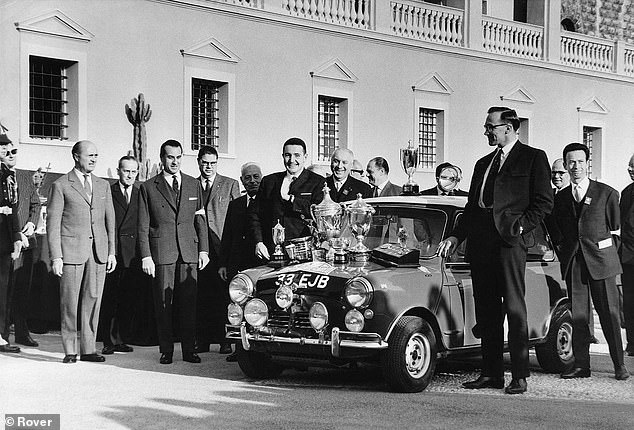 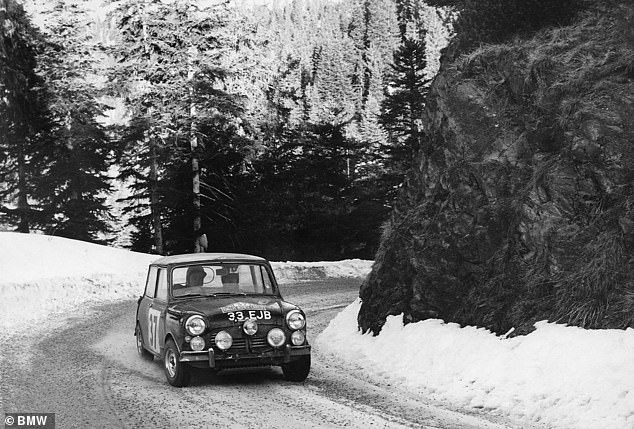 And his racing accomplishments didn’t end there.

He was also a five-time winner of the Circuit of Ireland, a two-time Hewison Trophy champion and Acropolis Rally winner, to name just a few of his achievements.

He competed in a number of endurance races, too, including three finishes at the 24 Hours of Le Mans, winning his class at the Spa 24 Hours in Belgium and entering the Targa Florio in the mountains of Sicily on four occasions.

He also travelled to the US and Australia to compete in the Sebring 12 Hours and Bathurst 500 respectively. 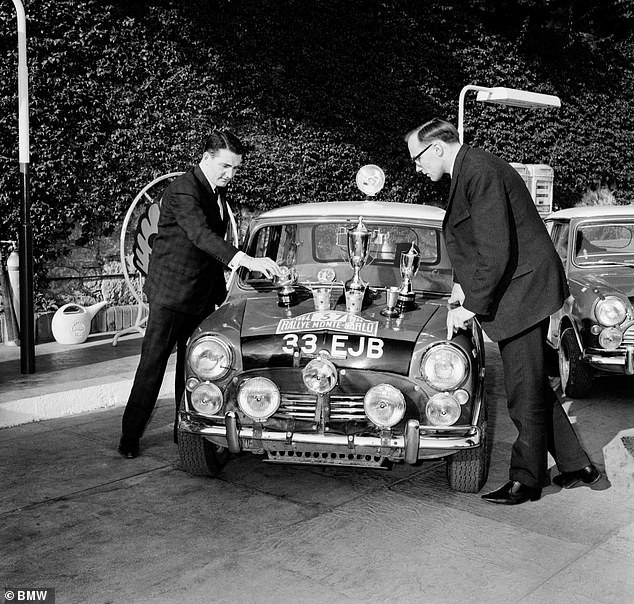 Shortly after winning the race, Hopkirk was invited to appear – with his race car – on Sunday Night at the London Palladium 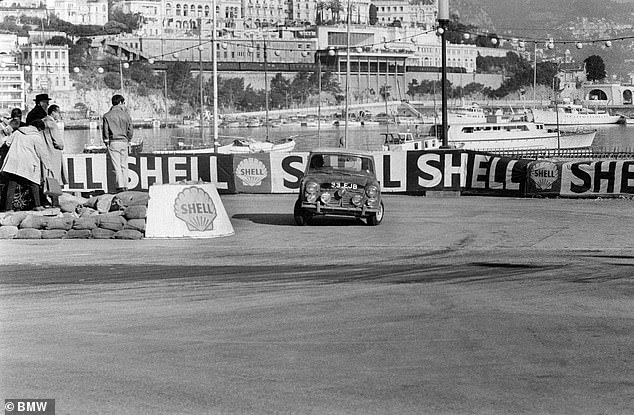 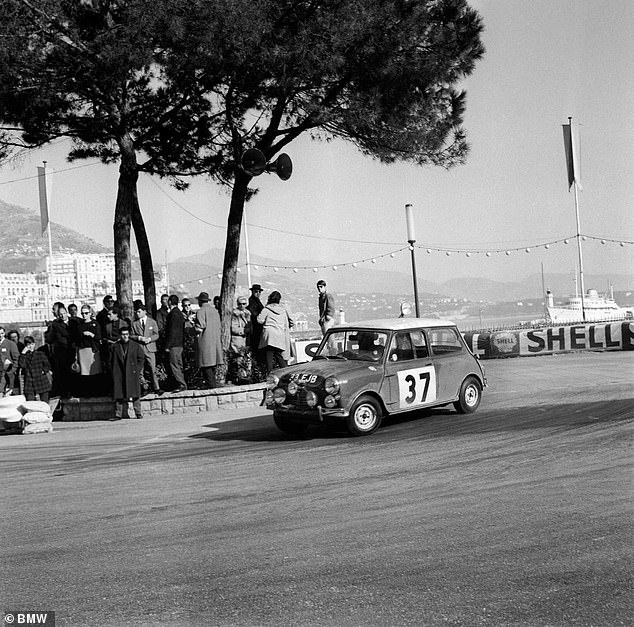 The number 37 is synonymous with the Mini racing car, as is the 33 EJB number plate it donned in 1964

At the end of his professional racing career, Hopkirk moved into several businesses and maintained an ambassadorial role with Mini under its BMW Group ownership.

In 2020, Mini commemorated his 1964 Monte Carlo Rally victory with a special edition version of the current Mini Cooper S. Just 100 were made with the legendary ’37’ on the doors.

He was among the first four inductees into the Rally Hall of Fame in 2010, alongside Timo Makinen, Rauno Aaltonen and Erik Carlsson, and was awarded an MBE in the 2016 New Year’s Honours List.

Despite being known as a ferociously fast racer, Paddy also wanted to encourage safer driving. In 2016, he became a volunteer for IAM RoadSmart as its Mature Driver Ambassador, travelling the UK talking about road safety and how older people can drive safely and with confidence on today’s roads.

A year later in 2017 at the age of 84, Hopkirk was elected president of the British Racing Drivers’ Club that owns Silverstone circuit.

The family’s statement says details of a memorial service will be announced at a later date.

In 2020, Mini’s parent company BMW marked his racing achievement with the release of a special-edition Cooper S hatchback 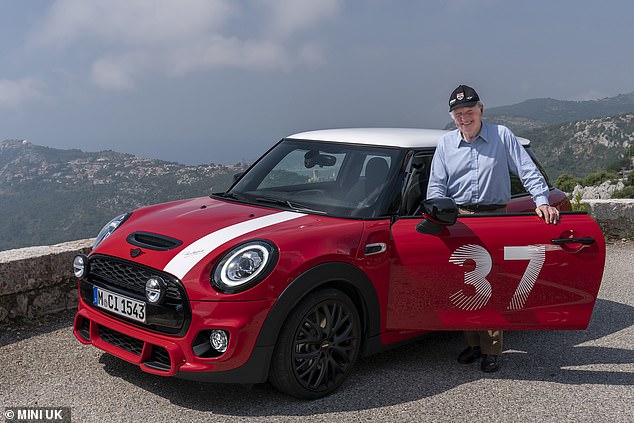 Just 100 examples of the car were produced and all had the number 37 on the door and a Paddy Hopkirk signature on the bonnet strip. Paddy pictured with the model in 2020