A mother has revealed how she added £110,000 to the value of her three bedroom home by doing the majority of the renovations and redecorating herself.

Lyndsey Gyane, 42, bought the three-bedroom house in Halewood, Liverpool, with her partner in April 2018 for around £170,000 and thanks to her incredible renovations the property is now worth £280,000.

The transformation of the house was documented on her Instagram account Home At 242 which now has 157,000 followers.

And the proud DIY enthusiast, who did most of the redecorating herself says she’s managed to make her ‘three bed semi in Liverpool’ look like a half a million pound house.

‘While we have hired people to do the major renovations, I’ve done most of it myself, all the decor is done by me,’ she told the Liverpool Echo.

‘People look at it on Instagram and think it’s a half-a-million-pound house, but it’s not, it’s just a three-bed semi in Liverpool.

Lyndsey Gyane, 42, bought the three-bedroom house in Halewood, Liverpool, with her partner in April 2018, and transformed it with an extension and extensive redecoration. Sun loungers lie along the side of the new lawn on brand new grey paving slabs that stretch from the back of the house down to the end of the garden 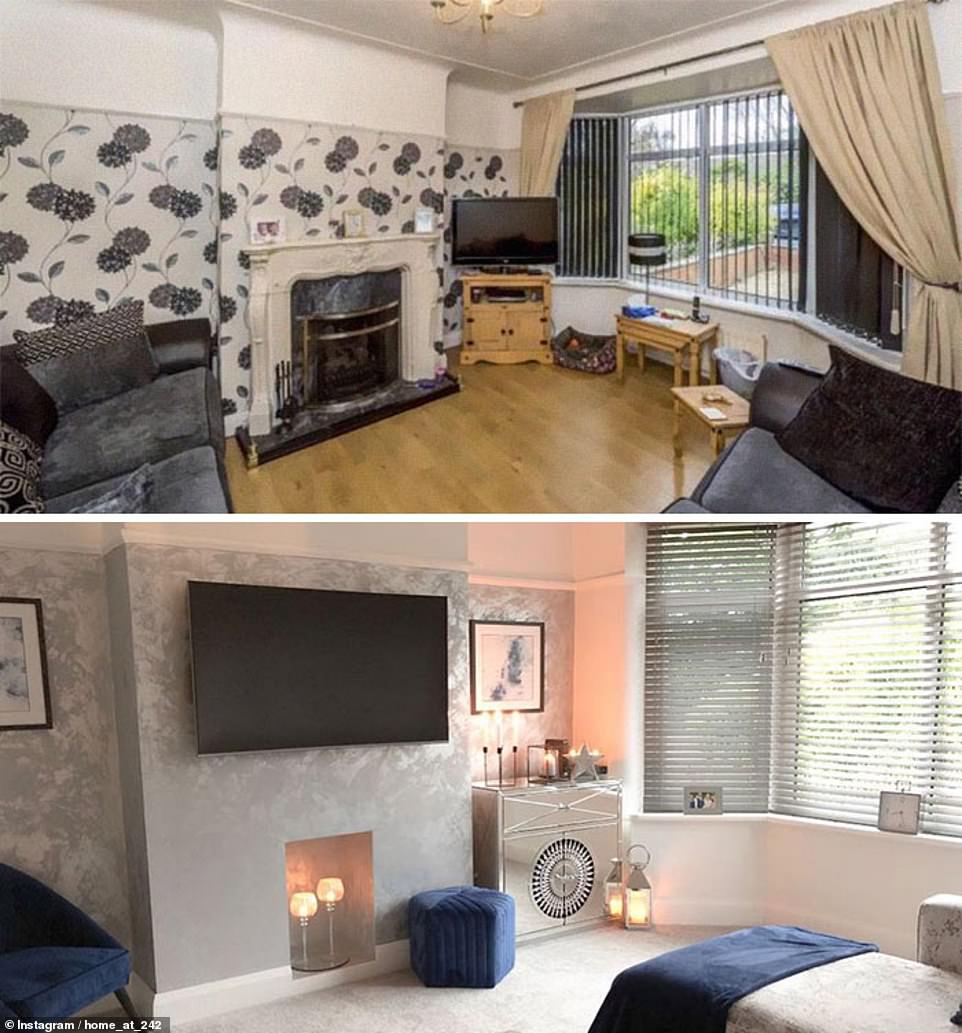 The living room was also given a makeover, with fresh carpet having been fitted in the room, a brand new TV hung on the chimney breast. Shiny wallpaper now adorns one wall of the room which used to be two-toned (pictured above) 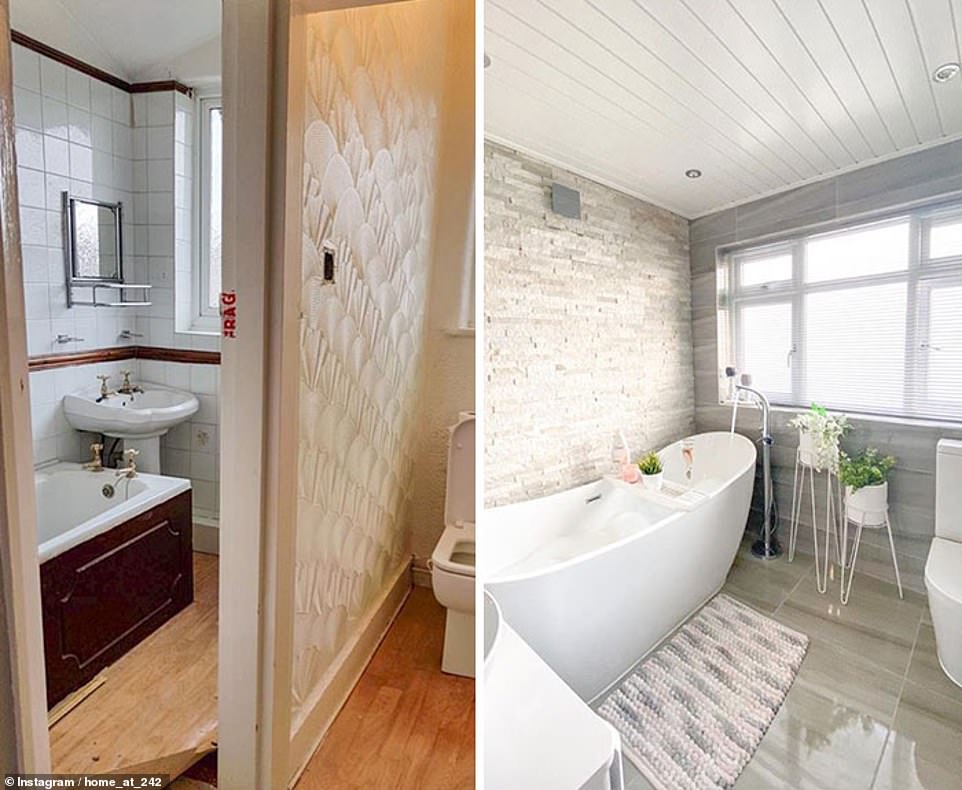 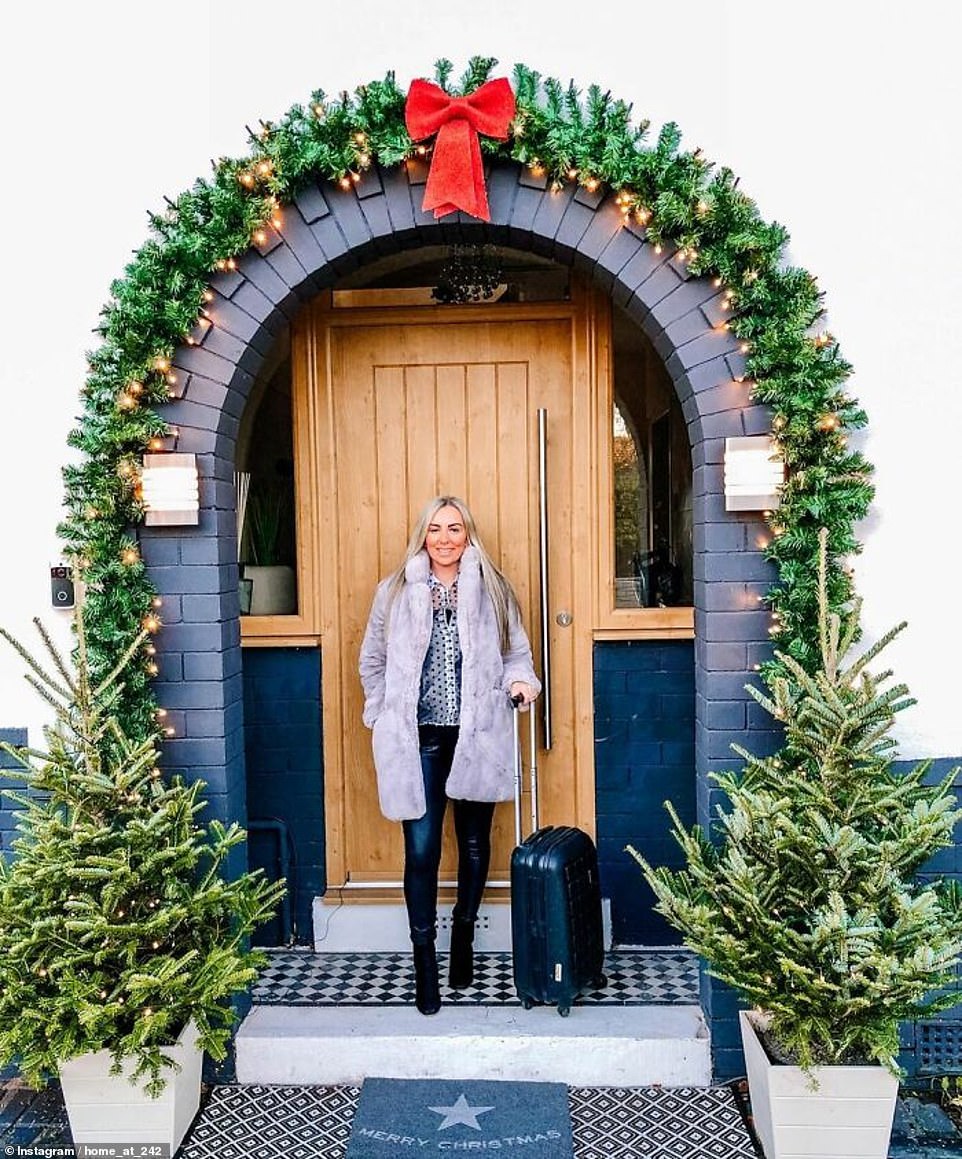 Lyndsey always knew the home had potential – but had never taken on a DIY project of this kind before.

However, through determination and hard work, she and Shaun have created the ‘perfect family space’.

‘We’ve created the perfect family space to enjoy and we wouldn’t change a thing,’ she said. ‘We had tradesmen do the building work, but we designed it and worked with the architect to do the drawings exactly how we wanted it.

‘I also made some changes to the design once the building work started as I could visualise it better.’ 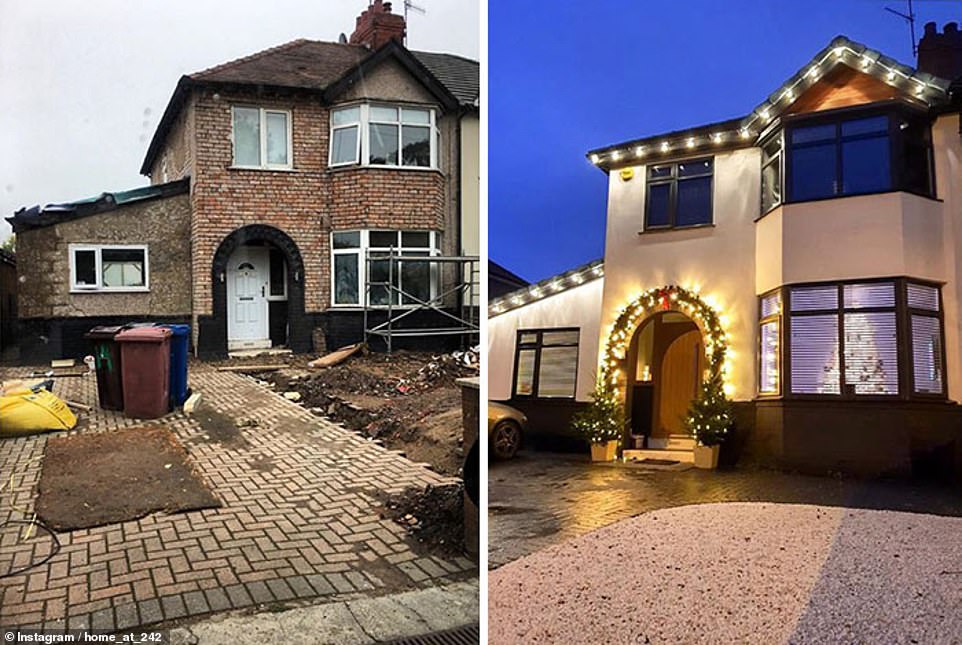 The outside of the house has been given a complete facelift by Lyndsey and her renovation project. A new driveway was installed, new windows fitted, a new porch and front door were also introduced 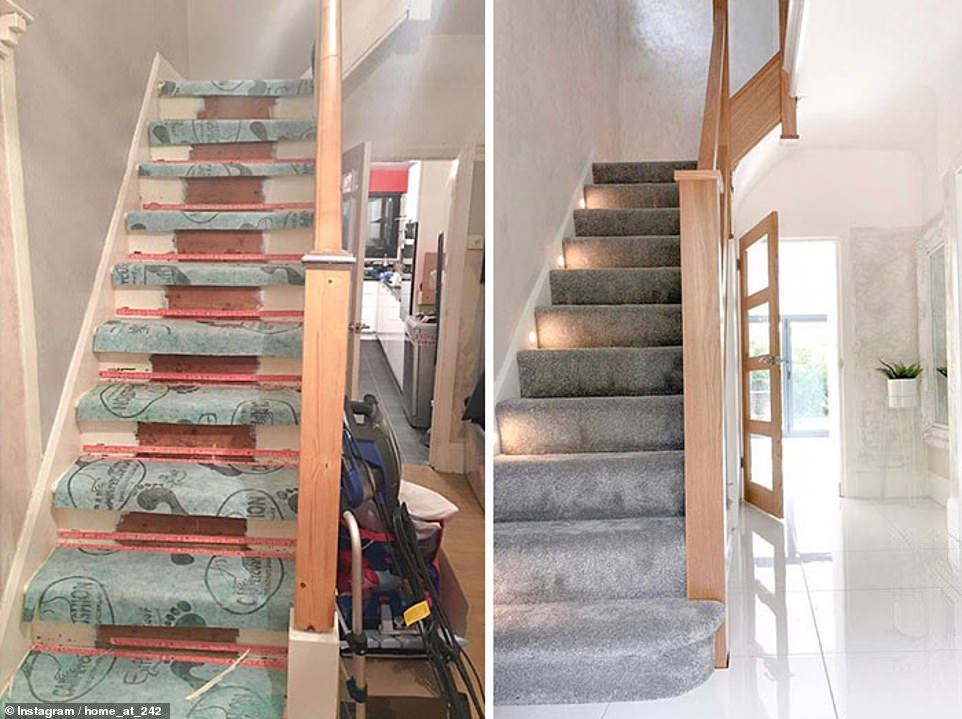 The staircase and accompanying bannister were modernise with a new carpet and fresh paint on the walls. The hallway and flooring were also redecorated to be white and make the hallway feel bigger

The home is now unrecognisable with modern features such as an electric fire replacing the old traditional fireplace in the living room, a modern open-plan kitchen and a spa-style bathroom – the result of knocking down the wall between the toilet and the bathroom.

The living room also has a skylight, while in the hallway the couple have ripped out the old wooden bannister to the second floor and replaced it with a contemporary glass bannister.

The pièce de résistance however, is the garden with its sun spot and grey tiling, accessible through the kitchen and gorgeous bifold doors. 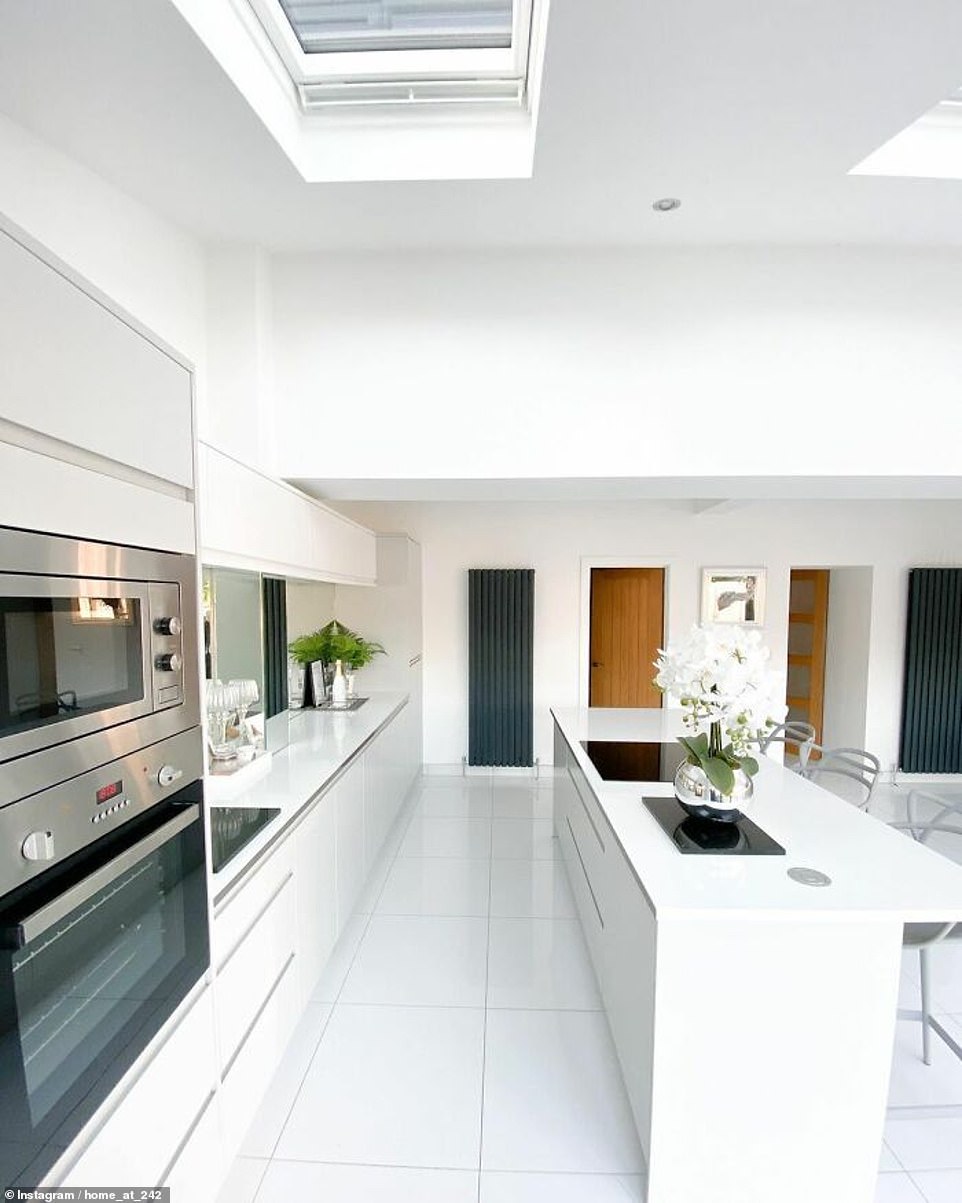 Lyndsey’s kitchen is one of the most striking rooms in the renovated house, with gleaming white surfaces and silver trimmings making the entire room feel spacious and modern 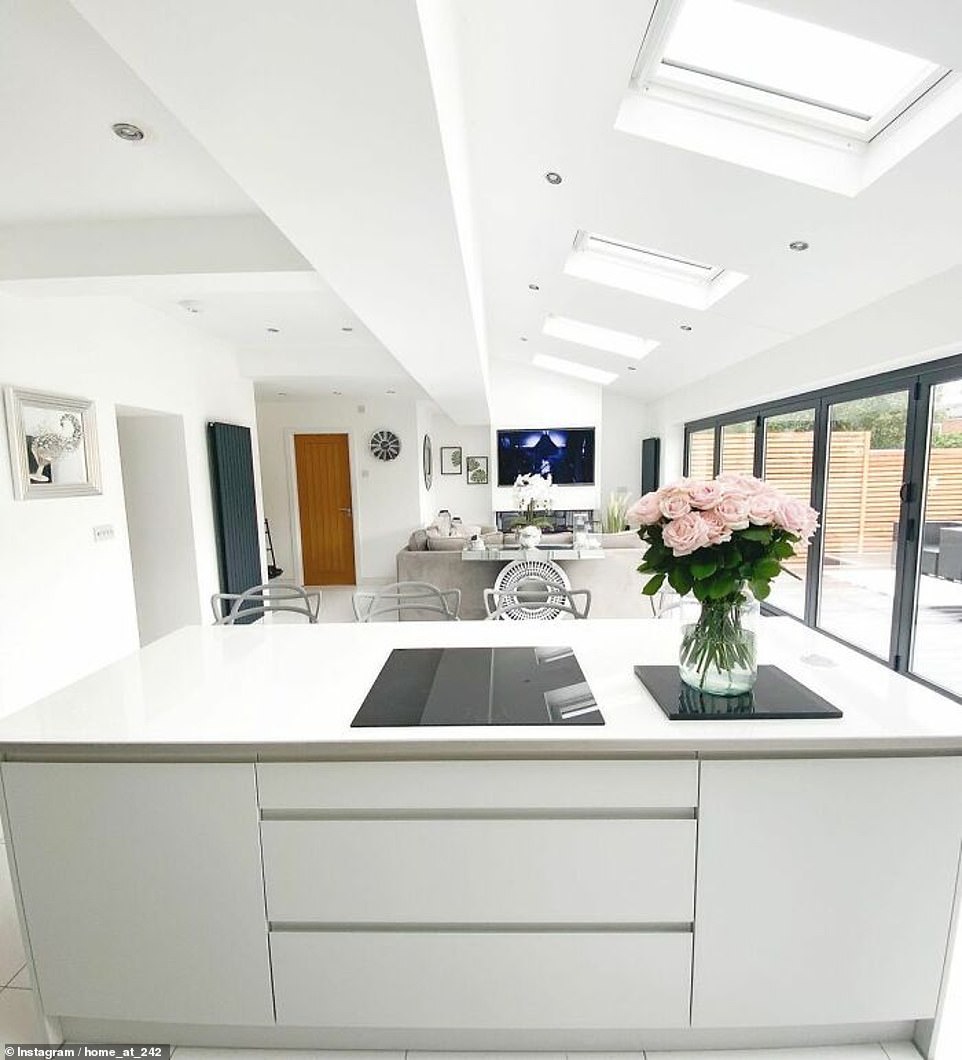 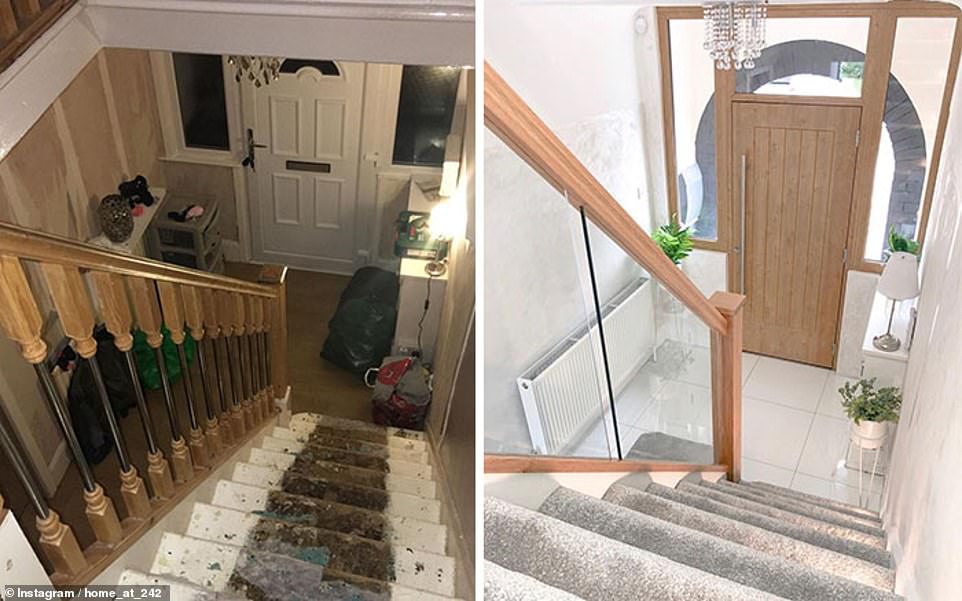 Before and after: The entrance to the house is unrecognisable now that work on it has been finished. A new wooden door brings the space into the 21st century and the plants bring the whole space to life 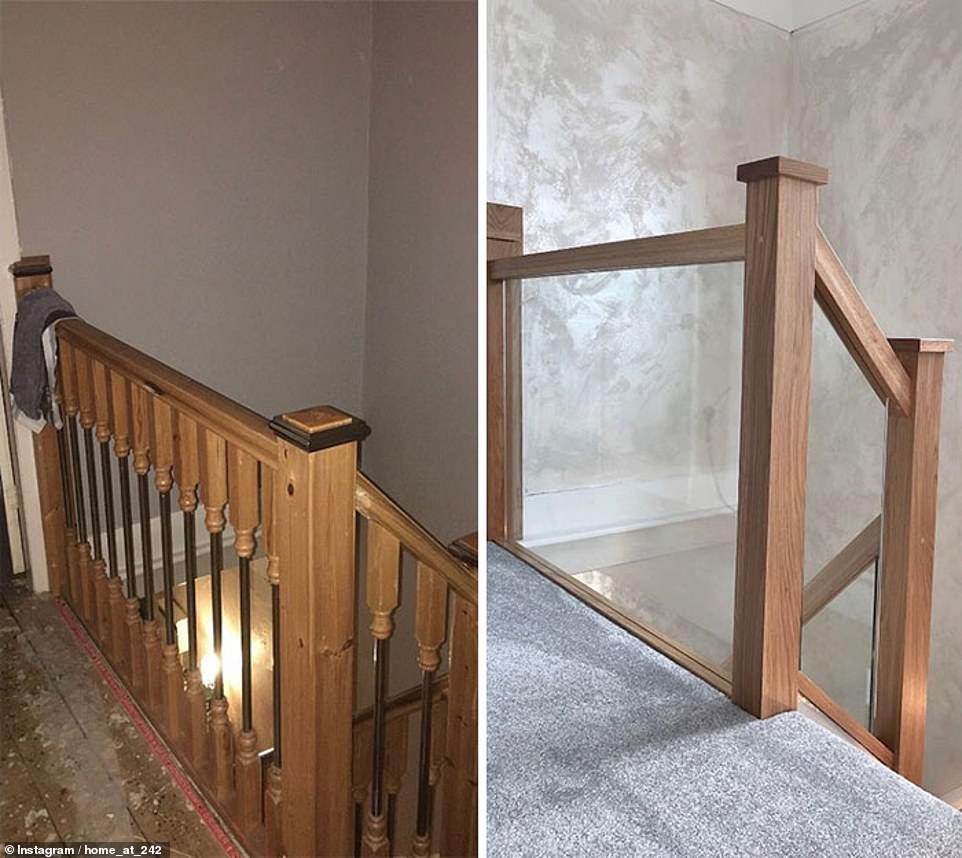 As for the exterior, the roughcast surface has been replaced with a bright white shade.

Lyndsey’s added that her favourite room is ‘the extension and the bathroom’, which features a huge tub.

The couple decided to document their project on Instagram and have since the start racked up more than 130,000 followers on their account Home At 242.

The DIY expert now shares tips with her loyal fans and is loving spending time in her new beautiful home. 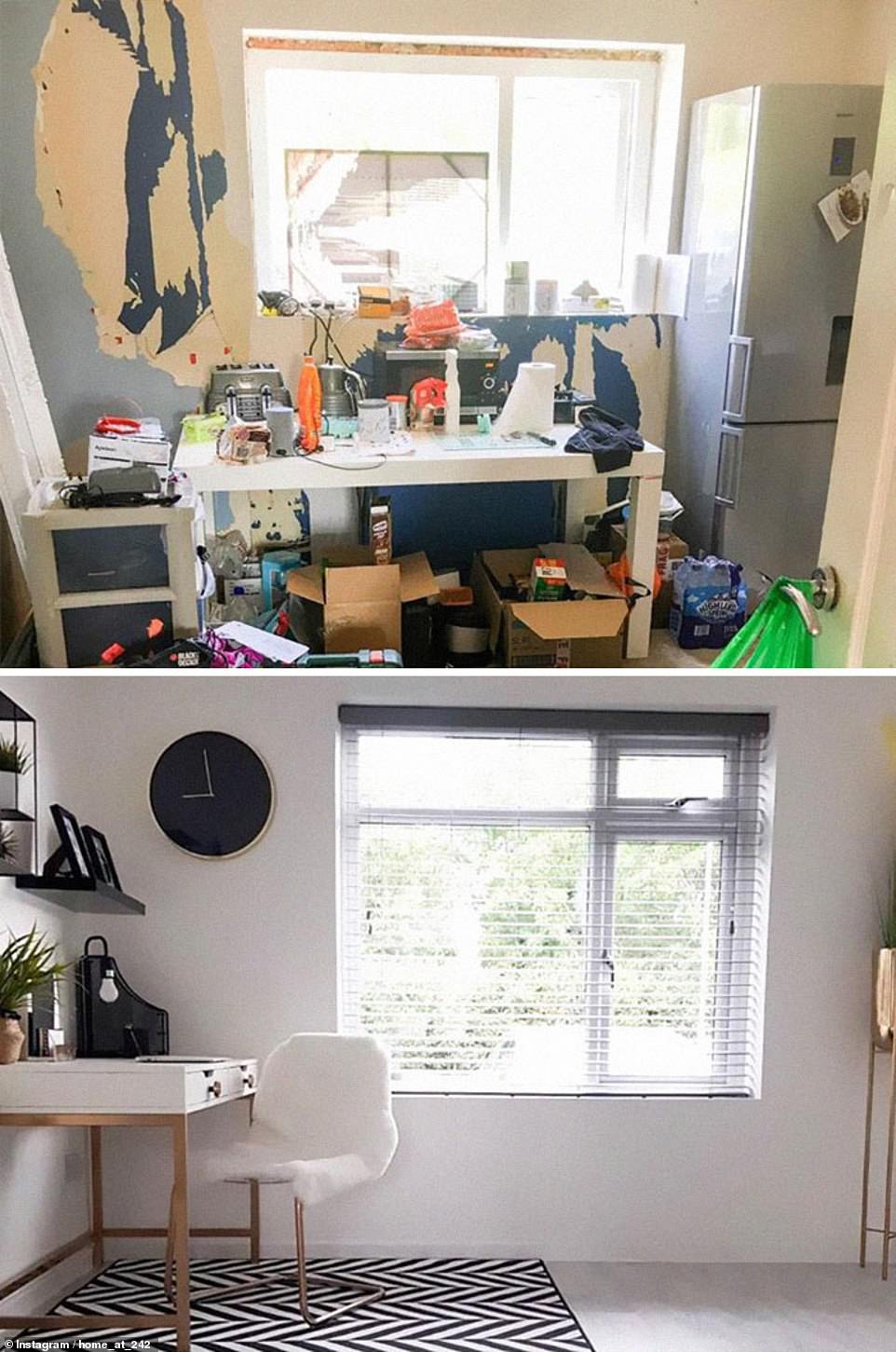 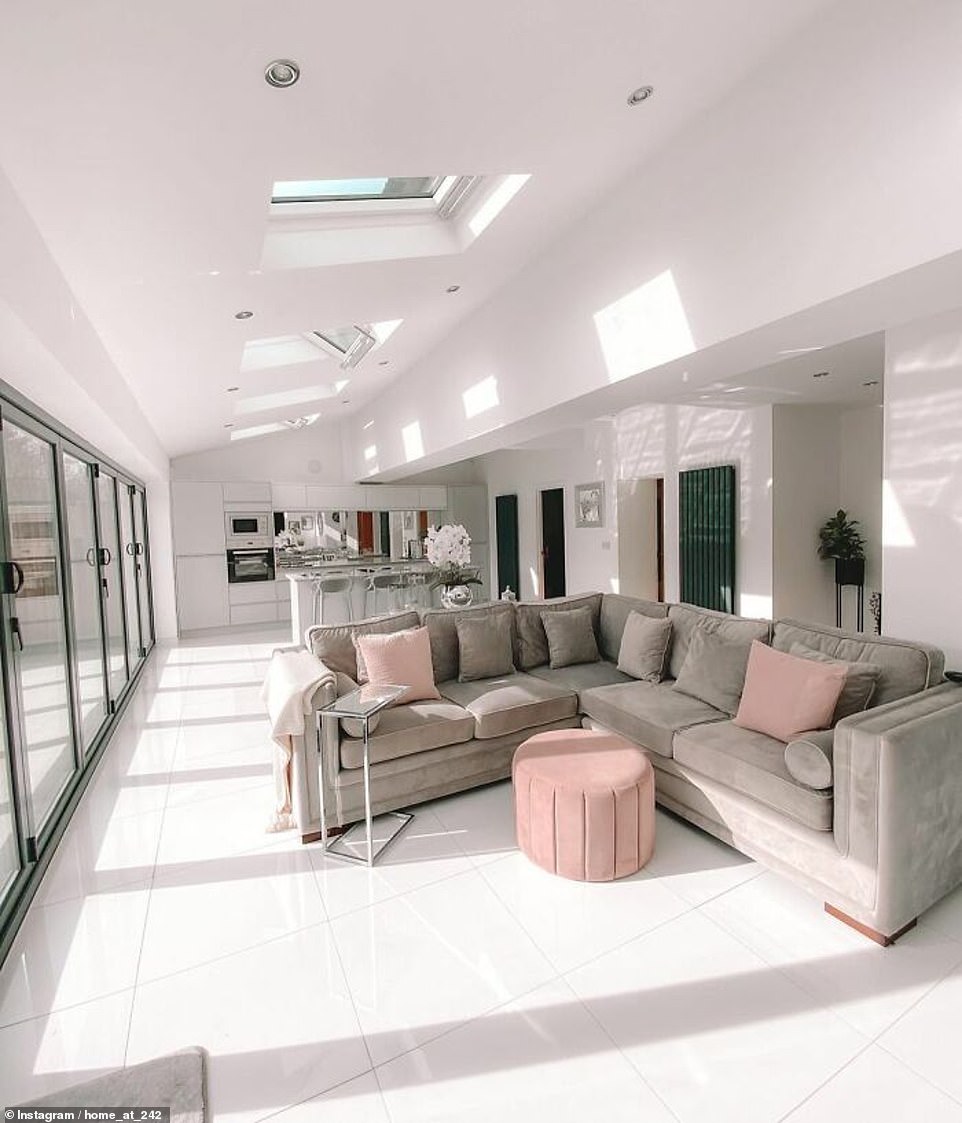 From the other side: The long kitchen/conservatory room looks stunning from both ends of the room 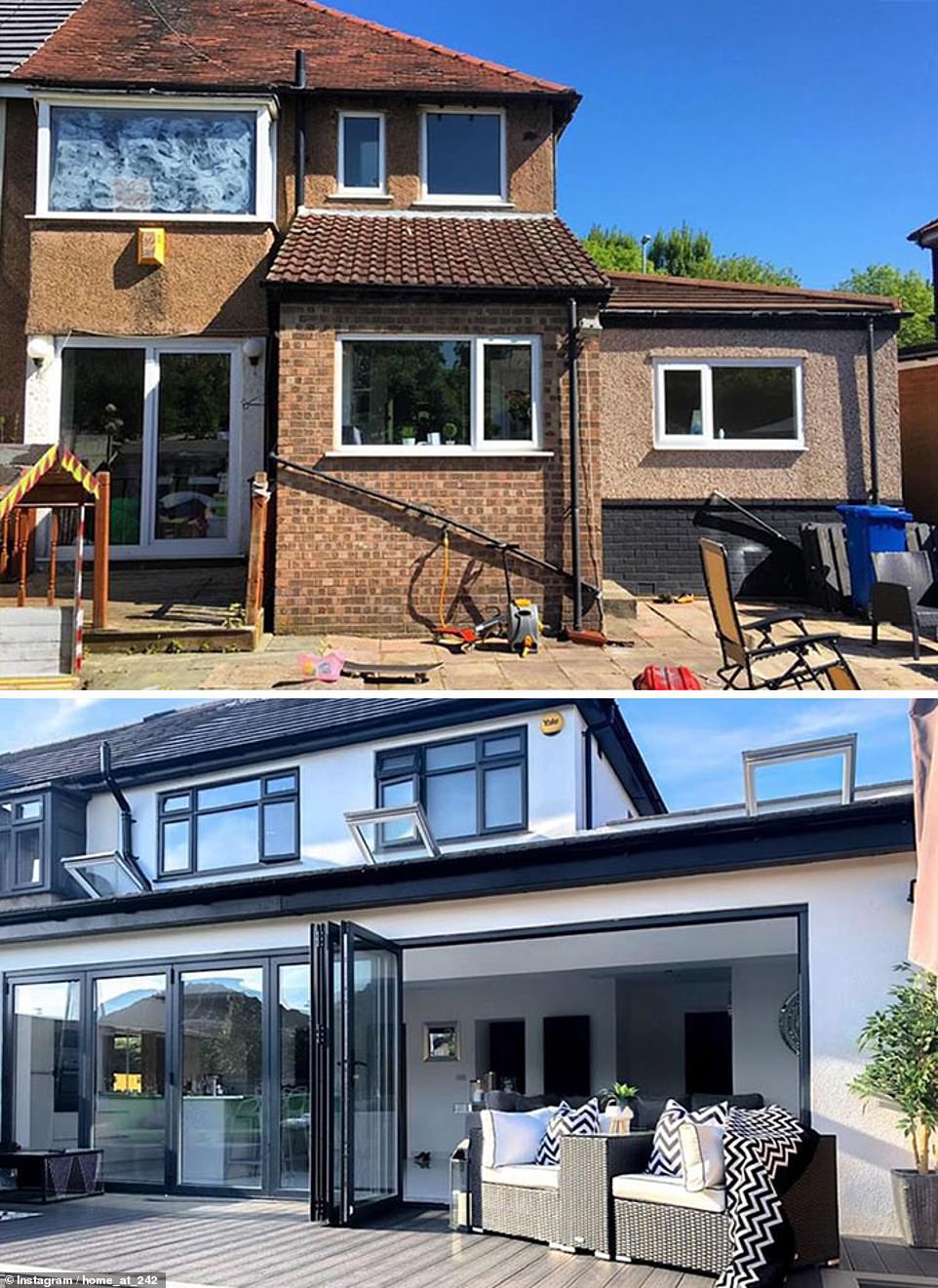 Glow up: The back of the house saw some of the biggest pieces of work undertaken, but the results are incredible 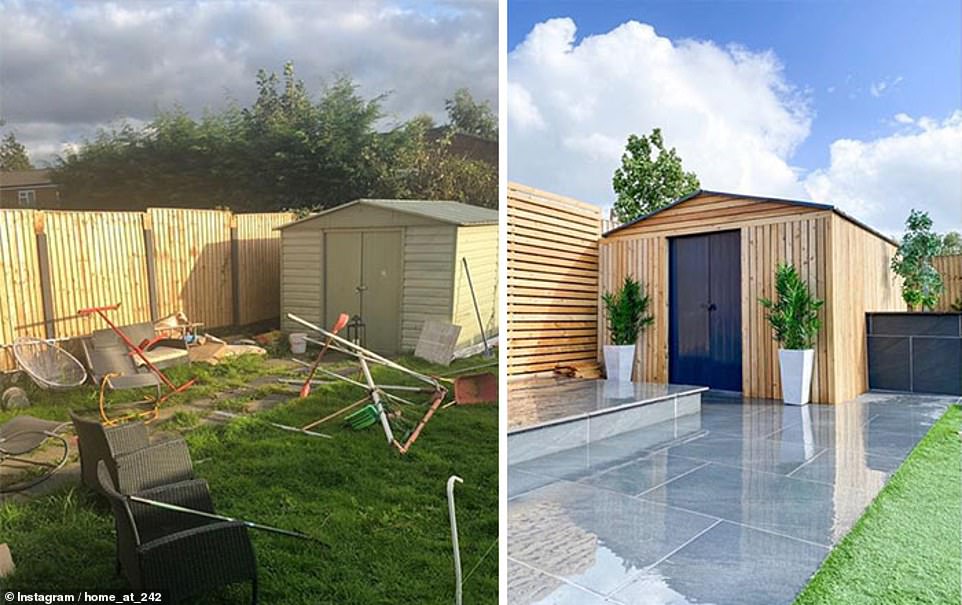 Even the shed has been given a makeover, which shiny new paving slabs placed all around it, new wood panels and plants to decorate either side of the doors