A mother whose husband and daughter died after being thrown overboard from their speedboat has said she will never be able to ‘move on’ from the tragedy but has reached a ‘moment of acceptance’.

Victoria Milligan, 48, and her husband Nick, 51, had been on a family holiday in Padstow, Cornwall, with their four children Kit, Amber, Olivia and Emily, when they were thrown from their boat into the Camel Estruary in May 2013.

Ms Milligan’s husband Nick and daughter Emily were killed in the accident, which saw the empty speedboat circle out of control at high speed before hitting the family, while the mother-of-four lost her left leg.

Now, seven years on from the tragedy Ms Milligan, has spoken about how she and her family were ‘moving forward’ with the memories of Nick, who was an executive at Sky, and Emily, who was eight-years-old when she died.

Victoria Milligan (pictured), 48, has spoken about the reaching a ‘moment of acceptance’ following the deaths of her husband Nick, 51, and daughter Emily 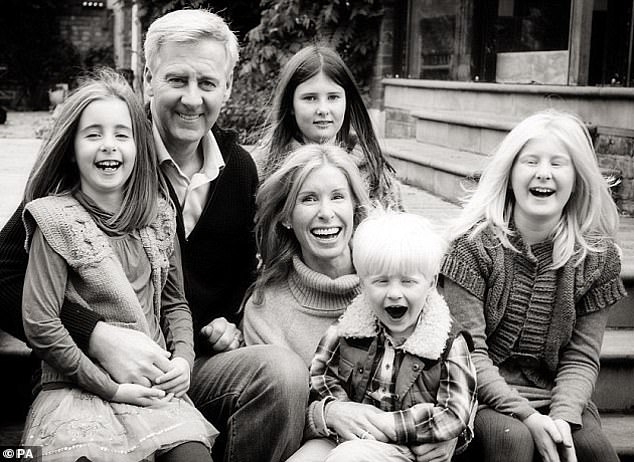 Pictured: Victoria, centre, with, from left to right, Emily, Nick, Olivia, Kit and Amber. The family were on holiday in Cornwall on Nick’s speedboat when the accident occurred 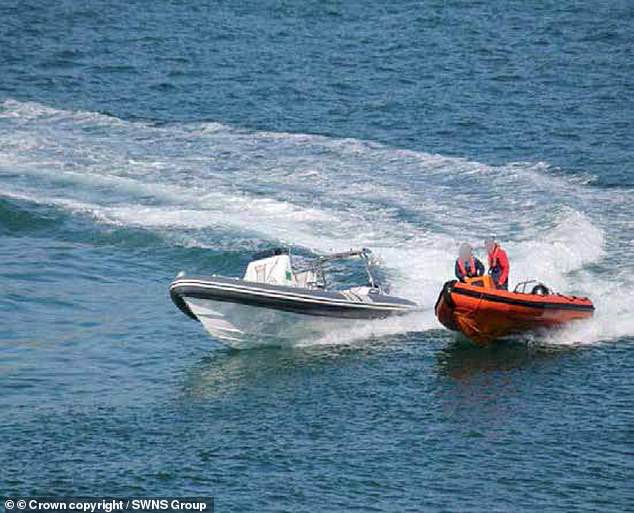 The family were thrown overboard into the water from their speedboat in Padstow, Cornwall, May 2013. Pictured: Rescuers prepare to board the out-of-control speedboat in the Camel Estuary, Cornwall

Speaking to Andy Coulston on the podcast Crisis What Crisis? the mother-of-four, who married Nick in 1999, said the family had been visiting their holiday home in Cornwall when the horrific accident took place.

She said: ‘It was a beautiful day, first time we had taken it out that year. We’d had an amazing morning rock climbing and splashing in the sea. We were just have a really lovely family bank holiday weekend together.’

However shortly after realising the tide was going out, the family were thrown from their speedboat doing a sharp turn.

Ms Milligan continued: ‘The six of us were flung into the freezing cold water, all in life jackets. The kill cord hadn’t been attached to either of us. That’s the safety device attached to the boat when someone goes away form the engine control.

‘The first thing I saw when I came up was the boat going around in very tight turns so it was just a perfect storm of events with the kill cord, tide gong out, slip on the accelerator and the boat just coming back to us in very tight very fast circles.’

She added: ‘It was so noisy and loud and adrenaline is just pumping through your body at the time and almost a king of stubbornness of this will all be fine it will all be ok. I couldn’t hear any screaming or anything.

‘The RNLI boat came alongside ours and  a brave crew member jumped into our boat to stop the engine and then it was weirdly eerily quiet.

‘I was quite badly injured and I remember seeing blood in the water not knowing if it was coming from me or Kit because I couldn’t actually feel anything because of the cold and adrenaline is pumping through your body.

‘I do then remember Amber shouting ”daddy’s dead, daddy’s dead”. So a 12-year-old girl had seen Nicko in the water. It doesn’t really bear thinking about.’ 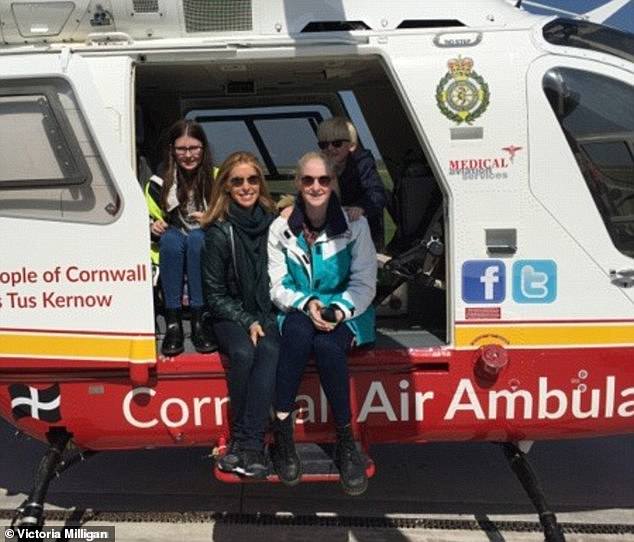 Ms Milligan with Olivia, left, Amber and Kit, right, in the Cornish Air Ambulance after raising £250,000 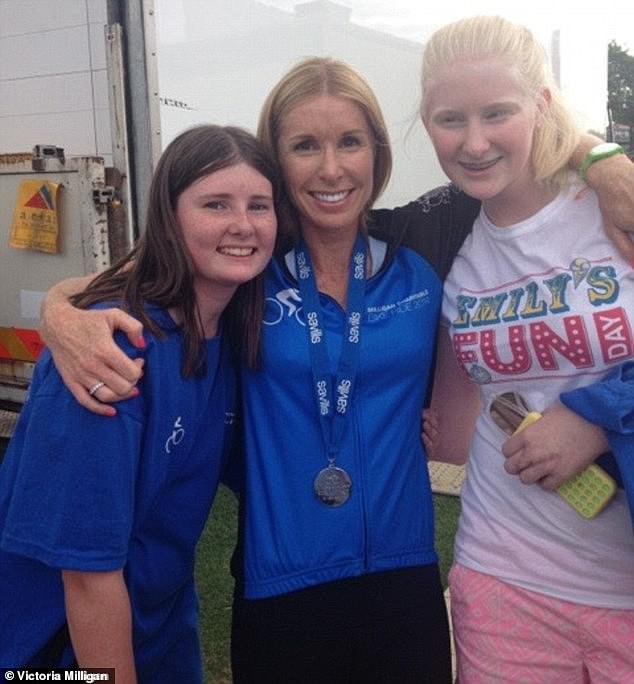 The mother-of-four with daughters Oliver, left, who was uninjured in the crash and Amber, right, who was left with scars on her left thigh and hand 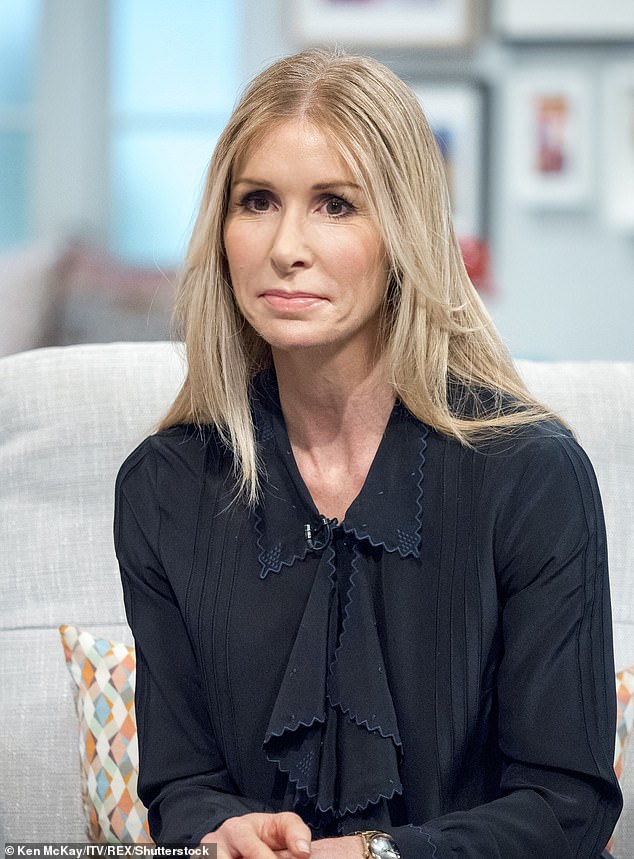 The family were rescued by an RNLI and Ms Milligan lost the lower part of her left leg.

Kit required 12 operations to save his, while Amber was left with scars on her left thigh and hand. Only Olivia survived unscathed.

Now, years on from her ordeal the personal trainer, who has learned to walk again with a prosthetic limb and is now training to be a grief counsellor, said she would ‘never ever get over’ the pain of losing her family but had reached ‘the moment of acceptance’.

She said: ‘I hate that phrase: moving on, getting over it. Because why should I get over it? Grief is the honour of the love we had for those people.’

She added: ‘I do feel at this seven-year period that maybe I’ve finally reached the moment of acceptance. I think we’re all in a good place.’

Despite her trauma, Ms Milligan said she and her family would now be heading back to Cornwall to visit Emily’s favourite beach and visit Nick’s favourite golf course.

Ms Milligan continued: ‘I do feel that Nick and Emily move forward with us in our lives and we had so many happy memories down there that to block off somewhere that was such a happy part of out life feels like the wrong thing to do even though I do arrive and get a bit of a stab in the heart of woe. Memories coming flooding back.’

She added: ‘I very much felt in the first few years I was just surviving.

‘I was a bit of a robot going through the motions of life and parenting and food and choosing schools and there was no joy there was no fun and it was such a contrast to our life before which was happy and upbeat and positive and joyous and I thought this is just not fair on them. It’s not fair on me.

‘We’d had such an incredible life and we’d worked so hard to have a good life with Nick and Emily and yes they’re not here and that is desperately sad but they are never going to be here physically and we have to try and find a way as a way of honouring their memory and living a great life without them physically present.’