An alleged ‘jihadi bride’ appeared in court yesterday in connection with the Extinction Rebellion blockade of newspaper printers.

Natalie Bracht, 45, was seen grinning and raising her fists in the air after being released on bail.

Two years ago, the mother of nine made headlines over claims she had fled the UK in 2014 and travelled to Syria where she married an Islamic State fighter.

She was among 81 people arrested in Broxbourne, Hertfordshire, and Knowsley, Merseyside. Home Secretary Priti Patel said that she was ‘disgusted’ by the attack on the Press.

Yesterday policing minister Kit Malthouse told MPs: ‘As a Government we will not stand by and allow the livelihoods of hard-working people to be undermined by a minority using the pretence of tackling climate change to impose an extremist world view.’

He said he and the Home Secretary would ensure police had the ‘powers required to deal with the disruption’.

Miss Bracht is the only person so far to have appeared in court. Those charged over the weekend’s XR protests include: 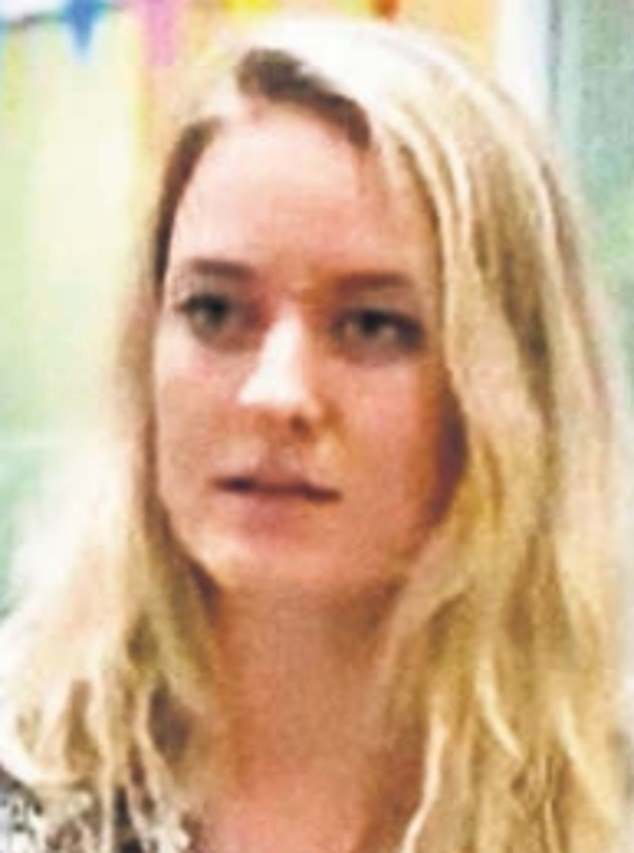 Lizzie Haughton grew up in novelist John Steinbeck’s old cottage in Bruton, Somerset, and is now one of Extinction Rebellion’s key organisers

She grew up in novelist John Steinbeck’s old cottage in Bruton, Somerset, and is now one of Extinction Rebellion’s key organisers.

Arrested at Knowsley, the 24-year-old Manchester University student is listed as a director of Climate Emergency Action, said to be the company that runs XR. In 2018, when Miss Haughton was an officer of Manchester students’ union, she was arrested in the city for highway obstruction at a climate protest.

She and nine others sat on a pedestrian crossing holding a banner which read: ‘We’re all f*****’. 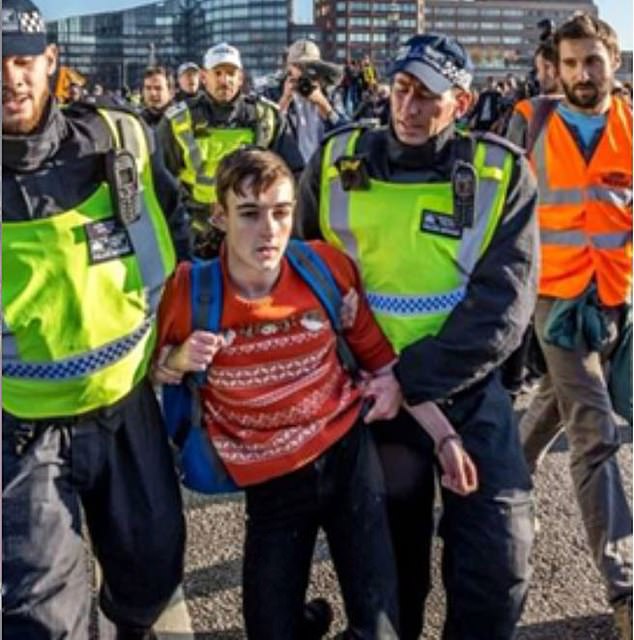 Being arrested for the first time in London in 2018 on what the climate group billed as Rebellion Day was ‘the single most rewarding and worthwhile experience of my life’, according to Mr Thelwell, 21.

Working as a gardener in between studying for a degree in politics and international relations at York University, Mr Thelwell – originally from the Wirral – was adopted as a Green Party candidate for May’s local elections, postponed by the pandemic. He was among those charged with aggravated trespass over the Knowsley blockade.

The illustrator, who attended Wymondham College in Norfolk where boarding fees are £11,500 a year, says she has devoted herself to ‘non-violent direct action’. Miss Ditton, 26 – who posted an online photo of herself topless in an allotment to highlight another environmental cause – was among those arrested at Broxbourne. 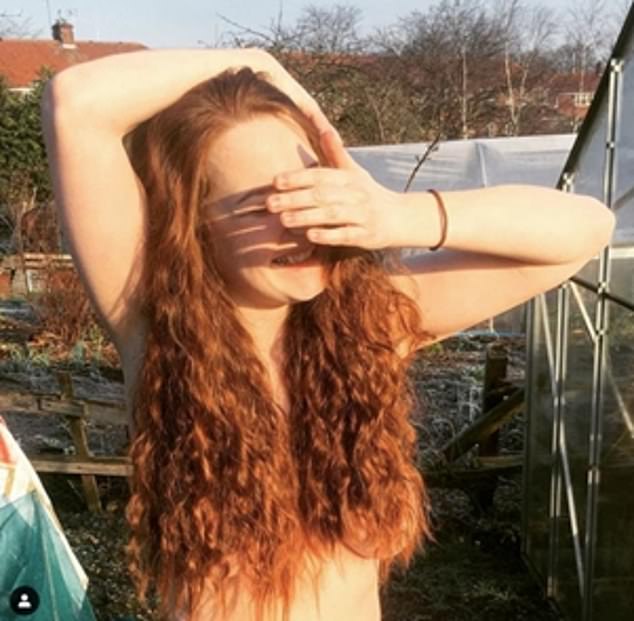 Illustrator Gabriella Ditton, who attended Wymondham College in Norfolk where boarding fees are £11,500 a year, says she has devoted herself to ‘non-violent direct action’

The registered childminder and mother of one, 55, of Bury St Edmunds, Suffolk, was pictured on an Extinction Rebellion rally in London with the group’s hourglass symbol on her forehead. She has been charged with obstruction of the highway in Broxbourne.

In 2008, Miss Bracht was photographed in Islamic dress when she fled her home in Sunderland with five daughters over fears they were about to be taken into care. They were found in Munich waiting to board a bus heading for Turkey.

Then in 2014 she was reported to have disappeared again to go to Syria, before being imprisoned and asking to come home in 2018. 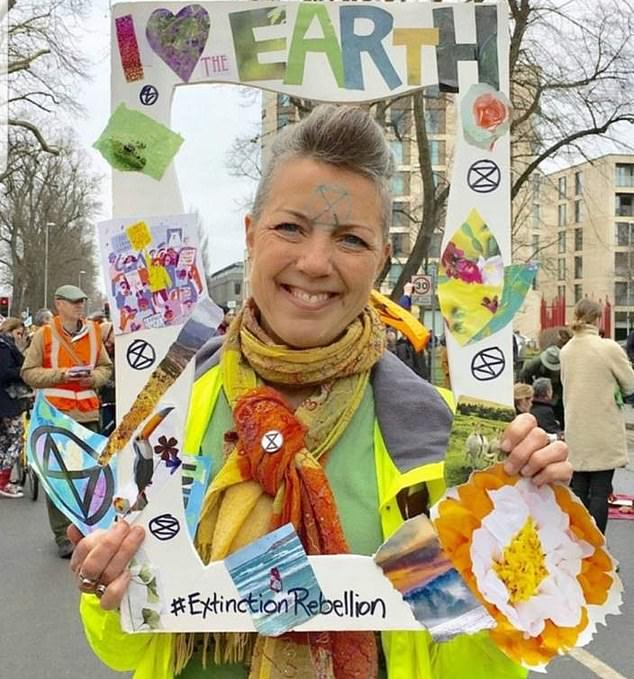 Hazel Stenson, 55, a registered childminder and mother of one, was pictured on an Extinction Rebellion rally in London with the group’s hourglass symbol on her forehead

Miss Bracht said she had never even met the IS fighter and had never been to Syria.

Speaking to the Mail after she was released on bail yesterday, she said: ‘The mainstream media have made me a terrorist. I never had anything to do with it.’

Miss Bracht has been charged with blocking the highway and obstructing a police officer at Broxbourne. She appeared at Luton Magistrates’ Court via video link, but refused to enter a plea or confirm her name and smiled for most of the hearing.

She only spoke to confirm her address, which she gave as a ‘squat’. District judge Sally Fudge recorded her silence as a not-guilty plea. Miss Bracht told the Mail she was not ‘connected’ to XR, but said: ‘It looks like the people in this country need help to get their free speech again.’

Brother and sister Joel and Miriam Instone were pictured enjoying a family holiday in Tuscany eight years ago, but today both are committed supporters of Extinction Rebellion.

At his parents’ home in Bury, Greater Manchester, Joel, 30, told the Mail yesterday: ‘This is about a system that exploits working class people in our country.’

He and his sister, 22, have been charged with aggravated trespass in Knowsley. 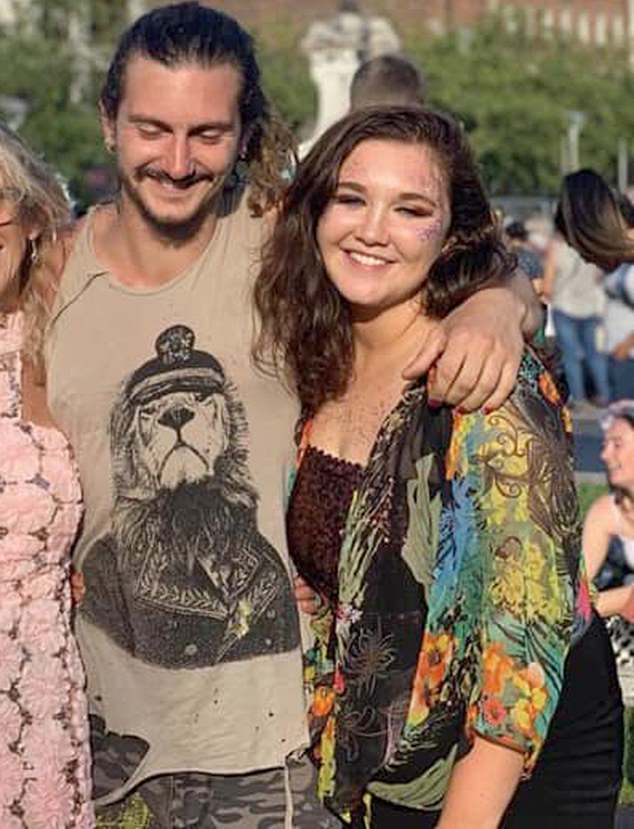 What irony! ‘Duped’ ex-pr quit… to fight for nuclear

By Guy Adams for the Daily Mail

One of the great ‘car-crash’ TV interviews of our age occurred in Andrew Neil’s BBC studio around lunchtime on October 9, last year. The victim was a 35-year-old mother of two from Exeter called Zion Lights.

She was appearing in her role as ‘chief spokesperson’ for Extinction Rebellion, whose supporters were at the time doing their best to bring central London to a grinding halt.

Wearing a chunky necklace and an expression that alternated between abject terror and bemusement, Miss Lights (whose first name is pronounced ‘Zee-on’) was asked to provide evidence to support the protest group’s headline claim that climate change will kill ‘billions of people… in the next ten to 20 years.’

After umming and ah-ing for a few seconds, it emerged that no such evidence exists. There is, she somewhat sheepishly confessed, no prospect of global warming contributing to the death of ‘billions’, or even millions, of people in that timescale. The group’s principal claim had, in other words, been made up.

Mr Neil then asked his guest how Extinction Rebellion proposed to achieve its main target: reducing Britain’s carbon emissions to ‘net zero’ by 2025.

On paper, he pointed out, such a dramatic shift would require drastic measures including the confiscation of petrol cars, state rationing of meat, the complete end of all aviation, and the abolition of every gas stove and heating system in every home in Britain. 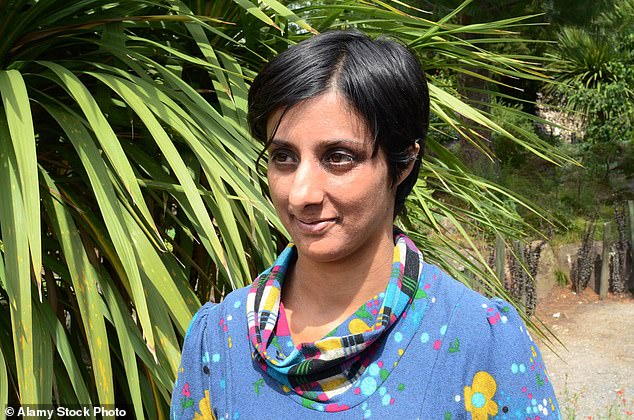 Mother-of-two Zion Lights, 35, from Exeter, was interviewed in role as ‘chief spokesperson’ for Extinction Rebellion in Andrew Neil’s BBC studio around lunchtime on October 9 last year

Miss Lights responded with a shrug. ‘I mean,’ she declared, ‘I’m not here to give you solutions!’ It was, at best, an odd position to take, given the highly disruptive protests her group was at that moment conducting.

And things continued in this bizarre vein for ten minutes. As one newspaper critic later wrote: ‘I have never seen such a laughable presentation by anybody. It would have been far more useful to have a defunct vacuum cleaner placed on the interviewee’s chair.’

Laughable is certainly one way to describe Extinction Rebellion, or at least their declaration that last weekend’s neo-fascist blockade of newspaper print works was part of a campaign to ‘free the truth’.

Where exactly, one might ask, was the group’s commitment to the ‘truth’ when, as Mr Neil so elegantly exposed, it was endlessly circulating the false claim that climate change will kill billions of people ‘in the next ten to 20 years’?

This flagrant hypocrisy – there really is no other way to describe it – is among the reasons why Zion Lights has, in the months since the interview aired, fallen quite spectacularly out of love with the lobby group she once spoke for, and is now working as a spin-doctor for the nuclear industry.

More on this later. In the meantime, it should be stressed that Miss Lights had originally been part of the small cohort of Extinction Rebellion activists who at least try quite hard to practise what they preach.

Unlike many of the middle-class trustafarians who attend its protests, while simultaneously indulging in exotic holidays, she and her charity worker husband Aaron Cleland have decided to forego all driving and flying, and follow a strict vegan diet.

In a 2015 book called The Ultimate Guide to Green Parenting, Miss Lights told how her daughters Arwyn and Raven (then aged four and two) wear second-hand clothes, play with ‘upcycled’ toys and books, and are required to wait for the paddling pool to fill with rain water before being allowed to splash around in it.

The book, among other things, advised parents to ‘take your placenta home and bury it in the garden, where it will decompose and provide nutrients for anything planted above it,’ carry children in slings (rather than using pushchairs) until they’re old enough to walk, and to ‘make your own cleaning products’ by using vinegar and baking soda.

Miss Lights, who is also a published poet, once told an interviewer how her girls eat (vegan) pancakes for breakfast, enjoy two hours of ‘wild time’ in nature every day and are educated at an outdoor ‘forest school’, as well as having ‘free play’ – unstructured playtime – at home.

‘They are permitted “junk” food in the form of chips made from organic potatoes,’ the interviewer noted, ‘and, occasionally, a low-sugar, vegan ice cream with real chocolate chunks.’

This – just a touch joyless – existence, once saw her dubbed ‘Britain’s greenest mother’ by the Telegraph.

It also contributed to her meteoric rise within Extinction Rebellion, where she arrived as a spokesperson last July, and within two months was appointed editor of the in-house newspaper called the Hourglass, which she claimed was designed ‘to appeal to more comfortable, middle-class people’.

Her Asian heritage was also welcome, since it contributed to the diversity of an organisation whose leading protagonists are, like so many bien pensant Left-wingers, almost entirely white.

Indeed, days after her pummelling at the hands of Andrew Neil, she was namechecked approvingly in a lengthy article in the Guardian – where else? – which asked: ‘Does Extinction Rebellion have a race problem?’

By then, however, Zion Lights was in the throes of a dramatic career volte face that would see her part company with the lobby group in spectacular fashion.

The BBC interview had made her realise that Extinction Rebellion was – and still is – unable to offer any workable solutions to climate change, beyond replacing Parliament with ‘citizens’ assemblies’, that will, somehow, come up with policies to stop all carbon emissions.

Yet an existing solution, she came to believe, is staring us in the face. It is nuclear power, which she describes as a ‘reliable, low-carbon energy source that we can invest in now’.

Many on the Left, where Miss Lights has spent most of her political life, have of course campaigned vigorously against the nuclear industry for decades.

But, shortly after her encounter with Andrew Neil, she met Michael Shellenberger, a US environmentalist who campaigns against so-called ‘alarmism’ and for workable solutions to the climate crisis, including the ramping up of nuclear power.

In June, at the height of lockdown, she revealed that she had taken a job running Shellenberger’s British campaign group Environmental Progress UK.

In this capacity, she is now a vigorous lobbyist for the nuclear industry, pushing, for example, for the creation of the mooted Sizewell C nuclear power station in Suffolk, which she says will produce 7 per cent of Britain’s electricity, and save nine million tonnes of carbon emissions per year.

‘For many years I was sceptical of nuclear power,’ Miss Lights announced. ‘Surrounded by anti-nuclear activists, I had allowed fear of radiation, nuclear waste and weapons of mass destruction to creep into my subconscious… I realised I had been duped into anti-science sentiment all this time.’

Since then, she’s ‘parted ways’ with her old friends and become Extinction Rebellion’s first double agent.

‘The facts didn’t really change, but once I understood them, I did change my mind,’ was how she put it.

Perhaps this weekend’s efforts to censor the news media represents the protest group’s way of making sure more of its free-thinking supporters don’t also change their mind.