A mother who dismissed a mark on her head as a ‘small scratch’ caused by a hairbrush is warning of the importance of sun protection after being diagnosed with skin cancer.

Rachel Collett, 48, of Bideford, Devon, first noticed the mark in 2014 but initially dismissed it as a harmless scratch or a beauty spot.

‘Eventually it gradually started puckering around it and what I describe as a volcanic crater started dipping into my head,’ she explained.

Rachel Collett, 48, of Bideford, Devon, first noticed a mark on her forehead (circled above) in 2014 but initially dismissed it as a harmless scratch or a beauty spot 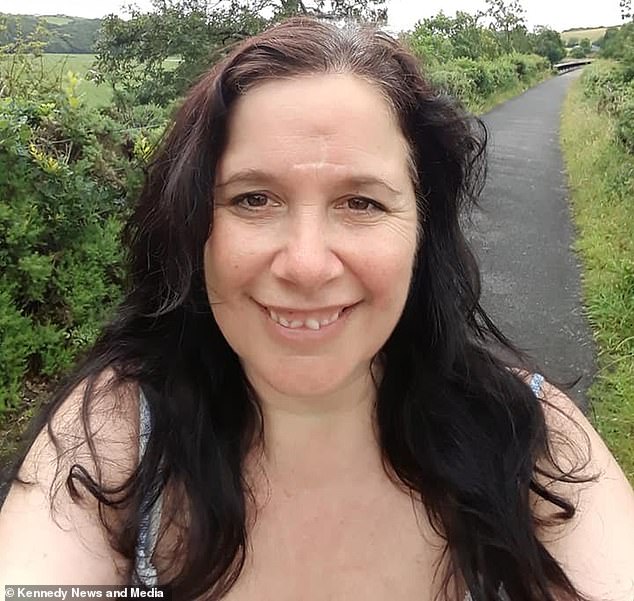 The mother-of-two, pictured with the scar on her forehead from the operation, is warning of the importance of sun protection following her diagnosis

‘But it kept getting bigger and then the red bit in the middle disappeared and it was just pearly white. So I went to the doctors who referred me to a dermatologist.’

A biopsy revealed it to be basal cell carcinoma, a form of skin cancer, so she had the lesion removed.

The mother-of-two, who works at a secondary school, had another lump near her eye removed in 2018, and a non-cancerous growth removed at the end of her nose this year.

Now she wants to raise awareness of the importance of sun protection, saying that she only started wearing low SPF sunscreen in her 20s. 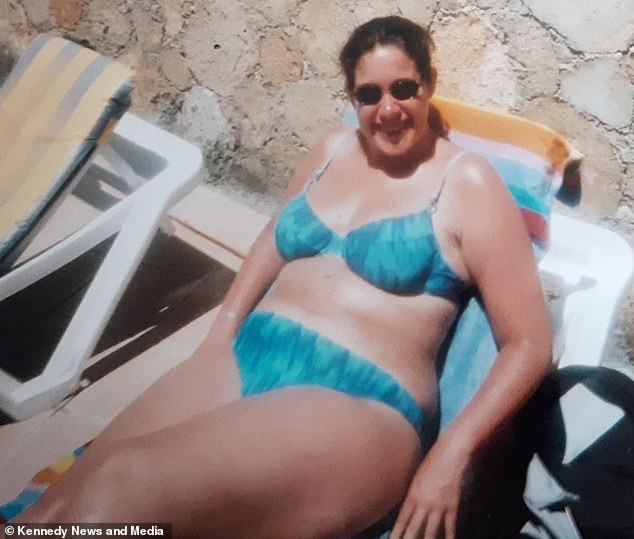 Rachel wants to raise awareness of the importance of sun protection, saying that she only started wearing low SPF sunscreen in her 20s. Pictured, on holiday in Greece in her 20s 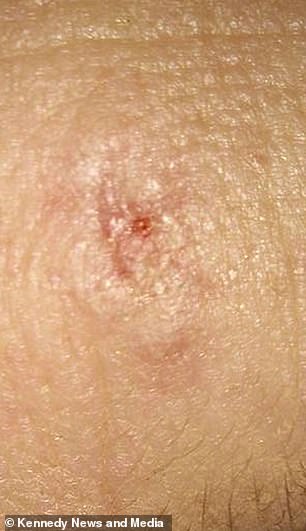 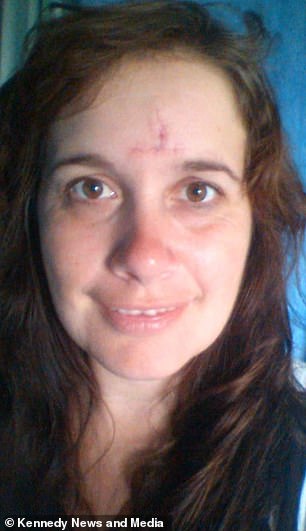 Rachel was initially not worried about the mark, pictured left, believing it was a harmless scratch or beauty spot. However she now has a scar (right) after having the mark removed 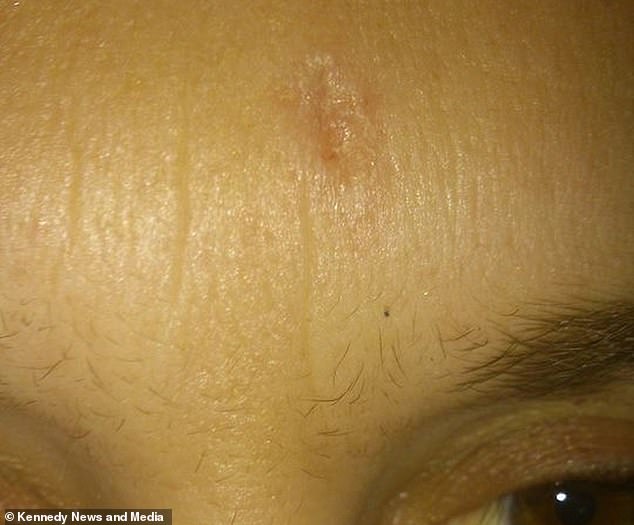 Rachel noticed something wasn’t right when the ‘scratch’ scabbed over then flaked off, leaving her with a ‘crater-like’ dip on her forehead, pictured

‘[The dermatologist] was 98 per cent sure when I got there that it was basal cell carcinoma and asked me questions like “did I go on sunbeds?” And I told her “no”.

‘She asked if I used sun cream and I didn’t in my youth because I was born in 1974 when skin cancer wasn’t known about.

‘And because I was olive skinned my mum would put coconut oil on me, rather than sun cream because she was unaware of the effects of skin cancer.’

Doctors said they normally see basal cell carcinoma in older people and it’s ‘very rare’ for someone her age to have it.

While having the procedure she mentioned a 2cm mark on the side of her face and was advised to monitor it. 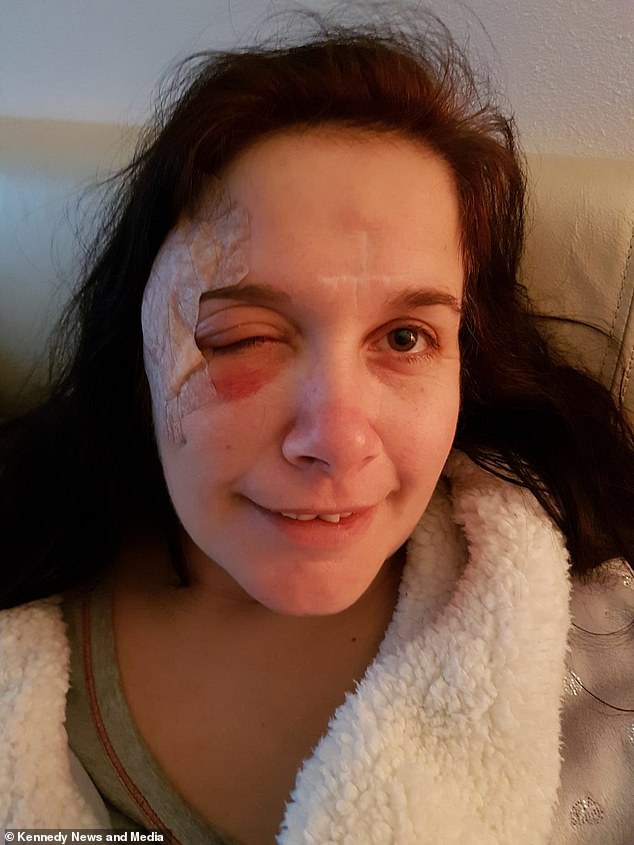 The mother-of-two, who works at a secondary school, had another lump near her eye removed in 2018, pictured following the operation 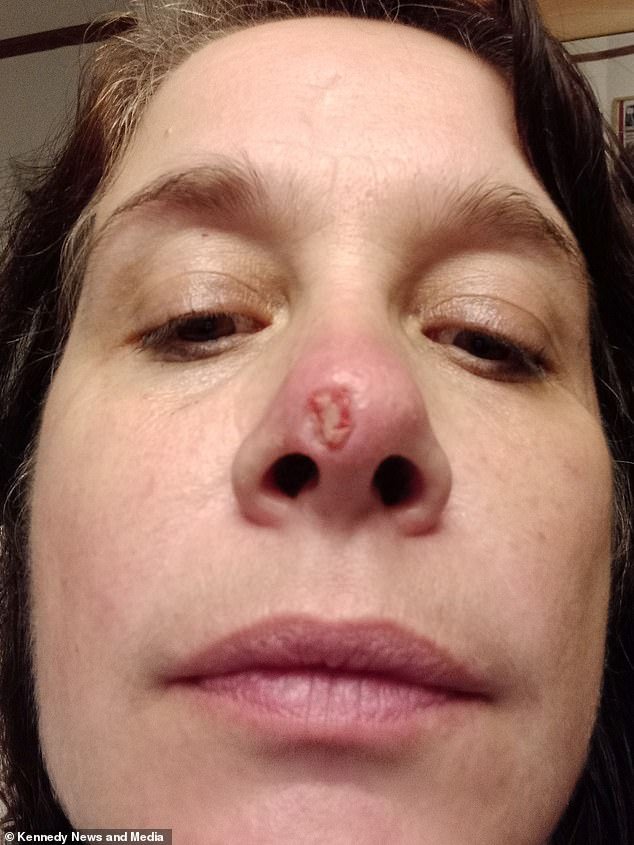 Rachel said: ‘They described [the procedure] as they cut my forehead across, down and across, opened it up like a window to remove the cancer and tissue around it to make sure they’ve got rid of the whole cancer.

‘They then put it back together and my scar ended up being like an anchor.

‘It [the diagnosis] was a bit worrying because I’d never heard of it before and obviously I’d heard of skin cancer and melanoma and how that spreads.

‘I was given a leaflet to read and told that it’s very rare that it spread to other organs, so I felt a bit relived about that.

‘When she said that I’d more than likely get more and I obviously have I just think “how many more am I going to get in my life time?” 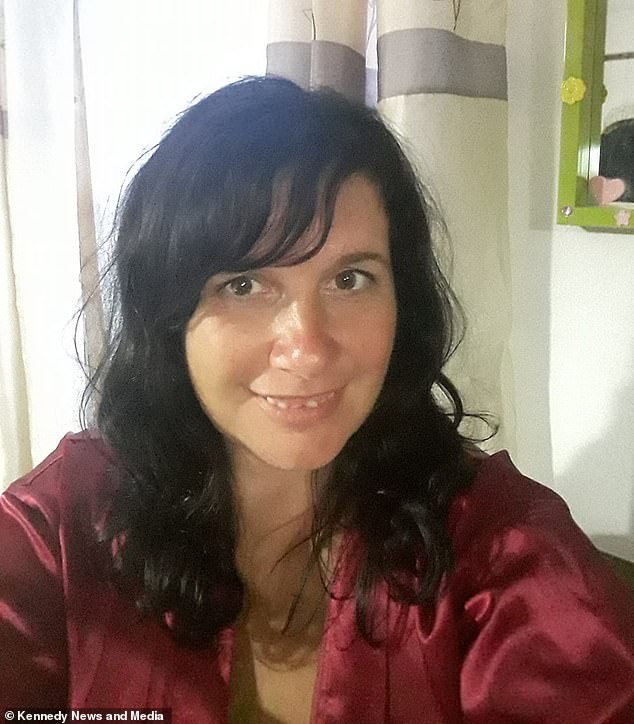 Rachel, pictured, is now passionate about raising awareness of skin cancer and slaps on factor 50 and regularly checks her body for any lumps and bumps

Rachel, pictured, said she worries about how many more cancerous growths she might have in her lifestime

‘It’s the scar that everyone notices. In the school that I work in all the young people say “what’s that scar on your head for, miss?”.

‘It’s affected my self-confidence. I see people stare which makes me feel uncomfortable.

What is basal cell carcinoma?

Skin cancer is one of the most common cancers in the world. Non-melanoma skin cancer refers to a group of cancers that slowly develop in the upper layers of the skin.

Basal cell carcinoma (BCC), also known as a rodent ulcer, starts in the cells lining the bottom of the epidermis and accounts for about 75 in every 100 skin cancers.

It usually appears as a small, shiny pink or pearly-white lump with a translucent or waxy appearance. It can also look like a red, scaly patch. There’s sometimes some brown or black pigment within the patch.

The lump slowly gets bigger and may become crusty, bleed or develop into a painless ulcer. Basal cell carcinoma does not usually spread to other parts of the body.

‘I have to remind myself that this is a warning to other people and try and tell myself it’s the story of my life.’

At the beginning of this year, she noticed a mark on the tip of her nose that was behaving similarly to one on her forehead, so Mohs surgery removed in the least invasive way possible.

But after the tissue was sent to a lab, it was discovered to be rosacea – a common skin condition that causes blushing or flushing and visible blood vessels in your face.

She’s now passionate about raising awareness of skin cancer and slaps on factor 50 and regularly checks her body for any lumps and bumps.

Rachel said: ‘Up until my 20s no one knew about skin cancer. In my 20s I went to the Greece islands quite a lot and was going on two holidays a year there.

‘I was putting on some factor 15 thinking that was enough to protect myself but that hardly protects you at all.

‘I’m constantly saying to my children, “make sure you have sun cream on”. During heatwaves I’ve been putting on factor 50 and stay in the shade, if I go down the beach I don’t stay there for long.

‘My message would be to always put on sun cream and protect yourself. It’s not putting it on once you’re out there, it’s putting it on before you go out because it takes time for your skin to absorb it.

‘Slip, Slop, Slap’ is the slogan the Australians use and we need to remember to slip on a t-shirt, slop on sun lotion and slap on a hat.’