The mother who sought assurances for her son with cystic fibrosis at yesterday’s Downing Street press conference has said Matt Hancock ‘evaded’ her question.

Sadie Stainfield, 35, from Northampton, was the first non-journalist in the country to ask a question to a minister via video at the daily coronavirus briefings.

The single parent, who works in a primary school, pressed the Health Secretary over the plans for vulnerable pupils once schools have reopened.

But she said Mr Hancock’s response did not clear up what the next steps were for her 10-year-old son Stanley who has autism and cystic fibrosis.

And the mother also revealed that this was not her first contact with the Health Secretary, as the pair had exchanged letters a few months ago.

Ms Stainfield had thanked Mr Hancock for fighting tooth and nail to secure funding for a cystic fibrosis drug, and received a ‘personal response’ from him.

She told MailOnline: ‘So as much as he evaded answering my questions today fully, I do have quite a lot of respect for that guy because he did actually do that for the CF population.’

Sadie Stainfield, 35, from Northampton, was the first non-journalist in the country to field a question to the Health Secretary over video-link at the daily briefings where she asked a question about her 10-year-old son Stanley, who has cystic fibrosis and autism (pictured together) 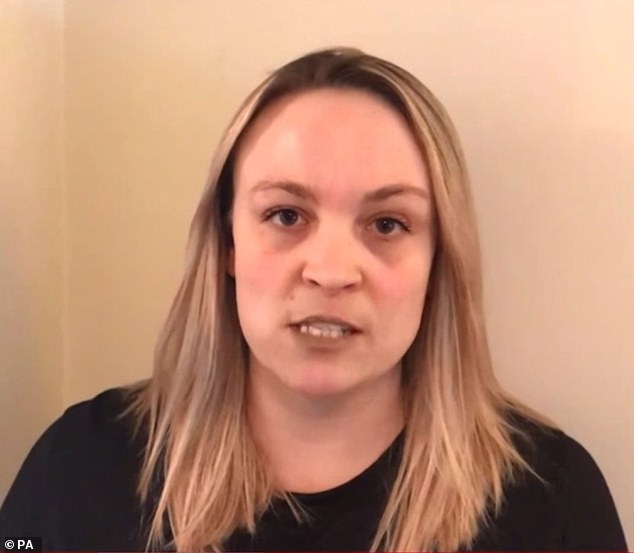 The single parent, who works in a primary school, pressed the minister for plans to send vulnerable pupils back to school before a vaccine has been developed

Ms Stainfield: My question is regarding my 10-year-old son, who has cystic fibrosis and autism.

‘Apart from shielding, is there any other option for him and others in the extremely vulnerable category to return to school and be part of society again without a vaccine available?’

Matt Hancock: ‘The answer to this is yes.

‘We have made sure in the schools policy that we’re working very hard to ensure that those who have extra needs, for instance, people with autism and cystic fibrosis, get that extra support.

‘It is of course very, very hard though when that clashes with the medical needs, which have to come first.

‘And for those who are in the shielded category, I’m afraid that the safest thing for them to do is to be shielded, which is not just to stay at home, but really be protected from all contact because of the consequences should they get the disease.’

Ms Stainfield was the third member of the public afforded a question in the Number 10 briefings, but the first who pre-recorded a message rather than sending it in writing.

After her video flashed up on the screen, Mr Hancock said: ‘We have made sure in the schools policy that we are working very hard to ensure that those who have extra, for instance people with autism and cystic fibrosis, get that extra support.

‘It is of course very, very hard though when that clashes with the medical needs which have to come first.

‘And for those who are in the shielded category, I’m afraid that the safest thing for them to do is to be shielded.’

Mulling over Mr Hancock’s response, she said: ‘I think as an answer you had to rewind it and digest it a little bit more… because the first part he said that for vulnerable children with autism, yes there will be support of course, but when it comes to a child who’s in a shielding category the medical needs will always take priority and he needs to remain shielded.’

She added: ‘I think what he was kind of saying indirectly was “he needs to be shielded until further notice” because cystic fibrosis there isn’t going to be support for that in school.’

Ms Stainfield also said it was not clear what criteria would need to be met to allow shielding groups to re-integrate into society.

The mother said: ‘What actually gives them (the government) the green light to put the shielding category back into society and have contact with people without a vaccine?’

Ministers are understood to be urgently sketching the first baby steps out of lockdown, but it is widely touted the most at-risk groups will be told to stay indoors for the foreseeable future. 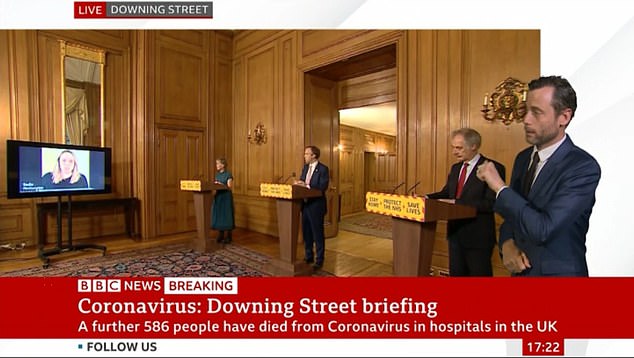 Ms Stainfield, an ex-Barclays bank manager, is terrified at the thought of Stanley going back to school and said it would be ‘completely irresponsible’ if the government let vulnerable children back into classrooms while there was no vaccine.

She said: ‘I’d be absolutely petrified because as a CF mum you fear the winter because that’s the worst period usually and if you get over it without IV, coughs, colds and antibiotics for six weeks you’ve had a good winter.

‘So that’s for bugs that are obviously grown on swabs and they have antibiotics that can defeat it.

‘This one is undefeatable so for me as a parent for my son who has cystic fibrosis that is a choice I shouldn’t have to make.’

However, Ms Stainfield did empathise with the politicians steering the UK through uncharted waters in this crisis.

She said: ‘It’s an impossible situation. I do feel for them obviously in a way. Obviously politicians, they can be very evasive and they can lie and all sorts, thank god we haven’t got Donald Trump as our President.’

And she even reserved special praise for Mr Hancock, who she claimed had pushed to secure funding for drugs used to treat cystic fibrosis patients.

Ms Stainfield told MailOnline: ‘I will give Matt Hancock his dues. I wrote to him only a few months ago as he is the MP who actually pressed NICE to prescribe orkambi for CF patients.

‘Matt Hancock didn’t give in and the NHS and NICE came to an agreement… Matt Hancock was actually the person who got that through as that’d been going on for years and years.’ 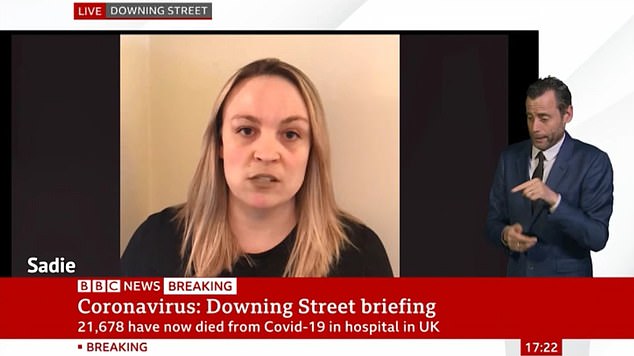 However, Ms Stainfield did empathise with the politicians steering the UK through uncharted waters in this crisis

Yet she did say she was ‘angry with Boris’ in the early stages of the pandemic and was appalled he continued to happily shake people’s hands.

The mother, who ‘couldn’t believe’ she’d been selected to ask a question, paid tribute to her ‘wonderful’ son Stanley.

She said: ‘My son, he’s a wonderful character. The worst thing that happened in the first week (of lockdown) was when I had to say to him we’ll have to stay at home for the first couple of months.

‘He said “oh does that mean I can’t go to Thorpe Park?”. He is absolutely obsessed with roller-coasters.

‘And in his last CF clinic he just got measured at 1.4 metres so he’s just big enough to go on rides… He was devastated.’

The daily 5pm press conferences have become a staple of the coronavirus crisis, with reporters grilling ministers over issues such as personal protective equipment shortages.

The selected questioner from the public will be informed by 3pm, two hours ahead of the usual press conference time.

They will then be given the choice of either filming themselves asking the question, with the footage played during the press conference, or having their question read out.

Anyone over 18 can use an online form to submit their question for consideration.

Today, two questions were selected, the other being from Amanda in Hull who asked about childcare for parents going back to work if schools were not open.