A mother was branded ‘lazy’ by other parents after she confessed she hasn’t been home schooling her son during lockdown.

Writing anonymously on British parenting site Mumsnet, the mother explained that her son, who is in Year 5, doesn’t see the point in doing the work because it is not being checked by his teacher – and admitted she ‘can’t be a***d’ to chase him.

She explained that instead he has been spending his time playing computer games, gardening and helping her cook, which supporters agreed were ‘invaluable’ life skills that he otherwise wouldn’t have time to learn.

While dozens of other parents admitted to being similarly relaxed when it came to keeping up with work set by teachers, critics claimed it was ‘lazy’ and ‘irresponsible’. 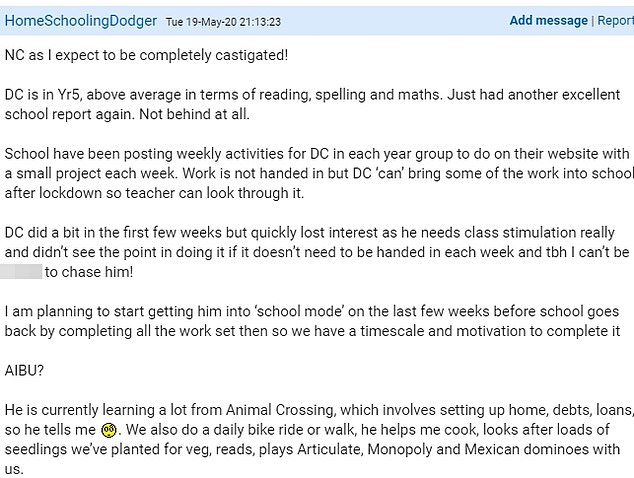 The anonymous mother explained that her son has been playing games, reading and helping with chores during lockdown

The mother said she hopes to encourage her son to complete all the work that he’s missed in the last few weeks before schools across the UK reopen next month.

Asking the forum for their views, she wrote: ‘DC [dearest child] is in Yr5, above average in terms of reading, spelling and maths. Just had another excellent school report again. Not behind at all.

‘School have been posting weekly activities for DC in each year group to do on their website with a small project each week. Work is not handed in but DC ‘can’ bring some of the work into school after lockdown so teacher can look through it.

‘DC did a bit in the first few weeks but quickly lost interest as he needs class stimulation really and didn’t see the point in doing it if it doesn’t need to be handed in each week and tbh I can’t be a**** to chase him!’

When are schools in the UK reopening?

A growing number of councils across the UK have voiced concerns about children going back to school on June 1.  Many Labour-run authorities have ruled out following the government’s stated reopening date, including Bury, Slough and Liverpool. Schools that are set to reopen may stagger lunchtimes, halve class sizes and practice strict social distancing.

A stream of responses confessed they haven’t been forcing their children to spend time doing school work and urged the mother not to worry.

One person said: ‘I haven’t done anything either. Single mum, working full time and been ill – so not a great combination. Have had to leave DD to it. Swing between not worrying about it and feeling sick with guilt.

‘We just have to get through this and trust that the teachers will get them back on track when schools reopen.’

Another wrote: ‘I am a primary school teacher and my dd does the bare minimum. I know she’ll be fine. It sounds like you are doing things that are good, like cooking, family games and cycling.

‘Do what you can and don’t take to heart what others are saying. You know your child better than anyone. If he’s bright he’ll be absolutely find and probably be ready to jump back into school when they open again. Mental health, is much more important at this time moment in time.’

Others argued that the mother has a bad attitude and it could impact how her son views the importance of education.

‘What a shame that the teacher is putting all that effort in and you can’t be a*****. Sorry to say it, but this pretty poor.

‘Do what you like but accept that: He may fall behind and not be in the same place when he goes back. Important new pieces of learning may be missed. He may develop a s***** attitude as he is being taught that if you can’t be bothered, there’s no point in doing it,’ wrote one.

Another said: ‘You’ve got to keep it going because if you think about the brain drain issues that teachers complain about every September, imagine after six months?

‘Then imagine that most kids have kept going? You’d be doing him a massive disservice tbh’

A third added: ‘I could understand if you were too busy, but you just can’t be a****. At least you’re owning your laziness I suppose! I think you should get to do something or he’s going to really struggle going back.’ 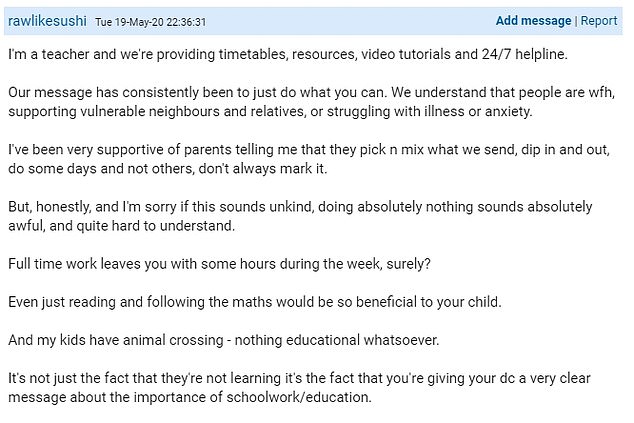