A woman has sparked a debate online after claiming she finds her friendships ‘stressful’ and admitting she’d sometimes rather be alone.

The mother, from the UK, took to parenting forum Mumsnet to ask other people if they found it difficult to maintain friendships

Many agreed with the mum saying friends mean unwanted ‘drama’ and that the effort of maintaining lots of close relationships can be exhausting – while others suggested the anonymous poster should find some new friends.

The original person sparked the conversation by writing: ‘Does anyone else find having friends is stressful, so don’t bother too much?

She added: ‘At times its like trying to maintain a relationship and you’ve always got to try and work out what the other is doing or thinking?’

Many people agreed with the poster with some saying it’s not the people themselves who cause stress – rather, the ‘expectation’.

‘I agree. It’s not that the friends themselves stress me out, it’s just the state of having friends. It’s just more relationships you have to look after and make time for,’ one person wrote.

‘I already struggle with the expectation that I should keep in contact with my close family, let alone friends as well. I also often find the while ‘having a boyfriend’ thing to be stressful because it’s about having to give attention to them. 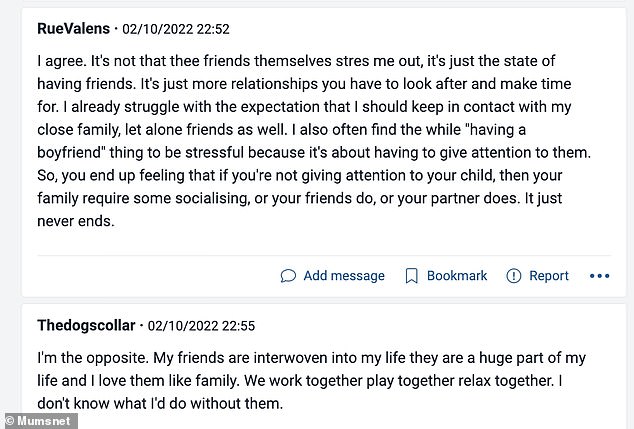 ‘So, you end up feeling that if you’re not giving attention to your child, then your family require some socialising, or your friends do, or your partner does. It just never ends.’

Another agreed saying: ‘OMG yes. I struggle to fit in time for DH, DC, family, me-time, work, hobbies and friends. I have several different groups of friends.

‘If I go out with friends on either a Friday or Saturday night, then I like one of these nights to be at home.’ She added this meant she often only saw one group of friends per weekend. 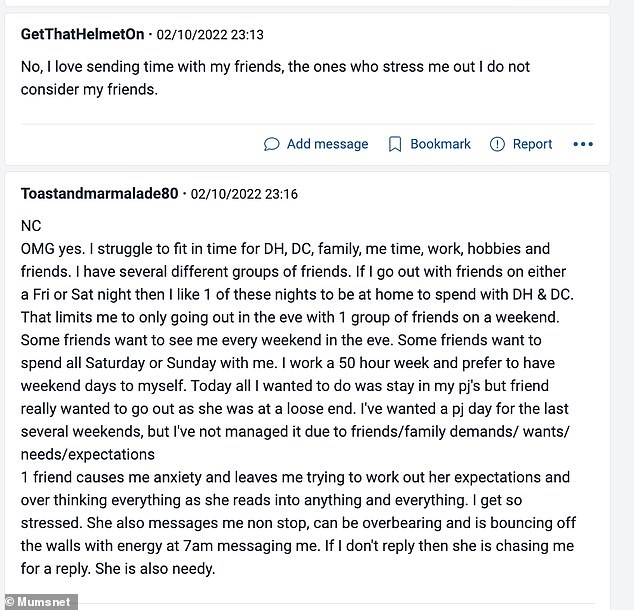 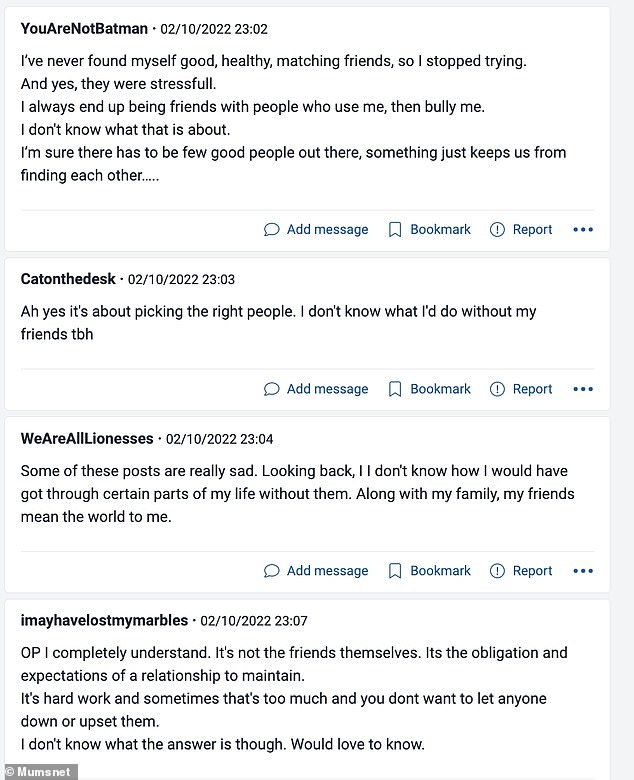 She continued: ‘Today all I wanted to do was stay in my [pyjamas] but friend really wanted to go out as she was at a loose end. I’ve wanted a [pyjama] day for the last several weekends, but I’ve not managed it due to friends/family demands/wants/ needs/expectations.

‘One friend causes me anxiety and leaves me trying to work out her expectations and over thinking everything as she reads into anything and everything.

‘I get so stressed. She also messages me non-stop, can be overbearing and is bouncing off the walls with energy at 7am messaging me. If I don’t reply then she is chasing me for a reply. She is also needy.’

However, many people disagreed, arguing that maybe the woman had just found the wrong friends for herself. 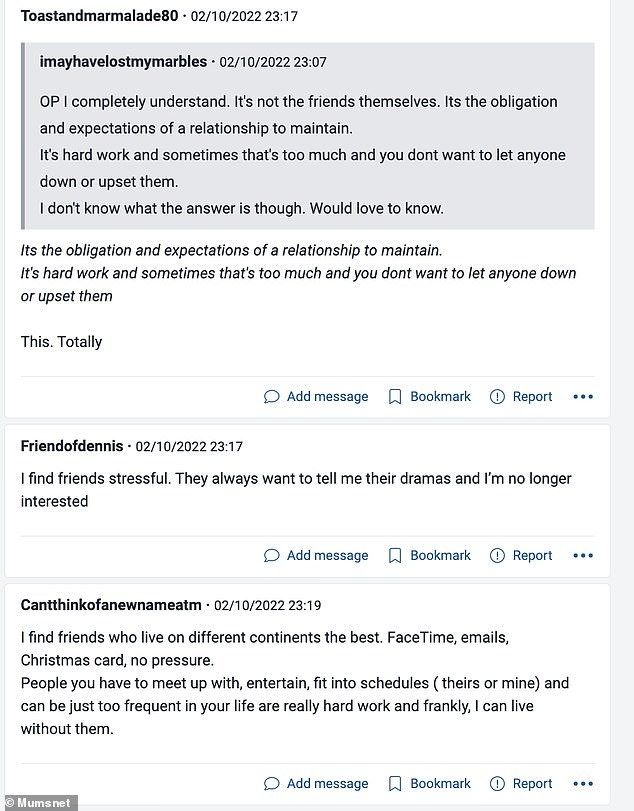 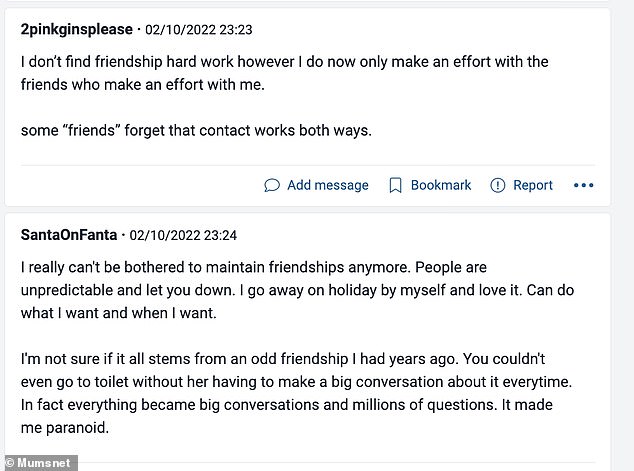 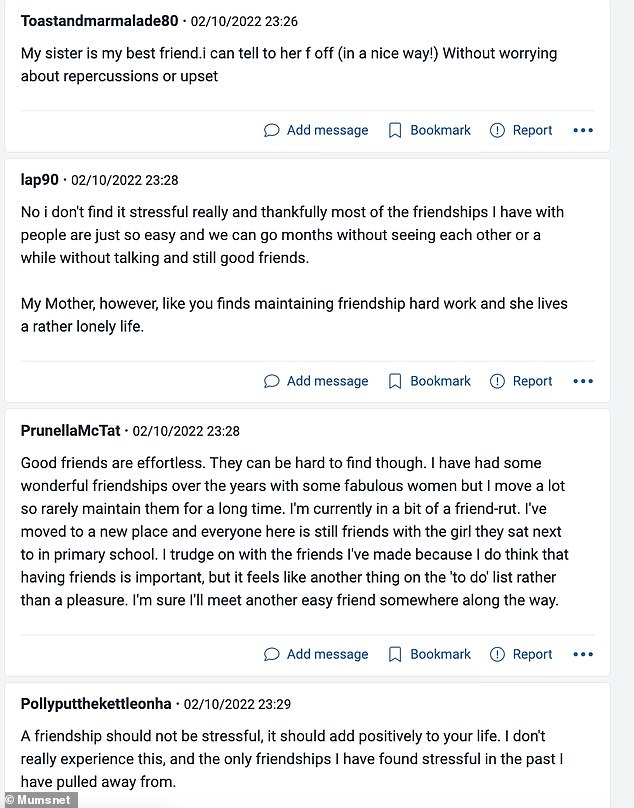 Another suggested that friendships shouldn’t be stressful, while another said ‘good friends are effortless’

Someone wrote: ‘I’m the opposite. My friends are interwoven into my life they are a huge part of my life and I love them like family. We work together play together relax together. I don’t know what I’d do without them.’

Another person replied saying: ‘If your friends stress you out, I would think about how to make some new ones. A lack of social contact is bad for most people’s mental health, and it’s associated with dementia and shorter life spans.’

Someone else wrote: ‘Good friends don’t stress you out. I wouldn’t say any of my friends ever do. Get better friends.’

While another said: ‘I completely understand. It’s not the friends themselves. Its the obligation and expectations of a relationship to maintain.

‘It’s hard work and sometimes that’s too much and you don’t want to let anyone down or upset them. I don’t know what the answer is though. Would love to know.’