EXPRESS INFORMER > News & Politics > Mother reveals how she screamed ‘Is she dead?’ when she found her daughter’s lifeless body

The devastated mother of a 17-year-old schoolgirl who was killed in a head-on car crash told of the horror of discovering her daughter’s lifeless body in the mangled wreckage.

Olivia Alkir died instantly when the Ford Fiesta she was a passenger in crashed head-on into an oncoming Mercedes at 80mph at Efenechtyd, near Ruthin, in June 2019.

Her mother Jo Alkir – who rushed to the scene of the crash after getting a call from a neighbour – screamed ‘is she dead?’ and pleaded ‘I’m not living without you’ as paramedics frantically pumped her only-child’s chest.

Edward Ryan Bell – the then-17-year-old driver of the Fiesta – ignored Olivia Alkir’s screams to slow down as he raced on the wrong side of the road against Thomas Henry Quick, 18, in a Ford KA.

Earlier this year, both boy racers were jailed for five years for causing death and serious injury by dangerous driving.

Mrs Alkir described driving to the scene of the crash on the B5105 as ‘entering hell’.

She saw mangled cars, police officers, a boy covered in blood and, in the midst of it all, emergency workers desperately pumping Olivia’s chest as she lay lifeless on the ground.

Mrs Akir said: ‘I was screaming, “Is she dead? Is she dead?”. I was shouting at her, begging her to live.

‘I was telling her all the good things we had planned, going to Morfa Nefyn, and to Turkey.

‘I was using all the emotional blackmail I could to get her to respond. I told her, “I’m not living without you.”

Olivia’s dad Mesut said he knew as he drove into the village that his daughter had died. He describes a strange feeling washing over him as he made his way to the scene.

‘In my head,’ he said, ‘I was planning a funeral. I felt like I was two people – one like a robot doing the job, and the other like a father, sad, behind me.

‘It was a strange feeling, the aura… that I knew she’d passed away. When I saw her, she didn’t have a single scratch on her body or face. She looked pure, like an angel.’

It was when police officers asked everyone to move back that Mrs Akir realised her daughter was gone.

‘You see it in films don’t you?’ she said. ‘The doctor came over and said, “We did everything we could.”

‘We fastened her into the ambulance, kissed her goodbye and Mesut went with her to the hospital. I couldn’t breathe.’

Olivia died instantly when the Ford Fiesta she was a passenger in crashed head-on into an oncoming Mercedes at 80mph at Efenechtyd, near Ruthin, in June 2019

Mrs Akir said she would often tell her daughter that ‘boys kill girls in cars every year,’ and ‘not to be one of them’.

She had even embarrassed Olivia by demanding to see how her male friends drove before allowing them to pick her up. 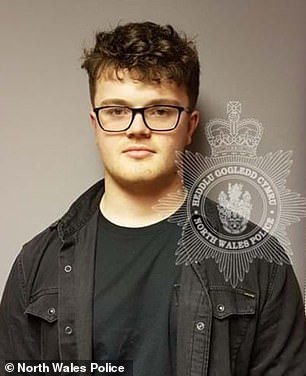 Edward Ryan Bell, – the then-17-year-old driver of the Fiesta – ignored Olivia Alkir’s screams to slow down as he raced on the wrong side of the road against Thomas Henry Quick, 18, (pictured) in a Ford KA

‘On that day, we didn’t know where Olivia was going,’ Mrs Akir said. ‘She told me she was going for a walk.

‘If I’d had a phone call to say, “Mum, we’re all going to go to Llyn Brenig to swim in the reservoir,” that would’ve been the first “no”.

‘Then the thought of her going up that road with a boy who’d just passed his driving test, that would’ve been another “no”.

‘But it was the start of their summer, it was a lovely day and they were ready to live their lives and enjoy themselves.

‘They had made plans in good faith, and were trusting in their friends’ sense of honour and responsibility.’

Bell was due to have a speed-restricting black box fitted in his Fiesta the day after the crash.

At the end of the boys’ hearing in March, a harrowing statement from Mr and Mrs Akir was read out, in which they described how their lives had been torn apart.

Only their own early deaths could be offer any relief from the pain of losing their beautiful, promising daughter.

The weekend had been set to be filled with fun, with Mrs Akir and Olivia looking forward to the trip to Morfa Nefyn.

Instead, Mrs Akir and her Turkish husband found themselves preparing for their daughter’s funeral.

They had Olivia’s body cleaned in a Muslim ceremony, before she was delicately wrapped in a shroud ready to be buried.

‘I said goodbye to her then, and when I came home, I felt at ease,’ said Mrs Akir. ‘For some reason, I felt this absolute calm. It was a beautiful ceremony. Having friends with me in the next room gave me great comfort.

‘We had the strength from the whole community.’

Mr Akir said he doesn’t know how he and his wife found the strength to go on. ‘When people lose a child, they go crazy, suicidal, or they do stupid things,’ he said.

‘How we didn’t do it, I sometimes question myself, but I believe it was protection from Olivia or God or Allah.’

Olivia’s coffin was carried from her home to the church by her friends.

A memorial bench has since been placed at her graveside with a plaque that reads ‘Beloved Child of Our Village.’

‘So much good has come from the community with this tragedy,’ said Mrs Akir. 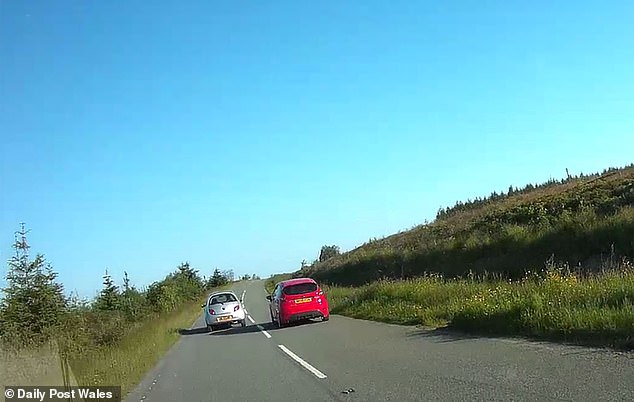 Harrowing footage shows two boy racers speeding around the roads of north Wales, hours before they would cause the fatal crash

‘It has helped us through the first year but it’s the rest of our lives now that we’ve got to slowly adjust to.

‘Everyone’s lives will move on and ours won’t.’

This weekend, as the couple, from Efenectyd, near Ruthin, prepare to put Olivia’s headstone on her grave, Mrs Akir said it is her wish that families will have the conversations that could spare others from suffering the same unimaginable grief they have had to endure.

‘As a tribute to Olivia, I want people to use the day to have a conversation – parent to child or even child to child. If you’ve got a friend who drives badly, please talk to them, because we’ve all got time on our hands at the moment.

‘Some parents seem to think getting the best or fastest car for their child is the right thing to do when it’s not. It’s feeding their ego.

‘You cannot change the red mist that comes over when a boy gets behind the wheel of a car, so you have to take away the risk and opportunity by having a black box and only allowing them to carry one passenger for the first year.

‘Other countries have this in place. Driving is a skill that requires focus and respect.’

‘If one conversation can save a life then we’ve done a good job and we will work with the police soon to keep spreading our message – that this beautiful, intelligent wonderful girl that could have gone far was an innocent victim in a race between two egos.

‘They’ve ruined their own lives as well.’

Mrs Akir said she and her husband are just ‘shells’ now.

‘We’ve got to exist on this planet for as long as mother nature wants us to, but it’s waking up every morning, knowing what we had and what we lost that day.

‘We had the most amazing child. It’s not just us that feel that way as parents. It’s what the community tell us, it’s what school have told us, the village, everybody.

‘People have told us how Olivia inspired them and their children and this makes us very proud.

‘She’d start revising so early, we’d have to tell her to stop, to go for a swim or a walk and take a break. It was hard to get her away from the books.

‘On the day we took her to look around Leeds University, we had to drop her off at Denbigh Leisure Centre at 5am first because she had lifeguard training.

‘We picked her up about 7am and by the time we got to Leeds, she had done full make up and hair – she just looked amazing how she changed in the car from this wet soggy look to this absolute beauty.

‘The other kids were there with their rucksacks and glasses looking all nerdy and there was Olivia like something out of Legally Blonde – but there was so much more to her than that.’

As Mrs Akir gets set to return to her job at Denbighshire council, she said she already dreading the reality of Olivia not sending her messages throughout the day.

‘It’s about going back to normal and I don’t want normal because it no longer exists for us.’

Mr Akir said returning to work at Wholebake in Corwen was a struggle for him.

‘I can’t find the strength or spirit to work because I don’t have a reason any more. Before I was working hard and doing overtime for Olivia’s future. Now it doesn’t make sense.

‘It’s hard, but work help me so much. The staff and management have been very supportive.’ 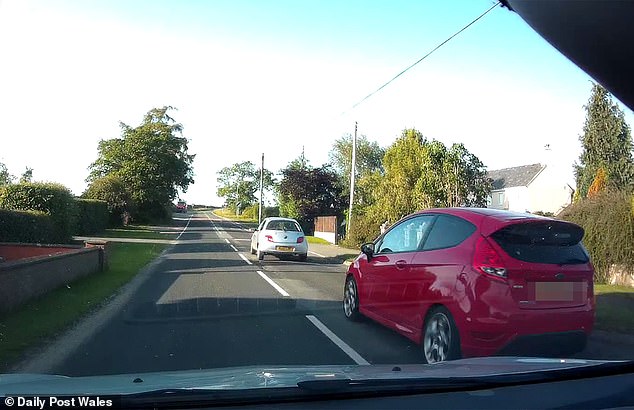 The boys can be seen using the roads as a racetrack in their respective Ford KA and Ford Fiesta, as a driver behind them comments ‘they are going to die’

A deputy head girl at Ysgol Brynhyfryd, she was saving towards university and had even set up a pension.

Mrs Akir said: ‘I trusted Olivia, she never gave me any reason not to. Never have I had to worry.

‘It’s lovely looking through these pictures and messages. She was lucky to have such lovely friends who talk about her all the time.

‘We keep in touch because we’re in it together – we need them as much as they need us.

‘Although I admit to them that sometimes it’s hard watching them grow and move on with their lives but I tell them I don’t want to lose them.’

Mr and Mrs Akir haven’t changed Olivia’s bedroom, and have yet to cancel her passport and Turkish ID card because doing so would feel like they are ‘deleting her.’

For now, the couple must hold on dearly to the belief that one day, they and their daughter will be reuinted.

‘We all believe we’ll see her again,’ she said. ‘We think the love was too strong for it to go.’