An 11-year-old girl who was asked to dance by a boy she didn’t like at her middle school’s Valentine’s Day ball turned him down – only to be told by the principal that she could not say no to him.

Azlyn Hobson, a student at the Rich Middle School in Laketown, Utah, came home angry after the principal, Kip Motta, told her that saying no was against the rules.

According to her mother, Azlyn was so excited for the dance that she put on a red-and-pink floral sundress over a long-sleeve T-shirt and leggings.

She also carefully arranged her hair because she was anticipating dancing with a boy she liked.

‘She was so excited in the morning when she left,’ Alicia Hobson told The Washington Post.

Alicia Hobson (pictured) of Rich County, Utah, was outraged after her 11-year-old daughter, Azlyn, was told by her middle school principal that she could not reject a boy’s invitation to dance at a Valentine’s Day event 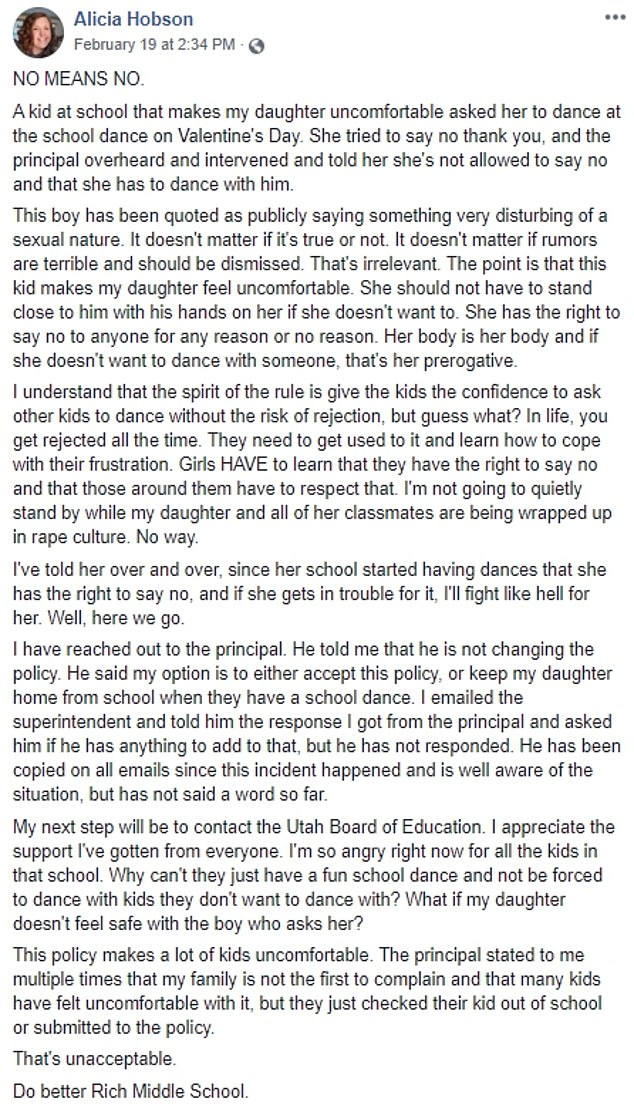 ‘I asked if she got to dance with the boy she liked, and she did and she was happy.

‘But in the same breath she was exasperated because she had to dance with the boy she hates.’

Alicia Hobson posted a lengthy statement on Facebook about the incident.

‘A kid at school that makes my daughter uncomfortable asked her to dance at the school dance on Valentine’s Day,’ she wrote.

‘She tried to say no thank you, and the principal overheard and intervened and told her she’s not allowed to say no and that she has to dance with him.’

Azlyn told her mother that the dance with the boy was painfully awkward. 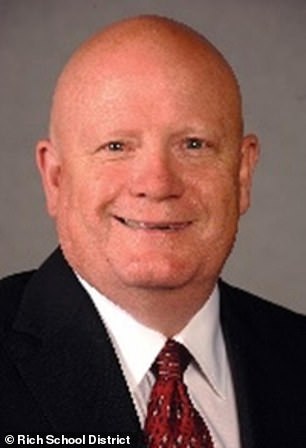 Kip Motta (above), the school principal, defended the policy, saying it was used so that kids would not feel left out

‘[The principal] was like, “You guys go dance. There’s no saying no in here”,’ Azlyn recalls Motta saying.

‘I just didn’t like it at all,’ Azlyn told the Salt Lake Tribune.

On February 19, Alicia Hobson wrote on her Facebook page that the boy has been known to make inappropriate comments in the past.

‘This boy has been quoted as publicly saying something very disturbing of a sexual nature,’ she wrote.

‘It doesn’t matter if it’s true or not.

‘It doesn’t matter if rumors are terrible and should be dismissed. That’s irrelevant.

‘The point is that this kid makes my daughter feel uncomfortable. She should not have to stand close to him with his hands on her if she doesn’t want to.

‘She has the right to say no to anyone for any reason or no reason.

‘Her body is her body and if she doesn’t want to dance with someone, that’s her prerogative.

‘I understand that the spirit of the rule is give the kids the confidence to ask other kids to dance without the risk of rejection, but guess what?

‘In life, you get rejected all the time. They need to get used to it and learn how to cope with their frustration.

‘Girls HAVE to learn that they have the right to say no and that those around them have to respect that.

‘I’m not going to quietly stand by while my daughter and all of her classmates are being wrapped up in rape culture.

Hobson wrote that she contacted the principal, Motta, demanding that the policy be changed. He refused, she claims.

‘I’ve told her over and over, since her school started having dances that she has the right to say no, and if she gets in trouble for it, I’ll fight like hell for her.

She continued: ‘I have reached out to the principal. He told me that he is not changing the policy.

‘He said my option is to either accept this policy, or keep my daughter home from school when they have a school dance.

‘I emailed the superintendent and told him the response I got from the principal and asked him if he has anything to add to that, but he has not responded.

‘He has been copied on all emails since this incident happened and is well aware of the situation, but has not said a word so far.

Motta and school officials say they are reviewing the policy. The above image is a stock photo of Rich Middle School

‘My next step will be to contact the Utah Board of Education. I appreciate the support I’ve gotten from everyone.

‘I’m so angry right now for all the kids in that school. Why can’t they just have a fun school dance and not be forced to dance with kids they don’t want to dance with?

‘What if my daughter doesn’t feel safe with the boy who asks her?

‘The principal stated to me multiple times that my family is not the first to complain and that many kids have felt uncomfortable with it, but they just checked their kid out of school or submitted to the policy.

Motta told the Salt Lake Tribune that students who have concerns about dancing with certain classmates should raise the issue with him beforehand so that he could intervene.

‘We want to protect every child’s right to be safe and comfortable at school,’ Motta said.

‘We also believe that all children should be included in activities.

‘The reason for the policy as we have had it (in the) past is to make sure no kids feel like they get left out.’

The principal denied that students were forced to dance with partners they didn’t want.

‘All they had to do was communicate with me. That’s what we tell the kids all the time.’

Motta told the Tribune that he and the school superintendent were reviewing the policy this week.

He said that the school hosts three dances a year as part of the physical education curriculum.

Motta acknowledged that students are asked to agree to dance with whoever asks them to.

‘They ask each other to dance and we ask them to say “yes” and the reason behind this policy or philosophy is to ensure that no kid is, no children at all are feel like they are left out,’ he said.

In 2018, the Weber School District in Utah ordered its school to do away with the policy requiring students to accept dance partners after a parent complained that her daughter was told she could not decline a boy’s invitation.

In one school in Ogden, a list of dance partners was created before the dance began. Students were then told they could only dance with a classmate once and that they could not turn down a request for a dance.

Similar policies exist at other schools and church dances throughout Utah.