A mother-of-two has used her baby to create hilarious elf on the shelf scenes to entertain her eldest son.

Heather Sargent Kroontje, 34, from South Dakota, decided to get creative with the popular elf on the shelf craze this year, substituting the elf for her ten-month-old baby, Frankie, in the mischievous scenes.

From hanging from a light shade to creating a mess in the kitchen and sitting in a pot, Frankie can be seen strategically posed to get the best shot.

Heather, who is a photographer, said: ‘After being in quarantine for what feels like most of this year, I had a lot of time to think and get creative, so I decided it would be a fun idea to create Elf on the Shelf scenes with my baby, Frankie.

Mother-of-two Heather Sargent Kroontje, 34, from South Dakota, decided to get creative with the popular elf on the shelf craze this year and took pictures of her ten-month-old son Frankie to cheer up her eldest son Charlie, nine 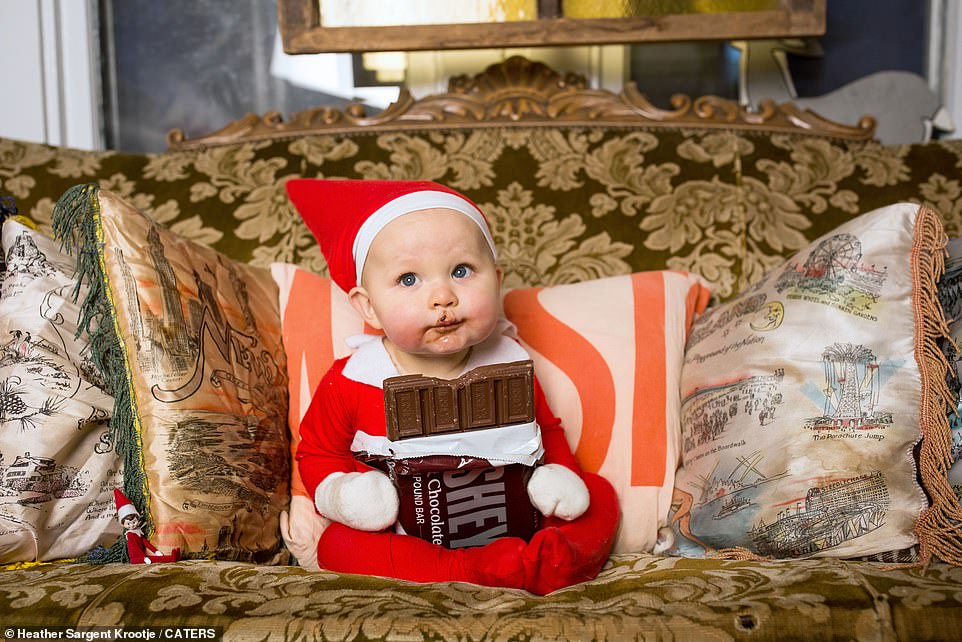 Heather took adorable – and hilarious – pictures of Frankie around the house, behaving like a naughty little elf, and munching on chocolate bars (pictured) 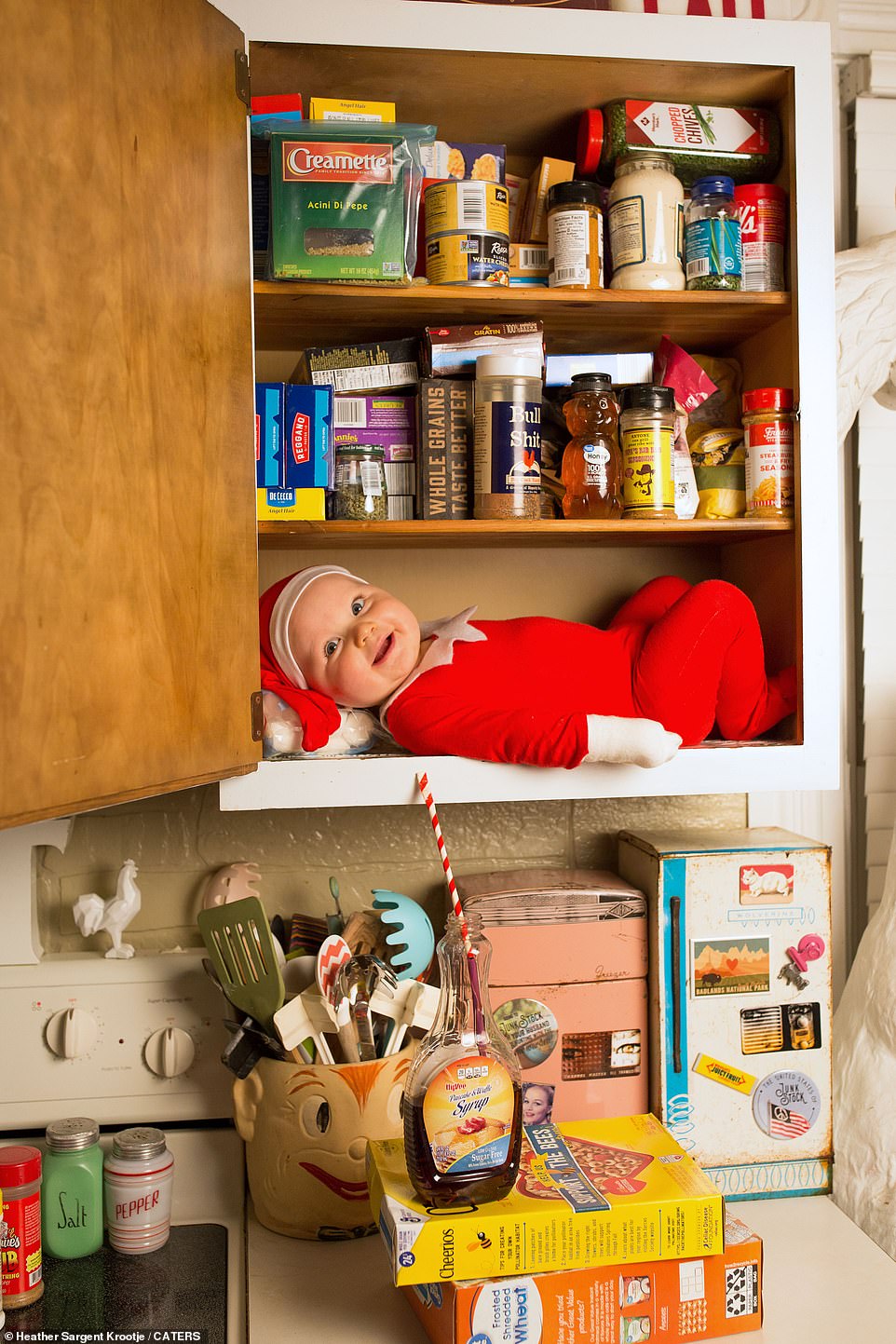 In an elf in the cupboard! Heather explained it took her about 20 minutes to set up each pictures of Frankie, which she shows to Charlie everyday

‘I thought it would also be funny for my eldest son, Charlie, nine, to see what his little brother had been up to, and also share the pictures with our friends and family.

‘It seemed like a hilarious and light-hearted idea to lift everyone’s spirits after the year that we have all had.’

Heather started planning this project at the start of November, she says that she started by looking through the internet for elf on the shelf ideas, and then decided which ones she could recreate using her son.

She added: ‘Being a photographer has been really helpful for this project as I have been able to take great pictures to demonstrate the scenes. 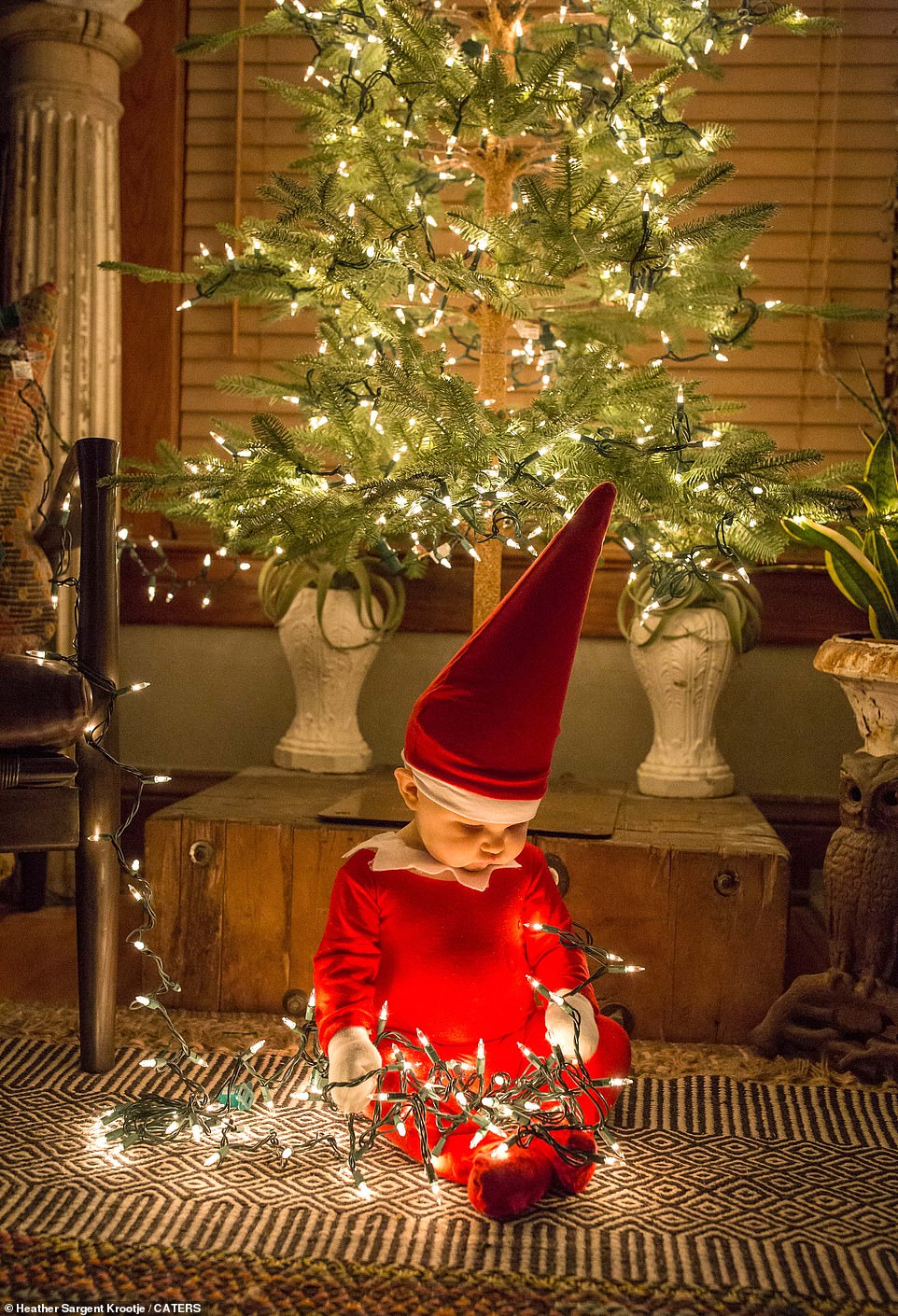 Tangled! The mother-of-two said she had the idea for the photoshoot in November, and used Photoshop to make the pictures even more festive

‘I also have a degree in graphic design, so I have been able to use Photoshop to really make the pictures better, for example, the scene where Frankie is swinging from the light shade, my husband was holding him but I was able to Photoshop my husband out to make it look realistic.

‘After I had decided on all of the scenes we were going to do, we were shooting four or five setups each day.

‘It took me about 20 minutes to set up each scene, and then I spent about 15 minutes shooting each one. 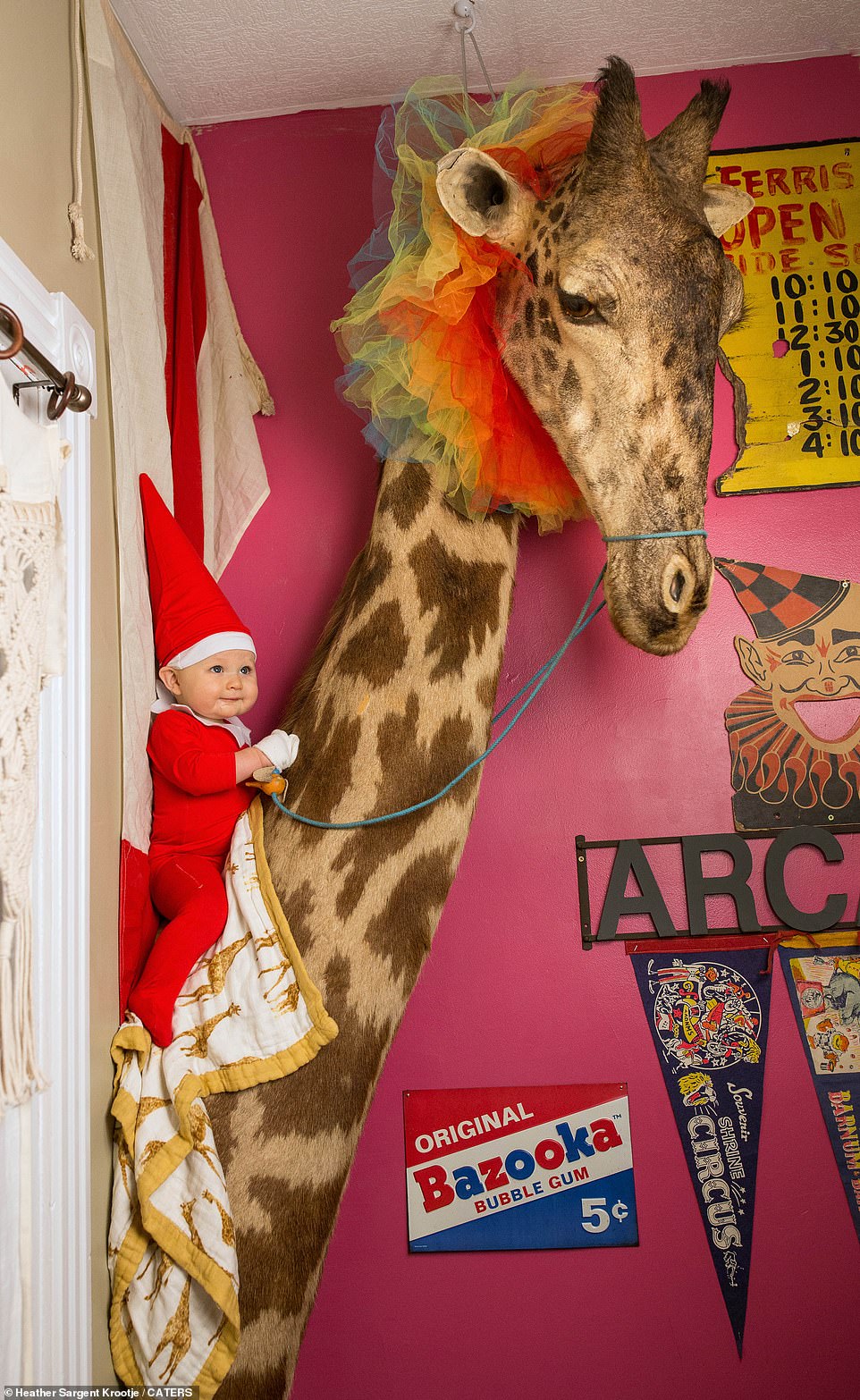 A Christmas safari! Heather’s favourite picture shows Frankie riding the family’s taxidermy giraffe, which is on display in their living-room 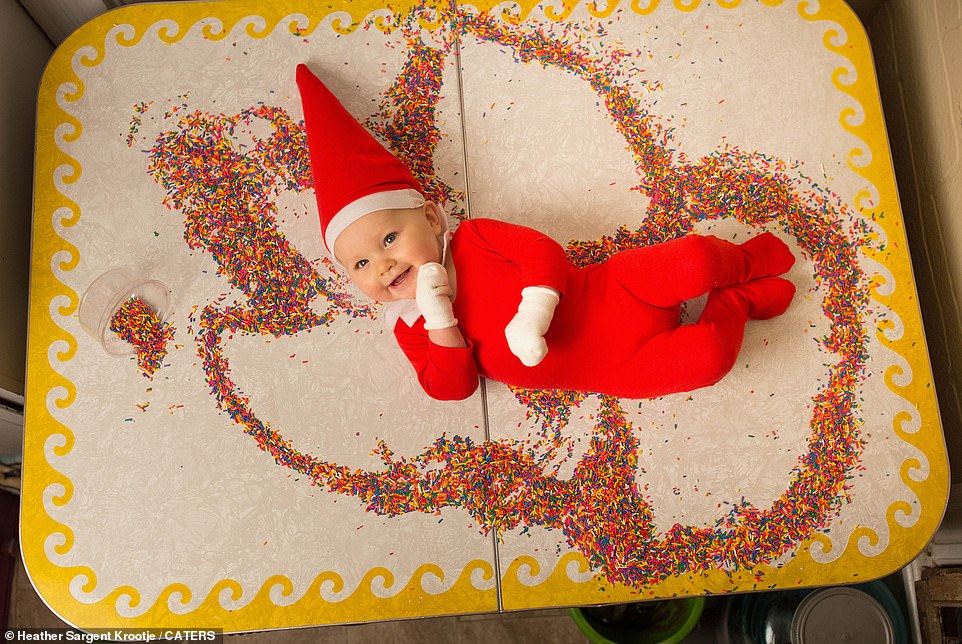 A Christmas angel, made with cake sprinkles. Heather said she shot several scenes a day, spending 15 minutes taking the snaps 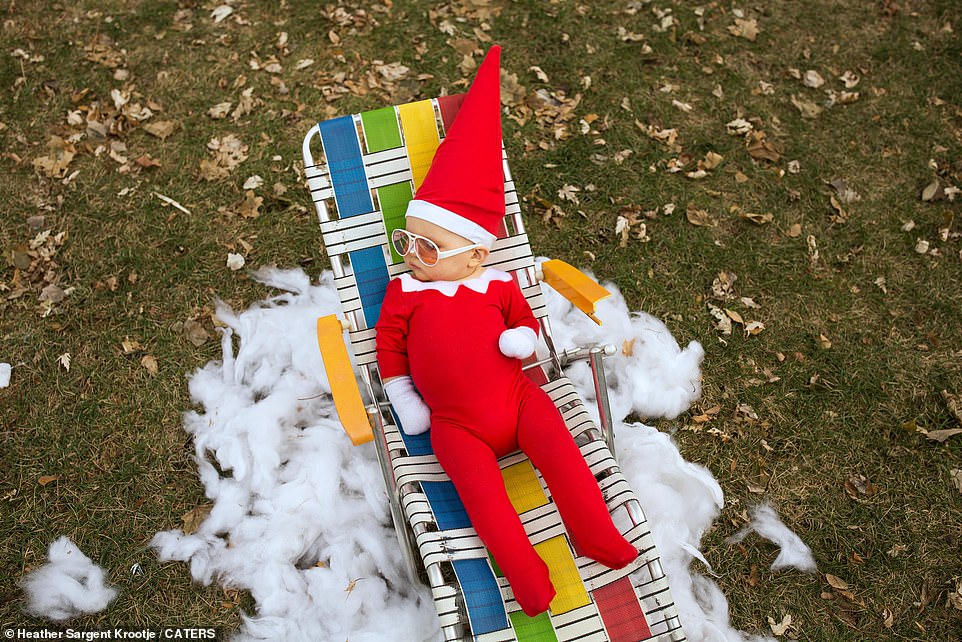 An elf kicking his feet up in the snow. 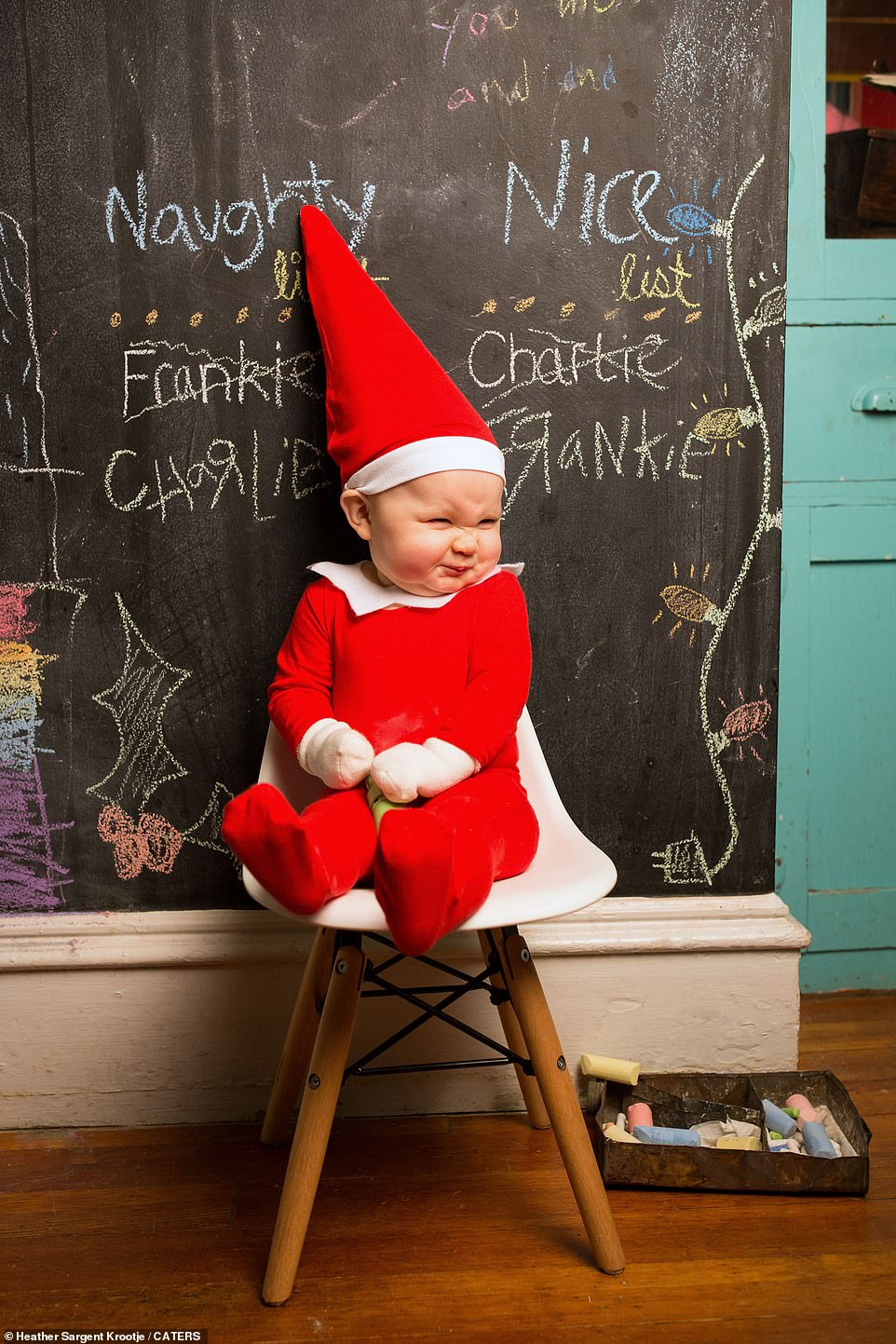 What an adorable mischievous little elf! Heather took one picture for everyday in December, as well as some extras just in case

‘I did one for every day of December, plus a couple of extras just in cases.

‘Then each day I show the picture to Charlie and upload it to Facebook for all of my friends and family to enjoy too.

‘My favorite one has been the scene where Frankie is riding the taxidermy giraffe which I have in my home, it is hilarious.

‘Frankie really enjoyed creating them with me, all his faces in the pictures are genuine, he was having a good time. He is a happy baby in general.’ 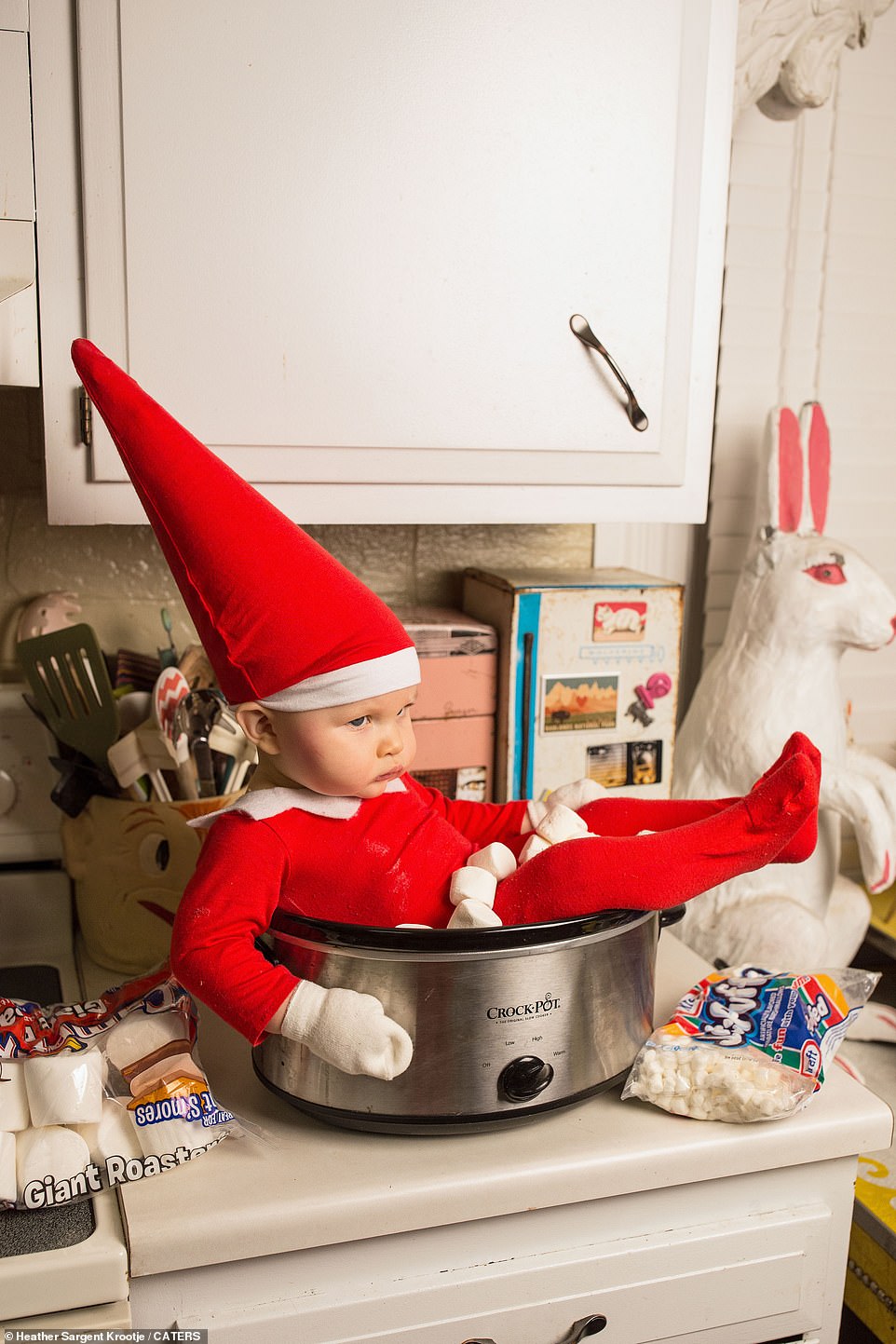 What’s for dinner? Heather’s friends and family have begged her to create a calendar with the pictures of little Frankie after the snaps proved a hit 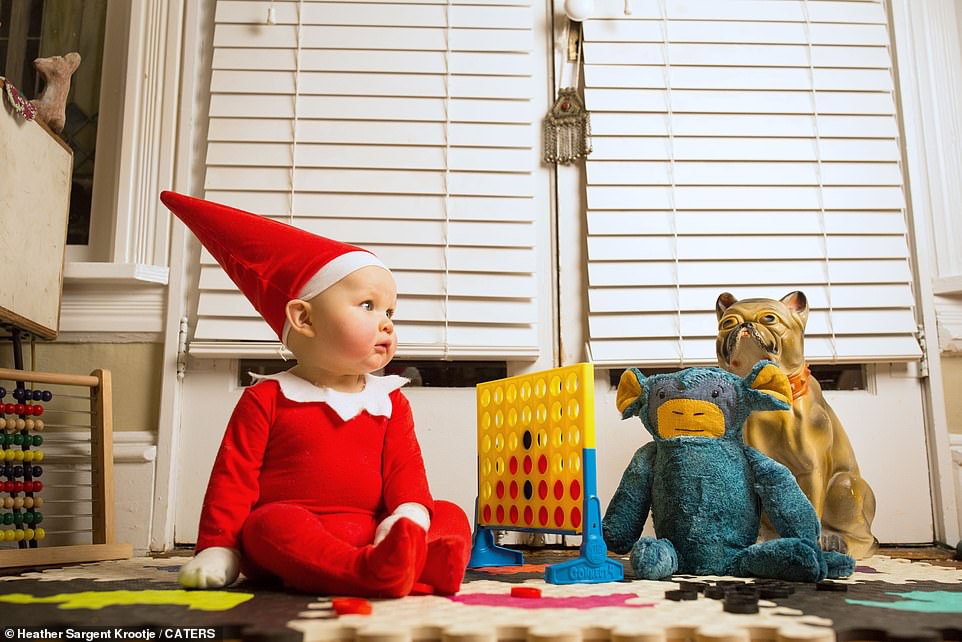 An intense game of 4×4 against a stuffed toy and a ceramic pug. Heather said her eldest, Charlie, was excited to see the picture each day 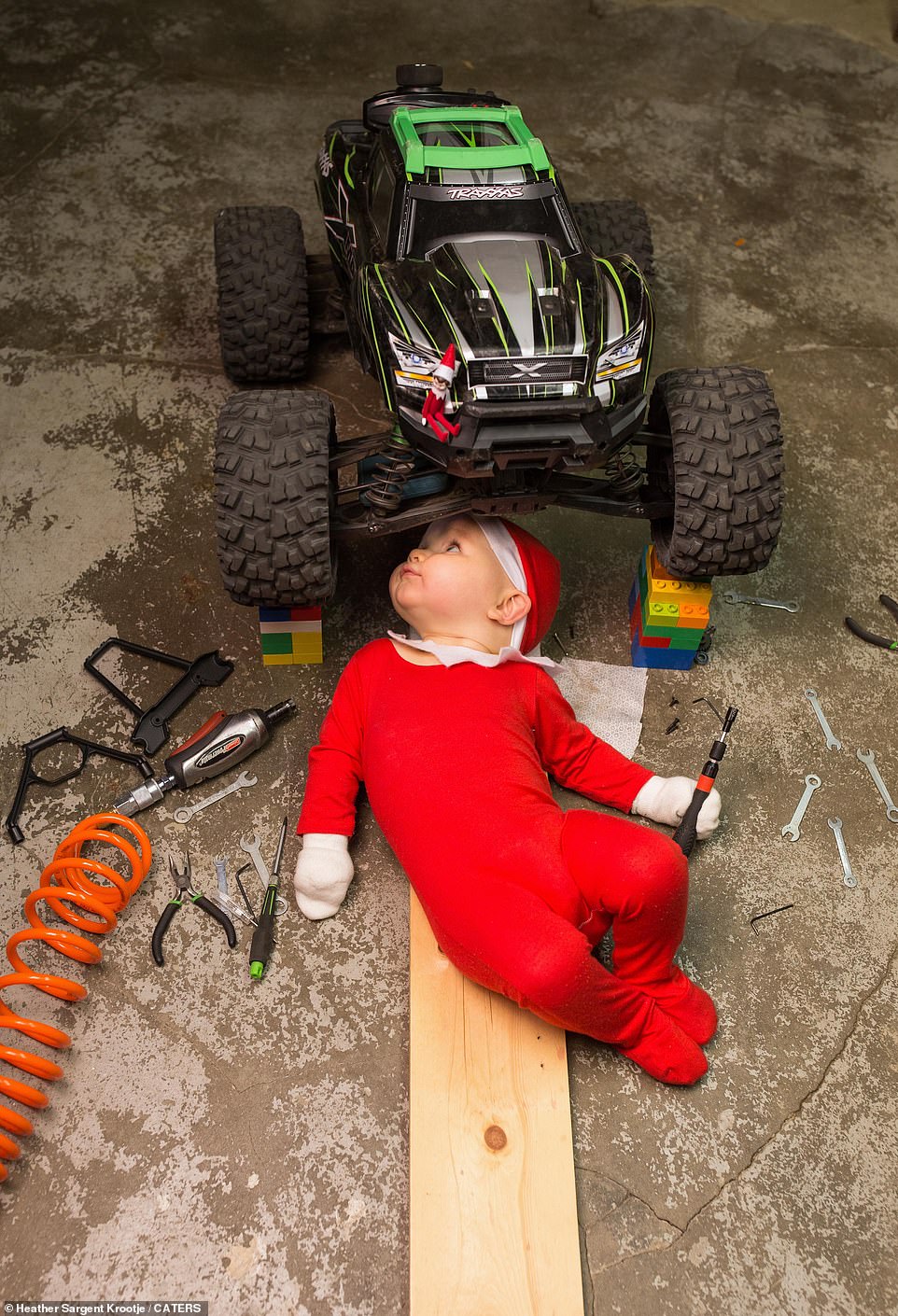 A handy little elf! Frankie looks like his fixing this toy car in the picture. Happy baby Frankie was happy to create the pictures with his mum, Heather said

Heather and Frankie’s real-life elf on the shelf creations has been a hit with friends and family, with many of them asking her to create a calendar or book with the photographs.

Heather says that they have all loved seeing the pictures each day and they get excited for the next day to come so they can see what Frankie had been up to.

She added: ‘Charlie has enjoyed seeing the pictures of his brother each day too in the run-up to Christmas, he has found it really funny.

‘I am really glad I decided to do it this year as it has lifted everyone’s mood, and I would love to do it again next year if Frankie is willing.’ 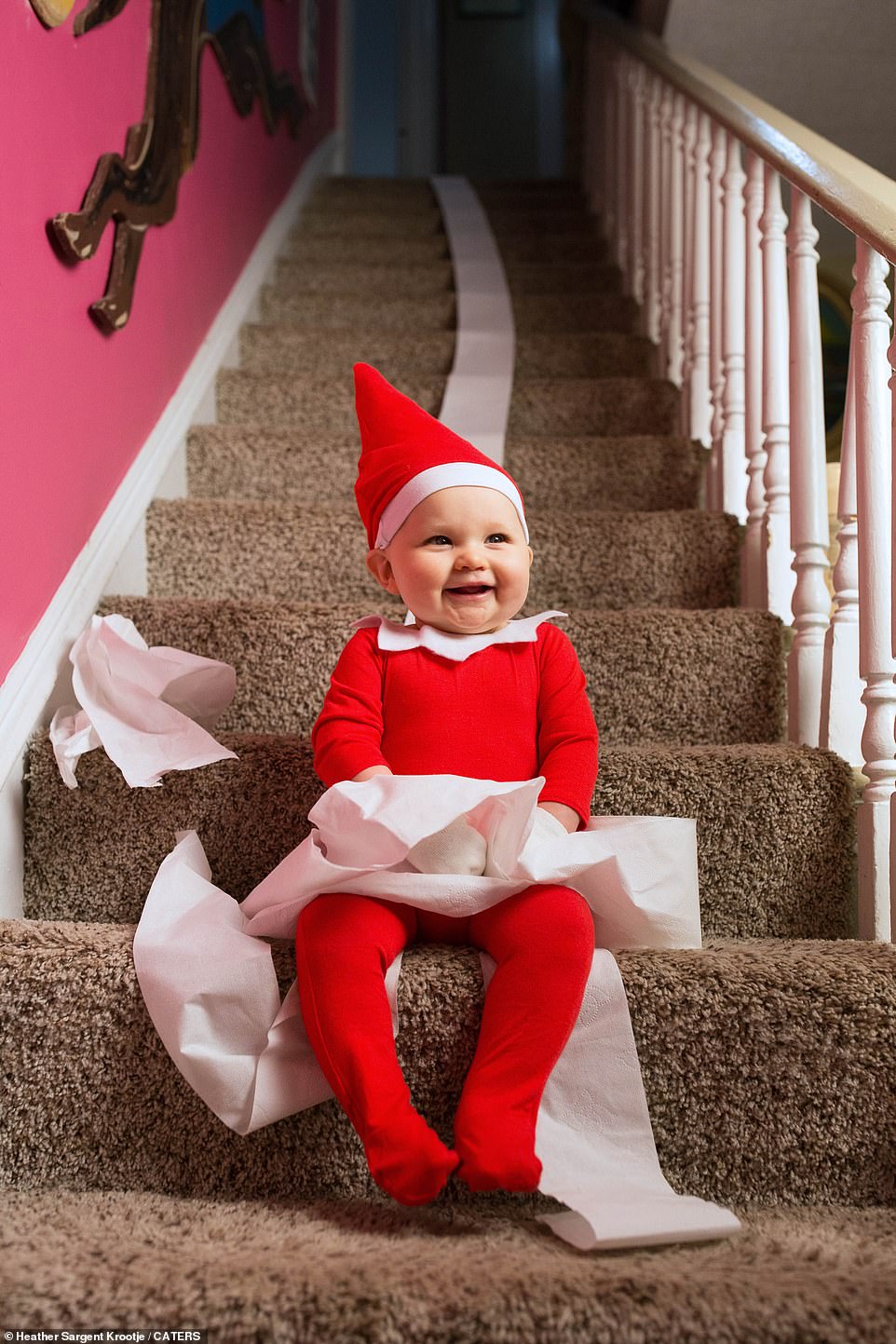 Frankie struggles to hide his glee after a roll of toilet paper fell down the stairs behind him. Heather put a lot of thought in his picture 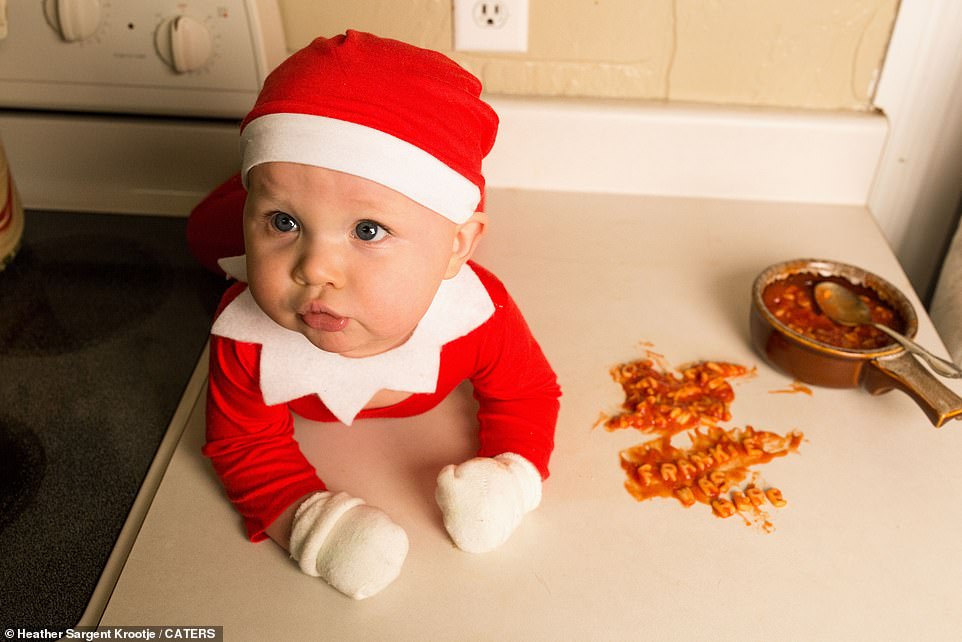 Adorable Frankie pouting next to a pool of spilled alphabet spaghetti reading ‘Frankie was here.’ Heather said she hoped to do a similar photo project next year 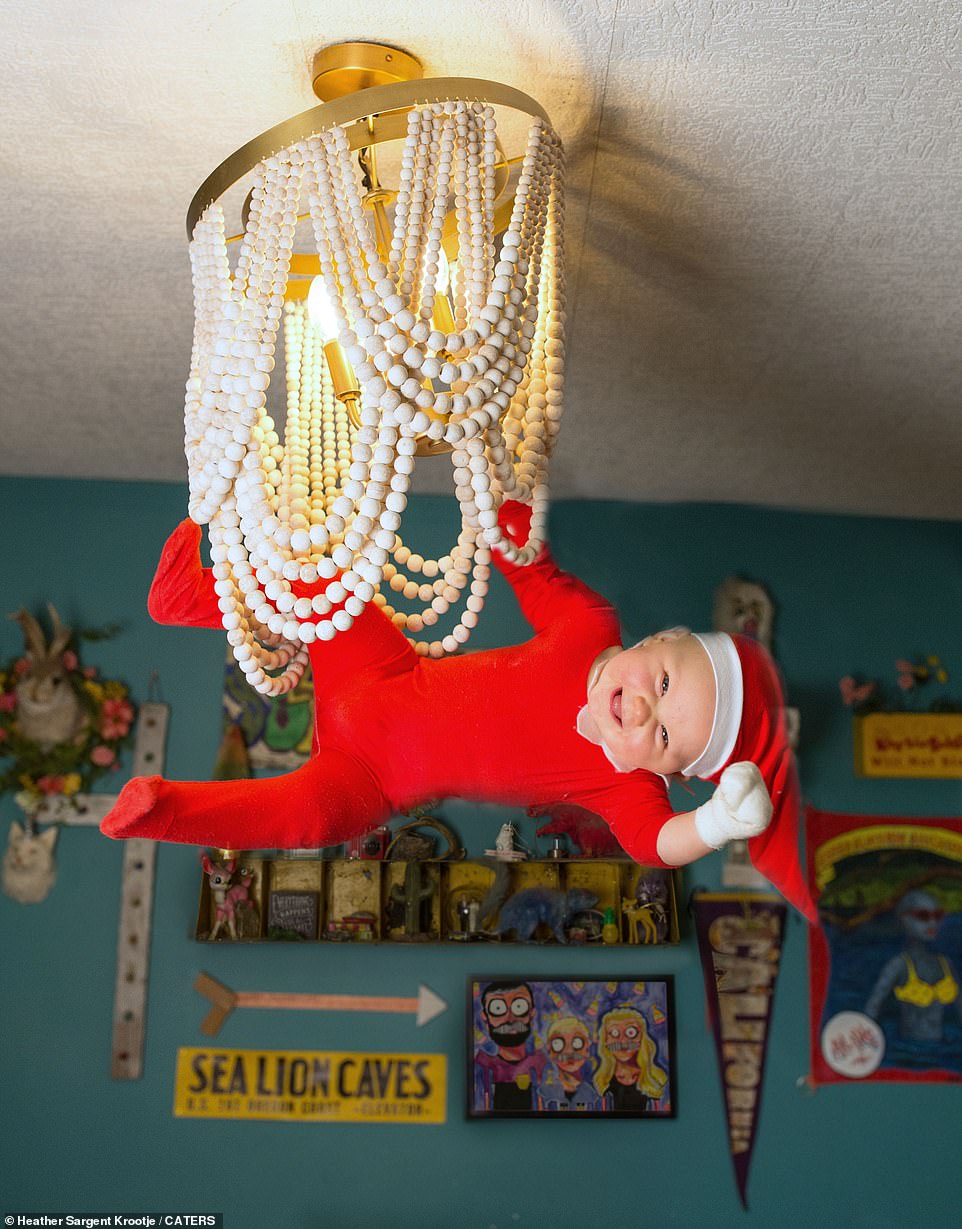 The mother-of-two used photoshop in order to create whimsical pictures, like this snap of Frankie hanging from the ceilling chandelier 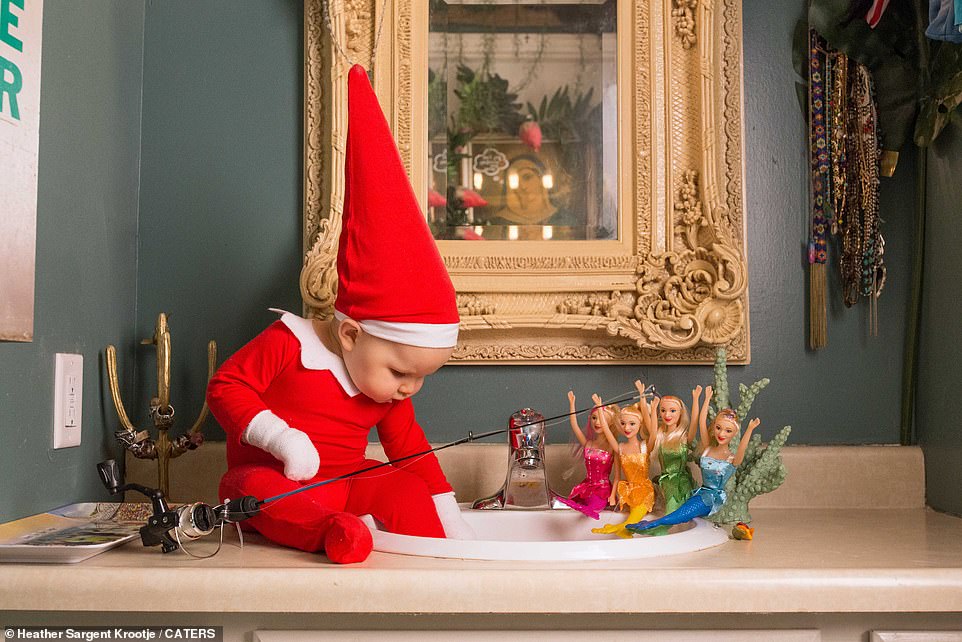 Fishing for mermaids in the bathroom sink! 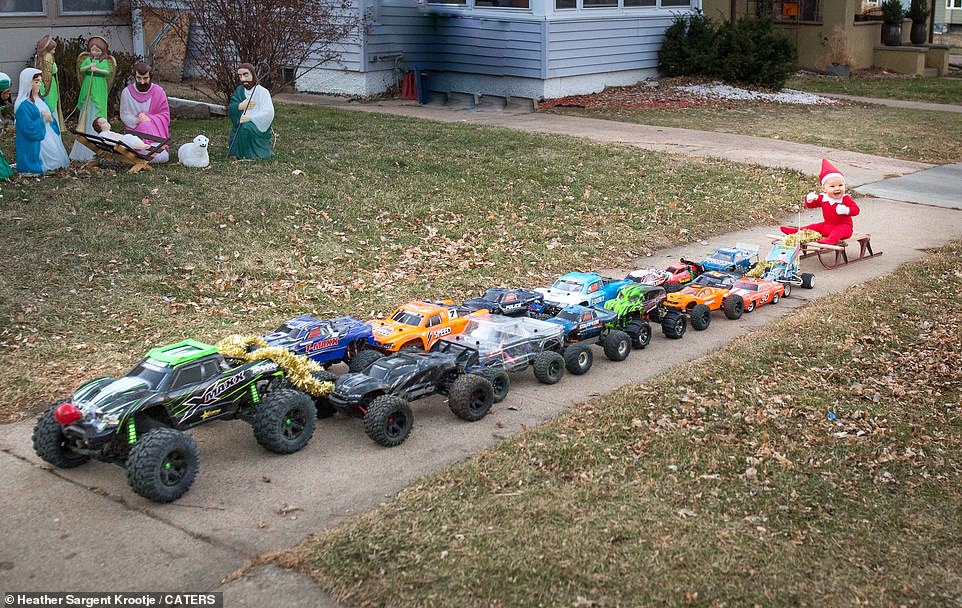 Eat your heart out, Santa! Ten-months-old Frankie pulls up on the lawn in his Christmas sleigh made of electrical toy cars. Hopefully he did not forget his licence at home 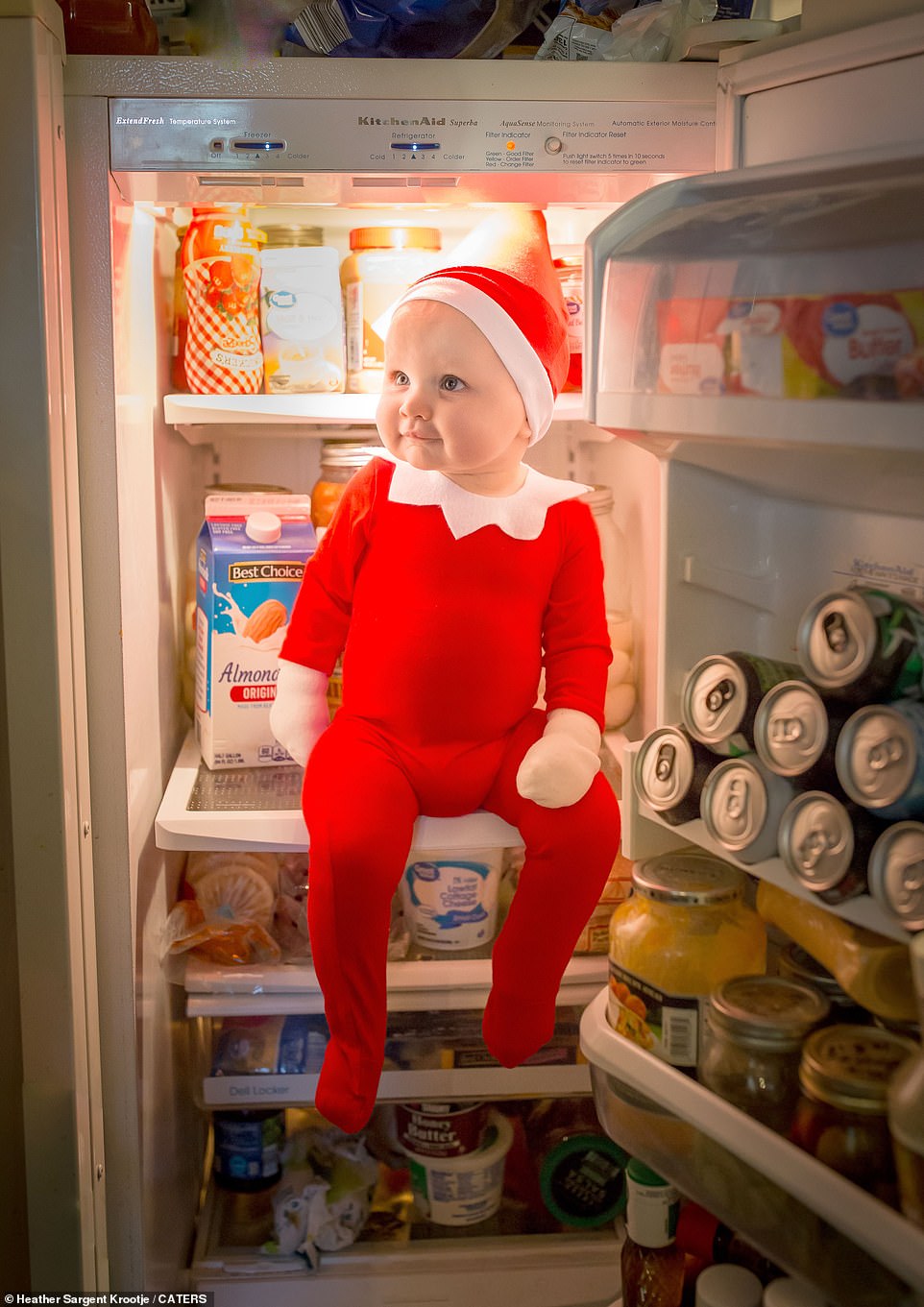 When’s dinner? Cute little Frankie is an elf… on the fridge’s shelf in this photo taken by his mother Heather ahead of Christmas 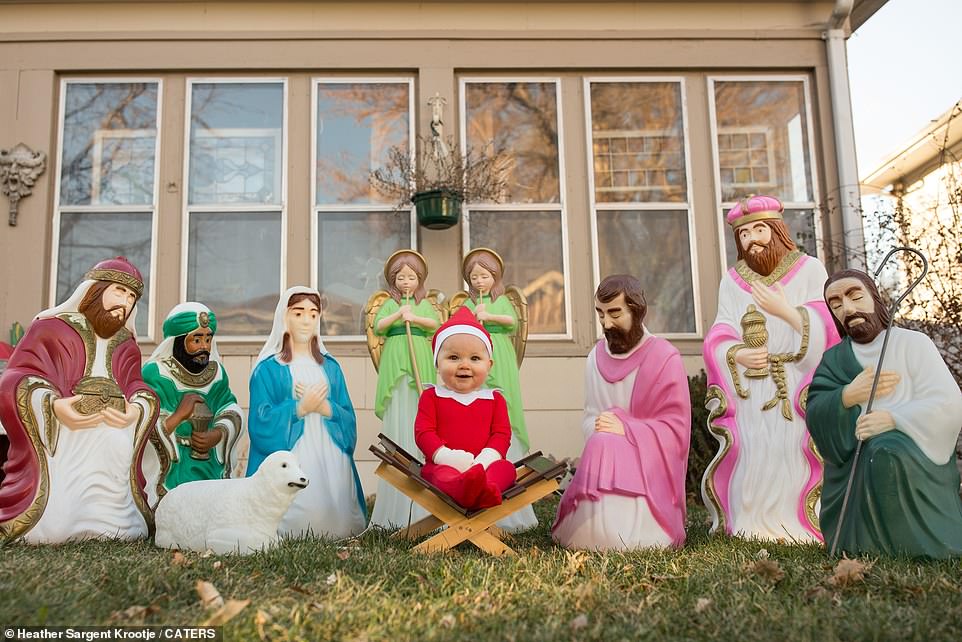 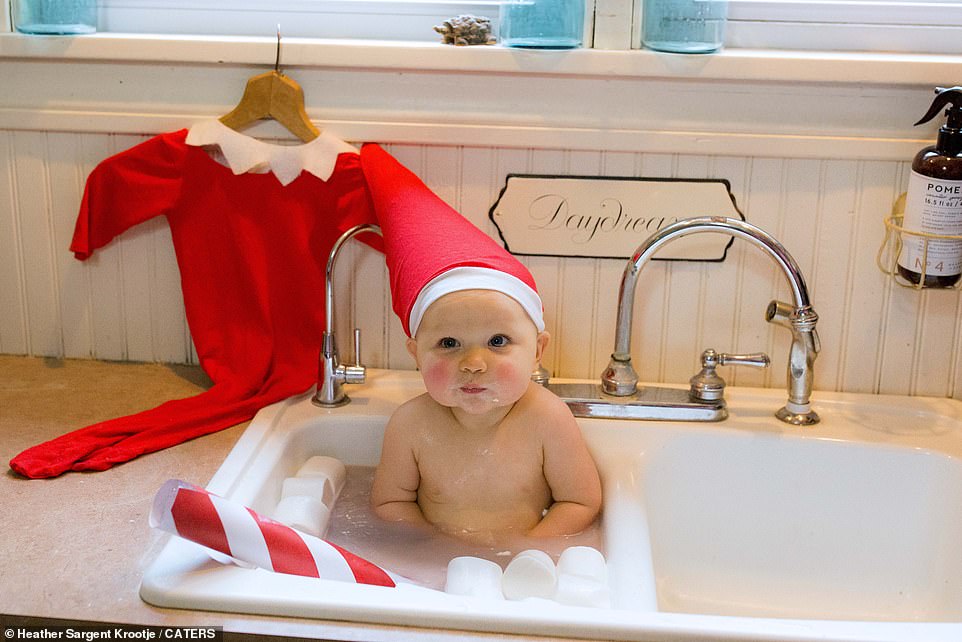