A mother-of-two was killed after being hit by a car as she tried to take a picture of the I’m a Celebrity castle.

Sharn Iona Hughes, 58, travelled ten miles from her home to Gwrych Castle in Abergele, North Wales to see the lights for the ITV show.

But charity volunteer Sharn, from Prestatyn, was pronounced dead after being struck by a blue Volvo estate car at around 5pm on Saturday on the A547 Abergele Road.

Her family said: ‘Her curiosity led to her wanting to see the lights at Gwrych Castle which unfortunately led to her untimely tragic death along a very busy road.

Sharn Iona Hughes, 58, (pictured) was killed after being hit by a car as she tried to take a picture of the I’m a Celebrity castle 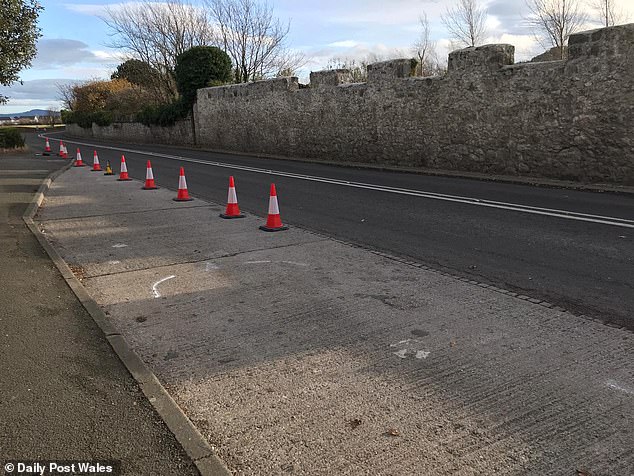 ‘We are truly heartbroken. She was hoping to take a photo and send it to a friend. We know that several others will have done and plan to do the same.

‘We urge people to take so much care and remember it is a busy main A class road.’

Fans have regularly been gathering at the spot – and the speed limit has been cut from 60mph to 30mph since the tragedy.

Her family confirmed she was ‘attempting to see the lights at Gwrych Castle.’

Sharn was ‘devoted’ to husband Elfyn and ‘loving mother’ to children Arron and Annah. 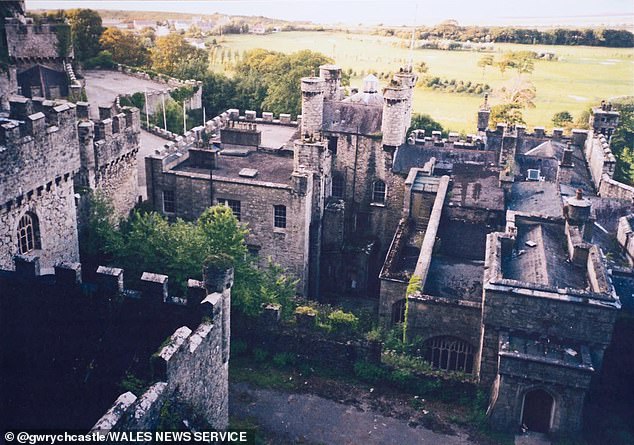 Sharn travelled ten miles from her home to Gwrych Castle (pictured) in Abergele, North Wales to see the lights for the ITV show 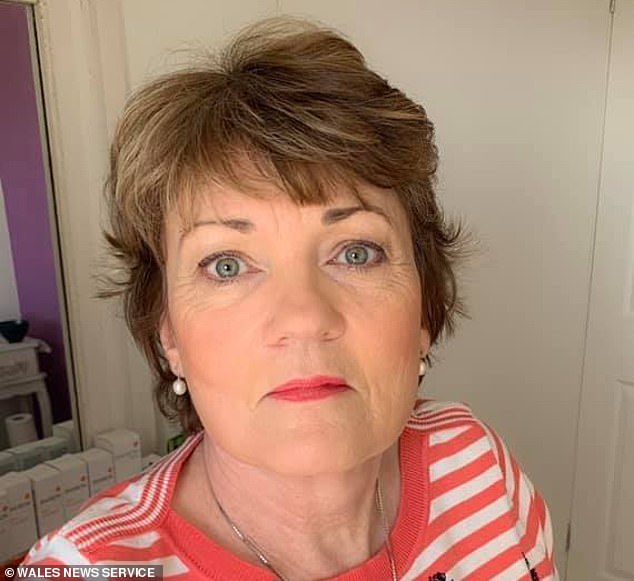 Charity volunteer Sharn, (pictured) from Prestatyn, was pronounced dead after being struck by a blue Volvo estate car at around 5pm on Saturday

The family said: ‘Her family and friends are in total shock and perplexed by her tragic death and wish to say the following about their loss.

‘Sharn was so selfless, and had such a joyous, charitable attitude to life.

‘She was in the process of organising deliveries of hampers to the local food bank through the Women’s Institute. We’ll miss her kindness forever.

A long-time family friend said: ‘Sharn was a beacon of light, her bubbly presence will not only be missed by us – her family – but also her colleagues, many friends and by the organisations to which she so generously gave her time, including Gallt Melyd Church, Gwaenysgor Choir, Trelawnyd Women’s Institute and the event’s coordinator Dyserth Women’s Institute for whom she was pivotal in organising educational, culture and charitable events’ 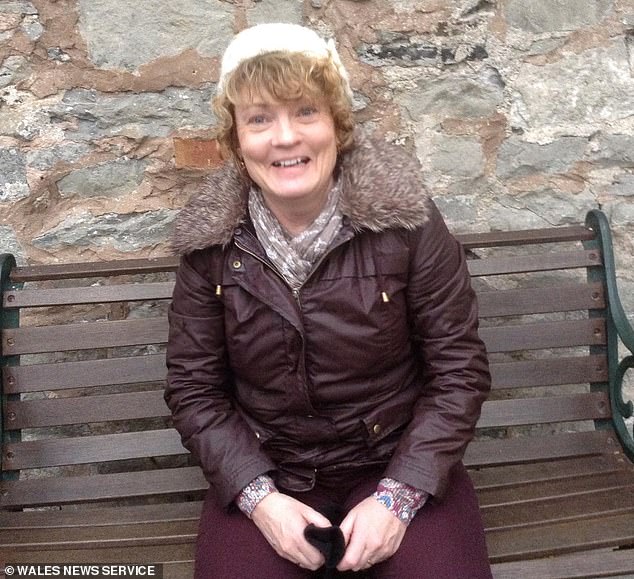 A member of the WI added: ‘She was very active in the community, she was very generous with her time, and just generous in total.

‘She put other people first and was a born organiser.

‘She belonged to two WI’s, was treasurer of Gallt Melyd Church, helping to organise collections for food banks and recently very proudly finished the couch to 5K.’

North Wales Police are appealing for witnesses or to anybody with dashcam footage to come forward.

Sergeant Raymond Williams from the Roads Policing Unit said: ‘Our thoughts remain with Sharn’s family and friends at this incredibly difficult time. She was clearly a much loved woman and her family are now being supported by a family liaison officer. 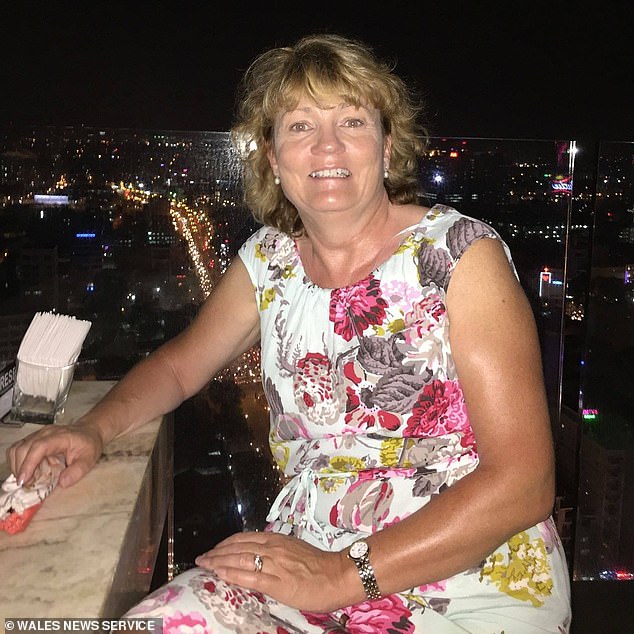 The family said: ‘Her family and friends are in total shock and perplexed by her tragic death and wish to say the following about their loss’. Sharn is pictured

Since the tragedy, the single carriageway road’s 60mph speed limit has been reduced to 30mph and a layby has been cordoned off with traffic cones.

A Conwy Council spokeswoman said: ‘Our thoughts are with the family and friends of those involved.

‘The circumstances surrounding the incident are currently being investigated by North Wales Police.

‘It would be inappropriate to speculate on the circumstances before the police have had an opportunity to conclude their investigations.’

The A547 was closed for more than 15 hours following the tragedy and the investigation is still ongoing.

On Sunday one local man said: ‘Barriers have been put up on pavements further down the road because of the expected influx of sightseers although they get a better view of the lit-up Gwrych castle from Pensarn beach where it’s also safer. 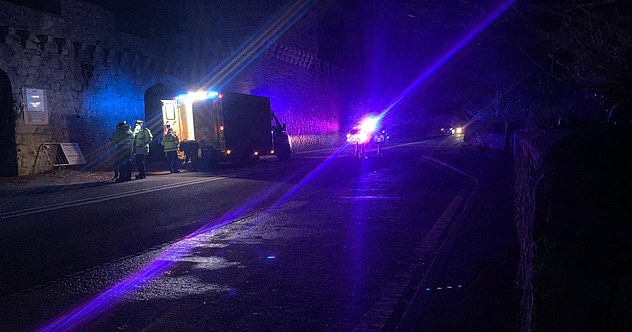 The A547 was closed for more than 15 hours following the tragedy and the investigation is still ongoing. Pictured is an ambulance at the scene on Saturday evening 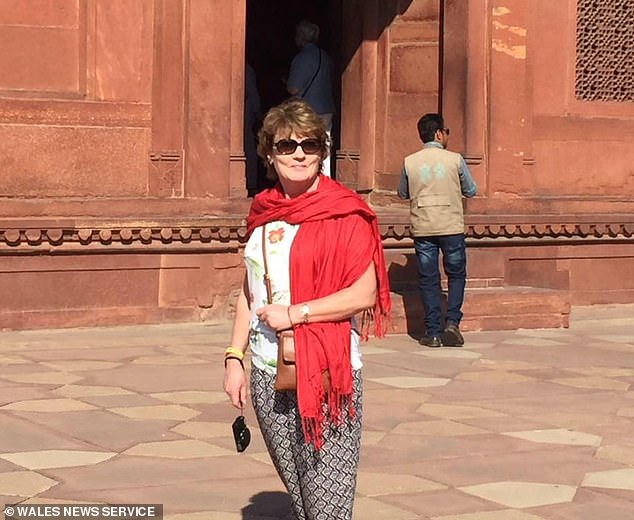 Her heartbroken family have said she had a ‘joyous, charitable attitude to life’.  Sharn is pictured

‘Where this happened is a dark section of road and there have been some nasty accidents before.’

He added : ‘There were some I’m a Celebrity fans outside the castle on Saturday night.

‘But whether the show had anything to do with what happened, I don’t know. There is a private entrance into the castle grounds nearby.’

On social media there were claims that some fans were climbing walls to try to get snaps.

More than 40 security guards are protecting the I’m a Celebrity… Get Me Out Of Here! campmates at Gwrych Castle – the show’s new home after relocating from Australia due to the coronavirus pandemic – with some roads nearby closed. 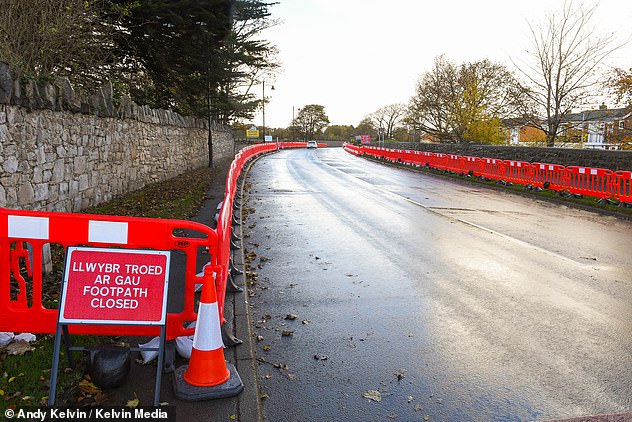 I’m A Celebrity at Gwrych Castle in Abergele North Wales. The area has seen footpath closures and a 30mph speed limit introduced near to the entrance to the TV production site

Wardens in high-vis jackets have been seen at the entrances which have been sealed with wire fences as guards with night-vision goggles patrol inside the forest surrounding the camp.

Paths leading into the 4,000-acre estate have been blocked including those near Emily’s Tower which is above the Grade I listed 19th century castle.

Pavements in front of the main entrance have been blocked off to stop people congregating and a camp site and Manorfan Farm Park next to the castle have also been closed.