A mother-of-two with a crippling fear of vomiting has told her husband to leave her so he can have a better life.

Lisa Partington, 36, has suffered from emetophobia since she was 24 years old, after being triggered by her grandmother’s sudden death.

Emetophobia is an intense fear of vomiting or seeing other people vomit and can significantly impact sufferers’ ability to lead a normal life.

After living with the condition for 12 years, the mother from Peterborough said her condition has affected her relationships with everyone in her life – including her own children.

Lisa, who runs her own business as a virtual assistant, described how close she was with her grandmother after her mother remarried and had lots of step children to focus on.

Lisa Partington (pictured) has suffered with emetophobia since she was 24 years old. She is so afraid of being sick and vomit that she is scared of her two children

At the same time that Lisa lost her grandmother, who passed away peacefully yet suddenly in her sleep, she went up for a promotion at work that never materialised.

Shortly after her grandmother died, Lisa moved out of her mother’s house – and as the stress built up, her fear of sickness began to develop.

She says: ‘One day I tried to drive to work. I’d woken up in the middle of the night feeling sick, I woke up and tidied my bedroom as that’s what I used to do.

‘I got in my car to go to work and I got onto a slip road to go onto a dual carriageway but I couldn’t do it.

‘I ended up reversing off the slip road and driving to my mum’s house, which is where I stayed for the next four months.’

This was the start of Lisa’s debilitating phobia, which is also associated with social anxiety, OCD and eating disorders.

The following year when Lisa’s mother got food poisoning, she said things ‘got worse and worse’. 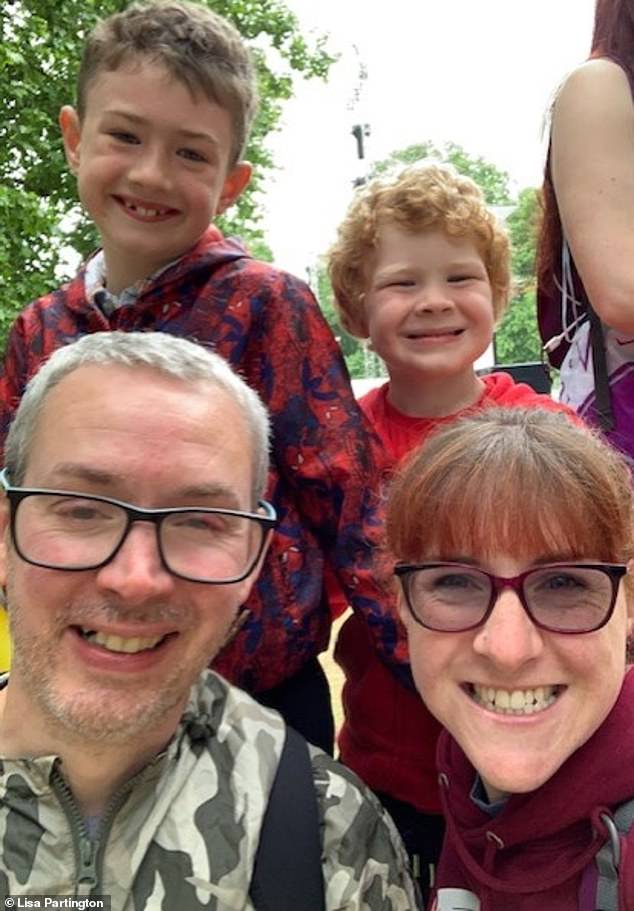 The mother-of-two, 36 (bottom right), has told her husband (bottom left) that he and their children, aged seven and four (pictured at back) and should leave her so they can live without her phobia

She spent 24 hours a day pacing around while waiting to be sick. Within a month she had been signed off work and became unable to leave the house, eat or sleep because she was so frightened of vomiting.

When Lisa met her husband and the pair started dating, she recalled feeling so anxious about emetophobia she tried to call the whole thing off.

She explained how she began to lose friends after becoming housebound.

‘When you say no to going out enough times people get bored of you,’ she said.

‘Nowadays it can be hard to maintain friendships because I’m avoidant of a lot of places. 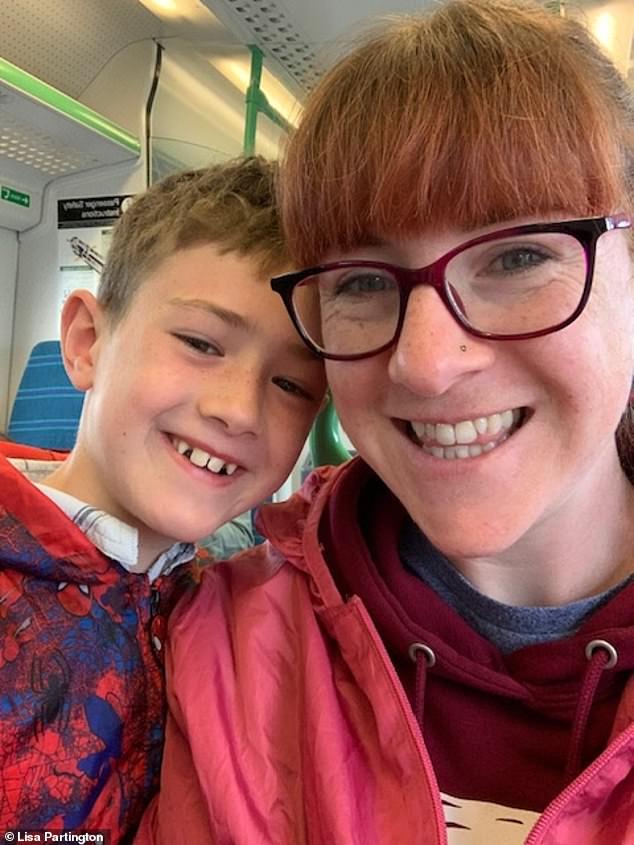 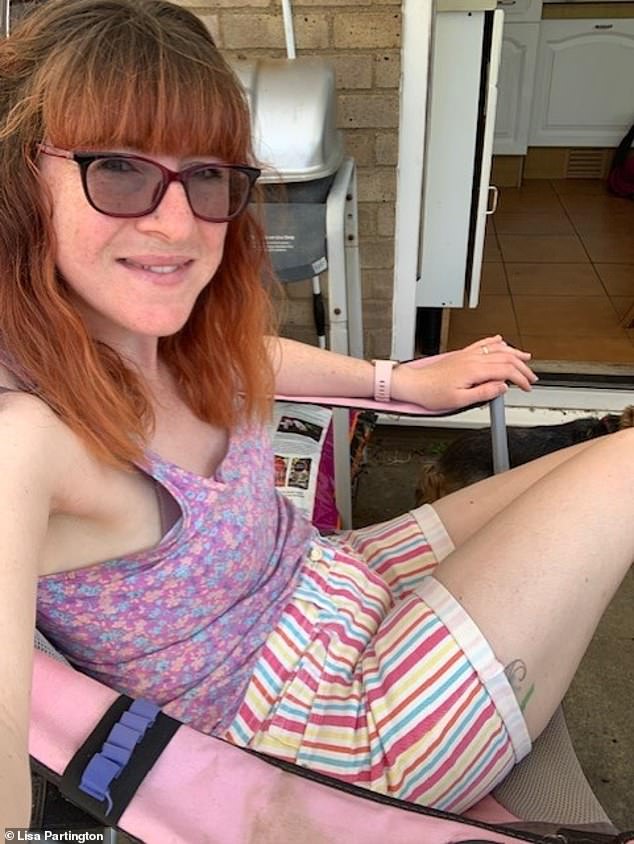 ‘I do explain my phobia to people but not many people fully understand it which makes it hard.’

Lisa explained how she relies on her husband heavily when it comes to raising their two sons, who are aged seven and four.

Having her children wasn’t easy for Lisa, who was terrified at the thought of suffering from morning sickness.

She recalled her husband turning over the pregnancy test and crying happy tears, while her first thought was, ‘can I get an abortion’.

However, Lisa was lucky that she didn’t get sick during her pregnancy and says that even though her phobia is awful she wouldn’t be without her children, and is eternally grateful for them. 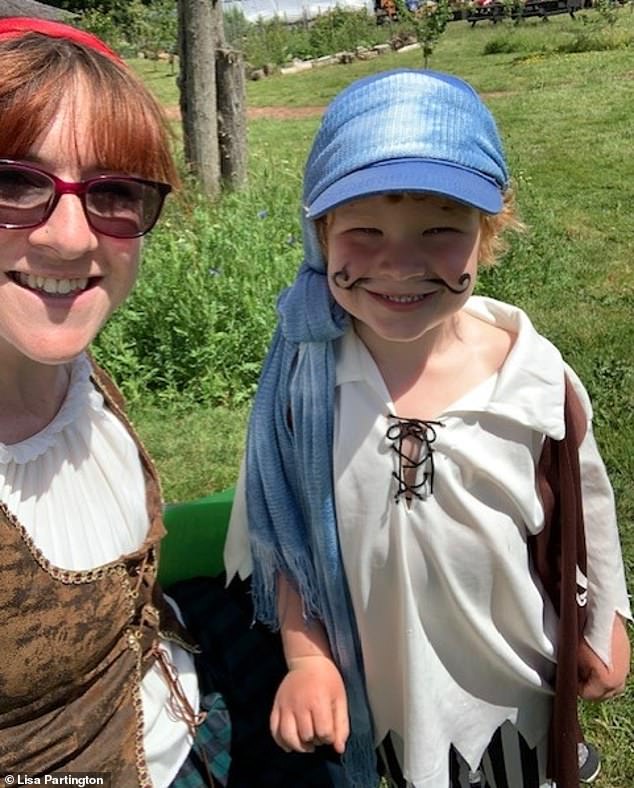 She once met woman in her 50s or 60s who also suffers from emetophobia and recalls her saying: ‘You’ve had kids, I could never do it.’

During her pregnancy Lisa met with a consultant and put things in place for her pregnancy and labor, for example she had to be careful with pain relief as many of them cause nausea.

Now that her kids are growing up and can pick up bugs at school and nursery, Lisa heavily relies on her husband.

Emetophobia is a fear of vomiting and/or other people vomiting. It is a widespread common phobia.

The numbers likely vary depending on whether the study focuses on a fear of vomiting compared to a severe phobia.

Emetophobia is associated with other fears and disorders, such as phagophobia (a fear of gagging, swallowing or choking), a fear of pregnancy, social anxiety OCD.

Many sufferers avoid eating in restaurants or consuming food that has been prepared by others.

It can also often trigger tocophobia – the fear of becoming pregnant – due to concerns about suffering from morning sickness.

This can lead to women choosing not to get pregnant or to have an abortion if they do fall pregnant.

Those who do have children can become consumed by worry about them being ill.

They may feel completely unable to look after their children when they are unwell.

Emetophobia is often considered a ‘secret phobia’ because many who suffer are too embarrassed to talk about it.

She said: ‘If one of them is sick I cannot go near them, so he looks after the ill one while I deal with the other.

‘I often feel like an awful mum because there are many things I feel I cannot do, and I think my anxiety affects my sons.

‘It puts a lot of pressure on my husband and he doesn’t get a lot of opportunity to go out and see his friends as I need his support at home. I do feel very lucky to have such an understanding partner.’

When Covid hit, Lisa’s anxiety became unbearable and her husband eventually had to give up work to find a new job.

She explains that she wasn’t actually worried about catching Covid-19, as it is not related to sickness or vomiting.

What concerned the mother-of-two was her kids returning to school and pre-school. At the time the pandemic hit they were aged five and two.

During the pandemic Lisa was homeschooling her five year old, working part time in a supermarket and building her own business.

Her husband, who was classed as a key worker, worked an hour’s drive away, leaving Lisa to look after both children most of the time.

The task was especially difficult due to the fact her youngest son has sensory difficulties.

However, Lisa managed to cope well until the schools reopened and sickness bugs began to circulate as well as a rise in Covid-19 cases.

In September 2021, Lisa was working in an army barracks when a sickness bug began to do the rounds.

She says: ‘I basically become agoraphobic, so I wouldn’t leave the house because for me everywhere I went there were germs and I worried I would catch a vomiting bug.

‘I couldn’t eat, I didn’t sleep because for me you’d go to sleep fine but end up waking up being sick.

‘So I wouldn’t eat, couldn’t sleep, wouldn’t leave the house. With work it was really really debilitating and it took me a long time to then get out of that.’

The following month Lisa told her husband he couldn’t go to work as she was too frightened to stay at home with the kids.

She recalls their eldest son having his flu vaccine and feeling slightly under the weather afterwards.

He had an upset stomach and went off his food.

While Lisa’s phobia spiralled out of control, her mother also fell ill with cancer and underwent gruelling chemotherapy.

Suffering from intense agoraphobia Lisa couldn’t make the 50-mile drive to see her mother while she was ill – but luckily her stepfather went out of his way to drive her mother to them.

Lisa says: ‘We are really close, but it would add to me feeling awful. She would travel 50 miles feeling awful, because I couldn’t get in a car to get to her.’

Thankfully, after having treatment, Lisa’s mother is now in remission. 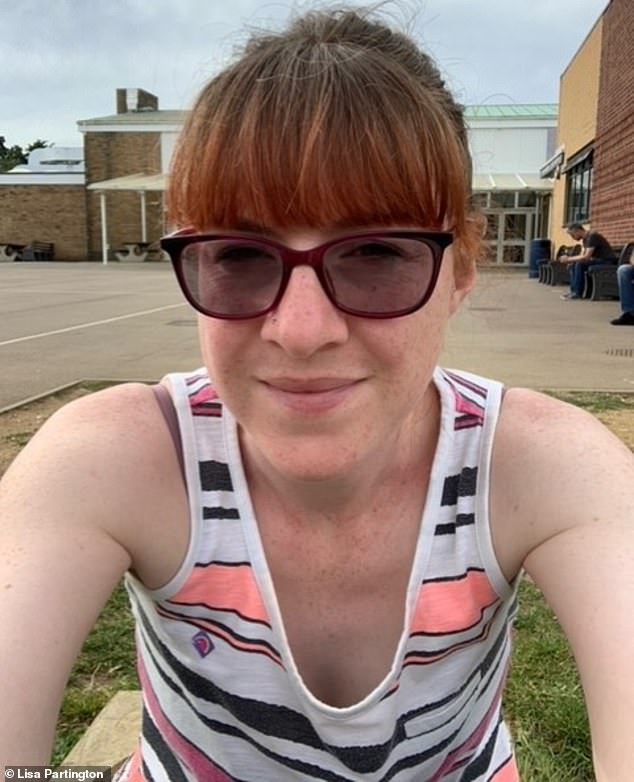 Lisa’s phobia started at the age of 24, a year after she lost her grandmother, moved out her mother’s home, and lost a promotion at work

But while her husband is understanding, Lisa’s phobia has caused tension between them.

One day when the school called to say her son needed to be picked up from school with a tummy ache, Lisa asked her husband to leave work so he could come home and look after him.

But by the time her husband had returned, it was clear their son just had a case of trapped wind and was bouncing around the room.

Lisa husband just glared at her, angry that she had called him home from work for nothing.

Lisa said: ‘My entire life is planned around my children which is really hard when I’m absolutely terrified of them.’

While Lisa adores her family, she says she has told her husband several times to take the children and leave so they can have a different life not hindered by her phobia. 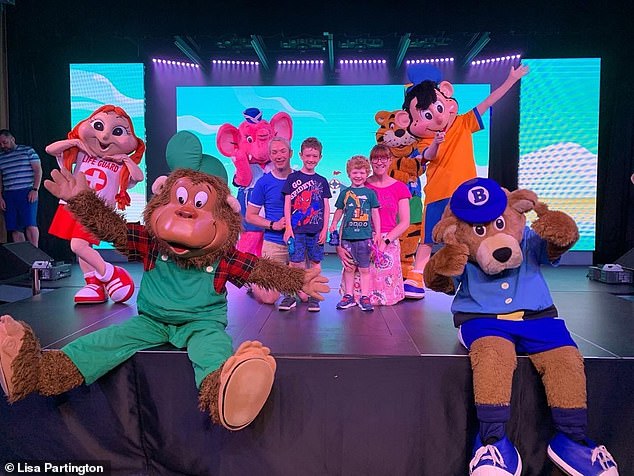 Lisa is now receiving cognitive behavioural therapy (CBT), which has helped her to become less avoidant of situations. She is pictured here on holiday with her husband and two children

She says he wants the family to do things, go out and go to festivals, and not only go places only 10 minutes away from their house.

And as the boys get older, they have picked up on their mother’s phobia too.

Lisa’s eldest son, now seven, is aware that she is stressed and worried and snaps a lot.

‘He is now aware that I have emetophobia,’ she explained. ‘We did try to keep it from him for a long time.

‘He knows that mummy’s scared of sick. And I’ve got a horrible feeling that it is rubbing off on him a bit, as the last time his brother was sick he got really funny about it and wouldn’t go near his brother.

‘I don’t think they know I’m scared of being around them. But it’s hard to ignore when Mummy won’t sit down and is walking around a lot.’ 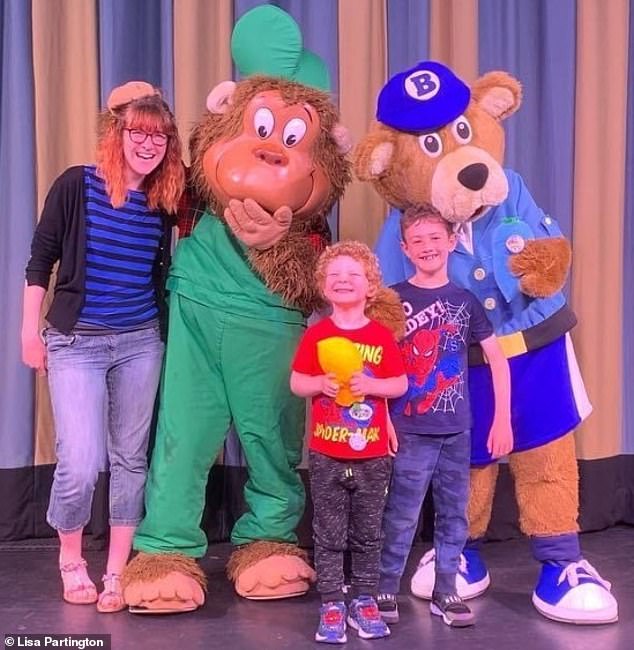 Lisa is about to begin Rob Kelly’s Thrive programme, which treats the person as a whole

Lisa is trying to overcome her emetophobia and is hopeful for a life without it.

She is receiving cognitive behavioural therapy (CBT), which has helped her to become less avoidant of situations.

Since embarking on CBT she has been able to sit with her children and get in the car with them to do a 50-mile drive.

However, she says that CBT alone won’t cure her phobia as it is one of the hardest phobias to cure, and so she is embarking on Rob Kelly’s Thrive programme.

Lisa explained that Thrive ‘treats the whole person.’ She says ‘By curing the phobia you are helping your whole life in different areas.

‘I am hopeful to one day work through the programme and not be waiting for my kids to become teenagers for when they can look after themselves.’