A mother-of -three ‘died like a warrior’ after fighting off the Nice terrorist and raising the alarm about the attack, her distraught family and friends said last night.

She fled to a nearby restaurant to seek help but died from her injuries.

Her last words to paramedics were: ‘Tell my children that I love them’.

Simone Barreto Silva, a 44-year-old Brazil-born mother of three was one of the victims of an attack on a church in Nice on Thursday. The former samba dancer is pictured here with Brazilian football legend Ronaldinho

Brahim Jelloule, manager of the Unik café opposite the church, told France Television: ‘She crossed the road, covered in blood

‘She was still talking, she was saying that there was someone inside (the church).

Her sister Solange Barreto told South American newspaper Correio of Bahia: ‘My sister was on her way to work when she passed the church and gave her prayers.

‘She fought against the assassin and even when she was wounded manage to leave the church seeking help and warning everyone what had happened until the police arrived.

‘With her goodness she avoided a tragedy which could have been even bigger.’ 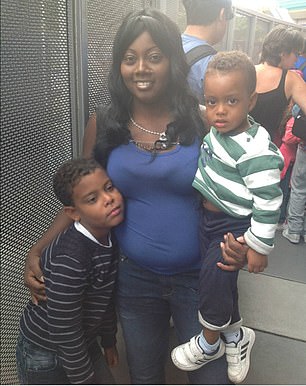 Silva raised the alarm about the attack before dying. Her last words to paramedics were: ‘Tell my children that I love them’

Anderson Argolo, a priest who knew Miss Silva’s family, told newspaper Folha de S. Paulo: ‘She was a fighter, and she died like a warrior.

Despite being hurt, she ran and was able to sound the alarm, preventing a bigger tragedy.’

Miss Silva had moved to France from Bahia, in northeast Brazil, as a teenager.

She studied at Nice Sophia Antipolis University before training to become a chef in a hotel.

Jorge Bezerra, a musician friend, said Miss Silva danced samba and had been in shows at Brasil Tropical, a Brazilian cabaret in Paris.

She performed in a quartet with her sisters Solange, who also lives in France, Barbara and Conceicao.

Her friend Ivana Gomes Amorim told G1 that Miss Silva was playful and dreamed of traveling around the world in a food truck.

Last night another friend named Mirian laid flowers outside the scene of Thursday’s attack before adding: ‘She was such a brave, wonderful person. Her passion for cooking was incredible; we were sharing recipes just days ago.’

In a statement, Brazil’s Foreign Ministry said its embassy in Paris was providing assistance to the dead woman’s family.

‘Brazil expresses its firm repudiation of any and all forms of terrorism, regardless of its motivation, and reaffirms its commitment to work to combat and eradicate this scourge,’ it said.

The country’s president, Jair Bolsonaro, said: ‘She was there praying and this man who hates Christians came in. When we talk about Christianophobia this is what we mean … we have to fight this, and not with flowers.’

A series of security lapses allowed the alleged Nice terrorist to slip past Italian authorities and stab three innocent people to death, it emerged last night.

Tunisian Brahim Aouissaoui, 21, should have been detained and deported from Europe when he arrived in Italy without papers and was thought to have coronavirus – but he was instead released in a blunder.

The suspected jihadist was then free to travel to France undetected and butcher his victims with a 12in blade in the port city’s Notre Dame Catholic basilica on Thursday. 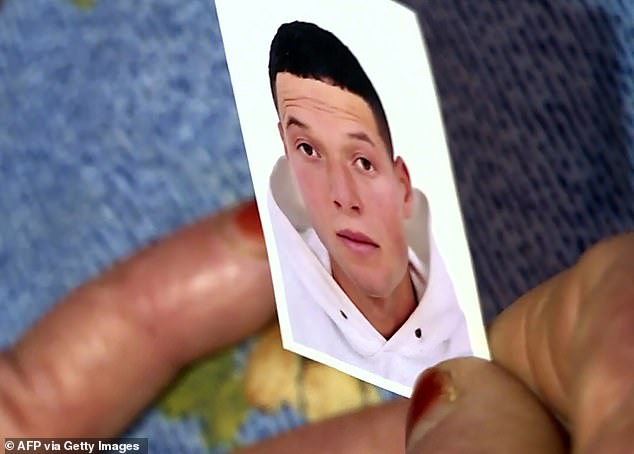 An image of terrorist Brahim Aouissaoui is held by his mother in the Tunisian province of Sfax, where she revealed that she had begged her son not to travel to France

Yesterday it also emerged that Aouissaoui had been arrested in 2016 for violence and using a knife, according to Tunisian officials. And his mother said he was a former drug user and heavy drinker but had recently become more devout;

Aouissaoui allegedly shouted ‘Allahu Akbar’ as he attacked father-of-two Vincent Loques, 54, Brazilian mother-of-three Simone Barreto Silva, 44, and tried to behead a 60-year-old woman who has not been named. 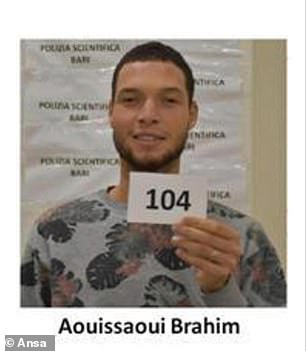 Brahim Aouissaoui, 21, killed three people in an attack on a church in Nice, France on Thursday

The suspected knifeman’s mother, Gamra, said her son, who is one of 11 siblings and had worked as a motorbike mechanic since dropping out of school, had recently become more devout and had been shutting himself off from friends before he left for Europe.

Speaking to a French TV network at the family home near the Tunisian port city of Sfax, she said: ‘He started praying more about two-and-a-half years ago, he wasn’t going out or meeting with other people.’ Before this renewed interest in Islam she said ‘he drank alcohol and used drugs. I told him, ‘We are needy and you are wasting money’.’

Aouissaoui had followed a ‘classic migratory route’ to Europe from North Africa, arriving on the Italian island of Lampedusa on September 20, a security source said.

When he arrived, he was suspected of having contracted Covid-19 and placed in solitary confinement on a quarantine ship with others. 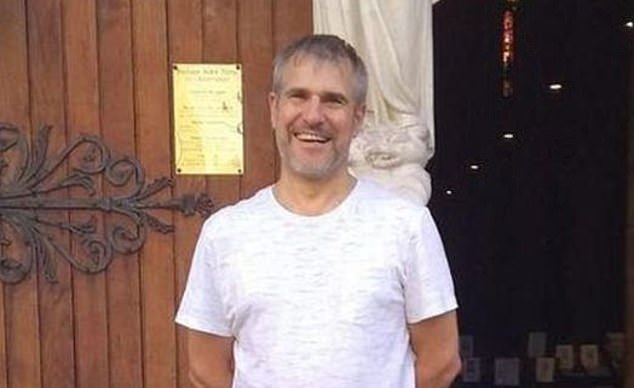 Vincent Loques, 54, a sacristan of the Notre Dame basilica in the city of Nice, was brutally killed as he prepared for the first Mass of the day after 21-year-old Tunisian Brahim Aoussaoui attacked the church 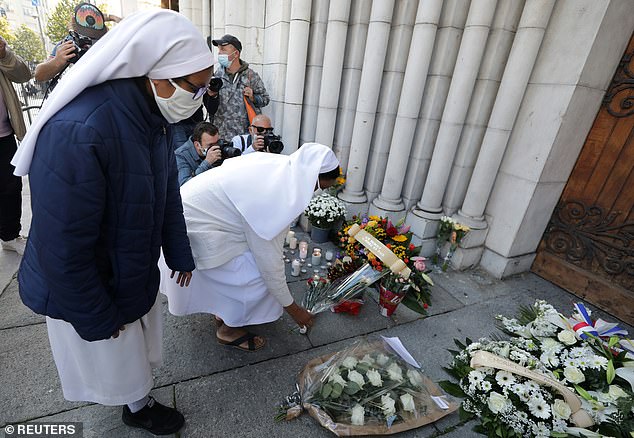 But the suspected jihadist disembarked on October 8 in the Italian port of Bari, where he should have been imprisoned and deported due to his lack of papers and ‘obvious health issues,’ the source said.

Border officials took his fingerprints and photographed him, smiling and carrying a card with the number 104 printed on it.

But when Tunisian authorities failed to confirm his identity he was released and was able to travel to Nice undetected. Italy’s interior minister Luciana Lamorgese said it was not to blame for allowing Aouissaoui to slip into France as he had not been flagged as a threat by Tunisia or the Italian intelligence service. 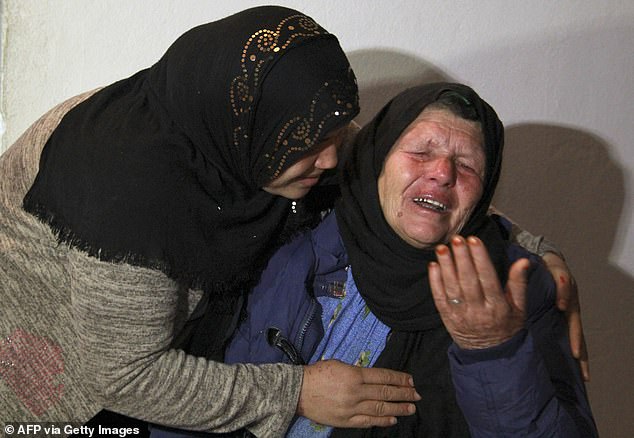 KILLER’S MOTHER: Kmar (right), the mother of Nice attacker Brahim Aouissaoui who killed three people in Thursday’s terror attack, cries at her home in Tunisia last night after being questioned by counter-terrorism police

Investigators believe he was not acting as a ‘lone wolf’ and a 47-year-old man was arrested in Nice on Thursday night on suspicion of being in contact with Aouissaoui and supplying him with a mobile phone.

The rampage came just days after Thabat, an al-Qaeda-linked press agency, called for Muslims to wage ‘jihad’ (holy war) in France over caricatures of the Prophet Mohammed in satirical magazine Charlie Hebdo.

Hardline Islamic groups across the Muslim world have reacted with fury at President Emmanuel Macron’s defence of the caricatures. Demonstrations in Pakistan’s capital Islamabad turned violent yesterday as some 2,000 people who tried to march toward the French Embassy were pushed back by police firing tear gas.