EXPRESS INFORMER > News & Politics > Mother-of-four, 35, hanged herself after scribbling ‘sorry’ on the wall

Mother-of-four, 35, hanged herself after breaking up with her boyfriend at a children’s birthday party before her traumatised son, 17, found her body, inquest hears

A mother-of-four hanged herself after breaking up with her boyfriend at a children’s birthday party, an inquest heard, leaving her traumatised son to find the body.

Katrina Fuller, 35, wrote ‘Sorry’ on the wall of her bedroom before her body was discovered by her ‘hysterical’ son, 17, who immediately video called his girlfriend.

An inquest heard Ms Fuller had become involved in a ‘heated’ argument and split up with her partner during a friend’s daughter’s birthday party – when there was an ‘incident’ on a bouncy castle.

Her partner had gone to stay at his sister’s house, the court heard, when Ms Fuller called him to say she ‘would do something stupid’ before hanging up.

The boyfriend then got in touch with the shop assistant’s son and asked him to ‘keep an eye’ on his mother, fearing she would carry out her threat.

Katrina Fuller, 35, wrote ‘Sorry’ on the wall before her body was discovered by her ‘hysterical’ son, 17, who immediately video called his girlfriend. Pictured: Ms Fuller

During the inquest, the coroner’s clerk John Halloran said: ‘Katrina’s son was hysterical. His mother had hanged herself.’

A number of family members who lived close by arrived at the home in Crawley, West Sussex as paramedics were resuscitating Ms Fuller.

The mother-of-four was rushed to hospital and immediately taken for a CT head scan as there were signs of a clinical brain injury, the assistant coroner heard.

A brain stem test was undertaken but on June 11 the ‘beautiful’ mother tragically passed away at East Surrey Hospital in Redhill.

A post-mortem examination at the hospital determined that Ms Fuller had died from a hypoxic brain injury as a result of asphyxia due to hanging.

Following her death, a family member was organising her funeral details when they found a message which said ‘Sorry’ in Ms Fuller’s bedroom.

Attending the inquest in Crawley, the family members asked whether Ms Fuller was coming down from a cocaine binge when she died as this would explain her ‘state of mind.’ 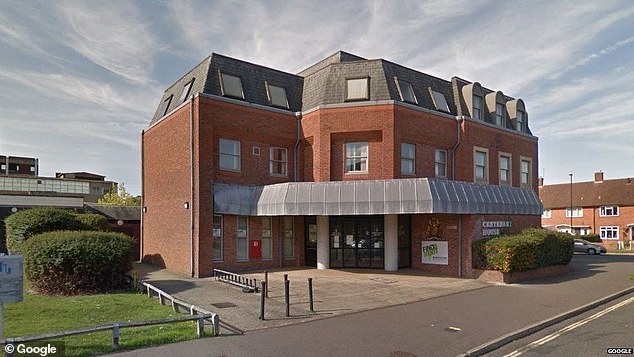 An inquest heard Ms Fuller had become involved in a ‘heated’ argument and split up with her partner during a friend’s daughter’s birthday party – when there was an ‘incident’ on a bouncy castle. Pictured: Crawley Coroner’s Court

Assistant West Sussex coroner Sarah Clarke told her ex-partner, her brother and father: ‘It is the hardest part of any inquest, that you do not get the answers to the questions that you need to have closure.

‘We know as much as we can about the circumstances. The truth is we may never have the answer to that question.’

Concluding the inquest, Ms Clarke reached a verdict of suicide, adding: ‘I am satisfied that Katrina did intend to end her own life.’

Friends and family raised £500 online for a treehouse for her two youngest children.

The tribute said: ‘On June 11 Katrina Fuller sadly passed away, she was a loving mother to four beautiful, talented and creative children.

‘She was a big sister to Grant, a step-daughter to Graham and Steve, cousin to far too many to list and good friends to many people.

‘She will be missed by so many people, she was always the life and soul of any party and lit up a room when she entered it. We all love her and will miss her deeply.

‘This is such a sad time for everyone that knew her. She was an amazing, beautiful woman.’