Jo Wood has watched CCTV footage that no mother should ever have to see.

The images, captured by a camera near the entrance of Debden Park High School in Loughton, Essex, show the final minutes of her 12-year-old son Harley’s life as he left school with a group of friends one December afternoon in 2019.

‘They were just walking home, talking about the usual stuff that teenage boys talk about,’ Jo tells The Mail on Sunday in an exclusive interview. ‘And that was it. It just happened so fast.’

She is unable to watch the footage beyond this point but she knows only too well the horror of what happened next.

Proud mum: Jo Wood with Harley, smiling in his smart uniform shortly after starting at Debden Park High School. She has watched CCTV footage that no mother should ever have to see. The images, captured by a camera near the entrance of Debden Park High School in Loughton, Essex, show the final minutes of her 12-year-old son’s life as he left school with a group of friends one December afternoon in 2019

At about 3.20pm, a silver Ford Ka driven by Terence Glover, a violent paranoid schizophrenic, deliberately mounted the pavement behind Harley and his friends and ploughed into them.

Harley, wearing a blue backpack and his school blazer, went under the car and suffered a fatal head injury.

Witnesses say Harley’s friends were ‘flung like dolls’ as Glover careered along the pavement on Willingale Road, injuring nine other children and one adult. Some were knocked unconscious but none of the other victims suffered life-changing injuries. 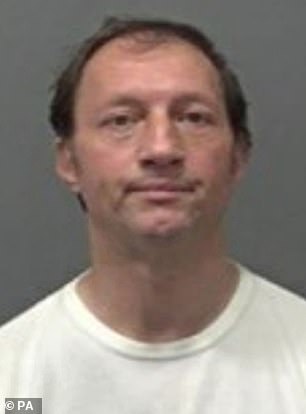 Tears stream down Jo’s face as she explains that the CCTV footage showed how Harley was initially walking on the left-hand side of the group and was the furthest away from the road.

Fatefully, about a minute before the attack, he skipped around the back of the group, placing himself next to the road – and directly in Glover’s path.

‘I don’t know why,’ she says. ‘I don’t know if his friends there were talking about something but he moves just about a minute before, so he is close to the road.

‘They didn’t stand a chance that day, they really didn’t.’

Jo, 33, was in Central London, where she works as personal assistant at the headquarters of a major bank, when another mum from the school called and told her there had been an incident involving a car.

Panic-stricken, she hailed a taxi outside her work but after getting stuck in traffic, she jumped out and sprinted for Liverpool Street Tube station to head for home.

Meanwhile, Ryan, Harley’s stepfather, and Jo’s parents rushed to the school and found a scene of carnage, as traumatised children huddled under silver survival blankets and paramedics treated Harley.

Minutes later, Jo’s friend called again with devastating news. ‘My friend said to me they are resuscitating Harley. I was screaming and crying. I didn’t know anything – I just knew he was being resuscitated.’ 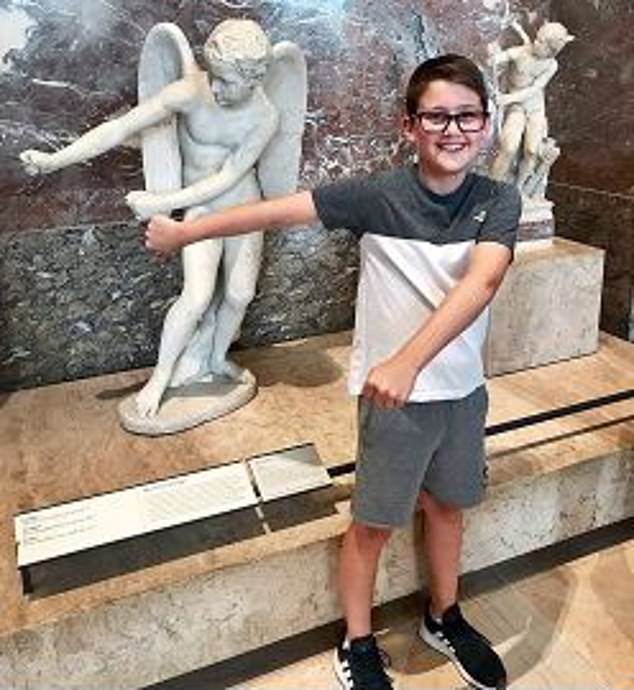 Above, Harley at the Louvre during a trip to Paris with his mother. Jo believes the NHS should be held accountable for failing to detain Glover under the Mental Health Act on five separate occasions, including just nine weeks before Harley’s death

Jo arrived at the Accident & Emergency department of Whipps Cross Hospital in Leytonstone minutes before Harley’s ambulance pulled in and she watched in horror as a large team of medics fought desperately to save his life.

‘I looked to my left and there was a woman on top of him on the bed and she was giving him chest compressions.

‘They pushed him around to where I was standing and the doctor briefly explained what he was going to do. And all of a sudden, within about a minute, he looked at a nurse and he asked what the time was and I just knew that was it. And then they just stopped. I screamed and I begged them to keep trying and they just couldn’t.’

We walked to school that day. I never imagined I would never see him again

Jo says it’s crucial people understand that Glover’s actions were deliberate and not some kind of terrible road accident.

A damning internal NHS report seen by this newspaper reveals police knew that Glover, who suffered paranoid delusions, had previously threatened to run children over in his car. Doctors, meanwhile, declined a string of opportunities to detain him in a secure hospital.

‘People mustn’t just see this as a hit-and-run,’ Jo says. ‘It’s much bigger than that. There were so many warning signs which could have prevented it happening. What we have is a very, very long build-up which could have been stopped at any time. And people knew about it. People who had the power to stop him – they knew about it.’

She believes the NHS should be held accountable for failing to detain Glover under the Mental Health Act on five separate occasions, including just nine weeks before Harley’s death.

Essex Police also have serious questions to answer, she says, including why Glover’s car was not seized from him when officers knew he had threatened to use it as a weapon.

‘They can’t do everything, I understand that. But I am not convinced that they did everything they could have to prevent this happening,’ she says.

Jo describes Harley as a ‘kind, caring, selfless, intelligent and comical young man’ who was an ‘extremely loving person’.

‘He was really funny and would make up jokes all the time. He was totally selfless as well – he would share everything.’ 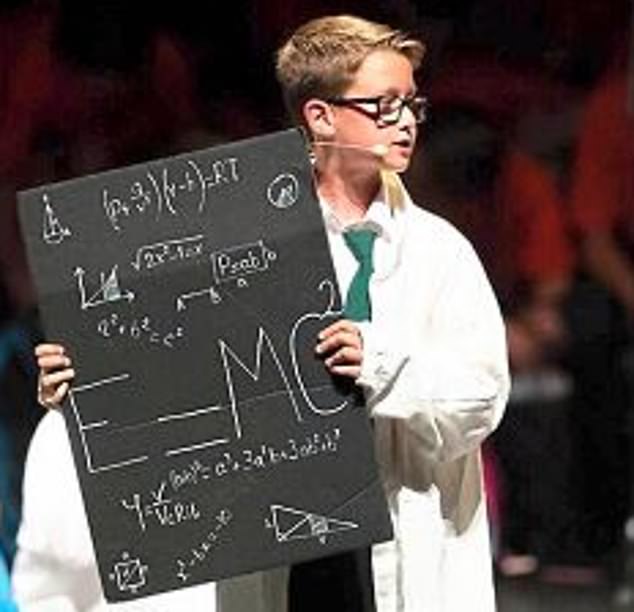 Budding actor: On stage at London’s famous Sadler’s Wells Theatre. Harley was a ‘star pupil’ at Debden Park High and was particularly good at maths. His favourite classes, however, were music, dance and drama and he dreamed of becoming an actor

He and Jo also have a five-year-old daughter. Harley and Ryan became exceptionally close, bonding over a shared love of Tottenham Hotspur and in recent years enjoying the ritual of watching Spurs play during the Christmas break.

Jo describes a ‘complete family’. Half-terms were busy with trips to theme parks or London tourist attractions, and they enjoyed a family holiday to Majorca four weeks before Harley’s death. ‘He always made friends on every holiday we went on and he always stayed in touch with them.’

Jo and Harley would also go away for what she called ‘just us two’ trips to celebrate his birthday.

In July 2019, they enjoyed a blissful weekend in Paris for his 12th birthday. ‘I wanted to do something that made him realise how special he was to me,’ she says. ‘We had such a great time there.

They have these pay-as-you-go electric scooters. We went to a big park and he could just about see over the handlebars. I remember him saying that was the best part of his trip – just scooting around together for an hour.’

Harley was a ‘star pupil’ at Debden Park High and was particularly good at maths. His favourite classes, however, were music, dance and drama and he dreamed of becoming an actor.

He had attended drama classes with performing arts organisation Theatretrain in Loughton and, to the immense pride of Jo, her mother and Ryan, performed in a show at Sadler’s Wells Theatre in London on the weekend of his tenth birthday. A picture published today for the first time shows him on stage dressed as a science teacher in the performance of Special Measures.

Jo says: ‘He was stood there at the front of the stage with everybody behind him. I just thought, ‘Wow!’ We were so proud of him. All the way home on the Tube, we were grinning and talking about it. Other passengers were talking to him because he was still wearing his costume. He was lapping it up, bless him.’

Harley was eager to learn a musical instrument and Jo and Ryan were planning to buy him a keyboard and pay for lessons last Christmas.

On the morning Harley died, Jo and her son had walked some of the way to school together. At Debden Underground station, they said goodbye.

Jo caught a train in to London, while Harley carried on to school. ‘We got to the station and I gave him a kiss and a hug and said, ‘Have a good day. Love you.’ I never imagined this would be the last time I’d see him alive.’

Jo had always given Harley strict instructions about walking home, warning him that he did not need to cross any busy roads and he should not look at his phone.

‘He did exactly what I asked him to do,’ she says. ‘He did everything by the book that day, but he didn’t stand a chance.’

The horror of what happened to her son has left Jo unable to walk along the left-hand side of a busy road. ‘I won’t walk down a road if the traffic is behind me. I will cross over. I will always walk facing the traffic. Because if you can’t see what is behind you, you are putting your trust in strangers.’

After Harley’s death, a pupil at his school launched a parliamentary petition calling for the Government to make it a legal requirement that every school has a line of bollards outside to protect children from vehicles.

Meanwhile, the leaked report seen by the MoS reveals Glover took cocaine, sleeping pills and two boxes of paracetamol before driving his car at Harley and his friends.

In November, during a 15-minute hearing at Snaresbrook Crown Court, the 52-year-old admitted manslaughter by diminished responsibility and ten counts of attempted murder.

It was the first time Jo had seen Glover, who appeared via video-link from a secure hospital.

Jo is tortured by conflicting emotions. She hates the man who killed her son but is also angry that Glover did not get the medical support he so clearly needed.

‘I despise the man for what he has done to my son and my family. But if he is as ill as everyone is telling me he is, he should have been better supported. Ultimately, if he had got better support I would still have my son. I hate him so much, I really do.’

Jo explains she has spoken out to ensure such a tragedy does not happen again.

‘I want people to understand that these things are happening and they can be prevented. It shouldn’t be just brushed under the carpet.’

She has described her overwhelming grief in a powerful personal statement prepared before Glover is sentenced on Friday.

‘It wasn’t just Harley’s life that was taken that day. I lost my life as well. Now I merely exist so that my daughter can have a childhood with both her parents.

‘I miss my boy beyond words and I would give my life for Harley to have his.’