A mother-in-law has been branded ‘abusive’ and ‘horrible’ after she body shamed her daughter-in-law by calling her fat – and then asked for all her smaller clothes.

Posting on the British parenting site Mumsnet, the unnamed woman detailed how  her mother-in-law had insulted her, and to make matters worse she received no support from her husband.

The size 12 woman explained that her mother-in-law had branded her ‘so fat’ and claimed that there’s no hope of her losing her baby weight now that her child is two-years-old, and that she should hand over her ‘really nice dresses as I will never fit into them again’.

Commenters were left outraged and said that the woman needed to set boundaries to stop her mother-in-law being abusive, while others said that her husband needs to stand up for her more.

The poster revealed that not only had her mother-in-law insulted her, she also has ‘no boundaries’ when it comes to people’s belongings

Explaining the situation, the woman said that her mother-in-law had given her some dresses when she got married, in accordance with family tradition.

‘She wants to give few of them to my sister-in-law. I politely told mother-in-law I will lose the weight it’s just I haven’t really tried. Her response was “No you won’t. You’re child is nearly two-years-old now and you’re still fat”.’

Upset, the woman spoke to her husband who said his mother was ‘right’ and there’s ‘no point keeping clothes you can’t wear anymore’.

‘My sisters think it’s hilarious of her asking and my husband is not supportive. They are my clothes after all and I feel weird giving them away as mother-in-law has decided I will never fit into them.’

An update to the post added: ‘She has zero boundaries she will have no problem opening my wardrobes.

‘She once complained she was trying to open a suitcase in my wardrobe but couldn’t as I locked it! I really hate this woman. I have over the years really tried to see the best in her. She is awful.’ 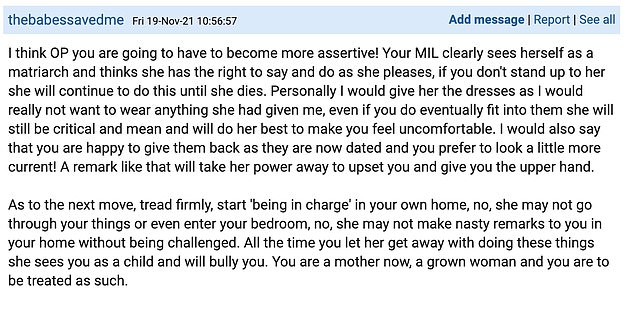 Some Mumsnetters felt the poster needed to be more assertive and put boundaries in place.

One wrote: ‘I think you are going to have to become more assertive! Your mother-in-law clearly sees herself as a matriarch and thinks she has the right to say and do as she pleases, if you don’t stand up to her she will continue to do this until she dies.

‘Personally I would give her the dresses as I would really not want to wear anything she had given me, even if you do eventually fit into them she will still be critical and mean and will do her best to make you feel uncomfortable.’

Another added: ‘People like your mother-in-law understand one language only and it’s blunt and it’s firm. Don’t lower yourself to her level but politely, firmly, tell her to mind her own f****** business. She says stuff like that because she gets away with doing so.’

And another wrote: ‘She has zero boundaries, so you need to have some.’

The mother-in-law came in for fierce criticism, with some commentators branding her behaviour ‘abusive’

The mother-in-law came in for universal criticism, with one commentator branding her ‘abusive’.

They wrote: ‘Abusive relationships aren’t always just husband and wife. The way she is treating you isn’t right. If she come into your house and STEALS your possessions I think I would call the police in all honesty. Can you get a lock for the them / your bedroom door? Your husband sounds equally awful. What’s your relationship with him like in general?’

Another agreed, writing: ‘She’s abusive and your husband is a mummy’s boy.’

A third simply said: ‘This horrible hag should not have a key to your house.’

Numerous commentators thought the poster’s husband was just as bad – if not worse – than the mother-in-law, after he failed to stick up for his wife

Other posters were more annoyed with the husband’s response.

One wrote: ‘You can easily lose the deadweight of your husband who won’t stand up for you and his MIL. If it is any help I have dropped two dress sizes much later after pregnancy than you. I am back to the size that I wore before my first baby who is now in sixth-form, and I know that I could lose more if I wanted to.’

Another added: ‘Awful way to be treated, no wonder you feel down. Why isn’t your husband standing up for you and telling his mum how her treatment is upsetting you? Personally, I wouldn’t have a family member in my home that treated me in such a way. Good luck.’

A third added: ‘Ugh mother-in-law sounds awful but I also think your husband is the one that needs to wise up and realise you won’t put up with disloyalty. It sounds awful and suspect your husband (at the moment) would support her (crazy) actions which is not good for your wellbeing.’ 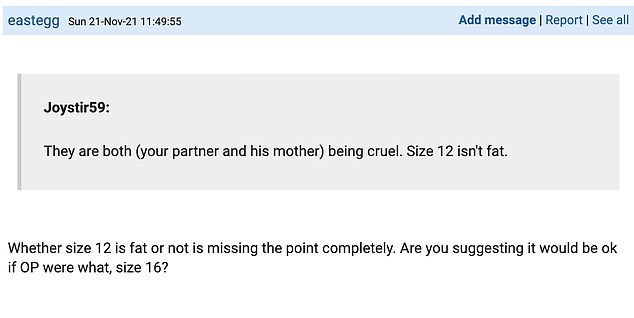