Mother reveals she can’t forgive her husband for ‘cheating’ after he sent flirty messages to a colleague when they were going through a bad patch – but do YOU agree he’s been unfaithful?

A mother who found ‘flirty messages’ on her husband’s phone to a colleague has revealed she’s struggling to forgive him for ‘cheating’, even though he doesn’t class his actions as being unfaithful.

The anonymous woman, from the UK, said the message from the female colleague ‘popped up’ on her husband’s phone after she was using it, with his permission, to sort out something for their son.

Writing on the British parenting site Mumsnet, the woman, who has an eight-year-old son, went onto explain how the texts were ‘just flirty’ and ‘nothing sexual’ at a time when the couple was going  through a difficult patch.

She added how her husband, who also admitted to being ‘flirty’ at work, has told her he ‘regrets it’ and claims it was ‘just nice to get attention’ while the couple were ‘barely talking’.

However after she ‘tried to forgive and forget’, the incident has ‘resurfaced’ and is ‘constantly’ on her mind.

Responses to the post said the messages were an indicator of cheating and proposed that her husband would not be happy if she did the same.

One wrote: ‘I guess it doesn’t really matter what you call it. What matters is if you can move on from it. Let’s call it ‘pre-cheating’. Does that make any diff in how you feel?

‘It’s still a betrayal. Whether it’s one you can move on from, it’s entirely up to you and how he works to regain your trust.’ 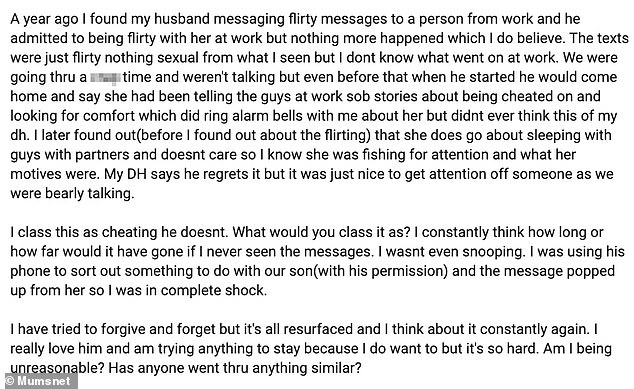 The anonymous lady, from the UK, said the message from the female colleague ‘popped up’ on her husband’s phone

Another user, who revealed how they have been through a similar situation, said: ‘I have been through similar. I’m biased here as it happened again…and again… and it was the disrespect and lying which broke my trust.

‘The problem is if he doesn’t see it as cheating, what’s to stop him doing it again?

‘Only you know him, but I’d advise making sure he knows how you feel and that he is breaking your trust by doing this.

‘If he does it again, whether it’s cheating or not, you have an incompatibility/lack of respect there which you have to decide whether you can live with. Good luck OP.’ 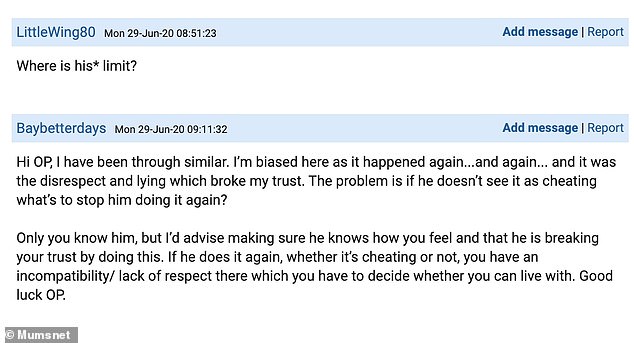 Others revealed how the husband will ‘default’ during a ‘difficult time’ to messaging another person, and asked if how he would feel if she was texting another man.

A third said: ‘Would he be happy with you messaging another man like that then? Of course not. It’s definitely cheating. Are you sure you want to stay with him?’

‘It’s cheating or a precursor to it. So when you go through a difficult time in the future that’s what he’ll do.

‘His default is not to repair the relationship with you it’s to get his kicks elsewhere,’ another added.

However one user added how they would’t end a marriage over what they deem to be ‘mild flirting.’

‘I wouldn’t say it’s cheating. It’s inappropriate but I wouldn’t end a marriage over mild flirting.’

However another argued: ‘If my darling husband needed his ego massaging from another woman he would be out the door.