A mother had to abandon attempts to get a coronavirus test after claiming staff at a walk in-centre tried to force her baby to wear a mask.

Sophie Asher, from Crewe, and her partner Matthew Kidson, visited the Chester Street site in the town on Wednesday along with their 19-month-old daughter Maya.

The 23-year-old said a member staff told her on arrival that Maya had to wear a face covering, insisting a change in the law meant all children under the age of three are required to wear one.

Sophie, a support worker, said she disputed this with the member of staff, indicating that her confirmation email said otherwise.

Later calls to 111 and 119 confirmed that children under three do not need to wear a mask.

Nonetheless, Sophie said she still attempted to put a mask on Maya which the test centre had provided so she and her partner Matthew could be tested.

But the large mask did not fit and Maya became distressed.

Sophie said: ‘We had negative tests last week but we were told symptoms can show up a week later, so we were being tested again just to make sure that before we go back to work we were still negative and all okay.

‘We’ve been through a drive-through test before and it was fine, and this was our first experience at one of the walk-in sites.’

Sophie added that the mask was not the correct size, and that they were refused entry once it became apparent that wearing the mask would not be an option.

She said: ‘It was covering her eyes and was made for an older child, not a baby.

‘If there was a new law that newborns and babies have to wear masks then surely they would have masks on site that were the right size?

‘This one was covering her entire face and he wanted us to tie it at the back because going around her ears it was still too big and didn’t loop properly. Obviously, I wasn’t going to do that.

‘It would mean me having to hold her arms down for the duration of the queue and then my partner having to hold the mask on because she was screaming, shaking her head and trying to pull it off.

‘We weren’t going to do that to her, and then we were refused entry.’

Cheshire East council says it is ‘inadvisable’ for parents to bring small children into the area if they do not require a test. 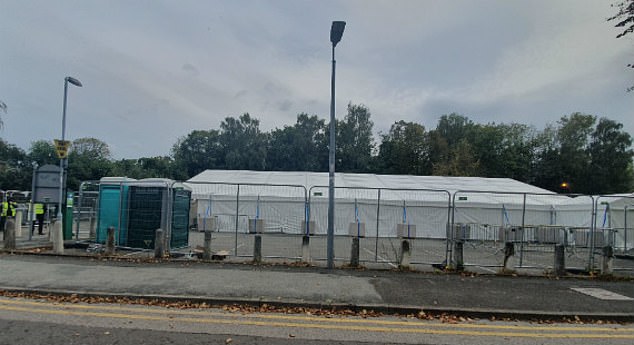 They say children should only be brought if it’s ‘completely unavoidable’ due to childcare issues.

But the council made no comment on Sophie’s claims the staff had been issuing incorrect information about the law around facemasks.

The mother added that she was concerned for other parents who might endure a similar experience and also raised concerns over the car park next to the testing centre.

She said: ‘The number of people being turned away who could have coronavirus and who aren’t being tested because of the bad experience ….the whole procedure is a shambles to be honest.

‘They even made you pay for parking in the car park opposite. So everyone is using the same ticket machine.

So there’s people there who are positive for coronavirus, touching the machine, typing the registration in to buy the ticket and then someone else is going to touch that machine.’

Matt Tyrer, Director of Public Health at Cheshire East Council said: ‘Unless it’s completely unavoidable due to childcare issues, it is inadvisable for parents to bring small children into an area that is testing people who have symptoms of Covid-19, if they do not need to be tested.’

In response to the parking concerns raised, he added: ‘There is free parking and street parking near by the centre, as well as pay and display car park adjacent to the site.

‘We advise residents to ensure they sanitise their hands before and after using any devices that will have been used by other members of the public, such as car park payment machines.’