EXPRESS INFORMER > News & Politics > Mother, 38, who planned to murder her ex-partner and his new partner goes on the run from police

Mother, 38, who planned to murder her ex-partner and threatened to ‘hunt down’ his new lover ‘like the dog she is and kill her slowly’ goes on the run from police after being released from prison

Rachel Beeton (pictured), 38, is believed to be in the Lincolnshire or West Midlands area after breaching her licence conditions

A manhunt is underway for a wanted mother who has gone on the run after vowing to murder her ex-partner and his girlfriend.

Rachel Beeton, 38, is believed to be in the Lincolnshire or West Midlands area after breaching her licence conditions.

Lincolnshire Police said she had been jailed for assault and are now urging the public for help in tracing her.

It comes after she was locked up in 2018 for trashing her ex-partner’s car and his new lover’s apartment.

While in custody, and despite being placed under a restraining order, Beeton continued to write to her former partner – before telling a friend in a letter of how she planned to kill both him and his new lover.

At a trial, prosecutor Lucky Thandi told Lincoln Crown Court that the letter was intercepted by prison staff.

She said: ‘In the letter she said she would put a knife right through her ex-partner and his new partner.

‘She detailed how she was spending her nights planning to kill her.’

She went on to say she had every intention of killing her ex’s new partner on her release from prison, the court was told.

Despite being handed a four-year jail term and a 10-year restraining order, Beeton was caught sending another death threat in 2019.

In the missive written from HMP Peterborough, Beeton wrote: ‘If it’s the last thing I do I will find your ***** and make her pay for this.

‘I will hunt her down like the dog she is and I will kill her, slowly so she knows the pain I feel without my kids.

‘She will be begging me to kill her by the time I’m finished with her. 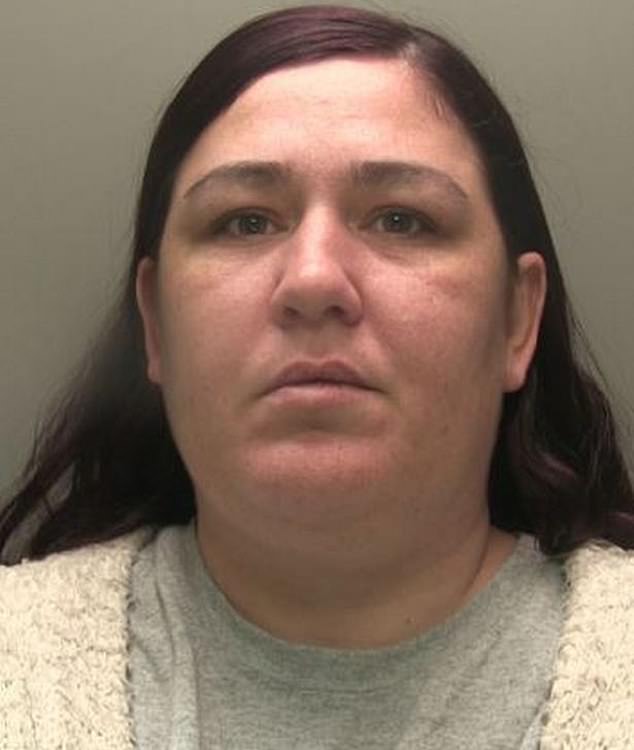 Rachel Beeton, 36, swore to exact ‘revenge’ on her former partner’s new lover by hunting her down ‘like the dog she is’ 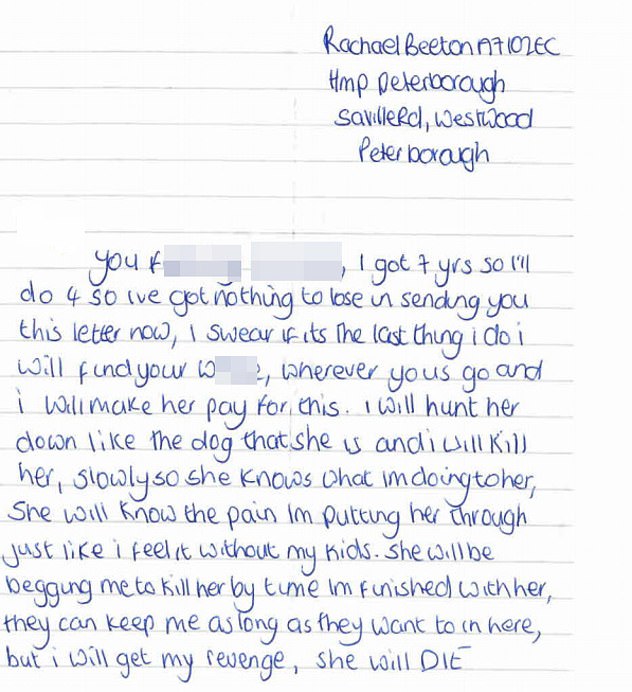 ‘They can keep me as long as they want to in here, but I will get my revenge. She will DIE.’

Prisoner officers only intercepted Beeton’s letter in the post box after a fellow inmate raised the alarm.

In her police interview, Beeton said she wrote the letter because she was ‘p***ed off’ and told officers she ‘couldn’t be a***d’ to talk to them.

Anyone who knows of her whereabouts should call Lincolnshire Police on 101, quoting incident 513 of September 9.