An obese mother-of-three who was suffering joint and back pain due to her 18st frame and hated taking her clothes off in front of her partner has shed more than 7st in just over a year after ditching sugary coffees and takeaways.

Tansy Arnett, 29, from Colchester, admitted she used to eat until she felt sick and found it difficult to keep up with her youngest son before dropping six dress sizes – and people have since likened her to Meghan Markle.

The primary school learning support assistant told how she’s now brimming with confidence after joining Slimming World and has discovered a whole new relationship with food, having yo-yo dieted for years.

She explained: ‘I tried so many diets and they all resulted in me starving myself, becoming extremely unhealthy and then regaining the weight. It had an awful impact on my relationship with food and I was very much an emotional eater.

Tansy Arnett, 29, from Colchester, pictured before, was suffering joint and back pains due to her 18st frame but has since shed more than 7st in just over a year after ditching sugary coffees and takeaways

‘At my biggest I didn’t like undressing in front of my partner and I hated looking in the mirror – I didn’t recognise the person looking back at me and felt like I was losing myself.

‘I had joint, back and neck pain, felt tired all the time and often found things uncomfortable at work, such as trying to squeeze onto the small children’s chairs.

‘I was conscious of my weight all the time, every minute of every day. The fear of seeing someone who I hadn’t seen in a while was terrifying as I would just worry about them noticing how much weight I’d put on, so I’d make a joke about it before they could say anything.

‘Now I love seeing people and they can’t get over how much weight I’ve lost. My partner loves my newfound confidence, and I can give my work 110 per cent. I feel like I have a new lease of life.’

Tansy, who has been named Slimming World’s Miss Slinky 2021, told how she has struggled with her weight for as long as she can remember and relied on fast food and sugary drinks and snacks as a comfort. 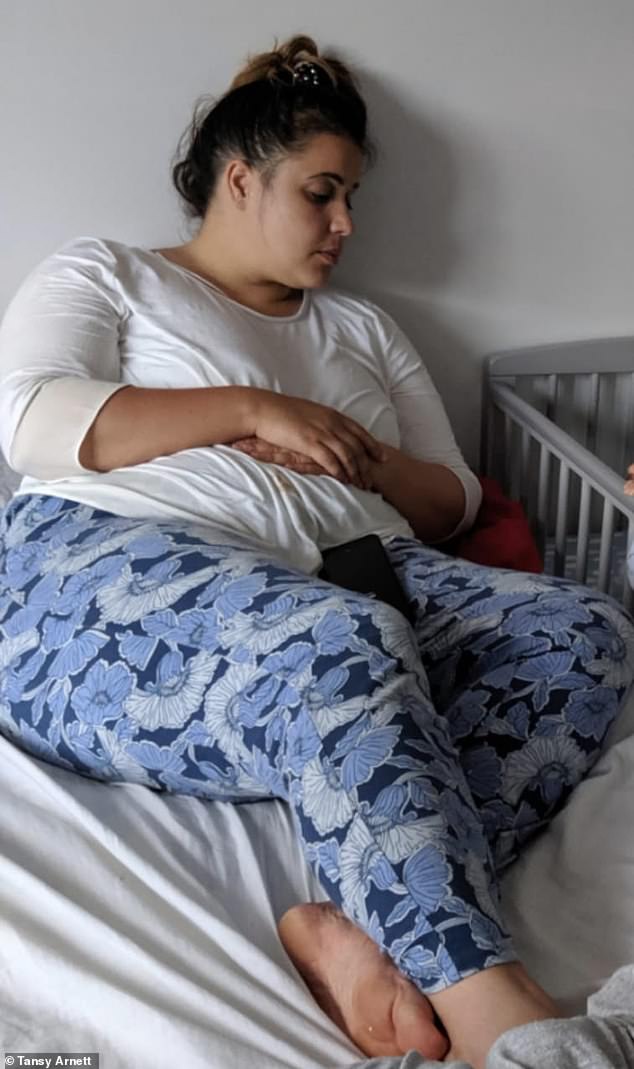 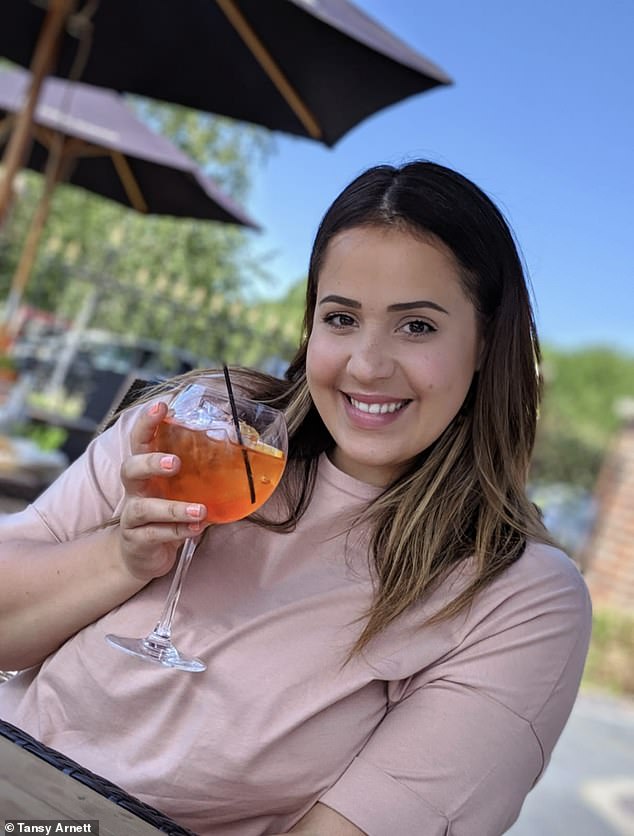 Tansy, who has been named Slimming World’s Miss Slinky 2021, told how she has struggled with her weight for as long as she can remember and relied on fast food and sugary drinks and snacks as a comfort

‘I used to fill up on rubbish, sometimes to the point of feeling sick,’ she said. ‘Now I realise that healthy eating isn’t not eating, it’s about the foods you choose and the way you prepare and cook them.’

Over the years she tried a range of different diets, with little success. Tansy said Slimming World appealed to her because she’d met several people who had lost weight and managed to keep it off.

‘One woman had maintained her weight loss for years and years,’ she explained. ‘I knew I needed something that would help me make a change for good.

‘Slimming World has helped me to break the awful habit of starving myself to lose weight, and encouraged me to eat a well-balanced and varied diet. I have completely fallen in love with cooking again and love trying new recipes.’

Tansy joined her local Highwoods Colchester Slimming World group in November 2019 with her sister Ferne, tipping the scales at 18st.

She admitted: ‘I was so nervous. I sat in that first group with a shaky, wobbly lip and my heart beating out of my chest – I had no idea what to expect.

‘Everyone was so lovely though, I was offered a drink straightaway and shown where to sit, and I was soon made to feel part of the family.

‘My consultant Vicky and the rest of the group have been what really made the difference for me. Each week – even while we’ve not been able to meet in person – we’ve come together virtually.

‘The group is like a reset button. I always come away buzzing and feeling motivated from other members’ tips or ideas, and when someone is in a hard place we all chip in to help them out – by talking things though you can really begin to work out what motivates you and what your stoppers are.

‘Everyone there knows what it’s like to struggle with your weight and how it affects your self-esteem, it’s that kindness and understanding that’s helped me to understand myself better as a slimmer and boosted my self-belief. 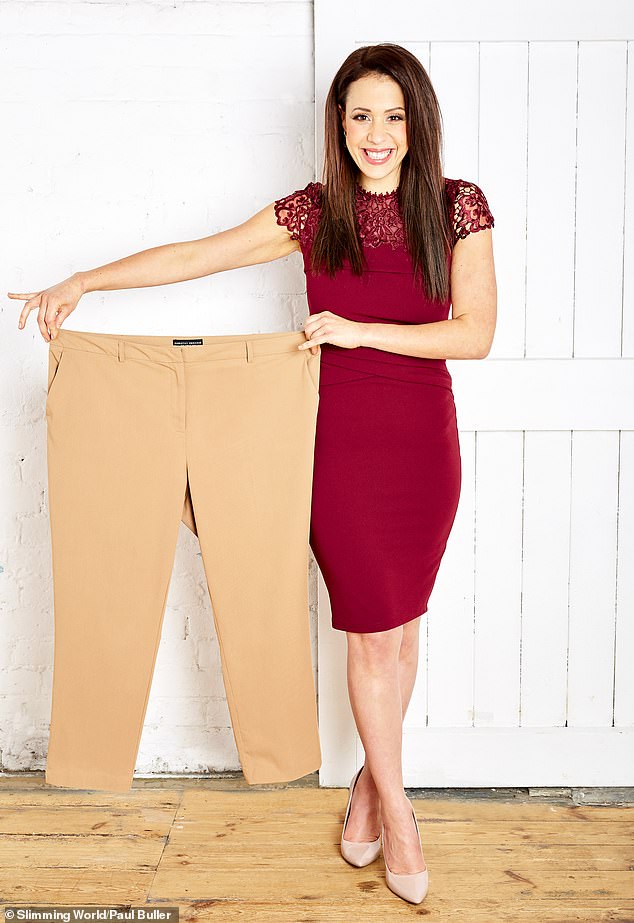 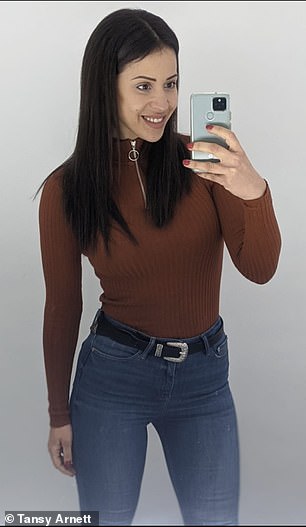 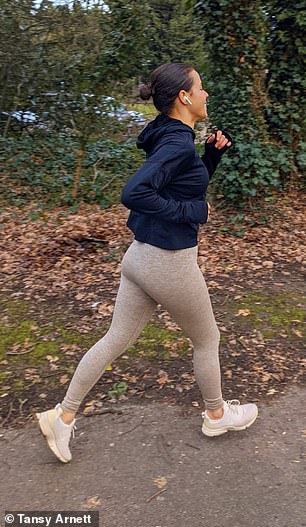 ‘It’s so sustainable I know I have everything I need to stay slim for life.’

Tansy now eats three balanced meals a day cooked from scratch, which includes lots of fruit and vegetables, and said she loves that she’s able to adjust Slimming World’s Food Optimising eating plan to suit her and her family.

‘It’s great to know we’re eating healthy meals as a family as I know that I’m setting good habits for the kids for their future,’ she added.

‘Our favourite meals are cottage pie and beef stew with vegetables. I have such a wide variety of food that I never feel restricted and I’m never hungry!’ 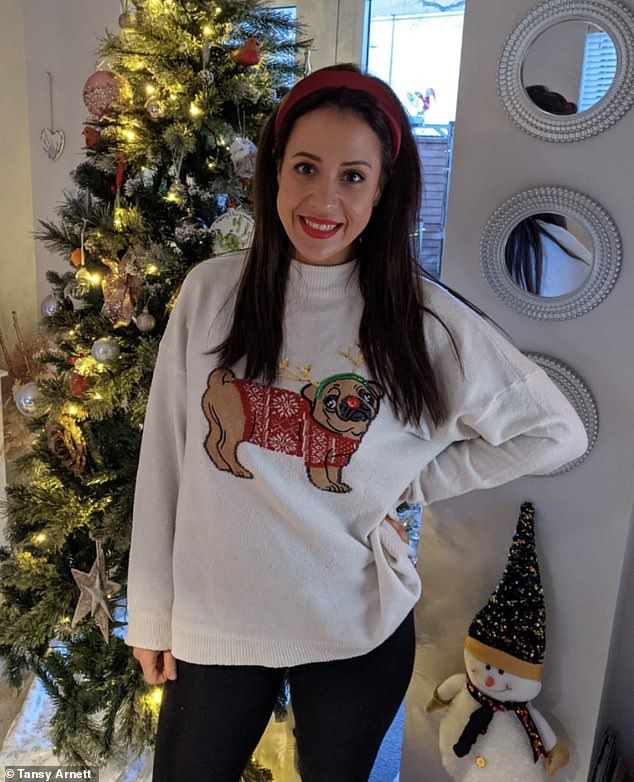 Tansy’s Slimming World group has also inspired her to become more active. She has completed Couch to 5K and loves BOUNCE, a trampoline fitness class

Breakfast: Nothing or sugary cereal

Snack: Cake or biscuits with a sugary coffee

Dinner: Large portion of something frozen and oven cooked with chips or a takeaway

Mid-morning: Piece of fruit, a coffee

Tansy’s Slimming World group has also inspired her to become more active. She has completed Couch to 5K and loves BOUNCE, a trampoline fitness class.

Best of all though, since dropping to 10st 11lbs and going from a dress size 22 to an 8/10, she’s got much more energy to run around after her two 12-year-old twin boys Charlie and Keegan and toddler Harry, two.

‘People ask if I feel like a new woman but I don’t, I feel like the person I always was on the inside. I used to feel trapped in my body but now I’m set free,’ Tansy said.

‘I never used to know what to wear, but now I love that I can showcase my personality through my clothes and don’t have to worry about wearing bright colours that attract attention – in fact, I like that!

‘Some people have even said I look a bit like Meghan Markle, which is a huge compliment!’

Tansy, who has inspired a colleague to lose 5st and her sister to lose 2st, added: ‘My advice to anyone wanting to lose weight is to go for it now, because if you don’t, then in a year’s time you’ll only wish you’d started earlier.’