EXPRESS INFORMER > News & Politics > Mother, 23, ‘feared she would die’ after eating McDonald’s chicken nugget ‘with something in it’

A mother ‘feared she would die’ while hospitalised with severe food poisoning after eating a McDonald’s chicken nugget ‘with something in it’.

Lily Denton, 23, bought the fast food from the Kirkstall branch in Leeds via a delivery service on September 13 and shared the meal with her family.

While eating one of the nuggets, she discovered a brown and red shape inside the chicken and suspected that ‘something was wrong with the food’ – so took a picture of her discovery.

Ms Denton developed diarrhoea and a sore back but hoped it was just routine food poisoning.

When her condition worsened, she was ‘carried into hospital’ by a friend. 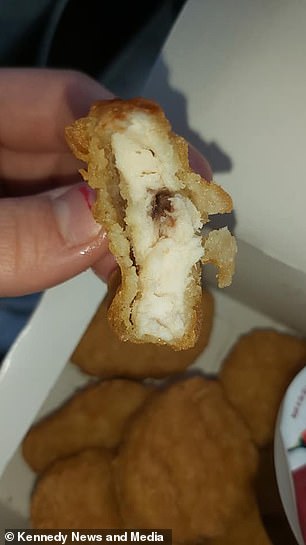 Mother Lily Denton, 23, (left) ‘feared she would die’ while hospitalised with severe food poisoning after eating a McDonald’s chicken nugget ‘with something in it’ (right)

Ms Denton, 23, (pictured) bought the fast food from the Kirkstall branch in Leeds via a delivery service on September 13 and shared the meal with her family. Right: Ms Denton with her daughter Autumn Metcalf

She claims she was hooked up on saline drips, given antibiotics and morphine to treat her intense pain, as medics desperately tried to find the cause of her illness.

After being discharged, she then received a letter from her council’s Food and Health Team to confirm she had Campylobacter in her stool – the bacteria responsible for food poisoning.

McDonald’s apologised for her experience and after reviewing photos of the nugget said they believe the shape Ms Denton found to be a blood vessel, which naturally occurs in chicken breast.

Ms Denton, from Leeds, West Yorkshire, said: ‘It was horrible. I felt I was going to die.

‘I’m still on the medication daily because it’s affected me long term now.

‘I am usually strong in myself, physically, and now I feel like I can’t walk, I can’t breathe. I can’t walk up the stairs.

‘It’s a rare case that progressed to this. Usually it’s just bog-standard food poisoning and that’s it.

‘But it’s now a month on, I’ve got breathing problems and I can’t be a full day without medication to take the pain away. 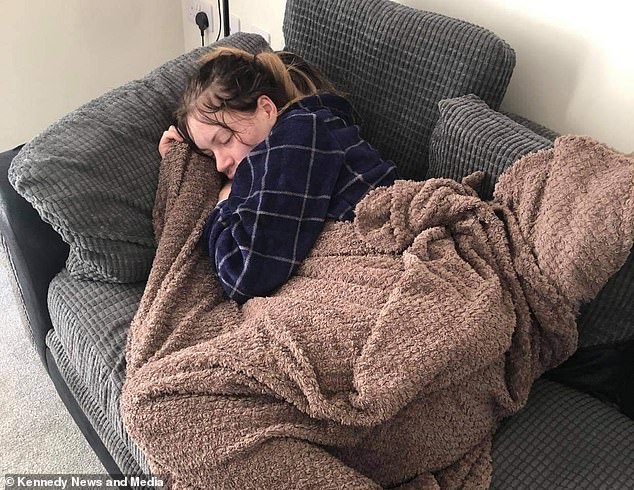 Ms Denton (pictured) claims she soon began suffering with severe stomach cramps and vomiting, while her daughter Autumn, three, also complained of a sore tummy. When her condition worsened, she was ‘carried into hospital’ by a friend

‘I feel fragile now like every gust of wind will knock me over. I’m trying to get some answers as to why this has happened.

‘I don’t want to eat anything. I’m scared.

‘I’m not eating McDonald’s anymore. No way am I going near that stuff.’

Ms Denton ordered a 20 Chicken McNuggets Sharebox on September 13 that she shared with her family, along with other items, when she discovered something inside one of the nuggets.

After eating the rest of her food, she soon began to feel nauseous and had stomach cramps.

Ms Denton said: ‘[My family] were up a bit late that night and we ended up getting food together.

‘I found a nugget with something in it so I’m guessing it was probably that.. I knew something was wrong with the food. 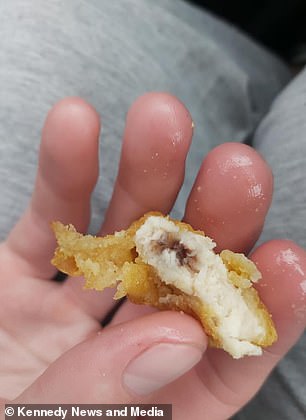 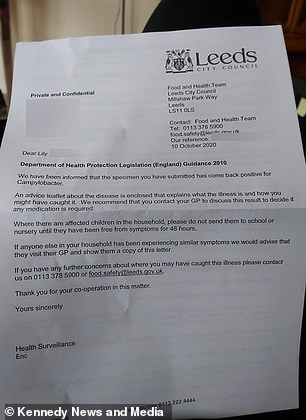 While eating one of the nuggets, she discovered a brown and red shape inside the chicken (left) and suspected that ‘something was wrong with the food’ – so took a picture of her discovery. She later received a letter from her council’s Food and Health Team (right) to confirm she had Campylobacter in her stool – the bacteria responsible for food poisoning

‘Afterwards it was just horrible. They got a bit poorly but what happened to me, it was weeks after. It’s still going now.

‘The day after I started getting cramps. I got really bad stomach cramps.

‘It was affecting all sorts – it was horrible. My daughter was telling me her tummy was hurting but I didn’t think it was anything more than a stomach bug.

‘Autumn and my partner managed to get through it but I just kept on getting worse.

‘I ended up getting really severe on my birthday. I had two drinks of alcohol and because I had infected kidneys, they’d shut down on me.

‘[The bacteria] had time to progress and work its way through my body.’

Ms Denton had struggled on for more than a fortnight as she worried about who would look after her little girl.

But when the pain became unbearable ‘like contractions’, she called a friend to take her to Leeds General Infirmary on October 5.

Shortly after, she was sent in an ambulance to St James’ University Hospital, where she was given morphine and put on a saline drip. She was also given antibiotics.

Ms Denton said: ‘That day, I only ate one meal and it was McDonald’s. [The illness] started from that day.

‘I ate the food then it was severe cramps. I thought it was mini contractions, that’s how I could explain it.

‘The pain started half an hour after and my daughter was saying her tummy hurt. I didn’t think anything of it and thought it was a bit of naff food.

‘I was being sick with vomiting and diarrhoea [after] everything I put in me for two weeks.

‘Thankfully, my boyfriend’s friend came with her little girl. She picked up me and my daughter then had to carry me into the hospital, into A&E.

‘I told the hospital “I feel like I’m getting something really severe”. I didn’t know if it was because I was due on my period and being dramatic – but I wasn’t.’

After being sent to St James’ University Hospital, Ms Denton was hooked up to a drip, given morphine for the pain and prescribed antibiotics.

She remained in hospital for two days, while doctors ruled out other illnesses such as appendicitis and kidney stones.

As she became stronger, she was discharged on Friday and a stool sample has since confirmed she had food poisoning. 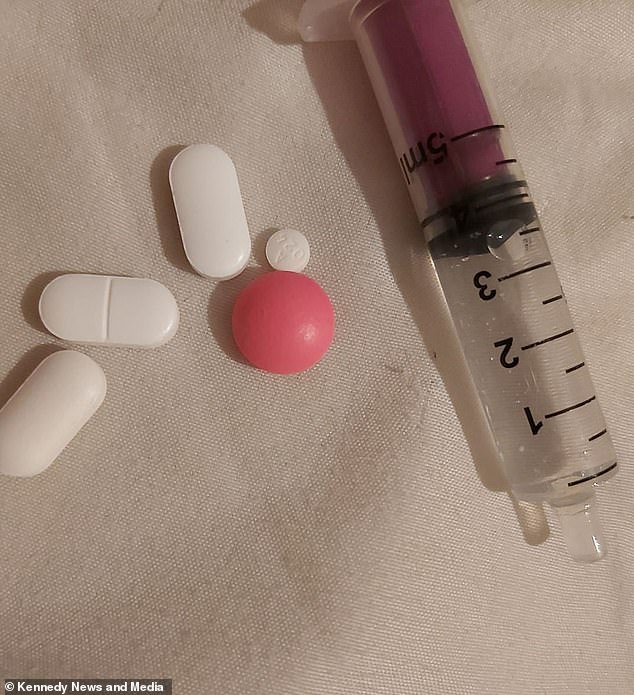 Back in the comfort of her home, Ms Denton is still on antibiotics (pictured) and is receiving treatment from her local doctor

Ms Denton added: ‘I was crying my eyes out and I didn’t understand what was going on. I’ve never had something so serious.’

Back in the comfort of her home, Ms Denton is still on antibiotics and is receiving treatment from her local doctor.

After her illness, she has started looking into life insurance after fearing she could have died, leaving little Autumn behind.

She has lost a stone since being unwell and admits she ‘feels like she’s barely living’.

Ms Denton said: ‘Now I’m still on all the medicine. It’s painful. I got discharged six days ago [Friday]. 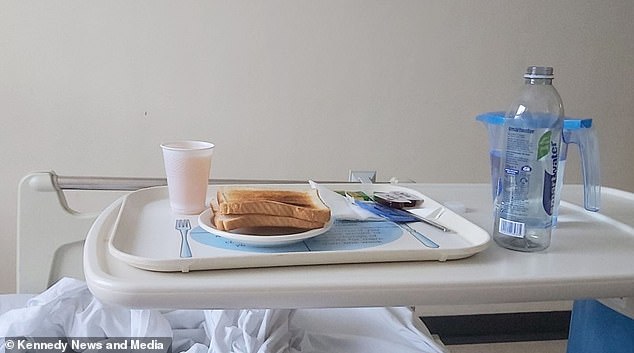 But when the pain became unbearable ‘like contractions’, she called a friend to take her to Leeds General Infirmary on October 5. Pictured: Once of Ms Denton’s meals in hospital

‘It’s made me think do I need life insurance now? Do I need to sort all that out for my daughter? Who’s going to take care of her?

‘I’m usually down for a nap [mid-afternoon]. I’m so tired. I can’t even look after my daughter at the moment.

‘There’s a chance I’ll need more medication because I don’t know what’s happening to me.

‘I’m in the middle of a house move that I can’t accomplish.

‘It’s knocked me on my a**. I’ve never been this weak and I feel like I’m barely living.

‘I’m scared I’m not even going to be around to look after my family. It’s so easy to just flick that switch and you’ll be gone.’ 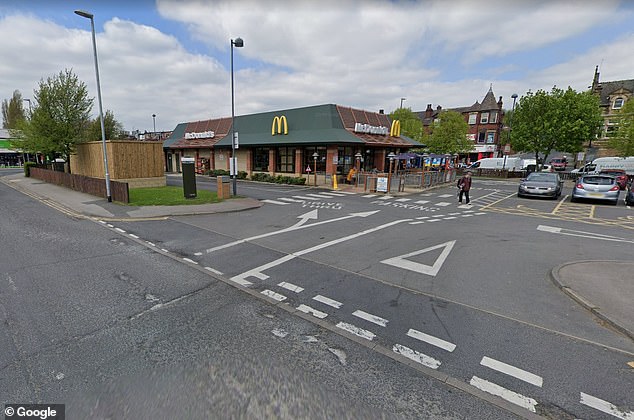 A McDonald’s spokesperson said: ‘Food safety and quality are of the utmost importance to us.

‘We place great emphasis on quality control and follow rigorous standards in order to avoid any imperfections. We are sorry to hear about this customer’s experience on this occasion.

‘As soon as we were made aware of it this week we opened an investigation at restaurant-level and have also engaged our Customer Services Team, who have confirmed that we have not had any reports of other customers having had similar experiences.

‘We would encourage the customer to respond to our Customer Services Team, who will be able to provide further support.’