The average fixed rate for a two-year fixed mortgage across all loan-to-values has climbed to 6.53 per cent, the day after new Chancellor Jeremy Hunt rowed back on much of the Government’s package of tax cuts.

The average rate for five-year fixed deals also increased to 6.36 per cent, despite dipping slightly to below 6.30 per cent at the end of last week, according to the financial information service Moneyfacts.

Separately, NatWest has just increased its mortgage rates for the second time in just over a week, pushing all of its fixed rates to over 6 per cent.

The last time the average two-year fixed rate mortgage hit 6.4 per cent or more was back in August 2008 during the fallout from the global financial crash when it reached 6.94 per cent.

Interest increase: The price of fixed rate deals has continued to climb since the end of last year, but this has accelerated since the Government’s mini-Budget

Hunt’s announcements, including stopping the £2,500 average energy bill cap in April, were made in an effort to appease the markets following the sell-off of gilts – Government debt – and rising cost of borrowing.

This is being passed on through lenders to homeowners via increasing mortgage rates.

The hikes will cost borrowers thousands more a year to pay for their homes. The average rate for a two-year fixed deal across all deposit sizes has increased 1.79 per cent from the day of the mini-Budget until now, according to Moneyfacts.

Why are mortgage rates still rising?

Today’s rates seem to show that the impact of the U-turns has not yet filtered down into the mortgage market.

This is despite brokers suggesting that the cost of borrowing for banks and building societies is already becoming cheaper.

It may be that lenders are struggling to cope with the level of customer queries they are getting due to the market uncertainty, and not wanting to increase pressure on their services by dropping rates and becoming the cheapest in the market.

Chris Sykes, technical director at broker Private Finance, said: ‘Since Kwasi was fired last week institutional lending rates have reduced so it will come as a surprise to some that mortgage providers in some cases are still increasing rates.

‘From speaking with lenders this is not necessarily due to political uncertainty or the cost of funding any more. Service levels are currently being extended and they want to stem demand by increasing rates above their competitors.’

The Moneyfacts rates are averages, and not the cheapest deals on the market. These can be seen below.

What are NatWest’s rates now?

After already pushing up its rates on 10 October, NatWest has now pulled some of those products and revealed a new slew of mortgages that went live today.

The bank’s cheapest rate, a five-year fixed deal which is only available to existing customers with a 40 per cent deposit, has jumped 0.8 per cent from 5.24 per cent to 6.04 per cent. 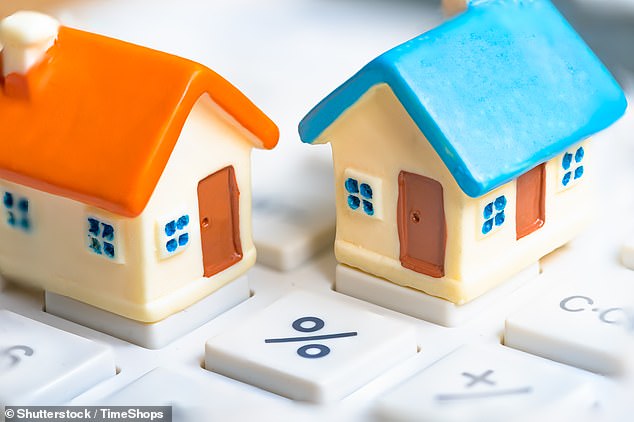 Calmer? Some brokers say the speed of mortgage rate change could begin to slow soon

It means those that locked in a deal with NatWest just a week ago will have saved £49 a month or £588 a year.

Where will rates go next?

With the economic backdrop changing quickly, it is difficult to tell. However, some brokers are predicting that things could become a little calmer in the coming weeks – at least when it comes to mortgage rate changes.

The next Bank of England base rate rise is already priced in, and this may delay any further changes from lenders

Craig Fish, founder and director at Lodestone Mortgages & Protection, said: ‘In the short term, I’m not really expecting to see much change, despite a couple of lenders increasing their rates in recent days.

‘I think the next Bank of England base rate rise is already priced in, and this may delay any further changes from lenders.’

The Bank’s next meeting to decide whether to increase the base rate will happen on 3 November.

Barclays has also come out with new products rates, with its five-year fixed rate mortgage on a 40 per cent deposit at 6 per cent for new business.

It also has a seven-year fix at 6 per cent for existing customers with a 40 per cent deposit transferring onto a new deal.