Rates on the cheapest two-year fixed mortgage rates have more than tripled since October last year, according to analysis by mortgage broker L&C Mortgages.

A typical new, £150,000 repayment mortgage from a basket of best buy deals now costs almost £130 a month more than it did eight months ago, an increase of more than £1,500 per year.

L&C’s analysis focused on the cheapest two-year and five-year fixed deals offered by the top 10 lenders.

The cheapest typical two-year deal has climbed by 0.35 percentage points over the past month alone, and now charges 2.71 per cent, having risen from the historic low of 0.89 per cent last October.

Rate hike: Two year fixed mortgage rates have increased sharply from the historic lows of last October when the cheapest typical rate was just 0.89 per cent.

The average cheapest five year fixed deals also rose month-on-month by 0.32 percentage points from 2.46 per cent to 2.78 per cent, up from a low of 1.05 per cent back in October.

The rapid rise in the Bank of England base rate rom 0.1 per cent in December last year to 1 per cent today has driven up the cost of mortgages, as lenders pass on higher funding costs and compete less on price.

The Bank’s monetary policy committee is widely expected to raise rates again on Thursday to 1.25 per cent.

The quick-fire base rate rises have also been feeding through to lenders’ standard variable rates. These are the higher variable rates that borrowers fall onto once their initial deal is up.

The average standard variable rate amongst the top 10 lenders has risen from 3.82 per cent in October to 4.51 per cent as of this month.

David Hollingworth, associate director at L&C Mortgages said: ‘The rate at which mortgage rates have been moving has been astonishing and many lenders have continued to make changes to their rates week in week out, making it difficult for borrowers to keep tabs on the market.

‘With the cost of living continuing to rise, mortgage borrowers will be hoping that the Bank of England will decide to ease off but it makes sense to plan for more increases.

‘It’s hard to predict where they could top out but I can see the 3 per cent barrier being breached in coming weeks if it carries on like this and it may not stop there.

‘There’s nothing to suggest a slowdown in that movement and market rates continue to put upward pressure on lender pricing, which could see this become an ongoing trend unless the backdrop changes and inflationary pressure eases.’

What can you do if you need to remortgage?

Whilst the rising cost of living is impossible to avoid at the moment, a mortgage remains an area where households can at least take some positive action.

Any homeowners approaching the end of their existing fixed deal, can lock in a new mortgage offer up to six months before their current deal ends.

This will effectively lock in the new rate in advance of the new deal starting. This is because a lender’s offer typically valid for between three and six months.

Many homeowners will likely also fix for longer to avoid being stung in two years time if rates continue to rise in the short run.

The extra cost involved in doing so is very slight. According to L&C’s analysis, the difference between the cheapest two-year and five-year fixed deals is a mere 0.07 percentage points.

Another option for those who feel they may struggle to absorb the higher monthly costs is to lengthen the mortgage term.

By lengthening a mortgage term, a borrower spreads repayments over a longer period of time and reduces monthly costs.

However, while taking out a longer mortgage term will reduce the monthly costs, it will ultimately mean paying interest for a longer period of time and therefore paying more in the long run.

Finally, for borrowers who have savings built up they could consider either overpaying or switching to an offset mortgage. 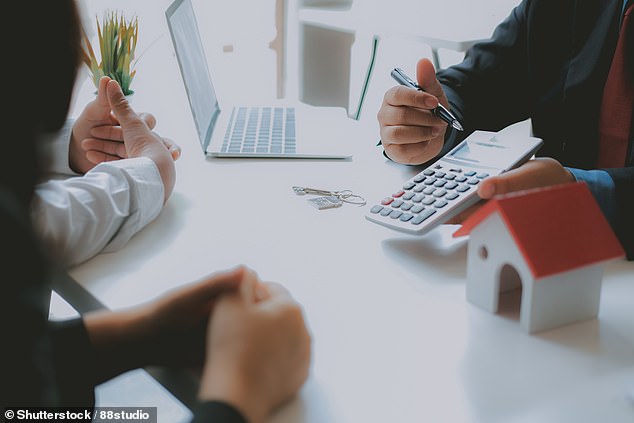 Higher or lower: By shortening or lengthening the mortgage term you alter your monthly repayments. This could save you money in the short term but cost you more in the long run

The majority of fixed-rate mortgage deals allow borrowers to make overpayments amounting to 10 per cent of the total outstanding amount each year without incurring early repayment charges. Some are more flexible whilst others may be more restrictive.

This could perhaps appeal to someone with their remortgage due next year who wishes to reduce their debt before they are hit with a rate hike.