An e-bike that was engulfed in flames on a busy Manhattan street earlier this month is one of at least 166 lithium-ion fires reported so far this year across New York City – and four of them happened over the course of just 24 hours.

The New York City Fire Department (FDNY) was called to the group of lithium-ion battery fires in April and shortly after issued a warning to riders that urges them to stop using an overheating battery immediately and follow the manufacture’s instructions for charging and storing.

The FDNY told DailyMail.com that these lithium-ion fires have also killed two people and left 61 injured.

Mike Mike Fritz, co-founder of Human Powered Solutions, a bicycle consulting firm, said New York City has become the epicenter of e-bike fires and it is due to the a massive influx of delivery personnel using the battery-powered cycles to zip from one drop off to the next.

Because many are of low-income status, they are unable to afford a new $900 battery or purchases one from third-party sites that are pushing out defective cells and battery management systems that are vital to regulating the function of the battery pack and temperature.

‘A cheap pack is a prominent incident and is the cause of most of the fires,’ Fritz told DailyMail.com. 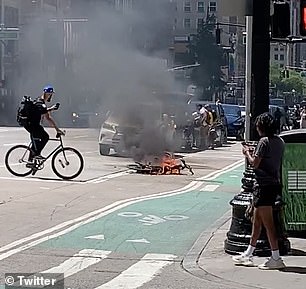 New York City has seen more than 100 fires started by e-bikes this year. This is due to damaged or faulty batteries. This incident was captured earlier this month

E-bikes are the go-to vehicle for delivery workers because it provides them with an added push that does not require them to exert themselves while peddling.

This is obtained through an electrical component on the cycle, which is in turn powered by a lithium-ion battery.

A battery is made up of an anode, cathode, separator, electrolyte and two current collectors – a positive and negative.

The lithium is stored in both the anode and cathode. 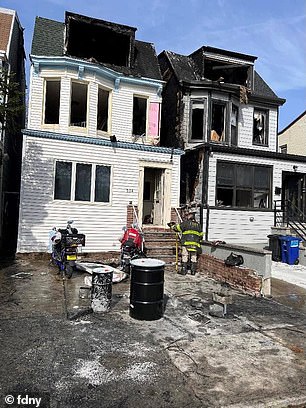 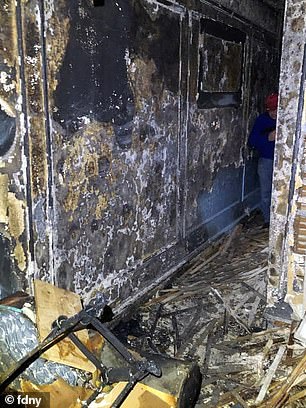 The FDNY issued a a warning recently, after it battled four fires in just 24 hours. 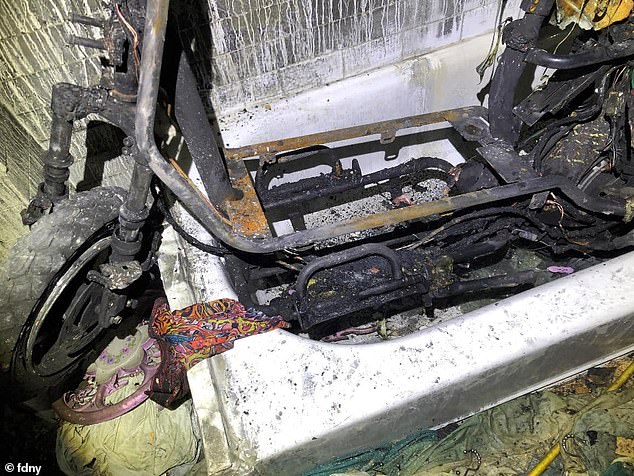 The electrolyte carries positively charged lithium ions from the anode to the cathode and vice versa through the separator.

However, when the separator is compromised heat builds up and boils the electrolytes.

Pressure then builds up in the cylinders and when it cannot take anymore, electrolytes leave out in a gas that combusts as soon as it hits the air.

Fritz explains that it is a slow burning fire that quickly turns into a giant blaze.

The fires are not just happening with e-bikes on the go, but are becoming a major problem for those plugged into New York City homes and apartments. 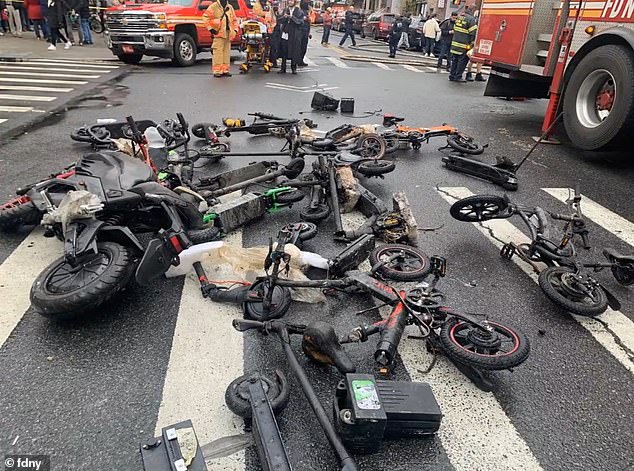 The dramatic uptick in e-bike fires is due to a massive influx of delivery personnel using the battery-powered cycles to zip from one drop off to the next. Pictured are a group of charred e-bikes laying on a Brooklyn street. The fire happened in May of this year

The four April fires were reported in Manhattan, with one of the blazes in Brooklyn.

A total of 12 people were injured in the four fires combined.

The FDNY shared another image on its Instagram page showing a group of charred e-bikes and e-scooters that were part of a 3-alarm fire at 5401 7th Avenue in Brooklyn in May.

‘It is impossible to put out a lithium fire,’ said Fritz. ‘You need to interrupt the cell to cell propagation or just let it run out of fuel.’

‘One of precaution is never charge a battery unattended, don’t plug it in and walk away. If a failure occurs you have time to intervene.’

Fritz, who is an advocate for e-bikes, hopes these incidents are not deterring the public from owning an e-bike.

‘This is a serious issue and awareness is the best short term solution,’ he said.

‘There are technical solutions on the horizon, but until they’re here, we have to raise awareness.’