Sunseekers eager to bask in sunshine on Britain’s beaches this weekend were in for a shock today after temperatures plummeted and torrential downpours hit much of the nation.

In what marked a disappointing end to a sweltering week, dozens of revellers were caught out in the pouring rain in Manchester.

Some decided to brave the weather and headed to beaches in Brighton and Bournemouth – but the sparsely-populated coastline was a stark contrast to the packed scenes seen yesterday.

Temperatures soared to 92F yesterday, marking the hottest day of the year so far, bringing out swathes of eager revellers to the great outdoors.

But they were in for a shock later that evening as Britain was struck by dramatic thunderstorms overnight.

The weather will remain disappointing for much of this weekend with the Met office dubbing it ‘much cooler’ with significant rainfall in the north.

This evening is set to bring sporadic showers to much of the nation with significant wind in the south.

Sunday’s weather will also be cold, wet and windy in parts of northwest England, south and west Scotland and Northern Ireland.

Next week also looks to be equally drab with rain remaining persistent in the north through to the Midlands on Monday.

More mountains of rubbish have piled up on Britain’s beaches after hundreds of thousands of sun seekers flocked to the coast this week – with some visitors claiming ‘no one else seems to care’ about social distancing.

Bins at tourist hotspots across England overflowed due to the overwhelming number of people who flooded to the sea as a heatwave sent temperatures soaring above 90F.

The Prime Minster warned of a ‘serious spike’ in coronavirus infections in the UK if people did not follow social distancing guidance.

Although seasides were not as busy yesterday, the mess left behind after the sudden influx left many locals disgusted. 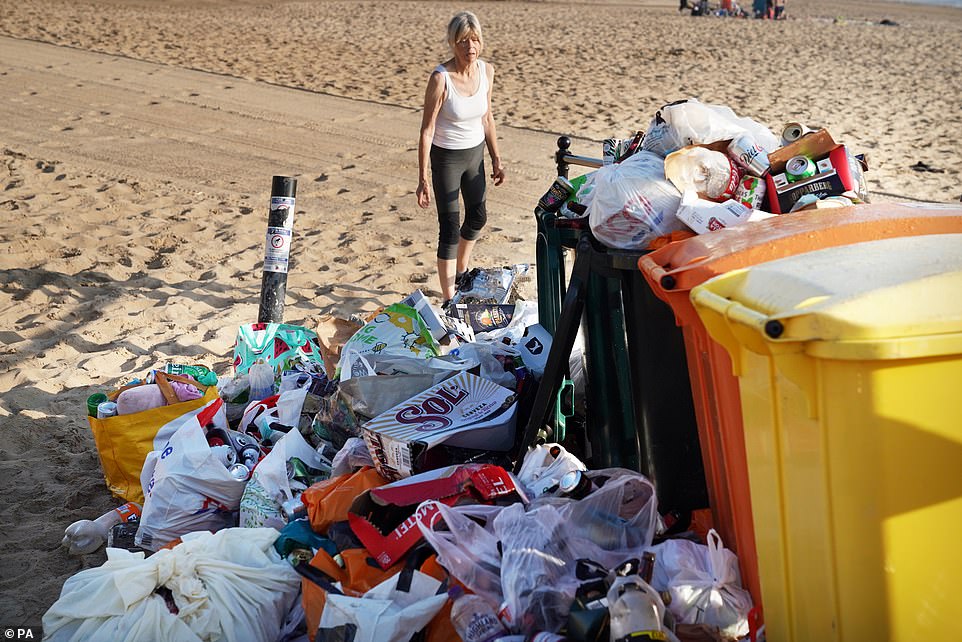 Bins overflowed in Tynemouth, in the north east of England, and locals were forced to take to the beach yesterday to collect the rubbish left behind

Speaking yesterday to Sky News, two women from Bournemouth said they, and their friends, were trying to be careful and maintain a safe distance but struggled because ‘no one else seems to care’.

The locals said they go to the beach all the time but described the scene as ‘a bit mad’ as hundreds of people turned up to the coast.

Another woman said she did not believe social distancing was taking place on the beach and two others said they would not ‘come back any time soon’ because it was so busy.

A major incident was declared in the town on Thursday as 500,000 visitors overwhelmed Dorset, with the authorities activating an ’emergency response’ after they clogged up roads and dumped tons of litter.

Coastal beauty spots around the country also saw drunken fights amid blatant flouting of two-metre social distancing rules by crowds of young revellers despite Britain still being in lockdown to fight the spread of Covid-19. 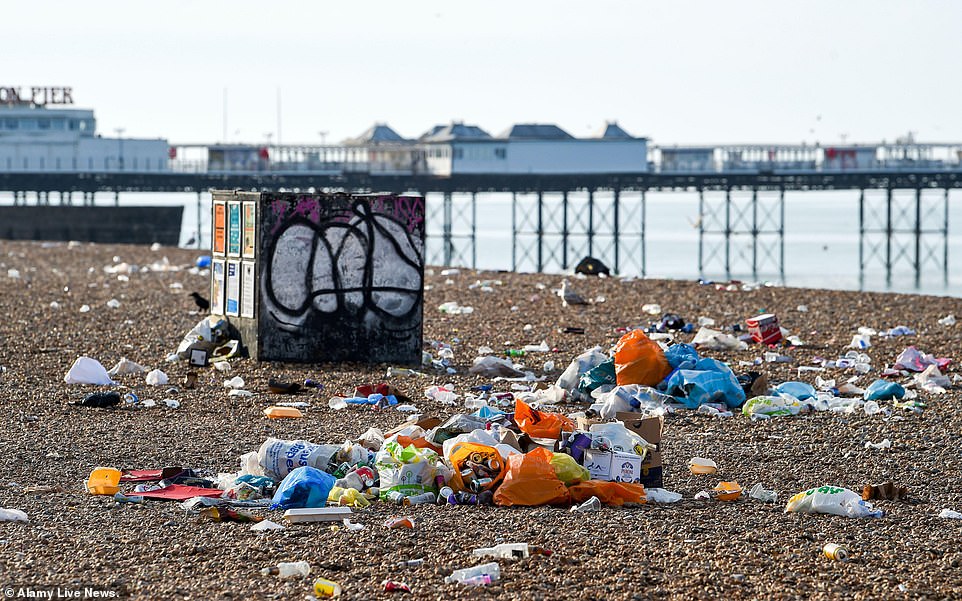 There are fears over a resurgence of coronavirus as the heatwave triggered a frenzied rush to the seaside.

In a bid to cut down on the volume of visitors, Health Secretary Matt Hancock warned the government had the power to shut beaches if the chaos continued.

Chief medical officer Chris Whitty gave a similar message on Twitter: ‘COVID-19 has gone down due to the efforts of everyone but is still in general circulation.

‘If we do not follow social distancing guidance then cases will rise again. 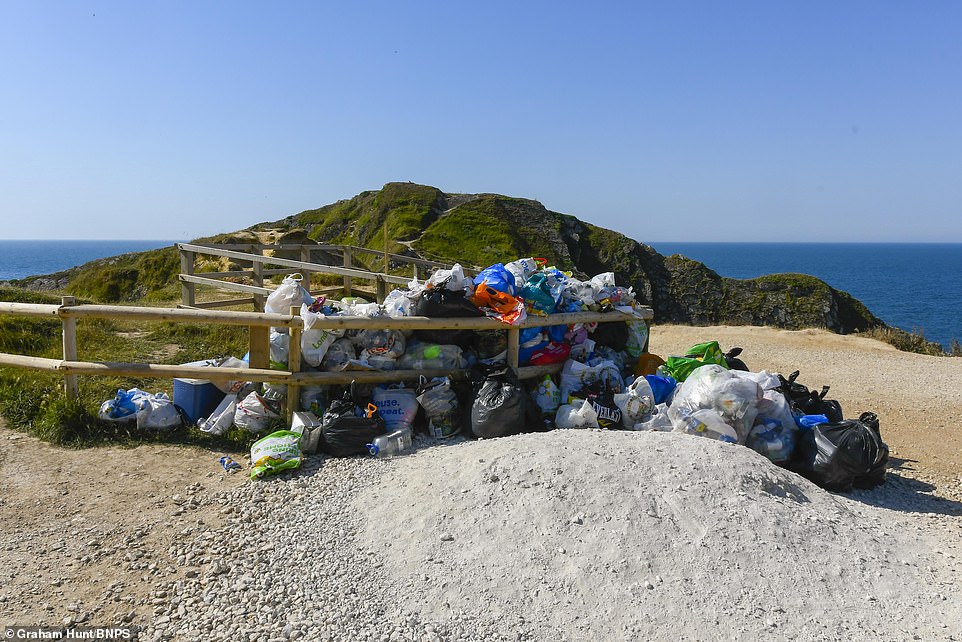 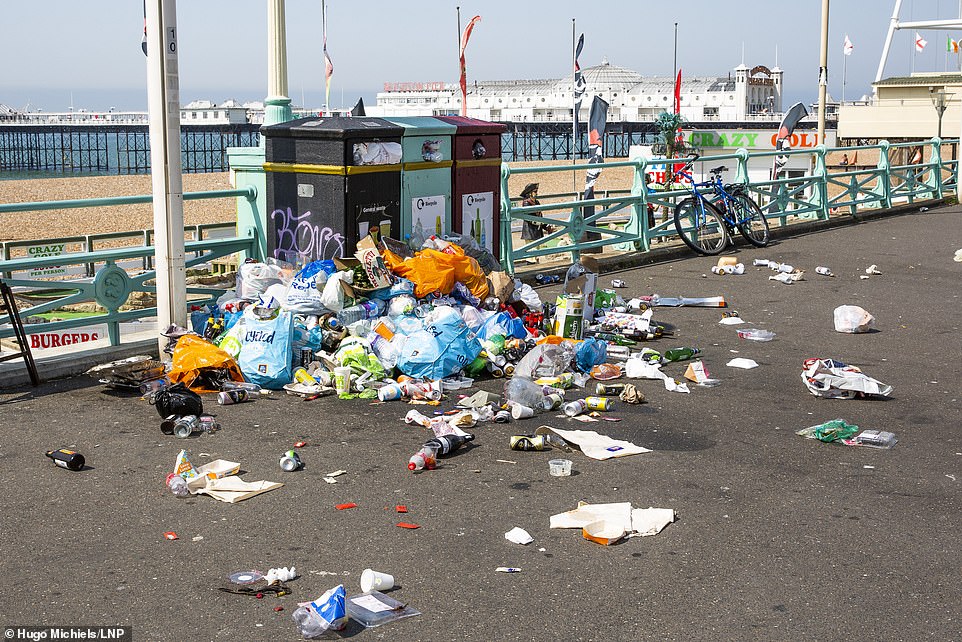 Council workers were out in force in Brighton, working all morning in a clean up operation to collection all the rubbish which was left on Thursday

‘Naturally people will want to enjoy the sun but we need to do so in a way that is safe for all.

In Bournemouth, residents have spoken about the ‘mayhem’ as tens of thousands of sun-worshippers descended on Bournemouth beach ‘with no idea of social distancing’.

Local resident Pat Munday, 73, described how cars were double-parking and blocking driveways, preventing emergency vehicles from getting through, while people were using the gardens of her apartment block as a toilet on Wednesday and Thursday.

She said: ‘It was just mayhem, people just want to have a good time but they just don’t give a monkey’s about others. It’s a shame, it’s such a beautiful part of the country but people just need some control, people have lost all sense of respect – when they urinate in your garden, it’s the pits.’

Vic Williams, 75, said: ‘There was no idea of social distancing, when we left at 2pm the crowds were still arriving, there wasn’t any two metres. Because the restaurants are closed, there’s nowhere else for people to go.’ 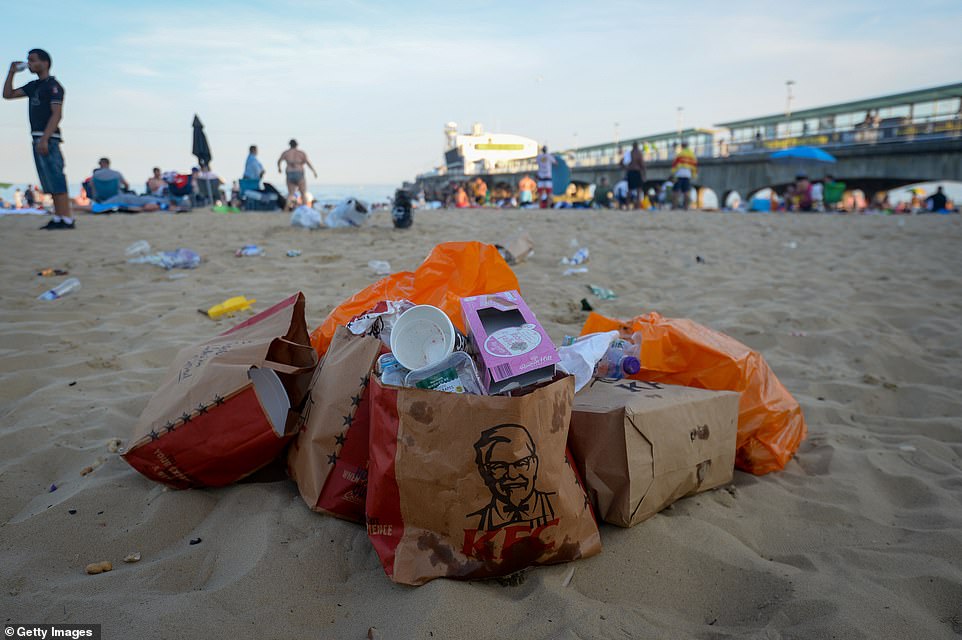 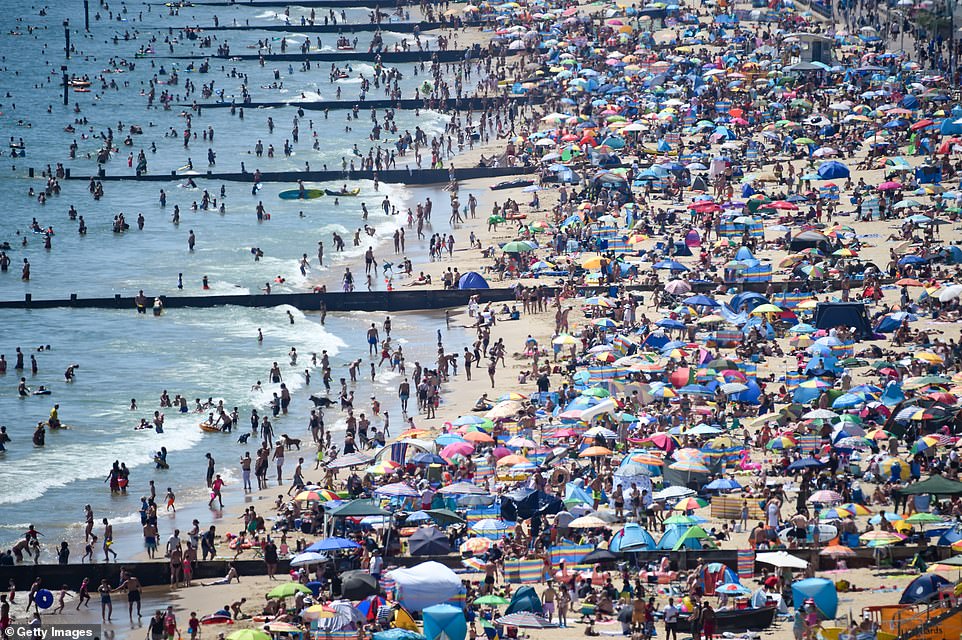 A major incident was declared in Bournemouth on Thursday as 500,000 people flocked to the coastal hotspot

Mr Williams said the council’s tractors had been out in the early hours clearing up the tonnes of rubbish left.

He added: ‘The litter afterwards was unbelievable, they just walk away from the beach and leave their rubbish, there were tents left, BBQs, it costs us ratepayers a fortune.’

A senior lifeguard said there was an ‘excessive’ number of people during the hottest days, and added: ‘Bournemouth has a reputation as one of the best beaches in Europe … but it’s important we work together so everyone can feel safe.’

Jessa Bane, 18, and a group of friends travelled down from the Reading area to enjoy the beach after finishing college. She said: ‘We have created our own social bubble by drawing a line in the sand around us to make sure we can social distance.’ 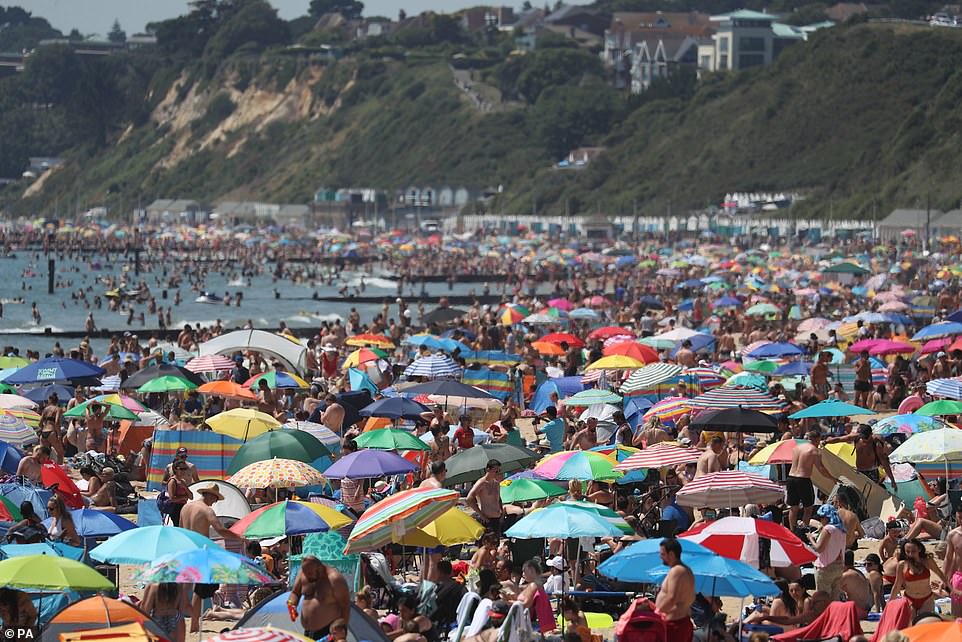 Asked about the situation on beaches, a Downing Street spokesman told a Westminster briefing: ‘Everyone should be able to enjoy the sunshine, and we understand that people want to enjoy public spaces, but it is important we don’t undo the hard work of the British public in reducing the transmission of this virus.

‘It is a matter for local authorities to manage numbers, alongside emergency services and Public Health England.

‘They are best placed to make those decisions on a case-by-case basis. We have been clear that should we see case numbers increase we will introduce local lockdowns.’