Shoppers ignored repeated warnings to stay home as part of ongoing efforts to clamp down on coronavirus by heading to DIY stores.

Latest figures collected on Friday showed that driving is up 4 per cent and walking has increased 5 per cent among Britons compared to last week.

And there were signs that many were continuing to flout lockdown rules ordering them to stay home for all but essential reasons as hundreds of shoppers were pictured in snaking queues at B&Q and The Range hardware stores.

The shoppers were taking advantage of hot an dry conditions which has brought sunshine around the country this weekend, although wet weather is on the way. 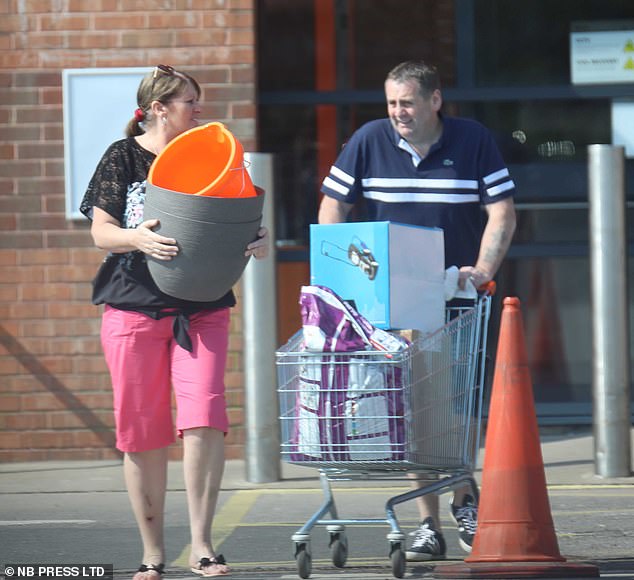 Shoppers were pictured carrying items including plant pots, buckets and even a lawn mower at one B&Q store in Swansea

People looking to do home improvements were seen waiting in lengthy queues outside B&Q in Swansea and York.

Some pushed trolleys filled with rolls of carpet while others were seen lifting enormous products into their cars.

And in Derby at The Range, which sells essentials including food and toilet roll, as well as DIY items such as paint and furniture, shoppers were taking advantage of the lack of crowds.

Data from Apple Maps also showed that traffic congestion has surged from the start of the month and since the lockdown was announced.

Walking in London has picked up markedly in the last three days alone, according to Apple Map’s most recent ‘Covid-19 mobility trends’ data. 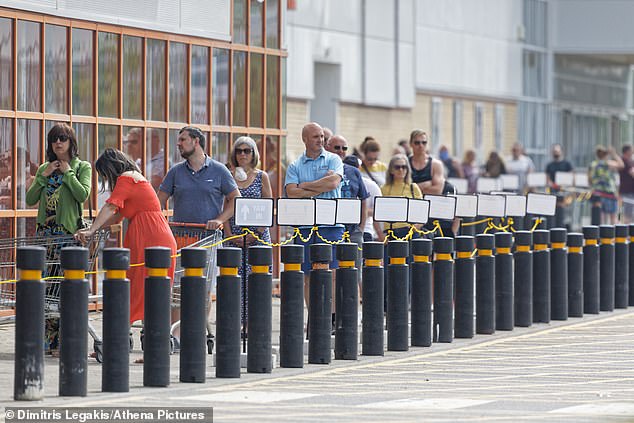 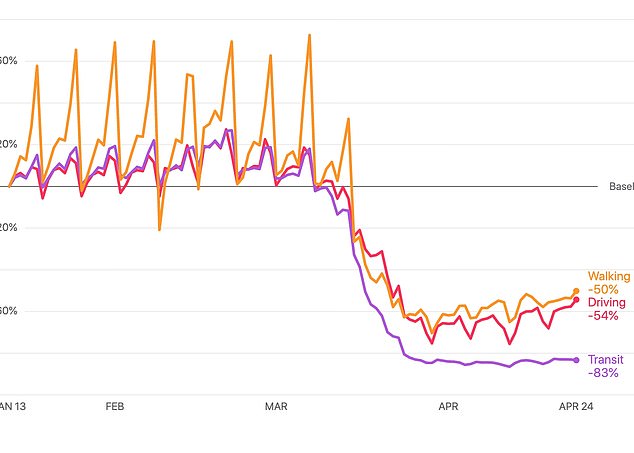 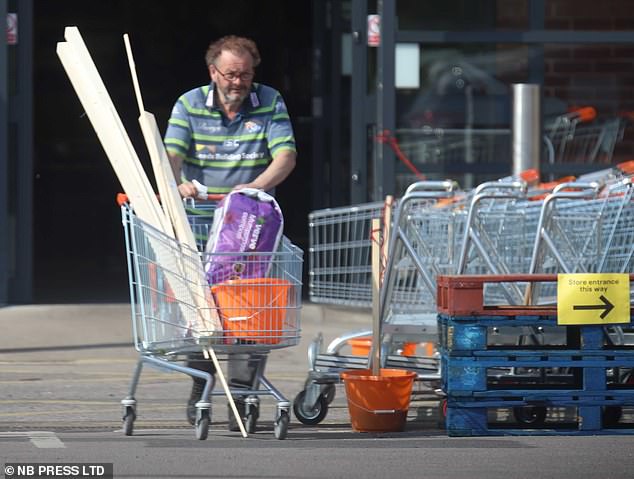 Some pushed trolleys filled with rolls of carpet while others were seen lifting enormous products into their cars. Pictured: One shopper at B&Q in York

It appears there has been a sharp increase in human traffic as the number of people walking across the country rose by around 8 percentage points on April 23 from last Saturday.

The number of people walking, driving, and using public transport networks in the UK took a nosedive in early March, as concern about the spreading coronavirus outside of China – believed to be the country of its origin – intensified and gripped the nation. It plummeted on March 24 – the day after Boris Johnson declared a ‘stay-at-home’ order.

But newly released figures available on Apple Maps indicated the British public are growing restless of life under lockdown as many more take to the roads and the streets. 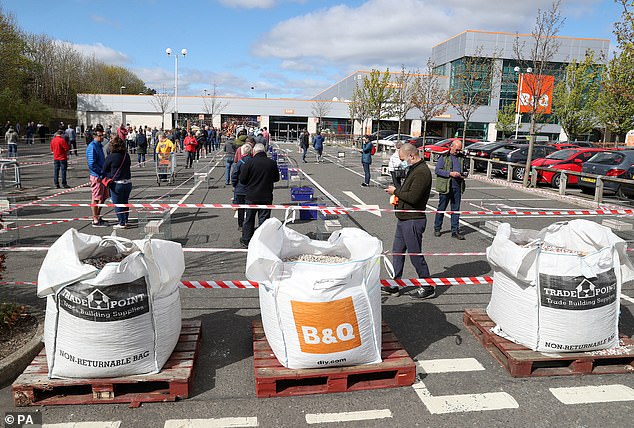 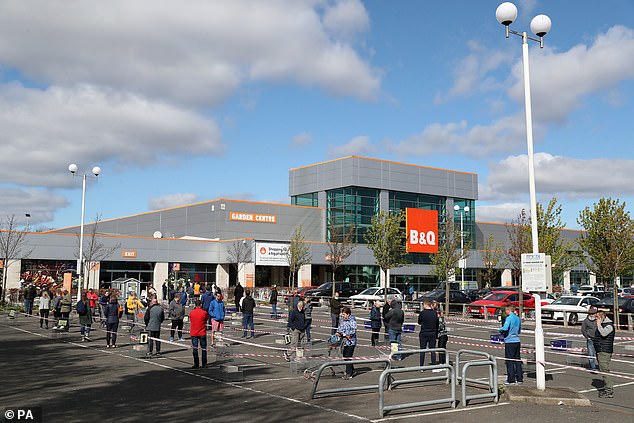 They were seen in snaking queues at B&Q in Edinburgh, pictured above

Each weekend of April – between the 4th and the 18th – the number of people walking, driving, and ‘transiting’ steadily climbed, even as police forces across the country became tougher on rule-breakers.

Data from sat nav makers TomTom and the AA suggest there has been an increase in car trips around the UK this month.

There are more motorists in London, Brighton and Hove, Bristol, Manchester, and Reading out and about this weekend than last week, according to TomTom.

Some wore protective clothing including face masks and gloves.

B&Q is following steps taken by supermarkets by limiting the number of customers in its stores at any one time.

It has also installed screens at checkouts and put markers on shop floors to help with social distancing.

The shopping scenes come after Home Secretary Priti Patel warned Britons it was ‘imperative’ that they follow lockdown rules.

She warned that the country is ‘not out of danger yet’ as she thanked people for their ‘spirit of national unity’.

Police have already issued thousands of fines to people who have flouted lockdown rules, and the penalties could be increased after Ms Patel spoke on Friday to the National Police Chief’s Council.

On Sunday, Foreign Secretary Dominic Raab blasted ‘irresponsible’ critics for demanding the UK government set out how it will ease the nation’s coronavirus lockdown.

Tory donors, Cabinet ministers and Sir Keir Starmer have all told Boris Johnson he must publish his strategy for loosening restrictions as the Prime Minister prepares to return to work tomorrow.

But Mr Raab slapped down those calls this morning as he said Britain is still at a ‘delicate and dangerous’ stage of the outbreak and the focus must remain on slowing the spread of the disease and reducing the number of deaths.

However, the Foreign Secretary, who has been standing in for Mr Johnson, did insist ministers are carrying out their ‘homework’ on how to lift rules in the future but he stressed ‘frankly it is not responsible to start speculating about the individual measures’.

Mr Johnson has been recuperating at Chequers since he was released from hospital on April 12 after his own intensive care battle with coronavirus but he has told allies he is now ‘raring to go’.

The PM will formally return to the frontline amid growing hostility over the government’s repeated refusal to publicly discuss how restrictions will be lifted.

Numerous Tory donors, including billionaires Peter Hargreaves and Michael Spencer, have today broken cover to tell the PM that the draconian measures must be loosened as soon as possible due to growing fears of lasting damage to the UK economy.

Three Cabinet ministers have briefed their own disquiet with some concerned that the British public have now had enough of the restrictions and cannot ‘take much more of this’.

Meanwhile, Sir Keir, the Labour leader, has warned the premier the UK risks ‘falling behind the rest of the world’ in terms of setting out how life will be returned to something resembling normal.

Economists have also warned that a failure to get out of lockdown soon could result in Britain being the Western nation hardest hit by the virus.

The series of major interventions came after the UK’s coronavirus death toll hit 20,000.