Celtic fans interrupted the minute’s applause in memory of the Queen before their game against St Mirren on Sunday by singing anti-Royal chants.

The Scottish FA had left it up to individual clubs to make a decision on whether they wanted to pay tribute to the Queen this weekend following her death earlier this month.

The majority of matches across the UK have seen fans and players observe a minute’s silence and sing the national anthem ahead of kick-off, but this time there was a minute’s applause.

However, chants could be heard over the top of the applause from the Celtic end, as fans sang: ‘If you hate the Royal Family, clap your hands.’

Supporters also held up a banner with the same message, while there were audible boos before the minute’s applause had even got underway.

The Celtic players and manager Ange Postecoglou continued to applaud throughout the minute before the referee blew his whistle to signal that 60 seconds was up.

Following the applause, the national anthem was not played as the game started shortly afterwards. 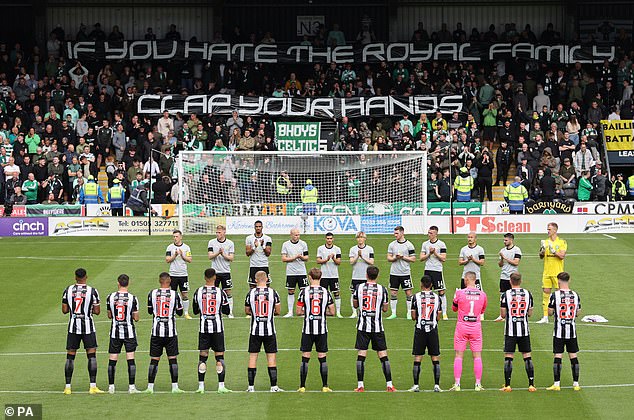 Celtic fans held up a banner which read: ‘If you hate the Royal Family, clap your hands’

The reaction of the Celtic fans comes just four days after they also voiced their displeasure at the monarchy during their side’s Champions League match with Shakhtar Donetsk.

Fans held a banner in the stands that read ‘f*** the crown’, while another message stated ‘sorry for your loss Michael Fagan’.

Fagan famously managed to scale the Buckingham Palace walls before creeping into Her Majesty’s bedroom while she slept in 1982.

The then painter and decorator, who has schizophrenia, spent around 10 minutes talking to the monarch about his family.

The late monarch thought Fagan was just a drunk member of staff, who was eventually tackled by a duty footman.

Celtic’s supporters are not the only set of fans who have disrupted tributes being paid to the Queen this weekend.

Dundee United fans sang ‘Lizzie’s in a box’ prior to their match with Rangers on Saturday, sparking outrage among the home crowd at Ibrox.