Motorists are collectively paying more than £1billion more at fuel stations per month compared to a year ago, according to a new study.

Using average monthly petrol and diesel prices over the last 12 months, it has been estimated that in June drivers forked out a massive £3.44billion – £1.13billion more than in the same month in 2021.

The recent squeeze on motorists’ finances – on top of the cost-of-living crisis – means that almost three in five drivers now say that fuel economy is now one of their major considerations when buying a replacement car.

We reveal some of the most efficient new models on the market right now that could save drivers up to £288 on their annual fuel costs.

Such has been the sizable increase in fuel prices in recent months that the average fuel bill for UK drivers in July rose to a staggering £3.44billion, according to calculations in a new report

The numbers have been crunched by online car platform, CarGurus.

It calculated a monthly cost of filling up using average fuel prices in each of the last 12 months, while taking into account average UK mileage of 616.7 miles per month and average fuel efficiency of petrol (52.6mpg) and diesel cars (56.1mpg).

In June 2021, the average driver of a petrol car was spending £69 on unleaded, while diesel owners were splashing almost £66,, taking the total UK spend to £2.31million, the report says.

This saw the average cost of filling up that month escalate to £73 for those with petrol cars and almost £70 for those driving diesels, amounting to a UK monthly fuel bill of £2.44 billion.

However, the cost of filling up really began to spiral in February on the back of Russia’s invasion of Ukraine and the price of oil spiraling.

Even with the Government’s intervention to shave 5p-a-litre off fuel duty in March in a hopeful bid to help drivers, petrol and diesel bills rose to an estimated £2.71billion – and by April and May it was up to £3billion each month.

June saw all-time record fuel prices achieved, hitting 191.25p for unleaded and 199.02p for a litre of diesel, sending total estimated filling station receipts to a staggering £3.44billion – some 49 per cent higher than they were a year earlier.

After seven consecutive weeks of wholesale prices falling, supermarkets are finally showing signs of reducing their prices, though only by a little.

The RAC says the UK’s biggest fuel retailers aren’t cutting their prices at the scale they should be, given the wholesale prices of both fuels – what retailers pay themselves – have dropped so much.

‘This is one of the worst examples we’ve seen of pump prices falling by a feather despite the wholesale market plunging,’ said Simon Williams from the motoring group.

The price of a litre of unleaded at a supermarket is now 185.15p on average with diesel at 194.16p, almost mirroring the UK average prices of 185.98p and diesel 195p respectively, when they are normally around 4p cheaper.

‘We continue call on all major fuel retailers to go much further in reducing their prices in the coming days to ease some of the burden on drivers during what is the costliest summer ever on the roads,’ Mr Williams added.

For Britons’ wallets, this amounted to an extra £30 a month per driver – equating to £360 over the course of the year, CarGurus said.

The largest month-on-month rise took place between May and June 2022, with the monthly spend jumping by almost half a billion pounds, rising from £2.98billion to £3.44billion.

That said, prices have started to soften in July, with Thursday’s UK average price of petrol and diesel now down to 187.19p and 195.88p respectively.

With such a massive leap in fuel bills in recent months, CarGurus said it was ‘no surprise’ that motorists looking to buy a new or used motor in recent months have placed far greater importance on fuel efficiency.

In a poll of 2,000 motorists earlier this year, 57 per cent said one of the most important consideration for their next vehicle purchase is how frugal it is.

Chris Knapman, CarGurus UK editor, said: ‘Our research further underlines the financial impact the rising cost of petrol and diesel is having on the nation.

‘It is no surprise then that fuel economy is now ranked the most important consideration when buying a car.

‘If drivers are in need of a new car, it’s clear choosing one of the most fuel-efficient models could save drivers hundreds of pounds per year at a time when it’s needed most.’ 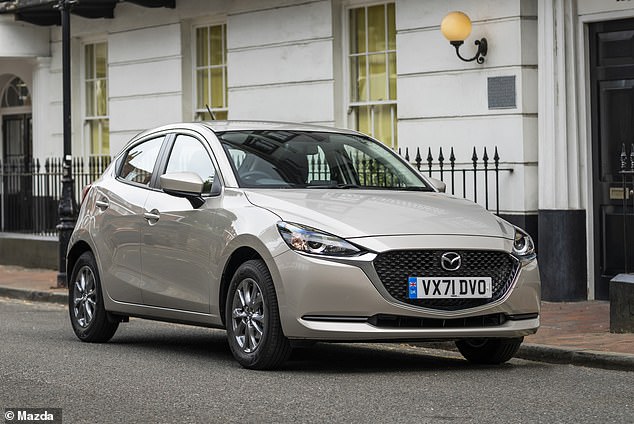 The Mazda2 1.5 90 Skyactiv-G is the most fuel-efficient new petrol car on sale. Even at record-high June unleaded prices, it was cost just over £1,000 in fuel to cover average UK mileage 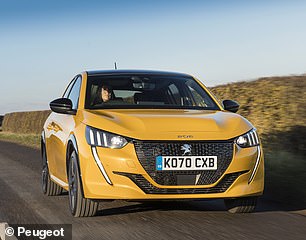 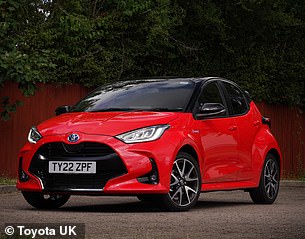 The Peugeot 208 1.5 BlueHDi (left) is the most fuel-efficient diesel model on sale, returning 71.4mpg. Toyota’s Yaris (right) is the most economical new hybrid with a claimed 68.8mpg

To help drivers decide which motor to buy next, it listed the most fuel-efficient new petrol, diesel and traditional, self-charging, hybrid cars on sale right now,

It then worked out how much motorists could potentially save by choosing one of these over a car that returns the UK average mpg, with the costs calculated using the average price of petrol and diesel in June.

In terms of annual fuel saving compared to an average petrol or diesel car, the Mazda will reduce bills by £153, the Peugeot cutting them by £256 and the Toyota offering a potential reduction of £288.

If you want to know which is the most economical model sold by every mainstream car brand today, read our recent report detailing 29 of the country’s most popular manufacturers.